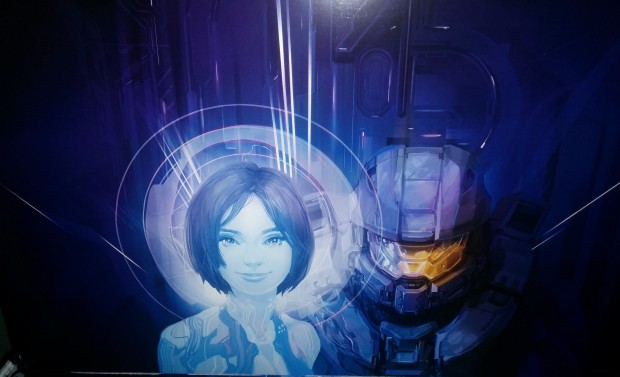 When non-gamers want to point to a symbol of videogames, it’s typically either World of Warcraft, or more commonly, Halo that comes to mind.  Bungie’s title helped to shape modern shooters forever, introducing the world to concepts that persist today. “Combat Evolved” indeed.  The team at Insight Editions has teamed up with 343 Industries to bring some of the best moments in the storied history of Halo to life in Halo: The Poster Collection.  With only 40 posters and countless epic memories to capture, which moments would they chose?

The poster collection is set up in reverse chronological order, starting with Halo 4 and working backwards through the final poster — the cover of Halo Anniversary.   The posters, like their previous works, measure out at 15.9” tall and 11.9” wide, each gorgeously presented on thick stock that lends itself easily to framing and display.  Also like previous installments in their poster series, all 40 pieces are printed on both sides, so you’ll have to choose which to display.

Many of these pieces of artwork you’ve seen many times — they’ve likely been your background for months at a time if you are a fan of the franchise.  The box art covers for the first four Halo titles are included, but like the recently-released Master Chief Collection on the Xbox One, Halo 3: ODST and Halo Wars are not included.  Halo 5: Guardians, Spartan Assault and Spartan Strike are also absent — Insight stuck with the original trilogy and only dipped their toe into The Reclaimer Saga.

Capturing the best moments in the series

The pieces are beautiful, full-color, and evocative.  Looking at the pieces from the original title brought a flood of memories driving the Warthog around the beach while the bombastic theme music hammered away in the background.  Another piece that could easily be from any of the games in the series shows an epic battle with Spartans engaging in a tremendous firefight.  It reminded me of spending long nights running and gunning with my friends at Gaming Trend.

My two favorite pieces are both from Halo 4.  One is a melancholy piece showing Cortana sitting in the frozen ship Forward Unto Dawn as it drifts in the deep blackness of space.  Cortana sits holding her knees, alone, as she waits for the right to reawaken the Master Chief.  In a genius placement, or perhaps entirely by accident, the piece opposite is a watercolor-esque piece showing a now-awake Master Chief and Cortana, an angelic sort of halo above her head.  No sign of rampancy, her melancholy completely dissipated by the presence of a close friend.  I’m not sure why, but the serene look and slight smile on her face just completely captivates me.

The cold silence of cryosleep

The best thing about this poster set is that it doesn’t focus on the CGI-heavy work of the team at Blur, instead showing the eye-opening artwork created by Bungie and 343 Industries.  Each poster vividly captures a moment in time and reminds us why we keep coming back to the Halo series time and again.  The Master Chief walking through the forest with SGM Avery Johnson and his team, the lumbering form of The Arbiter standing tall teamed up with the Chief, the titular Halo Ring silently circling over the planet — each one marks a point that’ll likely stir up memories for fans and casuals alike.

One of the last posters in the book is one of the first moments in Halo — the awakening of The Master Chief.  This piece shows the enormity of the Mark VI Mjolnir armor, creating a 1,000 pound seven foot imposing figure for even the largest of men.  Around the Chief are scientists that hardly come eye to eye with his chest, wires and sensors hanging as they attend to their undisclosed task.  Is this the moment where the Master Chief was first placed into the armor?  Was this the concept for the original scene where the Chief tests his shield and health regeneration in the first game?  I’m not sure, but it’s a pretty cool piece just the same.

The beginning of a legend…

If you are a Halo fan, this is a nostalgic trip through the big moments in the history of the most successful shooter of all time. While the games outside of the main thread are conspicuously absent, there is a lot here to enjoy. Coming in at a shade under $20 bucks, it’s really a no-brainer.

Ron Burke is the Editor in Chief for Gaming Trend. Currently living in Fort Worth, Texas, Ron is an old-school gamer who enjoys CRPGs, action/adventure, platformers, music games, and has recently gotten into tabletop gaming. Ron is also a fourth degree black belt, with a Master's rank in Matsumura Seito Shōrin-ryū, Moo Duk Kwan Tang Soo Do, Universal Tang Soo Do Alliance, and International Tang Soo Do Federation. He also holds ranks in several other styles in his search to be a well-rounded fighter. Ron has been married to Gaming Trend Editor, Laura Burke, for 21 years. They have three dogs - Pazuzu (Irish Terrier), Atë, and Calliope (both Australian Kelpie/Pit Bull mixes).
Related Articles: Halo: The Poster Collection
Share
Tweet
Share
Submit