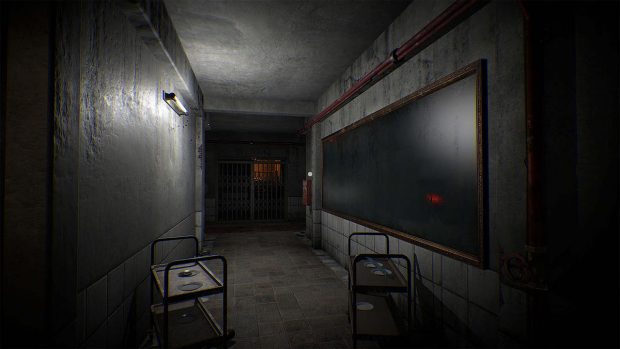 Dying: Reborn actually intrigued me from the first trailer; a first-person escape-the-room game using the PSVR sounded like a pretty fun time, the jump scares looked exciting, and the fish-headed villain added a surreal touch to the whole thing. All that interest almost immediately disappeared once I started playing the game. While some of the puzzles are neat, Dying: Reborn suffers from horrendous bugs, a general lack of polish, and a strange business model that means half of the game’s buyers won’t even see the ending.

Dying: Reborn starts like every other escape-the-room game: you’re locked in a room with no memory of how you got there and need to solve puzzles to find your way out. However, while a lot of games would use this common starting point to try and tell an interesting story, or maybe play with the formula a bit with some plot twists, the story never really develops beyond just trying to escape. There are a few potential threads, such as a missing woman named Shirley who gets mentioned in so little detail that the blurb on the PlayStation store was the only reason I knew she was the protagonist’s sister, but there’s no resolution. Or maybe there is in the ending, but that’s another story, as I’ll explain later.

The characters are mostly forgettable, but fish-face here leaves quite an impression.

The puzzles in Dying: Reborn aren’t particularly challenging, but a few are pretty original. While a lot of them are pretty simple, like using a crowbar to pry a painting off of a wall or cleaning graffiti up with a soaked rag, there are a few genuinely interesting ones, such as a puzzle involving a radio in the second level that actually requires some pretty clever wordplay to solve. But those puzzles are few and far between, and they’re overshadowed by the bugs that break up the experience. I had to restart the game twice in the first level alone because button prompts occasionally fail to appear if you solve puzzles out of order, and there’s no indication of what that order is.

When they aren’t glitching out, the environments look alright but aren’t anything you haven’t seen in every horror game ever.

The glitches are just a part of the game’s general lack of polish, which is incredibly apparent in the game’s sound design. Audio cues cut off at random for no visual reason, and there’s a distinct lack of ambient noise. The voice acting is also pretty poor, with the protagonist failing to show any emotion other than “slightly inconvenienced.” The fish-headed villain, however, is the exception and is entertaining in a hammy, overacted sort of way. What’s more, in comparison to the character voices, the sound effects are deafeningly loud;I dreaded accidentally combining the wrong objects because of the obnoxious “clunk” of failure.  The visuals also aren’t much better; in one case, the graffiti sprayed on the wall was hovering a few inches away from it. In one area, it became painfully obvious that certain puzzles weren’t designed with the PSVR in mind, as the camera clipped through an object when I tilted my head to read a sheet of paper in game.

Speaking of which, Dying: Reborn is also very poorly optimized for the PSVR. While i didn’t encounter any frame rate issues, the loading screens were extremely long, to the point where I almost thought the game had crashed. It also made a scarily loud whirring noise while playing, and where I didn’t feel comfortable playing for long periods of time for fear of overheating my PS4.

There’s a missed opportunity to tell a story through the games environment, but none of the little details serve any purpose aside from looking creepy.

A common criticism for a lot of the early PSVR launch titles is that certain games feel more like demos than full experiences, and that’s the main problem with Dying: Reborn. In this case, however, the comparison to a tech demo isn’t a slight about the PSVR version of Dying: Reborn’s short length or lack of depth; you quite literally pay for a demo, with the full game available on PS4 and Vita costing twice as much as the PSVR version.  The PSVR version, which is the version I played for review, includes only three short levels and doesn’t even get a proper resolution—it just ends. It’s possible that some of my complaints regarding the plot are addressed in the full version of the game. However, considering the general low production values of Dying: Reborn’s PSVR version, I have no desire to see if any of the issues are addressed in the full version of the game.

Dying: Reborn is the worst game I’ve played on the PSVR. It’s a broken, glitchy mess that not even a few admittedly well designed puzzles can make up for, and while the PSVR version may cost less, the heavy amount of cut content means you aren’t getting a deal, you’re just paying for a demo.