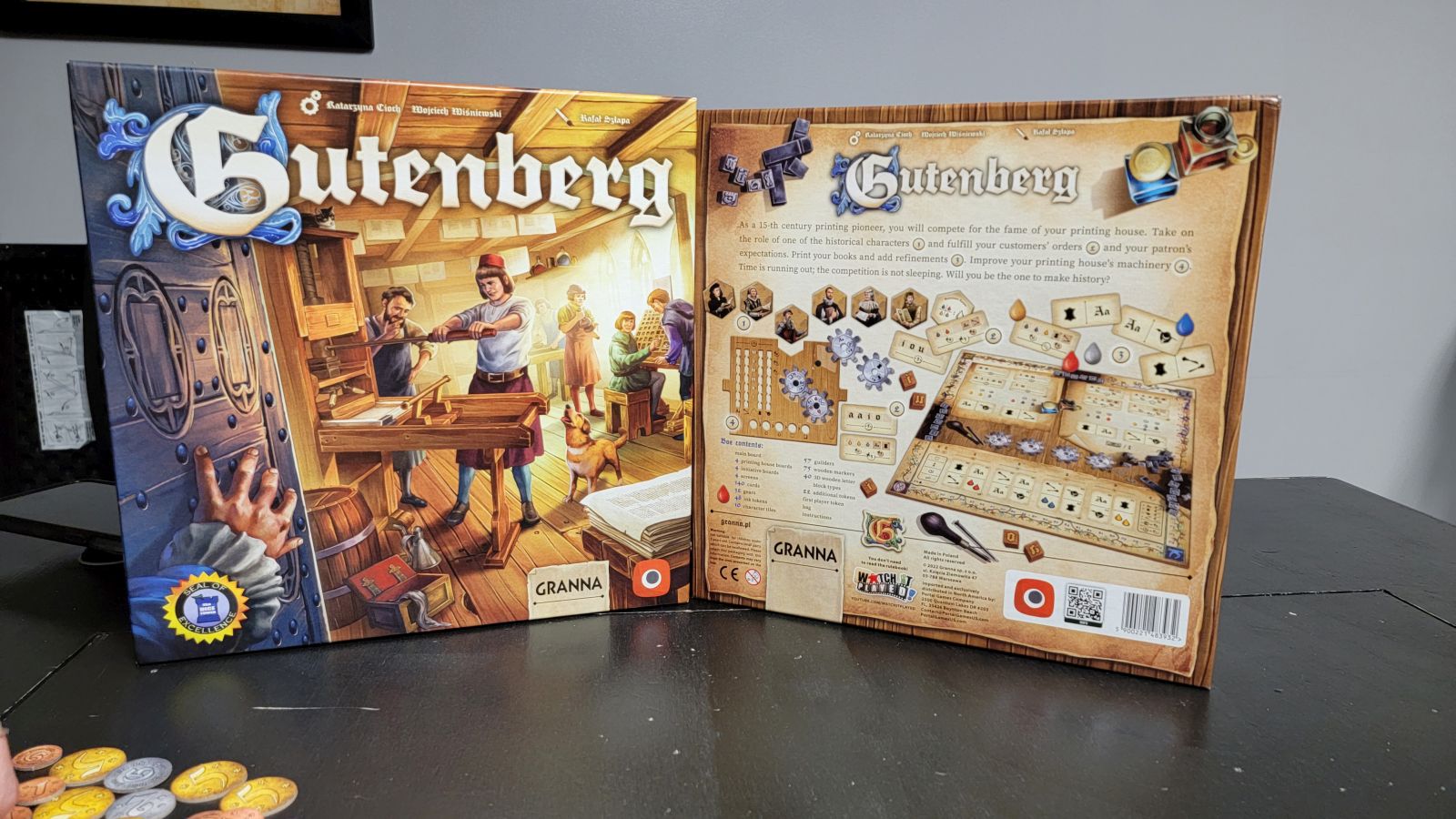 The advent of the printed word was an astounding revelation for the world. What once started out as hand copying illustrations and books has now become something as easy as pushing the print button and seeing the results almost instantaneously. We see the fruits of those labors today via board games, whether it be rulebooks, cards, or game boards. None pays homage to this part of human history more than the worker placement board game Gutenberg by Portal Games. Designed by Katarzyna Cioch, Wojciech Wisniewski, and art by Rafal Szlapa, Gutenberg is a game for one to four players that puts players into the shoes of Johannes Gutenberg himself.

In the game of Gutenberg players take on the roles of Johannes Gutenberg and his peers during the advent of the printing press. Over six rounds of play, players will work to complete orders of letter types, and inks, gain gears for their presses, advocate for more orders, and work to increase the proficiency of their printing presses. Lastly players may receive assistance from various patrons in the game. While primarily having action selection functions each round, the game boils down to efficiently completing orders and receiving patronage. 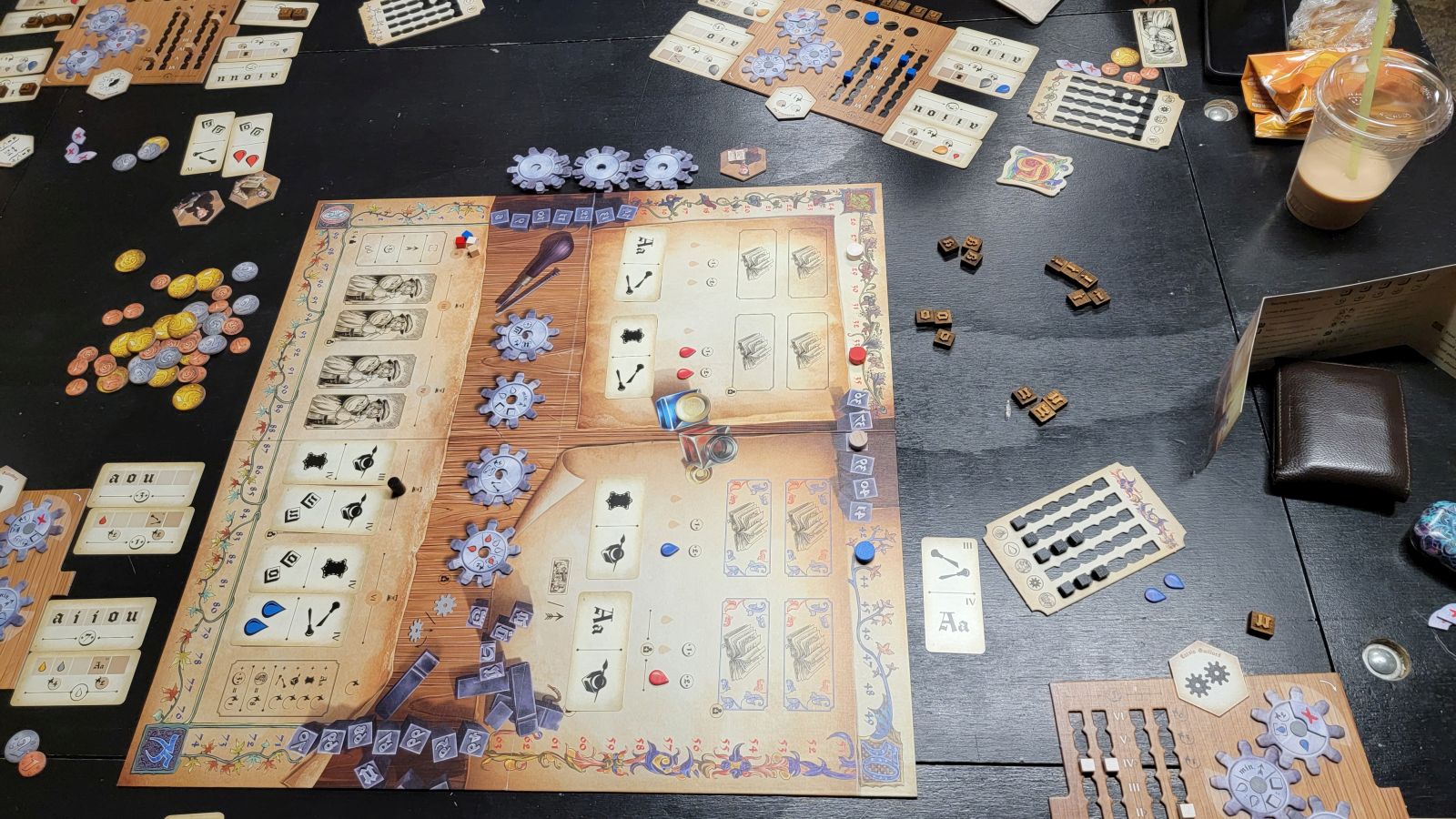 Gutenberg presents a unique format that is a breath of fresh air for a board game. While most games have your worker selection, or your action selection on the board, Gutenberg offers a bit of a betting/auction selection mechanism that keeps things tense. Fundamentally this can ruffle a few feathers and cause players to really miss out on something they desperately need to build the prestige of their printing press. What it really does however is ensure that not everyone can abuse the system and just steamroll someone continually turn after turn by ensuring equal opportunity through turns. If we look at how this system functions, it is quite simple, but can definitely make decisions difficult.

Each round, you can choose to take actions from five actions.. Each action has an equal amount of importance throughout the six rounds of play and ignoring one action could spell trouble for the rest of the game. Those actions are: gain orders, gain proficiencies, gain ink, acquire gears, and receive patronage. What makes this mechanism fun and interesting is in order to take any of the five actions, players have to bid up to six cubes on any given action. This means that players can put zero cubes if they wish to not take an action and at least one if they wish to take an action but do not care about turn order. 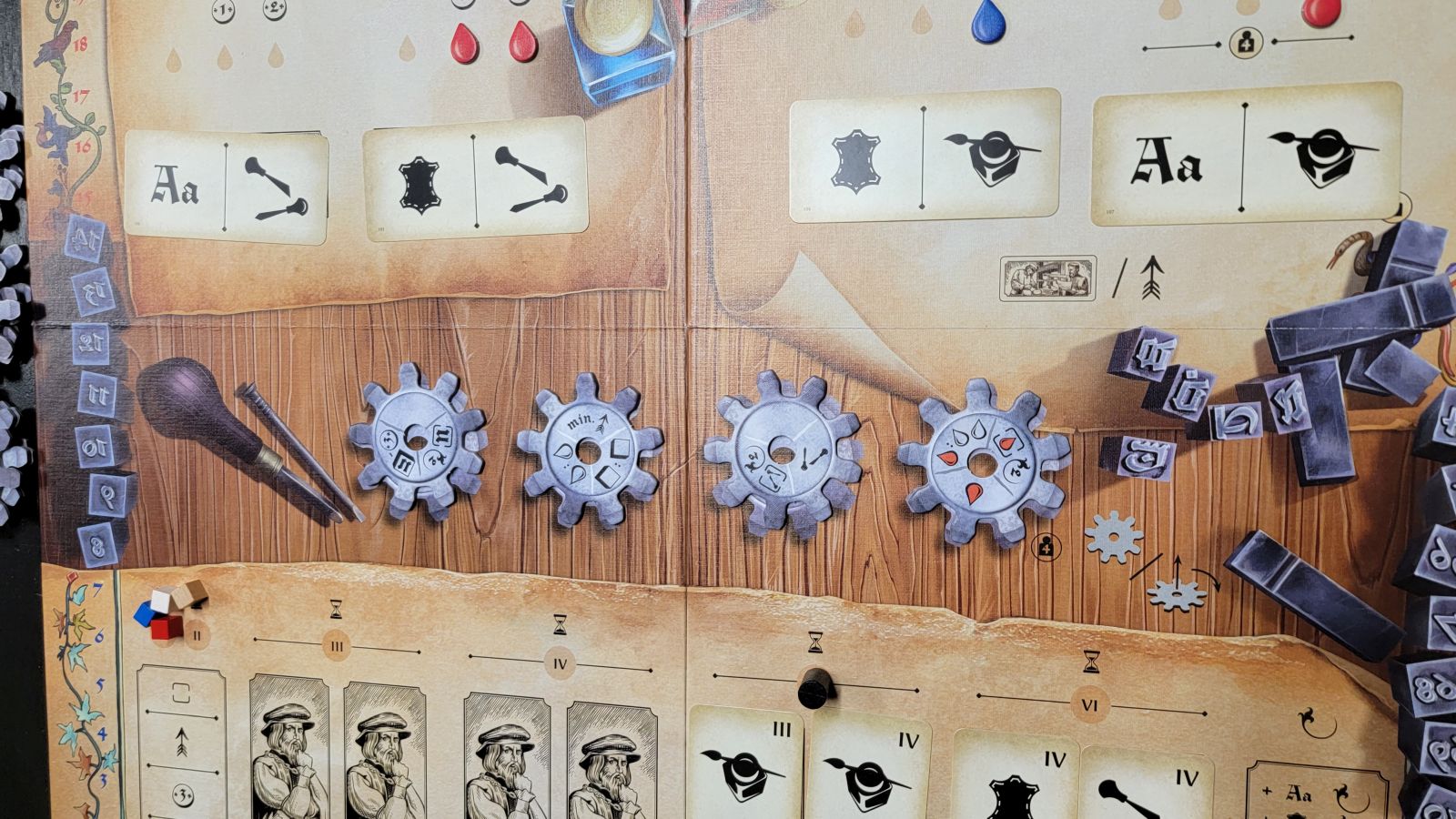 But wait, if players can use up to six cubes to bid on actions in order to get priority in actions, how do they not bid more for each action? Well here is where the game divvies up an amount of cubes to each player based on who is first player for a round. For example in every round the first player of that round will only have seven cubes to bid on actions with. Second player will have eight, while the third player has nine, and lastly the fourth player receives ten cubes. So while you may go last in a round, you potentially have a better advantage with more cubes, meaning you can bid more in order to go first in either one action, or in multiple actions. This can become increasingly important if you need a specific ink, or proficiency, or gear to make your entire engine run.

Having covered the action selection system, the individual actions are really what drive Gutenberg forward. The orders you get and have the chance to fulfill during the game are one of the main functions of success. Orders will have requirements of the four letter types available in order to be completed. There are also refinement cards that automatically come with orders when you take them. These refinement cards are where you can use inks to increase the rewards you get for completing an order card.

Taking ink is fairly straightforward. There are up to four sets of three inks to take; the first ink in each set is always free, however the other two in a set must be paid for if you desire more ink. You must also take from only one of the four groups of ink in a round, and cannot cherry pick from multiple different groups during the game whatsoever. 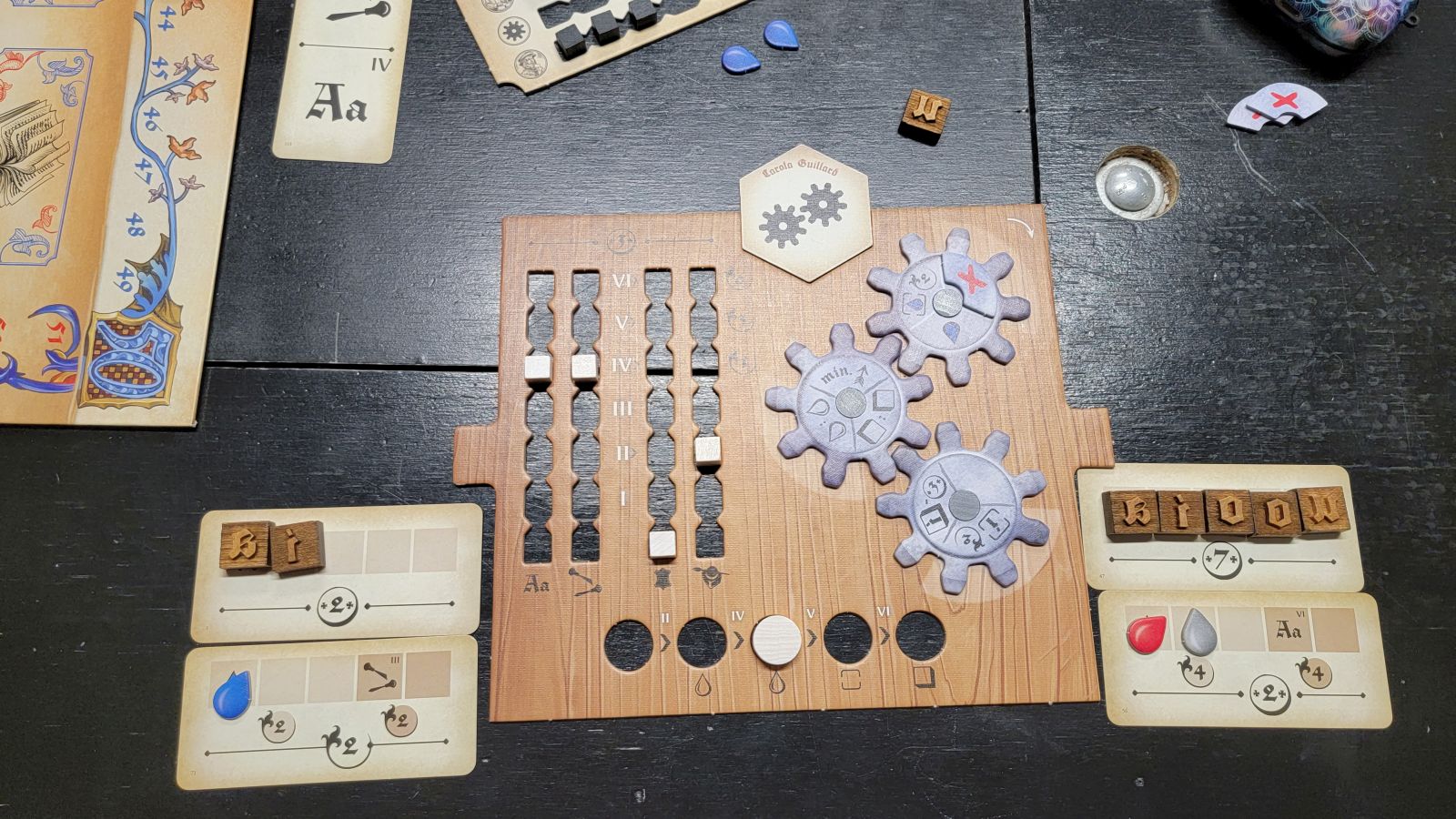 Gears offer extra bonuses that make your point scoring and resource gathering/trading more efficient. While there are many gears, the gears themselves have multiple spaces on them and during each round will rotate to offer new bonuses. What makes the gears fun and unique is multiple functions such as ink exchange or more points for using certain letter types. This means however that you have to time completing an order if you want to use a gear that gains you more points for certain letter types or inks.

Lastly is receiving patronage. While all of the other actions strengthen your engine/printing presses, here players receive extra help/rewards for not doing a whole lot. For the first couple of rounds players only receive things such as ink, or money. However as of the third round and on, players may now vie for the patronage cards offered if they have completed the prerequisites on those cards. These cards at the end of the game wind up being worth a whopping eight points a piece. While that may not sound like a lot to you, having multiple of the patronage cards adds up fairly quickly and can definitely be a deciding factor. 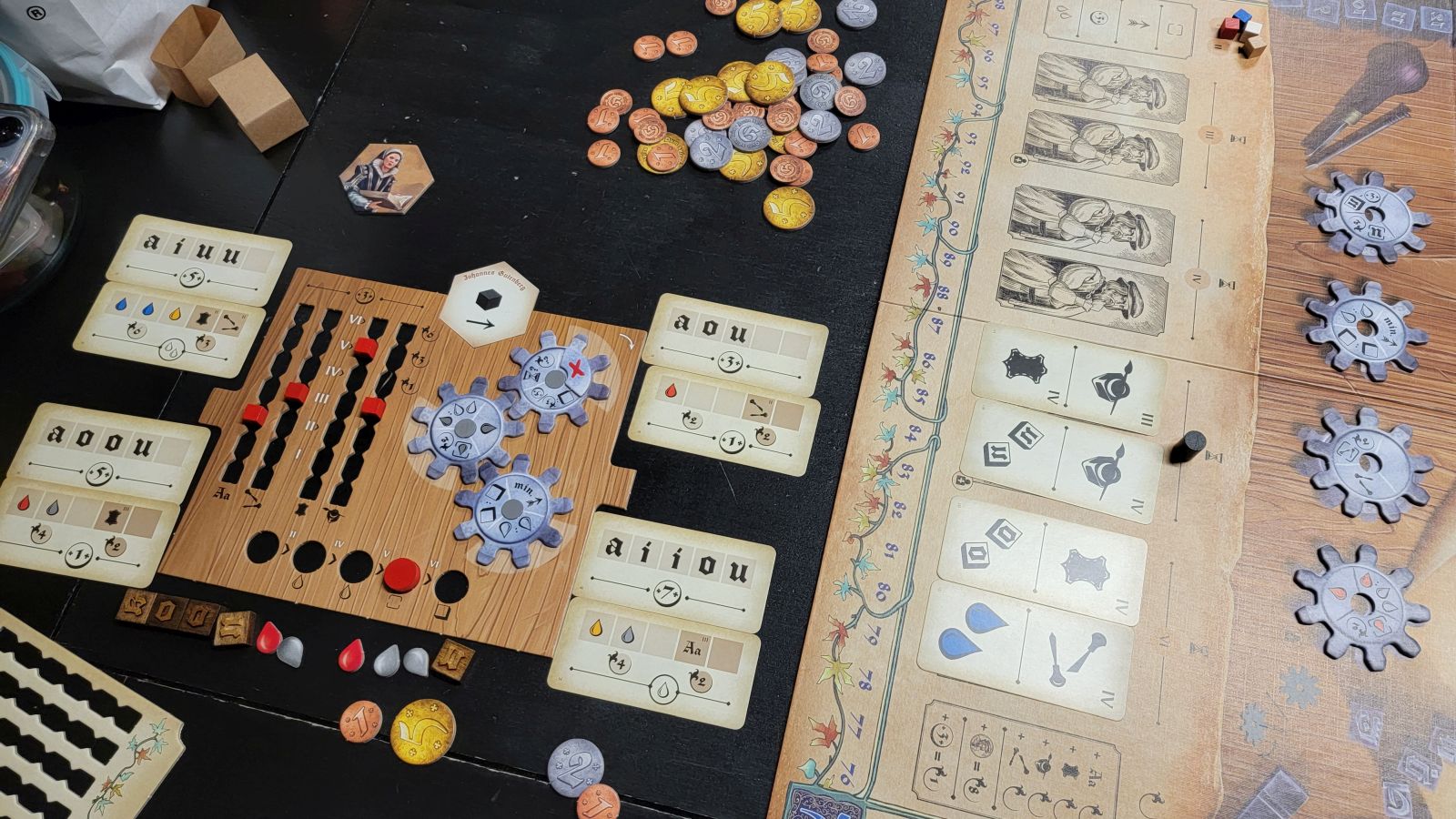 All of these actions tie the whole game together and immerse you in becoming the best printing press/pioneer of the industry. As one of the players you might often find yourself struggling to choose the right amount of cubes for actions, gambling whether you could go second or not.

What Gutenberg brings to the table compared to other games it might be similar to, is its unique desire to make turns as fair as possible, and as unique and fun as possible. Each round changes with cubes being given to the new “last” player of that round in order to constantly make sure each player has turns as first all the way through to the last player. With the many different orders, and gears, and specialties, players will simply not stop at just one order or one specialty, but instead continue on until they have completed as many orders as possible, proving their printing press reigns supreme.

While Gutenberg has lots of positives, there are a few things that could be improved. Adding some extra copies of letter types would be very beneficial as it is easy to run out at times. Offering some different upgraded form of money, whether it be metal or would, or something a little more thematic would be a much needed quality of life upgrade. Dividers in the storage boxes would also help. Games can run a bit longer than they should, a bit due to some analysis paralysis, some due to upkeep between rounds and initiative order choosing in a round.

In my time with Gutenberg, I dove in quickly, and often. Many times in the past games have easily been forgettable, but not Gutenberg. While sometimes players getting actions before you can take them can be frustrating, there is enough wiggle room to change things up and adjust what you were planning, because seeing another player go for what equates to the same strategy as you, can have dire consequences. This can hold especially true with the patronage cards if you can see them in advance. This also holds true based on turn order, and initiative order during the round. And we cannot forget about the aesthetic design of the game. The inks are vibrant, the gears fun and useful, and the letter types, tactile and absolutely beautiful. While the components look impressive, most of the components are made of your standard cardboard, and offer little in the way of additional durability, the storage however is excellent. Offering many labeled boxes of where to store each component for ease of access and set up.

Ultimately Gutenberg brings a beautiful aesthetic to the table that tells the story of the printing press and endears anyone who has a love for the written letter to play this game. From its many different actions, to how bidding for the actions and initiative works, to competing with others for points and to complete orders and receive patronage first, this game offers many different looks at what can be considered a fantastic game that just about anyone who has an interest in heavier board games can enjoy.