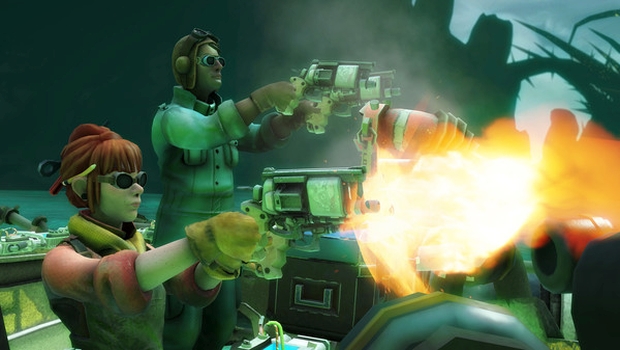 The west is a lawless place. Even in the steampunk Western Hover Junkers, your only friend and companion is the gun strapped to your side and the horse you rode in on. Luckily, your horse is a giant hovering platform of metal that can block a decent number of bullets. Of the many different VR experiences available on the Vive right now, Hover Junkers stands out as one of the more memorable and engaging games, and certainly one you’ll boot up more than a few times.

Hover Junkers’ core concept is to simply put you in a hovering pile of junk, hand you two guns, and let you go at it in either deathmatch or team deathmatch. It’s simple, and the gameplay reflects that, offering only a six-shooter pistol and triple-barreled shotgun for firepower, as well as a remote or open hand to conduct non-combat mechanics.

It’s the physical feel of the game, mirrored in your Vive remotes and headset, that turns an otherwise slim shooter into an intense experience. The room-scale tracking of the Vive detects your movement throughout the area, including ducking, leaning, and even leaping. When bullets start flying, you don’t hit the cover button — you have to literally duck down behind the cover surrounding your junker, peeking out to pop off a few rounds before returning to the safety of your cover.

The physical feel to the gunplay is truly satisfying.

The equipment lends itself well to this physical shootout, as each gun is only as accurate as your aim. You can take your sweet time and line up the crosshairs for a perfect shot, or equip two pistols and John Wu your way out of a sticky situation. Either way, accuracy is purely on you, as is reloading your weapons. Alongside having to aim your guns without assistance, you have to manually reload your guns, which can lead to some incredible moments. The feeling of manually flipping open your revolver, spinning your thumb on the trackpad to load the cylinder, and then flicking your wrist to lock it in as you pop up for six more shots is empowering, and a joy to master. Shotguns have a similar reload, as you flip open the barrels and lock shells in before flipping it shut.

While the guns are all kinds of fun, there’s a deeper element to Hover Junkers than just speeding around, shooting wildly into the Western wastes. You can select different junkers, with different sizes and cover distributions. I was a big fan of the dumpster, which had a significant amount of junk in its massive green-dumpster trunk, making for a great deterrent to would-be backstabbers.

This lovable bot manages the bar where you select matches to join.

Your in-game remote comes into play here, as it both steers your Junker, and lets you pick up and place collected pieces of junk around your ship for extra cover. Before rushing into firefights, I’d debate which side to have heavier cover on, where to put my portholes, and which side I wanted to approach enemies while assaulting their junker. You can build some incredible ships to roam the wastes, though they might be a little less visually impressive than modern shooter experiences. Some fidelity is sacrificed for gameplay on all but the beefiest rigs, though this does mean Hover Junkers doesn’t suffer from any nausea-inducing framerate issues that plague other titles. The visuals aren’t top-notch, but they’re clear enough to understand the action happening around you, and the slight reduction helps keep the framerate steady in big firefights.

All of this plays into a grisly, brutal shootout — rounds are limited solely by kills, but anything goes during that time. There’s no official “behind cover” status that will save you from a hail of bullets, and opponents will often look for any small hole they can blast through to get at you. During one match, I was literally crouched on the floor, one hand up on the controls steering and the other holding my trusty shotgun. Steering circles around two enemies who had tried to gang up on me, I was peering out of holes between metal rebar and wooden planks to see where I was going, until I steered myself right next to an enemy ship. Once the bullets stopped, I popped up and leaned over, into the enemy junker, and unloaded my shotgun’s three-round burst directly into them.

Team deathmatch puts you in either the driver or passenger seat, leading to some intense drive-bys.

Was it brutal? Yup. But the cartoony aspect of the game and the focus on the wonder of actually enacting these horrific drive-bys of each other overcame the surprisingly visceral nature of Hover Junkers. In lobbies and matches, teammates congratulate each other and suggest flanking maneuvers, either through their mics or just hand signals. Most people in Hover Junkers are just excited to be playing Hover Junkers, and that’s saying a lot for any multiplayer game nowadays: that its players are having fun, rather than trolling or complaining.

This free-form combat and overall jovial sense of VR-related fun is what makes Hover Junkers so enjoyable to jump on and lose an hour or two in, whether you’re dominating other junkers in multiplayer or just doing some target practice in the range. If you own an HTC Vive, there’s really no reason to not be playing Hover Junkers; it’s easily one of the best experiences available on the headset.

Hover Junkers is a good game markedly improved by its VR components, utilizing room-scale tracking and motion sensors to craft physical, engaging shootouts. If there was any killer app for the Vive, it’s Hover Junkers.