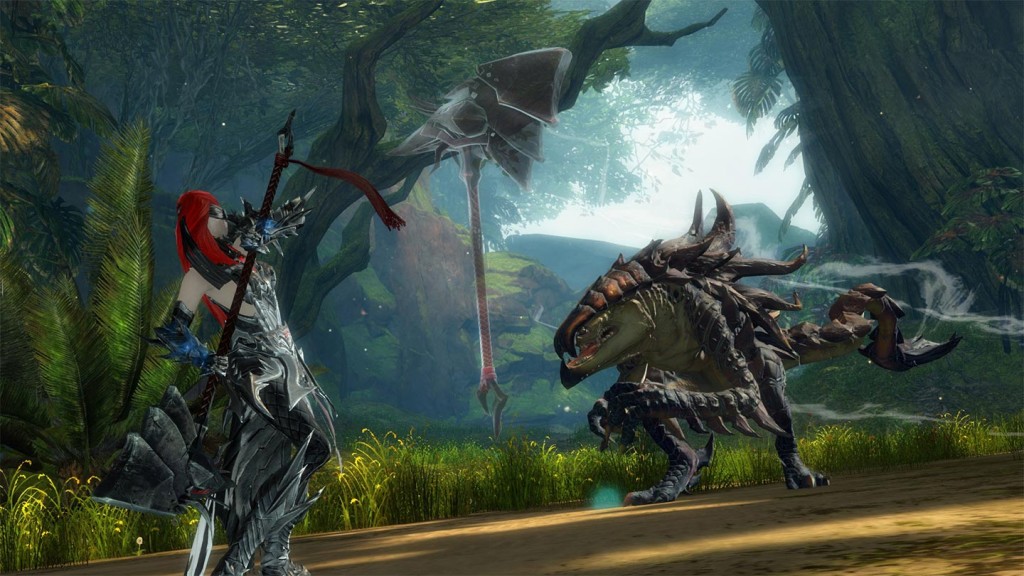 Originally launched in August of 2012, Guild Wars 2 has always been an MMO with its own way of doing things. It charted a course between both the subscription-based and traditional free-to-play pricing models, instead providing an MMO where the box was a must-have one-time purchase, followed thereafter by free regular content updates. It broke out of the Holy Trinity party model of requiring a healer, tank and DPS, for a more free-form experience. Still standing out as unique in a field where repetition is more common than not, the team at ArenaNet has finally released a full-fledged expansion for Guild Wars 2 in Heart of Thorns – a must-have expansion for any players currently dedicated to the Guild Wars 2 world.

Pikachu, I choose yoU! Ha ha, just kidding, that rat would be devoured in a heartbeat.

First up, let’s look at what Heart of Thorns is really offering. The storyline picks up where the ‘Living World’ adventures of Guild Wars 2’s base game left off: there’s a new dragon in town, stirred out of slumber by the machinations of the now-deceased Scarlet Briar, and the world is trying to cope with the unexpected threat. Political alliances, personal relationships and backroom dealings continue to unfold, as various parties – good and evil – search for ways to turn the events to personal and factional advantage. Underneath the veneer of plot development, Heart of Thorns injects a considerable amount of content into an already content laden game: four new, huge open world maps. The revenant, a brand new heavy-armored character class with powers borrowed from the world’s greatest heroes of the past. The mastery system, which opens up additional end-game character development that provides account-wide boons. Revamped and enhanced PVP options (both World v World based as well as structured), an elite specialization system which adds new gameplay styles and weapons to every character class, and more.

A real laundry list of new features, all of them enticing.

The mastery system tops the list of features, particularly for seasoned players. Unlocked at level 80, Heart of Thorns provides four ‘tracks’ of mastery points investment for the new world, and three for the old. Each of these tracks can have points spent on them to unlock new abilities for the player’s characters, some of which are necessary just to progress deeper into the game’s content. Investing in the gliding track allows the player to unlock new mobility options in Heart of Thorns, a prerequisite for simply reaching some of the new areas. This is a bit different from how it used to be in Guild Wars 2, where in principle a character could make it to any region of the map they cared to, so long as they could avoid being squished by roaming monsters in between Point A and Point B. Controversial, no doubt, since it takes a really considerable amount of experience to unlock the tiers completely. On the other hand, mastery unlocks are account-wide – fulfill the requirements once, and thereafter each of your characters on that account will have access to the abilities at level 80. It’s content gating, but personally I think it’s well done.

Attractive yet functional – gliders are a must for the new, very vertical areas.

Almost as exciting is the addition of elite specializations, allowing each character class not just a new weapon to play with, but a new playstyle to go along with it. The warrior’s new berserker specialization unlocks torches for use, allowing the character to explode into a whirl of fire-spewing rage. The thief, on the other hand, picks up the use of the staff with the daredevil specialization, emphasizing acrobatics and greater dodge abilities to deal with threats. There’s a whole new option for each of the character classes, including the brand new revenant, and the system further enhances something that has always been a major strength of Guild Wars 2: character customizability. Speaking as someone who played a warrior to level 80 long ago, it’s always been possible to create radically different playstyles within the same class based on weapon and skill choices, from a rifle-based glass cannon with a powerful piercing/bleeding shot, to the old standby of a light-on-damage, heavy-on-defense tank with a shield and sword in hand. The new abilities and weapons combinations only intensify this, and it’s hard to think of anyone who would complain about having yet more options at their disposal.

There’s a whole lot more that Heart of Thorns adds to the Guild Wars 2 experience, ranging from the construction of Guild Halls and enhancements to guilds in general, to brand new PVP mechanics both in the structured and WvW settings. The new Maguuma areas manage to set themselves apart from the rest of the world, having a very distinct ‘vertical’ feel to them, rather than simply feeling like an exotic but ultimately similar experience compared to the rest of the world. Those areas themselves have a heavy emphasis on chained events, requiring players to band together and do their best to cooperate in taking down progressive series of challenges – and as any raider can tell you, success is not always guaranteed, but feels great when it’s achieved. On top of this absolute load of new features comes the ArenaNet track record of continuing to add to and enhance their game over time. As someone who’s on and off played Guild Wars 2 since release, at this point it’s fair to say that they are entirely reliable when it comes to providing substantial updates over time, continuing their storylines and building their world. I see no reason to think Heart of Thorns is going to be a different experience in that regard, and the reputation they’ve made for themselves on this front is one of the biggest selling points of the game.

Bundled up on a branch. Everyone is one errant elbow away from a long, long fall.

There’s a lot more that could be said about Heart of Thorns’ content additions, but this much needs to be said. Far and away most of these content additions are going to appeal to current and reasonably invested players of Guild Wars 2. Most of the new content is made with experienced players in mind as opposed to the brand new, who would mostly be boggled at all of this. The main enticement for brand new players is less a feature of Heart of Thorns itself than a side effect: the Guild Wars 2 base game is now free to play, without even the purchase of the box required. That means anyone truly new to Guild Wars 2 is going to have a whole lot of content to go through before they even need to consider whether the additional features brought about by Heart of Thorns are worth the investment. On the other hand, for those current and experienced players, the main points of interest about this expansion can be boiled down to two question: Is there a substantial amount of content added, worth the admission cost? And did it all get implemented reasonably well, as opposed to erupting in a massive ball of broken features and bugs? I think it’s fair to say the answer is ‘yes’ to both of these questions. There’s a ton to do here, and it’s working as well as can be expected for any MMO. Whatever bugs and balance issues there are will be hammered out over time, as is the constant fate of any MMO.

For experienced players of Guild Wars 2, picking up the Heart of Thorns expansion is a no brainer. For those of you who may have fallen out of the game in the past due to a lack of content, Heart of Thorns makes the game worthy of a second look: there’s new enemies to slay, new abilities to acquire, and new massive open world zones to play around in, so long as you can reach the relevant parts with the new mastery-based gliding unlocks. For those of you who’ve never experienced the Guild Wars 2 world before, Heart of Thorns is more of a future possibility than an imminent draw for you. But since the base game has gone entirely free to play in preparation for its release, finding out for yourself if this game will fit your tastes is as simple as downloading, installing and playing. Ultimately, Heart of Thorns delivers on everything an MMO expansion should, and does it in a way that stays true to the general unique feel of the Guild Wars 2 experience. If there’s more to ask of an expansion than that, then it’s news to me.

Guild Wars 2: Heart of Thorns offers everything a seasoned player could want in an expansion, and more. Coupled with ArenaNet's track record of continuous free updates, it should be an automatic purchase for anyone at or near the max level.

Victor Grunn has been a gamer since the days of single-button joysticks and the Atari 800XL. When not lamenting the loss of the Ultima series or setting people on fire in Team Fortress 2, he's an aspiring indie game developer and freelance writer.
Related Articles: Guild Wars 2: Heart of Thorns
Share
Tweet
Share
Submit