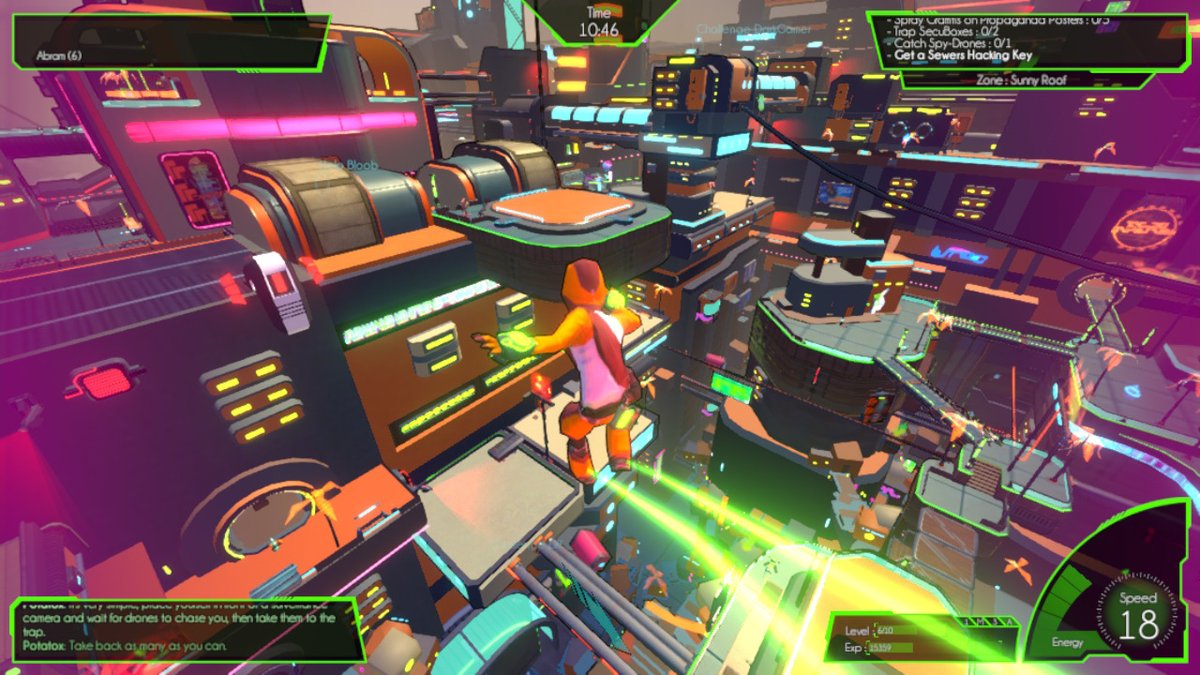 Unfortunately, Hover is a classic case of a good game built on a shaky foundation. In general, without competent mechanics, the surrounding game can be excellent, but the entire experience will falter as a result. Unfortunately, the movement systems in Hover simply aren’t good enough to hold up the game’s incredibly fast, parkour-themed action. That doesn’t mean that everything here is bad—far from it. It simply means your enjoyment of Hover’s, admittedly great systems and aesthetic will largely be dictated by your ability to put up with these issues.

Platformers cannot thrive without good movement, and the same applies to parkour games, the latter of which characterizes Hover. The entire crux of the title’s gameplay is running, jumping, and grinding across various surfaces. Where things go astray is the fact that the developers didn’t extend an olive branch to the player. Consider Insomniac’s recent title, Marvel’s Spider-Man. A large part of the reason why web-swinging works so effortlessly in that game is because Insomniac actively works to maintain the player’s momentum. Hitting the side of a building should kill the player’s chain of movements, but in Spider-Man, you just begin running along a wall. As long as you’re generally close to a surface, Spider-Man will interact with it. The game doesn’t expect perfection, and Insomniac will pull the player along to make sure they aren’t getting stopped constantly to rebuild momentum.

Hover is nearly the complete opposite. Nothing about the movement here feels fluid or generous. You’ll constantly find yourself sliding off surfaces, missing jumps by a hair or two, or simply flubbing it up, totally breaking your combo and losing score. Losing momentum is so much easier than gaining it, and when combined with Hover’s rather floaty jumps and poor camera control, there was a lot of time where I found myself fighting the game’s systems rather than rising to any sort of actual challenge. Some magnetism on surfaces like rails, narrow platforms, and ledges to keep the player moving forward would go a long way.

This problem is only compounded by Hover’s large, open areas which aren’t well suited to how particular the game’s movement systems are. Running around the game’s opening area left me with a very bad impression. Everything was simply too close, too small, and too hard to land on. While the game does have a very nice time-rewind feature that takes the edge off a missed jump, the lack of any magnetism was acutely felt nonetheless. Rewinding time will decrease some backtracking, but it’ll also drain your energy and kill your momentum. On the flip side, the energy system is one of Hover’s best aspects, and where the movement actually feels good. As you keep up your momentum and chain rail-grinds, flips, and jumps together you’ll build up energy. This can be used to springboard yourself off the ground for a sudden burst of height and speed, which’ll open up even more possibilities. When you can get a good run going, Hover feels great—uncontrolled, but adrenaline-pumping.

I’d liken this most accurately to Sonic the Hedgehog. When you build up speed in Sonic and you’re blazing through Green Hill Zone, the game is twitchy and fun, but not entirely refined. Of course, that pure speed and loose feeling of control makes up for the lack of precision, sort of like clinging for dear life to an inner-tube. But when that enemy, those spikes, or that platform hits you and you’re back to square-one, the game loses a lot of its appeal. The same goes for Hover, when you’re speeding along the game is very fun, but that fun never lasts too long because of how unrefined the core movement is.

Not only is the movement unrefined, Hover’s general design is unrefined as well. As I touched on earlier, the more open, explorative areas in Hover simply aren’t that well adapted to movement, but on the whole, level design hits more than it misses. Conversely, Hover’s control and UI miss nearly entirely. Hover bizarrely maps multiple actions to the same buttons, but places a single action on two different buttons, further complicating and diluting control. In terms of user interface and experience, the game is just a cluttered mess. There is absolutely too much information clustered around the game area (further aggravated by how oddly close the camera is to the player character) which is by and large not helpful. Likewise, a lot of important information is trapped behind pause menus bogged down by a horribly sluggish cursor that makes navigation a chore. In-game, the process for finding side-objectives and main quests is just as much a chore, dictated by a bizarre scanning system and useless arrow which don’t clarify anything for the player.

With all of that said, Hover’s issues are mainly systemic—and are surrounded by quite a bit of very good content. Unquestionably, the best part of Hover is its side mode called Gameball; essentially, parkour basketball. You’ll be placed in an area full of grind-rails, air ducts, and platforms to rip around, trying frantically to throw the Gameball into the score zone while your opponents try to slam into you and steal the ball. This is such frantic fun that I’m surprised it isn’t a full game itself. Again, it is plagued by those same movement issues, but frankly, in this context, I didn’t even notice. The slipperiness and floatiness just added to the absolute chaos on screen, and I loved every round of this mode that I played. The feeling of taking the ball from a no-holds-barred tussle and breaking away, just to use an air duct to soar through the air, hit a grind rail, jump off, and dunk the ball for a point is just awesome.

The game also has solid mission variety and unique character progression. While these mission archetypes are largely familiar, they do provide a wide range of activities to complete, and these missions award computer chips, which can be plugged into your character to upgrade various skills, organically raising and lowering them based on the rarity of the chip. Considering that new, stronger chips can be attained by achieving better mission scores, there is great incentivization to improve. These stat boosters feel legitimately impactful with regards to gameplay as well, which truly made upgrading the character worthwhile.

All of Hover’s systems and mechanics are wrapped up within a cell-shaded, punk world that ties the entire game together. The aesthetic weaves together aspects of Jet Set Radio, De Blob, and surprisingly, Borderlands. I found its vibe, although cheesy at times, funky and enjoyable. That sentiment is mirrored regarding its music. While some tracks did become grating after a while, I found most tracks catchy and engaging. The melding of styles and sounds works very well here in my opinion, and I was consistently engaged by Hover purely based on its aesthetic.

So, the question remains, how much do these design issues impact the overall game? Well, personally, I think that impact is pretty severe. In terms of my gaming tastes, a title’s mechanics and design are what I deem most important, and when they don’t feel up to snuff, I have a fairly large problem with the game. Keep in mind, Hover’s mechanics are far from broken, they just don’t feel polished enough to facilitate the moment to moment gameplay. The poor UI just compounds this issue in my eyes, further lowering the game in my estimation. For as much as I love Gameball, and for as much as I think the title has great mission variety and aesthetics, I keep returning to my personal issues with the game’s core. If you can get around the problems at the core of Hover, I do believe there is an enjoyable game here. However, all things considered, Hover simply needed more time in the oven.

Hover is a game with fundamental design and movement flaws that limit theoverall appeal of the game. However, surrounding these problems is a great universe that is matched by solid mission variety, a unique level-up system, and interesting energy mechanics. In addition, the game’s robust basketball-parkour mode, Gameball, is an absolute highlight, and offered the most fun Hover has to offer. Depending on how much these design issues affect your enjoyment will largely depend on what you prioritize in games, and as such, Hover is difficult to give a blanket recommendation.

Abram is an aspiring games journalist with a soft-spot for titles published by a particular company that starts with N, and ends with -intendo. When he's not playing, or writing about, video games, Abram is most likely ranting to no one in particular about various films he's seen, or grabbing the sketchpad to do a bit of drawing.
Related Articles: Hover
Share
Tweet
Share
Submit