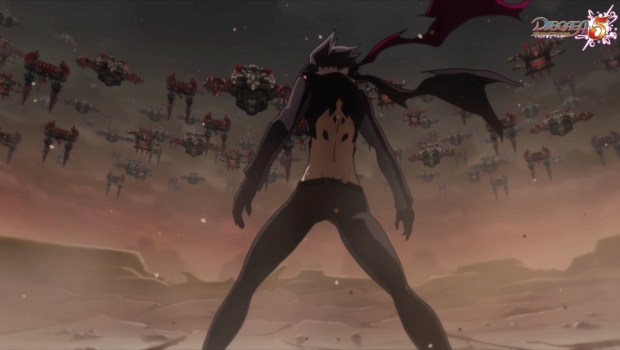 If something ain’t broke, don’t fix it. That was the thought that kept returning to me every time I booted up Disgaea 5: Alliance of Vengeance. Everything from the characters, to the attacks and weapons, to the skills and even the overall aesthetic, reminded me time and time again of my previous attempts to breach the series.

The only Disgaea I ever spent the requisite “hundreds of hours” with was the handheld version for the Nintendo DS. Every other game I would boot it up, play for a number of hours, and set it down feeling like I was rehashing those same memories over and over again. Disgaea 5, sadly enough, merited the same response from me.

I mean, a game where two penguins can tag-team dive-bomb an enemy can’t be all bad.

The set-up of Disgaea 5 is that an evil emperor named Void Dark has invaded, conquered a ton of land, and done something mean and horrible to the protagonist. The story has a few twists, but none are really interesting or memorable. Most of the charm comes from the caricature-esque antics of the main protagonists, the Overlords.

Seeing as Void Dark is super big and super bad, you’ll probably need more firepower than normal to take him down. As you progress through the campaign, several Overlords gradually join your Alliance of Vengeance, and each has a special ability they can activate to turn the tides of battle called Overload.

Each Overlord is unique in their own way, whether it’s the charming Seraphina of Gorgeous, the muscle-headed Red Magnus, or the calm and collected Christo. Their Overload abilities reflect these qualities, like Seraphina’s Balor Gaze that charms all male opponents in the area, or Red Magnus’ Super Olympia, which makes him gigantic and greatly boosts his physical prowess.

The main characters are certainly crazy – whether that ever becomes endearing is another story.

Besides Overload, the other major gameplay change in Disgaea 5 is the Revenge system. When characters die or take damage, it fills up the rest of your units’ Revenge gauges. When the gauge fills, your unit goes into Revenge mode, dealing extra damage and making your abilities easy to spam.

Beyond that, though, this is standard Disgaea. Turn-based strategy, with tons of units and the classic lift-throw movement mechanics. It’s serviceable, though frustration can arise due to the camera angles on the map. There’s a lot of static and moving scenery framing each battlefield, which is nice until you can’t see where your units are supposed to move or what angles you can approach from. There’s an over-the-head option for the camera that’s a little bit of help with this, but it reverts every turn back to the isometric view.

Disgaea standards like the Item World, recruiting, innocents and evilities all make a return. The democratic demon voting machine makes a token reappearance as well. You can even pick up quests to give you extra motivation to play through 4-1 for the fifteenth time, to get an extra item to take back to the Item World, to level up to get a new class, to level up by repeating World 2…

Large pieces of scenery can frustrate you a lot when you’re trying to plan out a strategy.

There is everything here a Disgaea fan will love, and for that, fans of the franchise will love this game. It’s the best Disgaea yet, looks gorgeous, plays well and has all the weird charm and ability to grind numbers into the millions that has become the hallmark of the series. You can spend literally hundreds of hours on this game, grinding levels and worlds and characters to get them levelled to the point where they’re unstoppable, and indeed many fans have already been doing so with the demo. For those of you out there, yes, Disgaea 5: Alliance of Vengeance is everything you wanted.

Seriously, discerning the two important numbers from the millions of fluff numbers is half the strategy.

For the rest of us, though, Disgaea 5 is going to be a hard sell. Many will advertise the hours you can pour into the game, but it also demands a number of hours from you – to learn the rules, play the maps, grind the levels, train your generic NPCs so you can finally progress in the story. It quickly becomes an exhausting grind, and one that rarely feels rewarding. In response to producing large numbers, the game permits you to increase those numbers again and again, and that’s your reward.

The story is barebones outside of the main plot. Skits are acted out in portraits that sometimes have voiceovers and sometimes don’t, and there’s not much to find in the way of extra scenes or interesting content outside of the plot. Quests are usually just “repeat this level but beat it in one turn,” and the reward is often just a new item that you then have to level up in the Item World by beating even more levels.

At this point, I’ve had my fill of Disgaea. There are some out there who crave this series, and I can sympathize. I remember constantly running levels on my DS during long road trips, watching those numbers slowly roll up into the thousands and millions, ecstatic that my main demons could run an entire Item World by themselves. Yet that grind doesn’t interest me anymore – I’ve played a lot of SRPGs and JRPGs that have offered more content that I care about this year. Storylines with memorable characters, interesting changes in mechanics, interesting scenarios and objectives; all are characteristics of my favorite strategy titles, and none are found in Disgaea 5.

If you enjoy grinding numbers, goofy anime antics, and over-the-top style, Disgaea 5: Alliance of Vengeance will give you hundreds of hours of replayability. If you don’t like the idea of spending hours and hours replaying levels and building up characters, then you might want to look somewhere else.