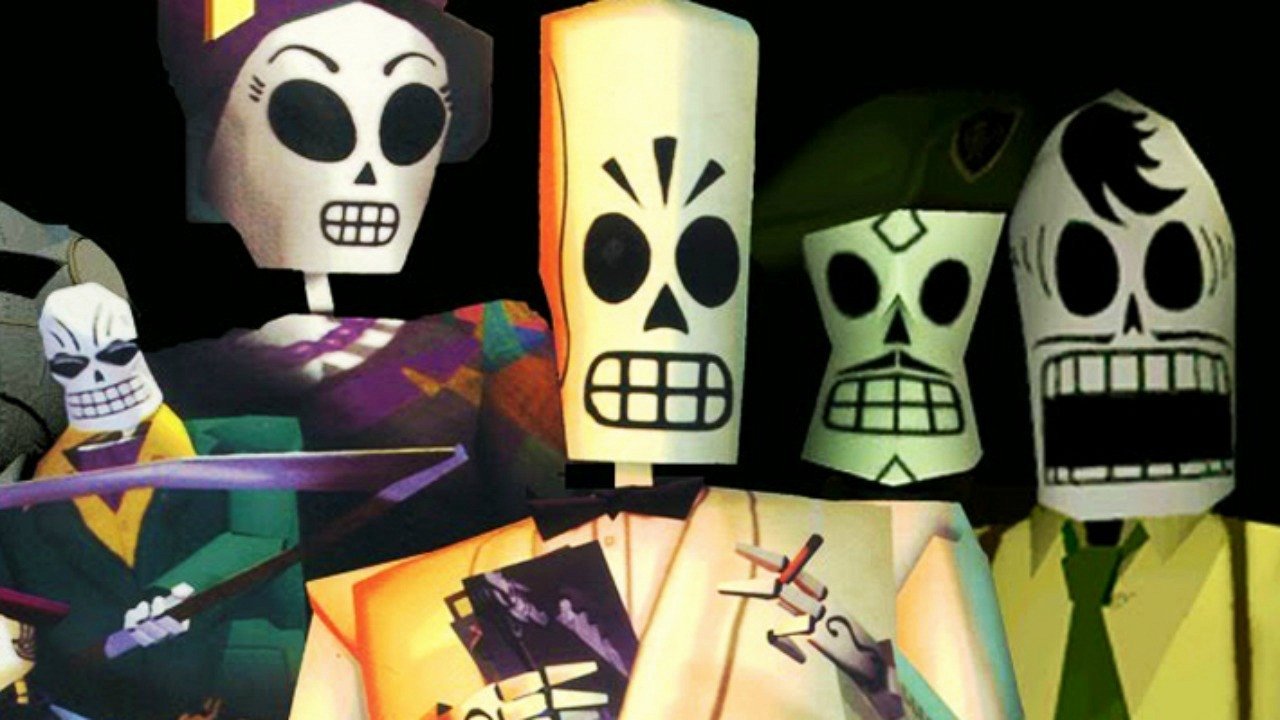 The recent spate of game remakes has, in my opinion, been an absolute boon.   It breathes new life into the classic games I grew up with, letting me share them with my loved ones.   Grim Fandango reaches back to 1998 in a time when LucasArts was cranking out the best point-and-click adventure games ever made, and Tim Schafer was at the helm.  Times changed and Tim went on to form his own band of misfits over at Double Fine.  Eventually LucasArts folded into Disney Co. and the hope of an updated version of this classic adventure became a reality.  And yes…Tim Schafer is once again at the helm.

If there is one thing that didn’t need to be retouched it was the fantastic writing in Grim Fandango.  Schafer and team gave us an incredible and very quotable game set in the Mexican underworld.  Grim Reaper and Travel Agent Manny Calavera works at the Department of Death and makes his bones by selling upgrades to the recently-deceased on their four-year journey to the Land of the Dead.  The only problem is that Manny’s clients are all deadbeats, barely able to afford a crummy walking stick.  Until he lands a client, Mercedes “Meche” Colomar, who clearly should be riding the luxury Number Nine train all the way to her final destination. Her file says otherwise, so Manny sets off to make things right.

Grim Fandango’s setting and characters are culled directly from the Spanish tradition of Día de Muertos, or Day of the Dead.  Like the figures presented in the traditional festival, the characters in the game are all Mexican skeletal calaca figures.  Even the government building of the Department of Death is embellished with Teotihuacan architecture and mural work.  The game is split into four distinct acts, and each has the same influence.  While it was state-of-the-art in 1998, it was in need of some love before it’d be ready for a new audience.

“This deck of cards is a little frayed around the edges, but then again so am I and I’ve got fewer suits…”

The team at Double Fine needed to pretty up Manny and friends, rubbing off the jagged edges of 17 years of age.  To that end, they built a new render engine and rebuilt all of the characters in the game, while still keeping the classic calaca look.  Beyond that they also gave us some new aspect ratio options. The original 4:3 aspect ratio leaves the side portions black, but you can now select a 4:3 option with beautiful side art.  16:9 is also an option, but since the team at Double Fine brushed up the backgrounds, but didn’t entirely bring them up to the same level as the principal actors, the scenes don’t expand cleanly.  Selecting this simply stretches the aspect ratio, making Manny and friends simply look a little wider than they should.  Not unlike rebuilds like the recent efforts on Halo, you can switch back and forth between render modes in the options.  Taking a moment to look at the original gave me an immediate appreciation for the graphical update.

Unfortunately there are a few graphical hitches that, hopefully, will be ironed out in the inevitable patches after launch.  Cutscenes get progressively more desynced from the audio, meaning they will eventually abruptly cut off, often mid-sentence.  The high-resolution characters do stick out a little bit against the backgrounds, leaving them looking a little sharper than their surroundings.  It’s not jarring, but it is clear that there was only minimal work done to the environments.

One area where the team focused heavily is on the real-time lighting engine.  As you can see below, it adds a great deal of film noir to the already stylized look of the game.

Click for the full image — the lighting adds quite a bit.

“My scythe… I like to keep it next to where my heart used to be.”

Even after all this time, my wife and I frequently say “I’ll just take a little more bread, to honor the dead” when we pick up a loaf at the grocery store.  When a game has that much impact nearly two decades later, it’s obviously something special.  But wouldn’t be great to get a behind-the-scenes look at what made all of that possible?

In one of the best added features to the game, the team at Double Fine have added a developer commentary track.  It’s a warmly-welcomed feature that will likely having you play through the game again just to hear all the love that went into this project, offering a peek behind the curtain.

As it was in the original, the game also has a full dialogue transcript, in case you missed a line of dialogue, or want to review a section for clues on how to progress the story.  There are also 98 pieces of amazing concept art that you unlock over Manny’s journey through the Land of the Dead, adding more color to an already-vibrant world.

Glottis is one of the most memorable characters of all time.

Grim Fandango is a point and click adventure game, but it’s also coming to the PlayStation 4.  Since they’d already done all of the work to make the game work with the Dualshock controller, they decided to port that functionality to the PC as well.  They used a fan-created mod for a portion of this — a fantastic way of involving true fans of the series.

One of the biggest features in Grim Fandango Remastered is the incredible soundtrack.  Peter McConnell (having done the soundtrack for every Double Fine adventure, as well as a massive list of games all the way back to the Monkey Island series) re-recorded the music for the game with the Melbourne Symphony Orchestra, and the results are spectacular.  It was worth buying the first time around, and it’s that much better today.

“I’m the Grim Reaper, lardass, and you’re my next customer.”

There are a few technical hitches in the current build of Grim Fandango Remastered.  I experienced crashes to desktop, and a few instances of being stuck on the environment.  Thankfully none of them are showstoppers, but as the game earnestly reminds you in the first few minutes – this game does not autosave.  For those who are used to their titles saving their progress for them, you might be in for a rude awakening if you don’t save frequently.

The game is also coming out on the PlayStation 4, Linux, Mac, and Vita.  While I’m not rocking a Linux or Mac box, I can say that the PlayStation 4 is identical to the PC version.  This lets a console audience experience what has been a PC-only affair until now.  Better yet, the Vita version lets you take it on the go.  The smaller screen of the Vita hides the few blemishes present, and there is no doubt that the platform is very suited to adventure games.

There is a reason why Grim Fandango shows up near the top of everyone’s best adventure games of all time list. Grim Fandango Remastered builds it up for a new audience, offering it’s genuinely-hilarious story for a whole new generation of gamers. While it isn’t the cleanest port ever, it’s a welcome addition to any library -- especially at the $14.99 price point. Welcome back, Manny -- we missed you.

Ron Burke is the Editor in Chief for Gaming Trend. Currently living in Fort Worth, Texas, Ron is an old-school gamer who enjoys CRPGs, action/adventure, platformers, music games, and has recently gotten into tabletop gaming. Ron is also a fourth degree black belt, with a Master's rank in Matsumura Seito Shōrin-ryū, Moo Duk Kwan Tang Soo Do, Universal Tang Soo Do Alliance, and International Tang Soo Do Federation. He also holds ranks in several other styles in his search to be a well-rounded fighter. Ron has been married to Gaming Trend Editor, Laura Burke, for 21 years. They have three dogs - Pazuzu (Irish Terrier), Atë, and Calliope (both Australian Kelpie/Pit Bull mixes).
Related Articles: Grim Fandango Remastered
Share
Tweet
Share
Submit