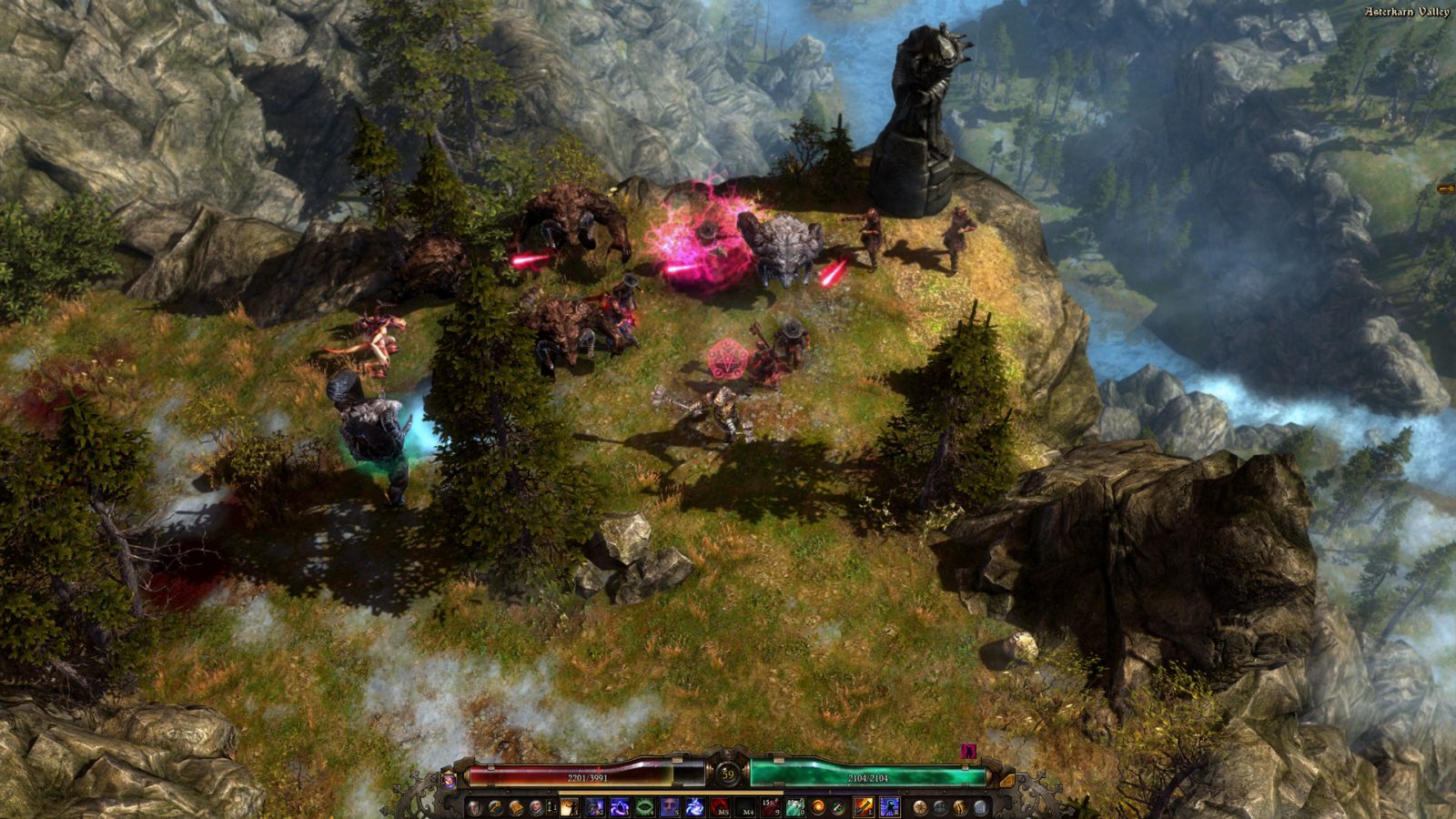 Grim Dawn has come a long way since its humble Kickstarter origins. First released in an alpha state in 2013, the game officially launched on PC in 2016 to rave reviews from both critics and players alike due to its blend of ARPG elements and enormous open world which provided players with hundreds of hours of finely tuned gameplay. So how does Grim Dawn hold up now, nearly five years after its official release and almost 8 years since it’s alpha days? In a word: fantastic.

I’m a huge fan of the ARPG genre, with Diablo III, Victor Vran, Nine Parchments, Baulder’s Gate: Dark Alliance, and more comprising more hours of playtime than I’d like to admit, yet I had never played Grim Dawn until the release of the definitive edition on the Xbox One — and now I am kicking myself for waiting so long to check it out.

Grim Dawn: Definitive Edition is impressive. Its world and inhabitants are incredibly fleshed out, featuring diverse terrains, tons of NPCs with distinct personalities to help, fight, or learn from, and a wide variety of enemies to take down. While the overarching story never fully grabbed my attention, it certainly set up a world in which I gladly spent well over 50 hours inhabiting with many more still to go. 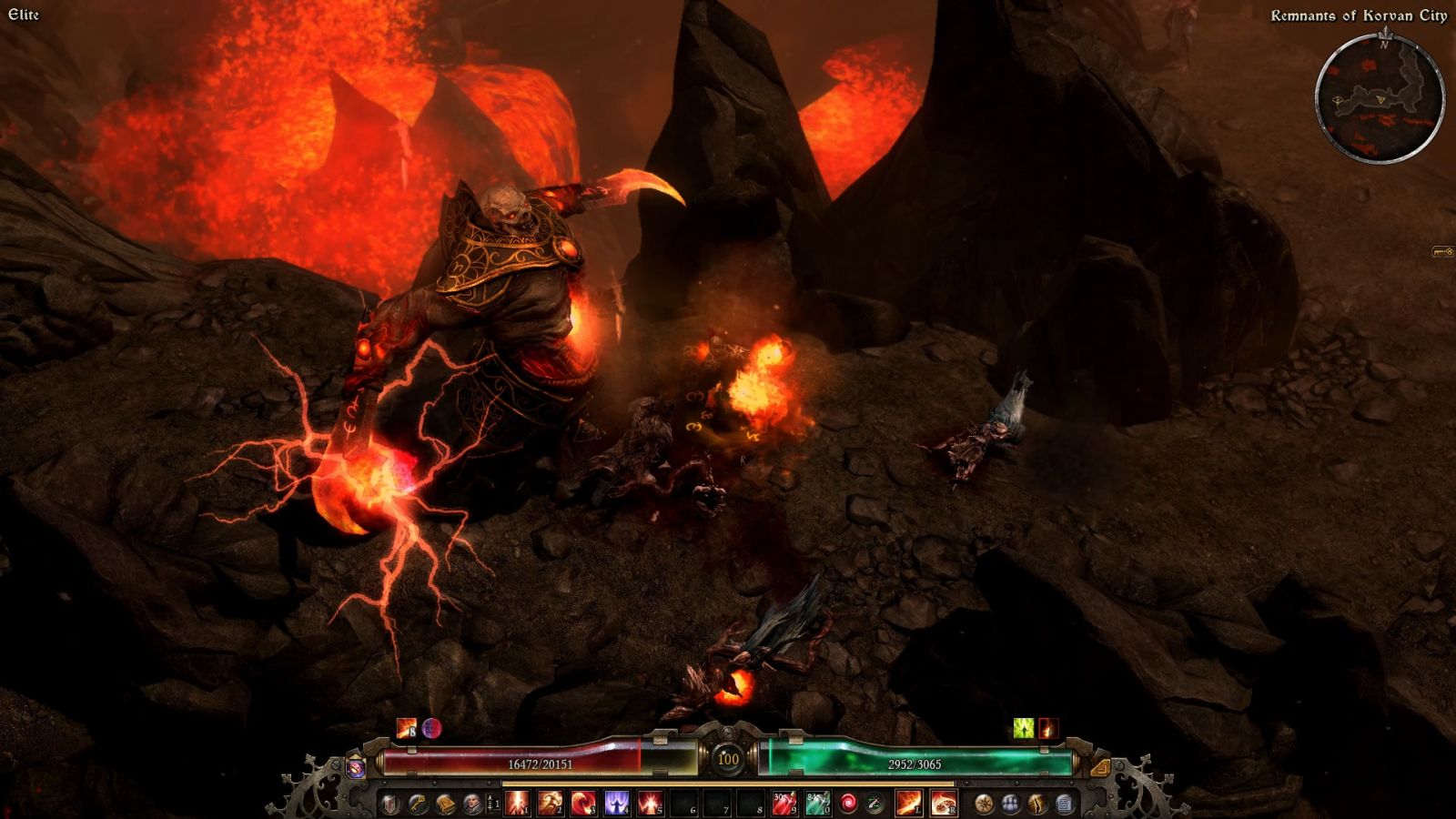 Years of updates and DLC have allowed Grim Dawn to expand into a game in which nearly every player will find a class/mastery that will suit their playstyle easily. Soldier, Nightblade, Occultist, Shaman, Inquisitor, Demolitionist, Arcanist, Oathkeeper, and Necromancer are all available as starting classes, which you can then further customize via mastery skill trees which unlock as you progress. Points gained from level ups can be used to either increase a skill or invest in the mastery tree to unlock new skills. Skills can then be quick-assigned to any controller button for instant access. I had a ton of fun unlocking new skills and figuring out which abilities best suited my playstyle when up against the endless horde of monstrosities I faced at every turn.

Like previously mentioned, the open world is huge – really, huge barely does it justice. There is so much to see, do, and find that I was constantly telling myself I’d stop my gaming session after one more cave only to find five other points of interest. Unlike Diablo III and its randomly generated map, the map in Grim Dawn is static and does not change between playthroughs, allowing the developers to fully flesh out the world they created. While I do enjoy randomly generated maps, the static world in Grim Dawn was the right choice. I enjoyed constantly checking my progress via the overmap to spot any areas I may have missed – whether due to not having the necessary items to progress or due to encountering enemies too strong for my current build – and then complete those areas once I was better prepared. 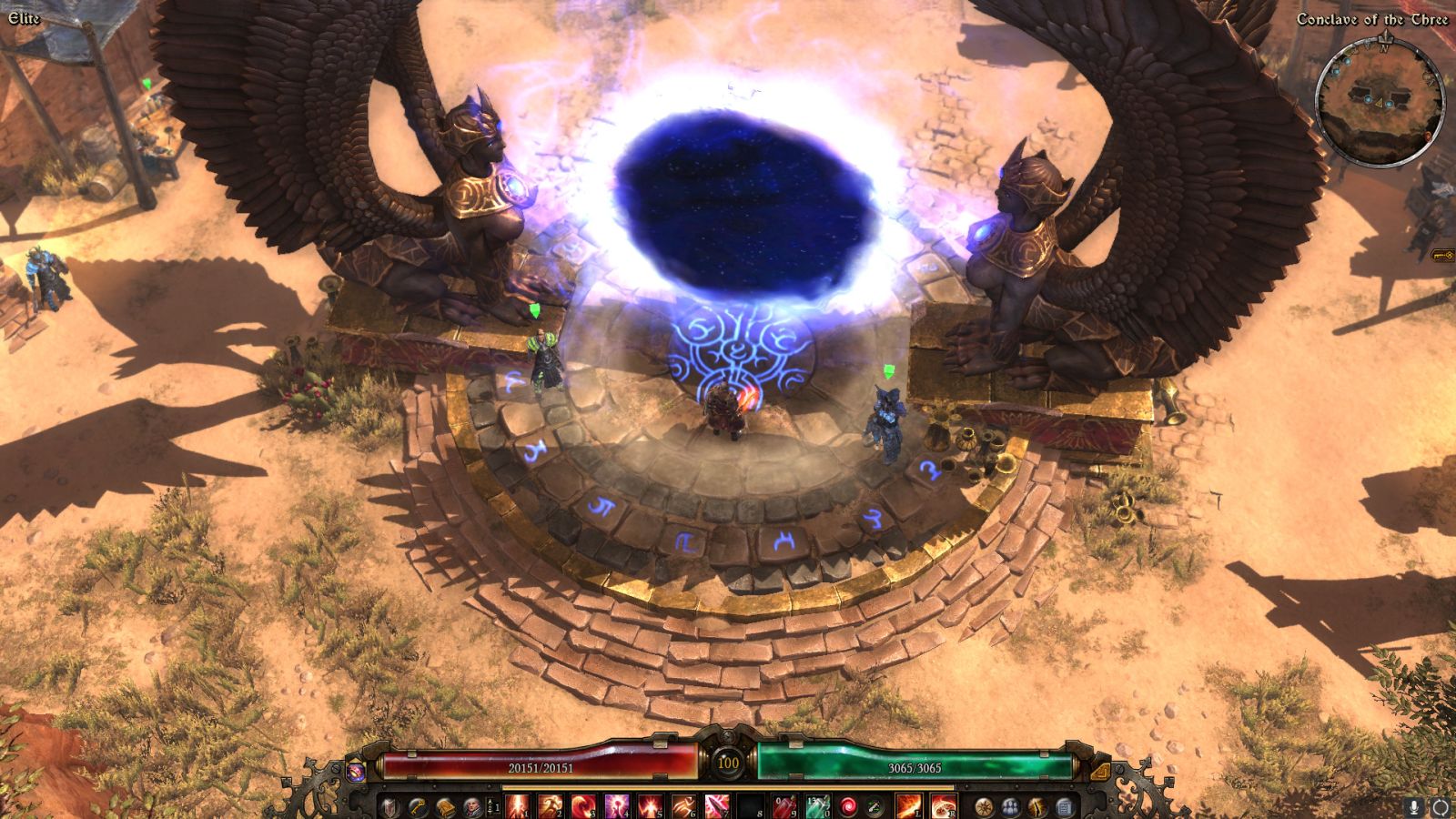 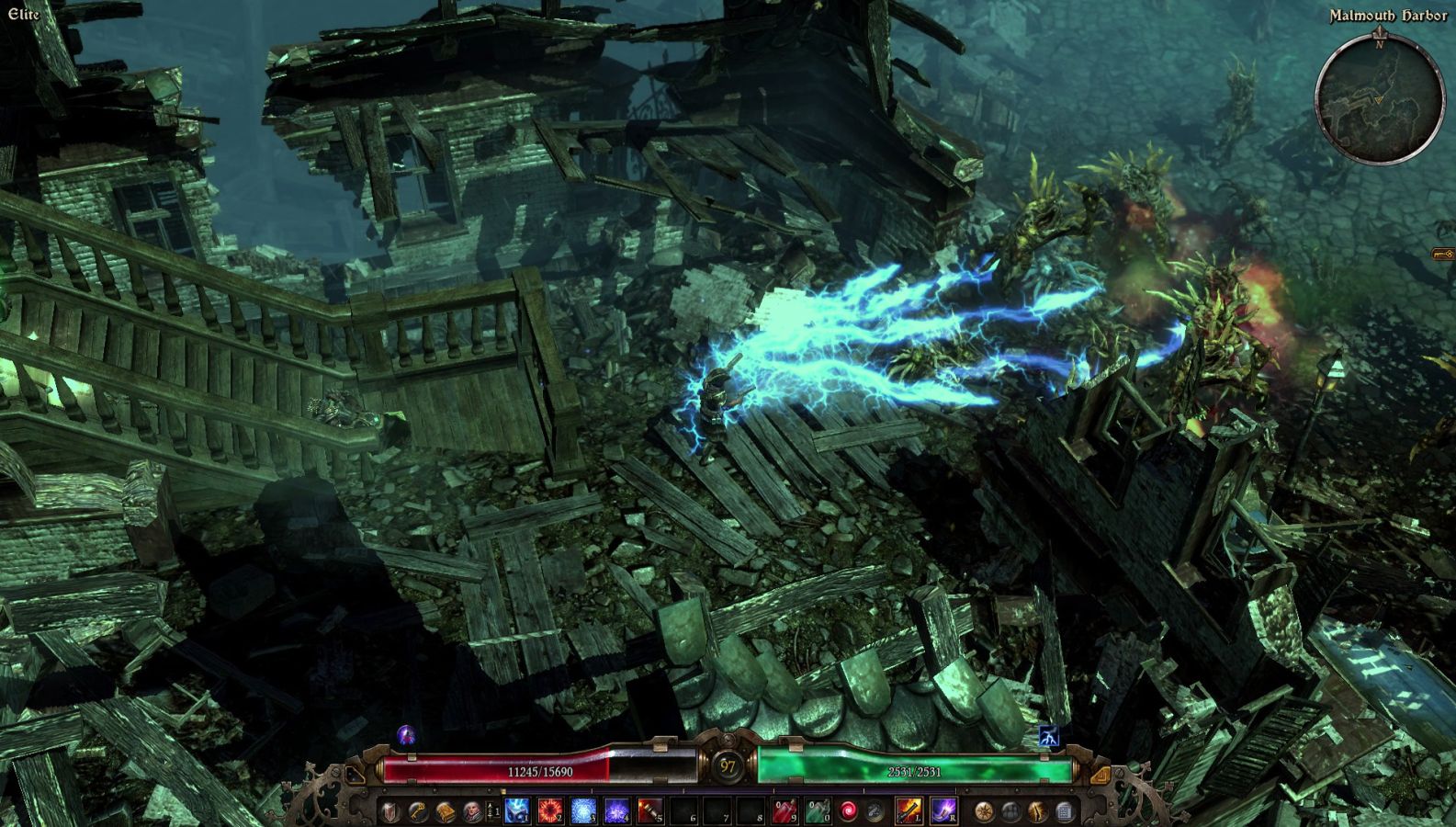 Travel is simple and handled via rifts which you unlock each time you reach a new area and activate. Additionally, you are given the ability to create your own rift to quickly leave an area to sell loot or just to prevent backtracking through a particularly large area once you’ve cleared it. While I spent most of my time on foot rather than fast traveling, as I wanted to make sure I left no stone unturned, these rifts remove the frustration that may have stemmed from the constant back and forth between merchants and areas while exploring. I would explore and loot until my inventory was full, open a rift to town and sell my unnecessary items, then hop right back into the fray and continue my journey. This system never cheapened the game experience since you did have to naturally find rifts in the wild before being able to travel to that location, so this only helped to alleviate backtracking in an already gigantic adventure.

Choices have consequences, and who you choose to align with will directly affect missions, areas you can explore, and items available to you, allowing for a great deal of replayability. While much of what you encounter is purely optional, there are a few times when the core story will force you to align with a particular side before progressing. Much of the time you’ll find yourself being given the option to help or hurt those you encounter, allowing you to be the friendly adventurer or all-around jerk. I greatly enjoyed the variety of choices presented, even if I struggle to choose anything aside from the “nice” choice. I did appreciate the times when the “nice” choice is not clear cut, forcing me to make a choice between two people – not knowing which is lying – or sometimes even making what feels like is the” nice” choice only to be double crossed by those I helped. The fact that much of this happened outside of the base gameplay missions made me appreciate exploring the world so much more as it felt alive and brimming with smaller stories.

The draw for most ARPGs is the loot and Grim Dawn: Definitive Edition is no slouch in that department. Every enemy, rock, tree stump, chest, pot, and boss drops a ridiculous amount of loot. Players can fill up their inventory in a matter of moments in some of the caves or just while exploring, leading to a constant stream of new weapons, armor, and attachments to experiment with. While I tend to stick with the same equipment for far too long, I did find myself experimenting quite often and using attachments to upgrade my items to better compliment my abilities. The addiction is real and Grim Dawn never lets you down, providing relatively useful equipment every step of the way and even offering a loot system where you can turn on and off the types of loot items you want to see if you absolutely are not interested in picking up specific items. 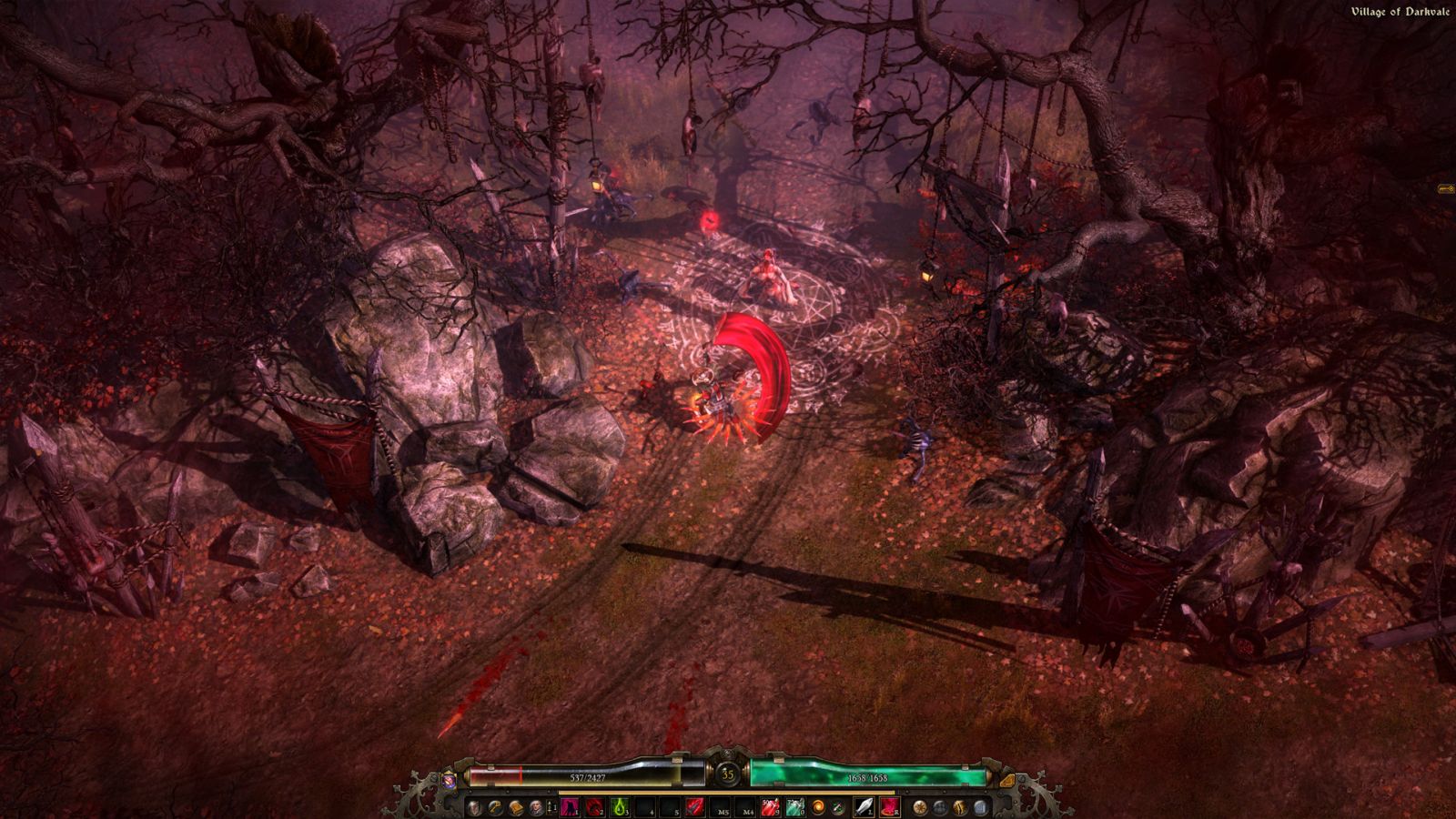 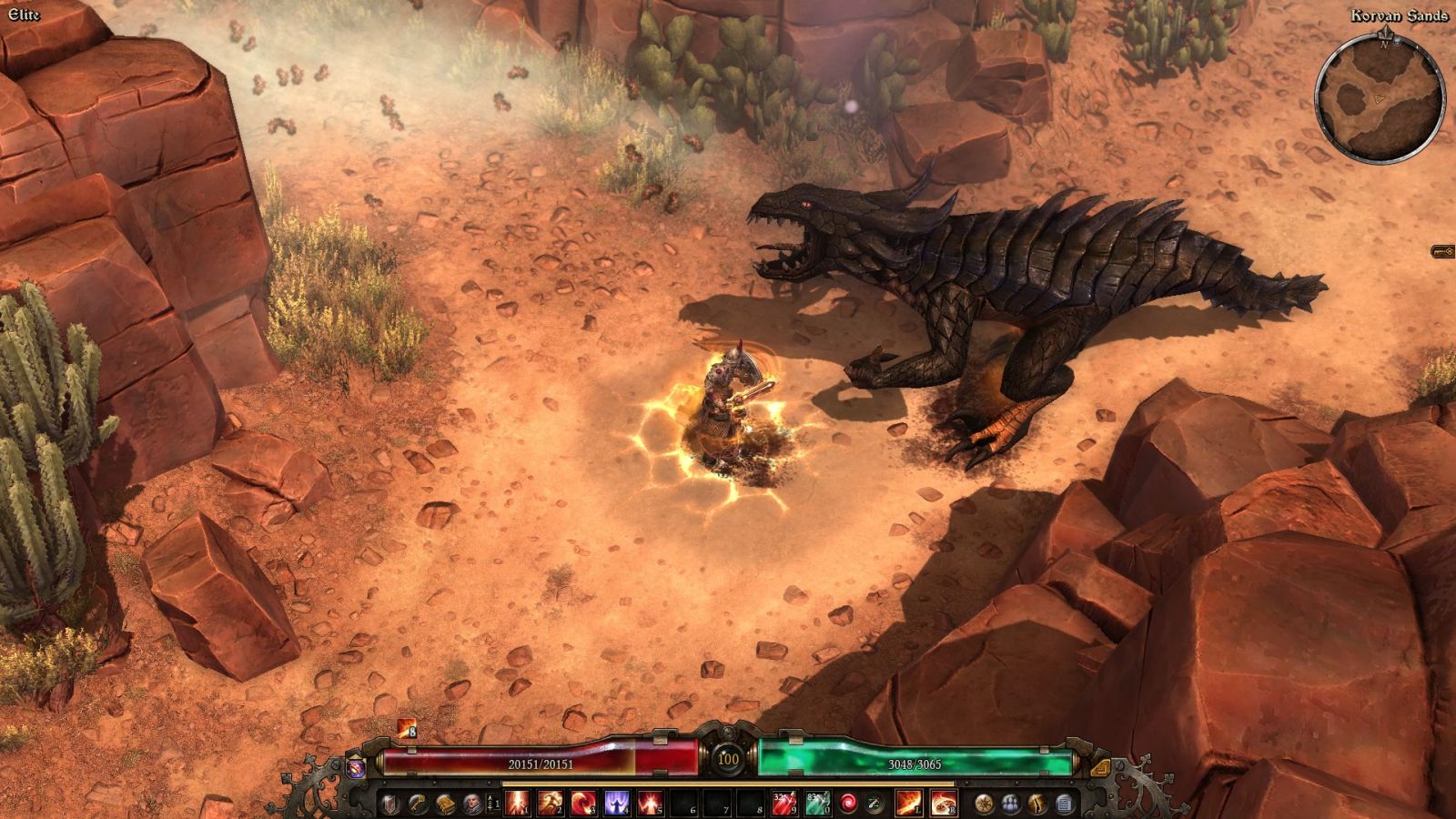 On top of the already massive base game, Grim Dawn: Definitive Edition contains both DLC expansions, Ashes of Malmouth and Forgotten Gods, each boasting brand new storylines, areas to explore, enemies, and unique items – not to mention countless hours of gameplay. Both DLCs are just as fun as the base game and never felt like an afterthought. Ashes of Malmouth raised the base level cap to 100, added new factions to join, two new classes (which are included from the beginning in the Definitive Edition), and even an Illusionist that allows you to transform your equipment to better suit the look you’re going for without losing any of the item’s base attributes. Forgotten Gods, while not quite as large as Ashes of Malmouth, still adds a new chapter, a new area called The Forgotten Realm which serves as a horde mode of sorts, a new class, and more. Overall, both DLCs are well worth the time investment, and continue to expand the world and lore of an already great game while providing exceptional play.

There are a few small issues, but nothing which negatively affected my playthrough. The game does show its age a bit in the graphics department, and there is quite a bit of slowdown when exploring, especially as you enter new areas for the first time. That said, I can only think of one moment where I experienced slowdown during an enemy encounter, and even then I didn’t experience any consequences.

One of my favorite aspects of ARPGs is co-op, and while Grim Dawn does support up to four players via online services, there is unfortunately no couch co-op, which was disappointing as these are some of the few games my wife enjoys. While the original PC release never featured couch co-op, I had hoped the Definitive Edition would, especially since it is now available on console. Still, Grim Dawn is a blast with friends or strangers online but works equally well as a single player adventure. No matter how you tackle the game, you’re sure to find countless hours of fun.

Grim Dawn: Definitive Edition is an overwhelmingly great package, stuffed with hundreds of hours of content, incredible replayability, a variety of distinct classes to choose from, a huge open world ripe for exploration, more loot than imaginable, and fun combat. Despite its age, Grim Dawn holds up incredibly well when stacked against more modern ARPGs and has made a fluid transition from PC to console with only a few minor slowdown issues.

Richard Allen is a freelance writer and contributing editor for various publications. When not writing for Gaming Trend you can find him covering theatre for Broadway World, movies and TV for Fandomize, or working on original stories. An avid retro gamer, he is overly obsessed with Dragon's Lair. Chat with him via @thricetheartist on Twitter and @richardallenwrites on Facebook and Instagram.
Related Articles: Grim Dawn: Definitive Edition
Share
Tweet
Share
Submit