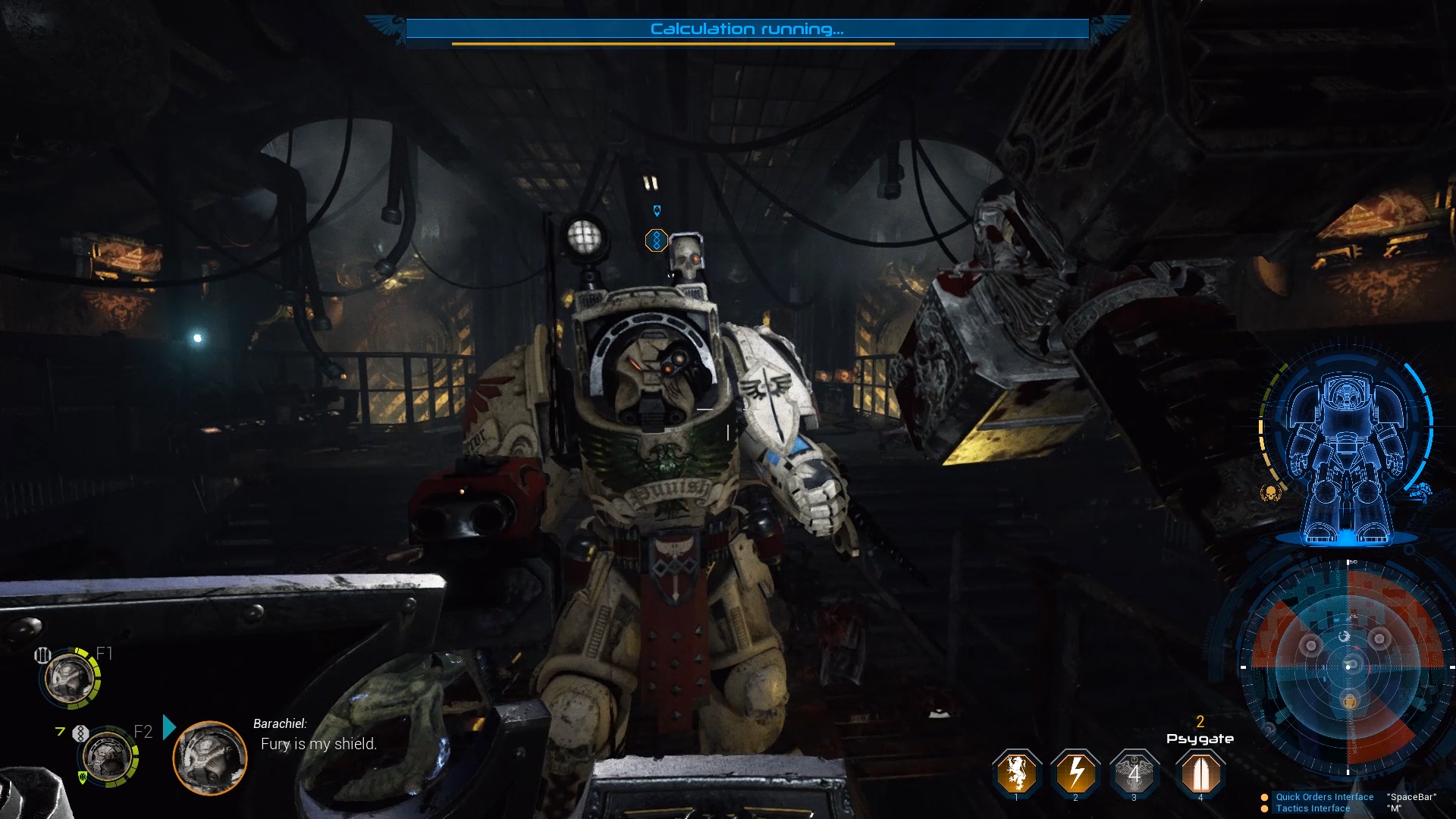 Games Workshop’s Warhammer 40,000 universe is massive in size and complexity. Its richness, diversity, thoroughly fleshed-out story, and overwhelming sense of mysterious intrigue have made it an obvious choice for video game adaptations. While many of these adaptations have been made (the Dawn of War franchise likely the most notable of the bunch), most have felt somewhat empty or unfinished, leaving fans disappointed and newcomers uninterested. With a few impressive exceptions, Space Hulk: Deathwing seems content to carry the Torch of Disappointment and hold aloft the Banner of Uninteresting.

This new shooter’s first mistake is its plot—it’s flat. Very flat. It goes something like this:

Leader: “It has an ancient Dark Angels ship within it, but it’s infested with ‘nids [Tyranids].”

Leader: “Get to our old ship, kill everything in your way, bring back cool, old stuff.”

Now, to be fair, there are a few more trials and tribulations that you and your squad must endure in order to reach said starship, but they’re nothing more than arbitrary roadblocks imposed upon the narrative to stretch the game’s length. Towards the end, the artifact that you uncover does actually have significance and major implications for the Dark Angels chapter, but this fact is sadly glossed over and unexplained. It also makes me wonder if this discovery will be considered canon from here on out, or if it will be forgotten.

Games Workshop may well have placed some creative restraints upon Streum On Studio to avoid producing any non-canon content, but we’ll never know for sure. Regardless, this lack of explanation and depth greatly cheapens the impact of Space Hulk: Deathwing’s narrative.

What is exactly is a Space Hulk? Who are the Dark Angels? Are the Deathwing part of the Dark Angels? Why are Space Marines who wield magical-psychic powers called Librarians? Who and what are Genestealers? What the hell are Progenoid Glands and geneseed, and why should I care about them? How about some background on the Imperium and this Emperor guy? Unfortunately, Streum On Studio’s latest title addresses almost none of these, and many more, glaring questions. Thankfully, as an avid fan of Warhammer 40,000, especially its fantastic lore, I’m pretty well up to speed on all of the terminology and references used within Space Hulk: Deathwing. However, asking someone without this same knowledge of Warhammer 40,000 to care about what’s happening in Space Hulk: Deathwing is like asking a 3-year old to care about the next Presidential election.

One area in which this game does succeed, breathtakingly so, in fact, is in its art style and graphics. Space Hulk: Deathwing is absolutely the most immersive Warhammer 40,000 experience ever created. There’s no better way to say it—the visuals are absolutely stunning. The attention to detail is staggering. It’s a lore nerd’s wet dream.

Many games have tried to depict the creepily dark, eerily morbid, and ominously grandiose scale of Warhammer 40,000’s architecture, some illustrating it better than others. As the metal of the ancient wrecks creaked and groaned around me—the audio is great, by the way—the thought of approaching ‘nids ever on my mind, I continuously found myself gawking at the magnificent sights around me, something not common in a “horde-rush” style game. Humanity, but especially the Space Marines, are a disturbingly zealous bunch, and everything from their weaponry and armor to their places of worship are replete with religious iconography. The technology they employ, like floating Servo Skulls for instance, is brutal in nature and although clearly futuristic, always has an ancient, almost primitive, appearance.

Streum On Studio has captured and portrayed the highly unique aesthetics of this strange universe flawlessly. The Deathwing, clad in their hulking, white Terminator armor, look every bit as menacing, massive, and powerful as they ought to. Their footfalls are a dull, heavy thud and their pace of movement feels just right—not fast, not slow, just deliberate. Whether melee or ranged, the iconic Space Marine weaponry is delightfully destructive and nicely matched to different types of engagements. Painting the walls with alien entrails has never felt so good.

Gameplay, on the other hand, is simple and straightforward—too much so, actually.

At first, it’s truly brilliant mowing through herds of Genestealers packed in small, dimly lit corridors or huge, expansive rooms with a multi-barreled assault cannon, smashing the few survivors to bits with your power fist or finishing them off with some psychic chain lightning. But after a few hours of wandering the cold interior of various wrecked starships, pulping untold numbers of mindless alien cannon fodder, and retracing your steps far too many times, the novelty wears off. The single-player experience then becomes quite robotic and repetitive and the desire to press on comes not from an investment in the story, but rather an interest in getting through the drudgery of it.

A tactical first person shooter this is not, at least in the single-player campaign. It’s all about maximizing your firepower and using fatal funnels to make the hordes more manageable. Chewing through wave after wave of Tyranids, again and again, in patterns that are woefully predictable (empty room=Tyranids incoming) does not make for an engaging playthrough. Your squad mates do help out and are quite good at dispatching your xenos foes, but there’s never any need to issue any orders other than healing.

Multiplayer, if you can connect and stay in a session without crashing, provides more of a challenge than solo play, but it doesn’t provide any new or unique mechanics. The whole affair feels like an afterthought.

In December, Space Hulk: Deathwing was delayed to allow time for the developers to iron out a host of issues that cropped up during the game’s beta (a delayed but polished game is always better than one that’s punctual but messy). Considering how many serious issues still persist, I think it should’ve been delayed even longer. Many, myself not among them, have encountered serious framerate issues. I experienced a handful of game crashes, as well as a smattering of annoying movement and shooting bugs, both in and out of combat, many of which resulted in an untimely death. Hopefully these persistent problems will be addressed with upcoming patches and prevented entirely when this title releases on Xbox One and PS4.

I don’t know what’s in store for the future of Space Hulk: Deathwing, but despite its many shortcomings, I think it’s loaded with potential. With a dry story and repetitive gameplay, it’s hard to not feel as though this title was nothing more than a glorified tech demo meant to show off how awesome Warhammer 40,000 looks (and it really, really does) rendered in the Unreal 4 Engine at the hands of Streum On Studio. Still, the game has established a very solid foundation upon which future successes can be built, provided they ship with more narrative and gameplay originality. Here’s to the future.

Space Hulk: Deathwing boasts the best, most stylistically accurate Warhammer 40,000 visuals yet created, bar none. It’s precisely how the grim darkness of the far future should look and feel. However, the incredible eye-candy of this new FPS is not enough to disguise its lackluster story, indistinct gameplay, and stability issues.