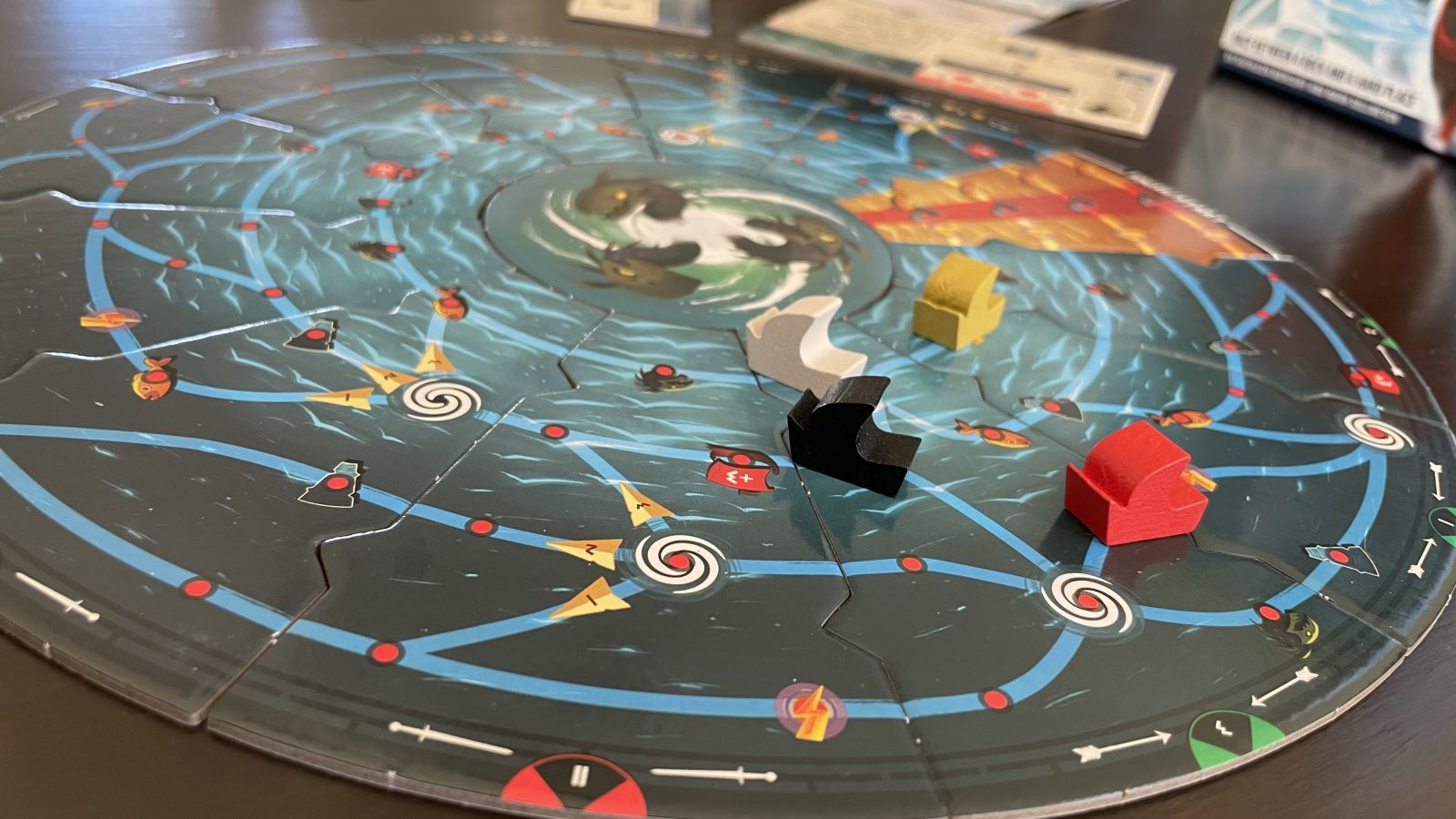 You maneuver your trireme through dangerous whirlpools, dodge deadly hydras, and pick up a few god powers as you attempt to beat your opponents in a daring, fast, and thrill-filled race to the finish line. That all sounds like a great time but Greece Lightning doesn’t quite deliver on everything it promises.

In Greece Lightning, you and up to four players will be competing to get your trireme (ancient Greek sailing ship) around two laps of the boards and across the finish line first while acquiring bonuses and dodging obstacles. Each round, players will simultaneously roll their navigation dice and then one or two movement dice. The navigation die is a d6 but is only numbered 1-3 while the two movement dice are standard d6s. The difference is that the navigation die lets you ignore hydras you may encounter within the result of the die roll when moving. The movement dice have a cool push-your-luck mechanic where you roll the first die then decide to push your luck with the second or not. If your second die is less than your first die then you bust and don’t get to move that round. It’s somewhat dampened though, since you likely only have about 4 turns before the game ends. A failed roll will almost assuredly put you out of the game so pushing is almost never worth it. 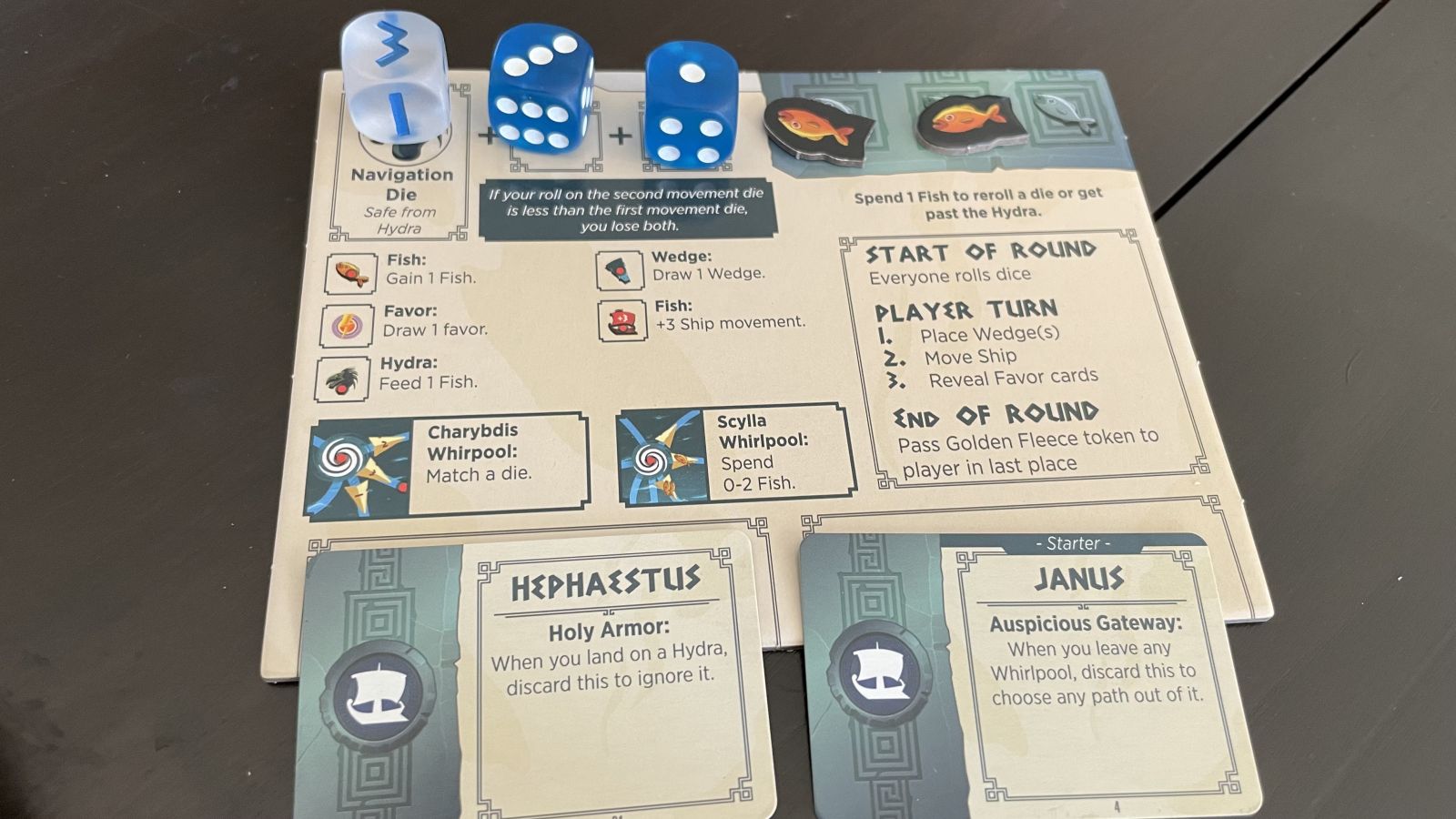 Once you have your dice rolled, you add them up to determine the total distance you can move that turn. So far you have a pretty standard roll and move game. Greece Lightning adds some twists and strategy by complicating the paths you take to move around the board. The board features twisting paths filled with both bonuses and obstacles. You can get fish which are needed if you encounter a hydra, otherwise you have to stop moving. You can get free extra movement. You can encounter whirlpools with exits determined by your dice rolls or the number of fish you are willing to sacrifice. You can acquire favors from the gods to break the rules of the game or hinder your opponents. Lastly, you can acquire new board pieces that you overlay on the existing board to change up the paths and obstacles. All of these things require you to put some thought into what the best path is for you to take. This is both what elevates the game beyond just rolling and moving but also drags it down. This game is meant to be quick. It has lightning in the name after all and plays best as a quick filler game. If you or someone at the table is agonizing over the optimal path to take on their turn, then the game crashes to halt and it begins to overstay its welcome. 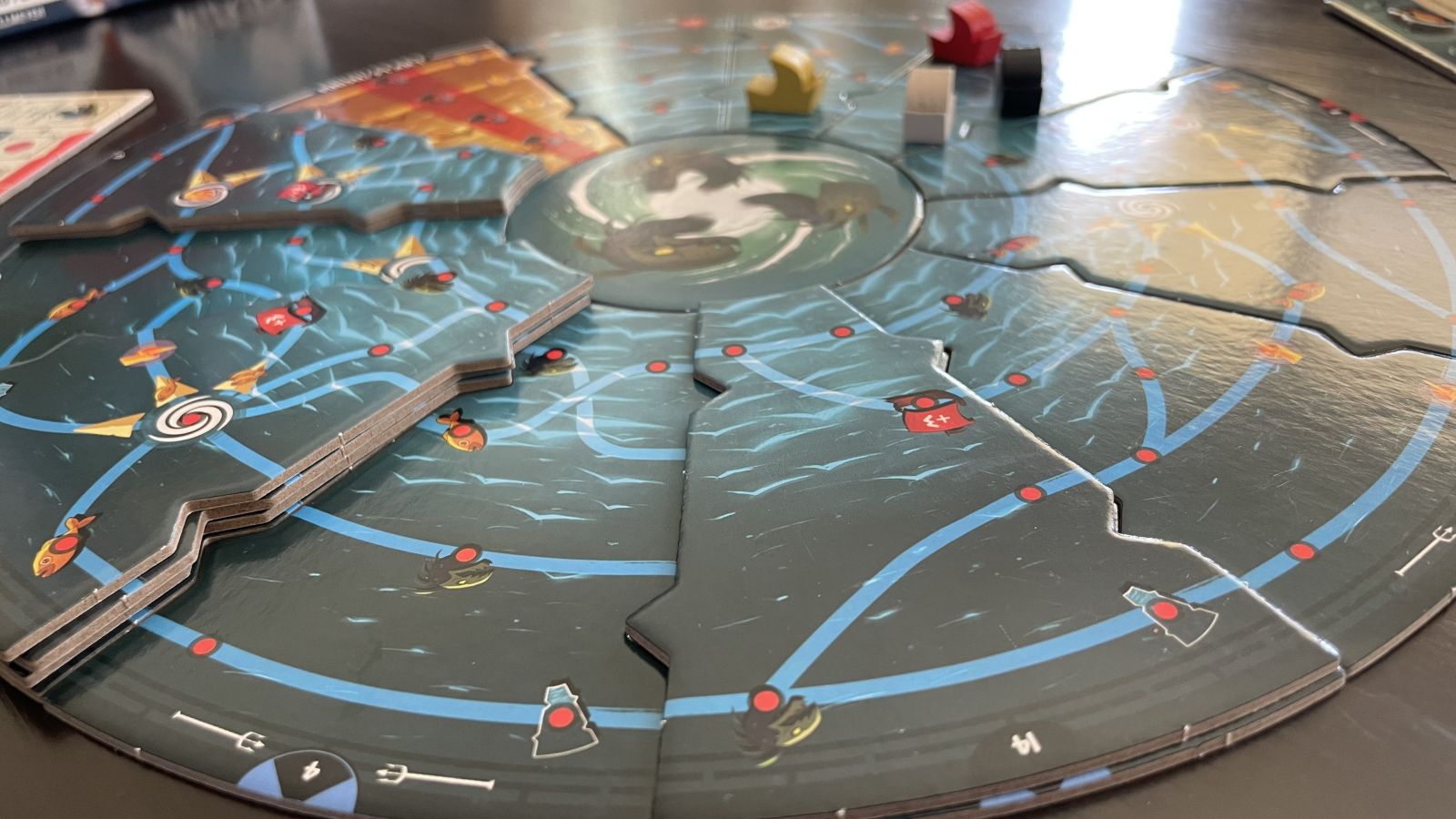 Greece Lightning isn’t a bad game but it’s not a great game. If you enjoy racing games it can be a nice filler before something more serious, but I wouldn’t go out of my way to seek it out. The components are nice, especially the dice, and the manual is presented clearly. The game is highly random which is fine for a short game but can be annoying if it drags on. Don’t take this one too seriously and you will have a good time.

Greece Lightning is a fast racing game with a unique theme that serves as a fun filler game option but is overshadowed in the racing genre by better games with more interesting mechanics.