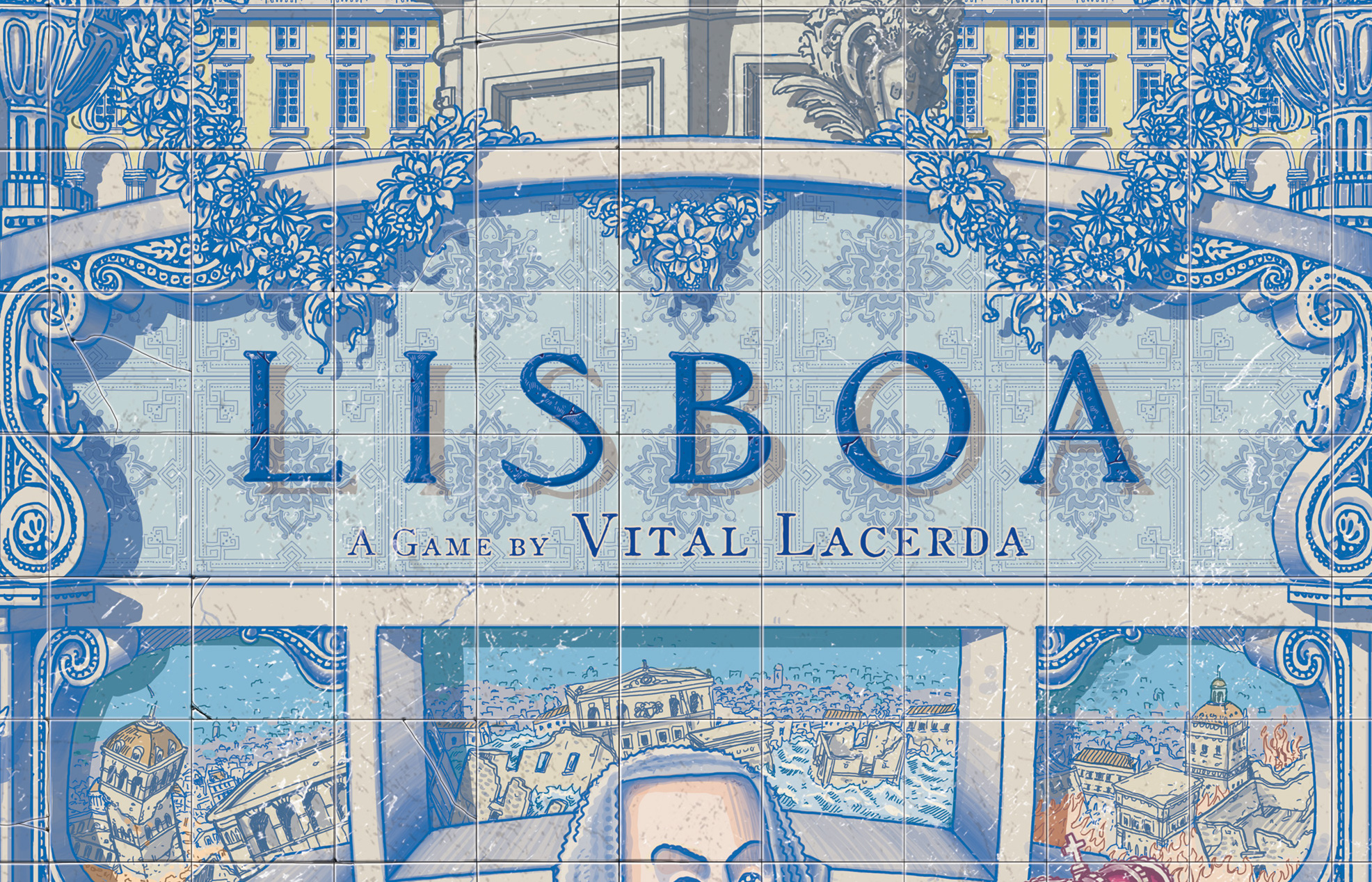 On the morning of November 1, 1755, a massive earthquake shook Lisbon to its core. The quake brought its own destruction, and the subsequent fires and tsunami left the great Portuguese capital in ruins. Immediately, the king and prime minister set to rebuild the city. They recommended the boldest of engineer Manuel da Maia’s plans to rebuild Lisboa with widened streets, large squares, and a rectangular layout. In less than a year, debris had been removed. This debris was used to help rebuild the city as architects created Pombaline structures, some of the first designed to withstand earthquakes. This is the backdrop to your part of the story as you play a noble, either solo or with up to three other players, working to rebuild Lisbon and its economic and cultural infrastructure.

For better or for worse, a criticism against Euro games is their lack of relationship between the mechanics and their theme. Not so with Lisboa, as the game’s theme of restruction fits perfectly with your job as a noble to influence the rebuild. As you unbox it, you’ll notice the game’s pastel colors, and even that represents Azulejo, tile art prominent in Lisbon at the time. The theme is immensely prevalent, and it gives you an immediate sense of immersion into the game. Designer Vital Lacerda’s attention to detail is impressive.

Your portfolio acts as the hub for all your activities throughout the game.

Your noble will be tasked with helping to clear debris to build shops to produce goods, construction public buildings to drive traffic to those stores, trade with the king, royal builder, and prime minister to earn state actions, visit those same nobles to gain different actions, or visit the cardinal to get bonuses. There are a few other things you noble can do during their turn as well, and all of it is done to earn you the most wigs. Wigs? Yes, in the 18th century wigs were desired by nobles across Europe and were seen as symbol of influence. It is a bit odd that your goal is to collect the most of what can only be described as a token of a disembodied head wearing a wig, but that’s the game’s victory condition.

You begin with five cards that reflect the years immediately after the earthquake. As you progress through the game, you’ll advance to more powerful decks farther down the reconstruction timeline. Each card presents you with multiple decisions. That decision will lead to a string of actions you’ll perform during your turn. There’s no “do this, then do that” flow in Lisboa. Instead, it’s “do this then do that, that, and that.”

The pastel-colored board is divided into two main sections: the royal court on the left and the city layout on the right.

Your deck is made up of noble and treasury cards, both of which have multiple uses. Noble cards can be played to your portfolio, which acts as the game’s ledger to keep track of all your dealings. Symbols along the bottom provide one time bonuses such as adding resources, building ships, or recruiting officials. The card slides under your portfolio till only the top of the card is left visible. The symbol there determines the amount of influence you’ll generate each turn, which is then spent on visits to the upper nobility.

Following that, you can choose to either sell goods or trade with the nobles. Selling goods requires a ship, which can belong to any player. The sold goods generate income for you and wigs to the player owning the ship. It’s a profitable venture to sell, but trading with the nobles really drives the action of the game.

Each of the three nobles has two available actions you can perform if you trade the goods in demand by that particular noble. The master builder allows you to recruit officials, which are used to run public buildings you can construct, or get a plan, which is needed to construct said public buildings. The prime minister will allow you to build a ship, upgrade an existing one, or produce goods from any stores you have constructed. The king allows you to meet the cardinal to gain a tile which provides you with a permanent bonus. The king also can grant you a royal favor, which allows you to piggyback off other people visits to or trades with the royal court.

Stores built in the city generate wigs, with bonuses coming from the public buildings that surround the square.

The proceeding three paragraphs represents just one option you can take on a turn. There are three other possibilities! Needless to say, going through each possibility could make this review as long as the 23 page rulebook, which, while in depth, will leave you jumping around to find a particular rule. As if sensing this, Lisboa provides a player aide book for assistance. Yes, book, not guide, which itself “simplifies” a single turn into seven pages.

Over 750 words in, and you may still be wondering exactly how this game works, and you’d be justified. I still haven’t even approached how to build stores, which needs to be done by actually visiting the royal court. The builder can do that for you. Building stores allows you to clear rubble, and rubble is important because you can collect it in sets to earn more wigs. The stores line part of the map that depicts the center of Lisbon, with colored streets arrayed, each worth a different value. You can score wigs from these, and those wigs can be enhanced if public buildings matching the color of the street have been built.

Even rubble collection is important, as complete sets will generate wigs.

The amount of things you can accomplish in Lisbon is staggering, and you’ll need to do most of them if you have any aspirations of winning. Yes, the game can be difficult to learn, but once you do, things will begin to click. Split into different areas, it’s easy to see how the many cogs of Lisboa work together in one magnificent system. Visiting the royal court essentially grants you permission to construct buildings or receive decrees. Think of trading as a way of getting the infrastructure you need to build. Noble and treasury actions, as well as shipping, grant you the basic resources and money to drive the action.

As much as you can appreciate the system Lacerda has woven together, Lisboa does have some setbacks. Setting up the game can be arduous; there’s an entire page in the rulebook just for the game’s proponents. It’s pastel colors and background images make the board a bit unsightly. The store tiles are all the same; it would have been nice to see some variance there. You’ll find it next to impossible to remember all the game’s symbols. Still, the biggest drawback is also the game’s strength; it’s depth. The suggested 60 to 120 minute play time is a pipe dream. My advice would be to watch a tutorial, play through a practice game, and learn the system. Your effort will be rewarded with one of the best themed games I have played.

Lisboa tackles the rebuilding of a great city from utter ruin through a system nearly as complicated as the actual reconstruction of the Portuguese capital. You’ll visit nobles, build structures, acquire and sell goods, and influence the elite all to score yourself a huge load of wigs. The game has theme in every corner and game aspects that feed off each other. It’s well worth the play, as long as you are committed to learning its deep system.