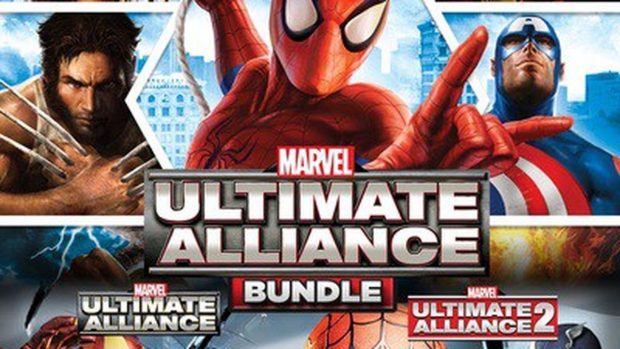 As an avid comic book reader and a huge fan of Marvel’s costumed crime fighters, Activision’s pair of Marvel: Ultimate Alliance games have been some of my most beloved superhero games of the last decade. Crafted with the same sense of wonder and imagination that I love about comics, both Ultimate Alliance games provided an approachable beat-‘em-up starring Marvel’s most iconic heroes. It is with great disappointment, though, that the series’ current generation re-release has been done with such half-hearted effort. Both games still manage to retain the simple action that made them appealing, but these are some of the most lackluster ports in recent memory. Marvel: Ultimate Alliance deserves better than this.

Thankfully, the gameplay mostly holds up. Both games task you with assembling your own four-hero squad from a roster of dozens and taking on waves of enemies with a top-down, action-heavy approach. The playability is incredibly simple, with each hero having standard attacks, grabs and superpowers, and the light RPG elements help provide a layer of customization to your team. They both ultimately play out like mindless button-mashers, but I say that as a good thing; they’re still satisfying, low-investment romps to play at the end of a long day or when playing couch co-op with friends.

The visuals, however, don’t hold up nearly as well. For starters, the cinematics look dark, muddied and all-around blurry, with little-to-no noticeable difference in the port to current hardware. On the other hand, the graphics during gameplay look slightly more crisp and colorful than I remember them, but still ultimately look a decade old.

The framerate, though, is all over the place. Calmer segments look fluid and smooth, but as the action heats up, the framerate takes a heavy hit. As more enemies begin to fill up the screen, the experience will almost always begin to feel choppy, holding back some of Ultimate Alliance’s best moments. It’s understandable that these games were once built to run on PlayStation 2 hardware and therefore feature their original visuals to match, but neither game seems to have been optimized for current hardware. The Marvel: Ultimate Alliance Bundle’s biggest setback is in how indistinguishable its games are from their decade-old counterparts. What was taxing on hardware on consoles in 2006 has no excuse for running poorly ten years later; this never feels like anything other than a lazy, drag-and-drop port.

Which leads me to address the Marvel: Ultimate Alliance Bundle’s largest hurdle: price. At launch, the asking price for the bundle sits at a whopping $60 – or $40 each when purchased separately. Compared to the recent Halo or Uncharted collections that have made their way to modern hardware with impressive graphical enhancements for the same asking price, the pair of Marvel: Ultimate Alliance games feel like highway robbery. Don’t get me wrong, from a gameplay perspective, Ultimate Alliance holds up as well as any of them. But with such a steep asking price for what amounts to a seemingly-untouched port job, it’s hard to justify a purchase to even the most die-hard of comic fans.

As someone who has been holding out hope for a third entry in the series for many years, the Ultimate Alliance Bundle comes as a huge disappointment. This is a fantastic and easily-accessible series that deserves renewed interest, but with such an uninspired port, Marvel: Ultimate Alliance is unlikely to get the attention that it deserves. Both games still succeed at providing an entertaining action RPG experience but the few upgrades don’t even come close to warranting the absurd price.

The solid gameplay has mostly held up after all these years, but the Marvel: Ultimate Alliance Bundle is a Hulk-sized pill to swallow with its steep asking price and minimal enhancements.

Gaming Trend's resident amiibo collector, Matt's a lifelong gamer with a soft spot for Nintendo. As a new father, Matt often struggles to stay as involved as he has been in years past but can always be counted on to come back for some engaging geeky conversations. A resident of Philadelphia, he is currently working on building up his Man Cave with all things Marvel, Star Wars, and Video Games. As an old-school gamer, Matt firmly stands by his belief that gameplay will always be more appealing than story.
Related Articles: Marvel Ultimate Alliance
Share
Tweet
Share
Submit