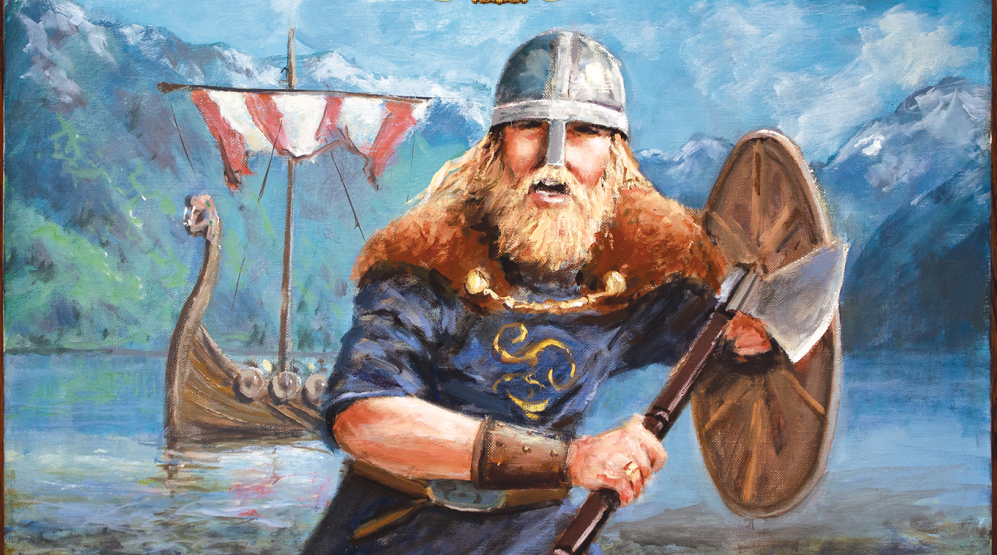 In the 8th century, Vikings from Scandinavia first raided the coast of the British Isles. Over the next century, raids morphed into invasions, and the native Anglo-Saxons found themselves in a struggle to save their homeland. By 878, the Vikings had pushed the Saxons to the brink. It was then that the Anglo-Saxon savior, Alfred the Great, led a massive victory over the Vikings at Edington and established, at least briefly, a tentative peace between the Saxons and their invaders. Enter Academy Games’ latest, 878: Vikings – Invasions of England, which recreates the Viking’s onslaught and Alfred’s attempt to stop the horde’s advance.

878 was born from a successful $560,000 Kickstarter campaign, and the resulting production value reflects that. The mounted map is vibrant with spacious areas, known as shires in the game, to hold your growing forces. Each of the four factions in the game have their own sculpted figures, and the cards are beautifully illustrated. The base game has more than enough chrome, but you can add to that with an expansion, unpainted leader miniatures (the ones in the pictures are painted post production), buildings, and a gigantic fabric-topped, rubber map. You need none of this to enjoy the game, and all the extras can run you $120, but those miniatures sure are nice.

878 has amazing production values, from individual faction sculpts to a brilliantly colorful map of England.

If you are familiar with Academy’s Birth of America series, you’ll notice several similarities. 878 pits a group of factions against another group. On one side are the Anglo-Saxon Housecarls and Thegns against the invading Norsemen and Berserkers. Each faction has its own set of dice that let you know how effective it will be in battle. Dice can have three effects: hit (crossed axes or swords), flee (troop running), or command decision (blowing horn). Hits kill opposing troops; fled troops are removed from the board and allowed to return at their faction’s next reinforcement phase; and command decisions allow you decide whether you want that troop to stay and fight another round or retreat to adjoining territory. Factions also have their own deck of cards that are used for army movement or trigger special events.

You start with a smattering of English troops across the map. Normally, cubes are drawn from a bag to determine play order each turn, but the Norsemen player always starts the game. The first Viking player to activate each turn will draw from a Viking invasion deck. Usually, and always on the first turn, they’ll have an invasion card with an army leader and a sizeable number of troops. This army may land anywhere along the North Sea coastline. You play movement cards to determine how many armies can move and how far they can travel.

Viking army cards hold their units while a corresponding leader is used to show their location.

Viking movement is slightly different because leaders do not have to end their movement after engaging in a battle like leaderless armies must do. For example, a leader’s army with three movement points can land in a space to battle, move another space, and battle again. This means the early game will see the Vikings chew up massive amounts of land. The English player needs to remain patient as shire after shire falls to the horde from the North.

While Vikings muster armies that can land along the coast, they have few cards that provide reinforcements to bolster these armies. On the other hand, English factions gain reinforcements when they activate each turn. Cities can allow one or both factions to add troops to the board. Over the course of the game, this trickling turns a meager English defense into a mighty force. At turn five, the English get their one and only leader, the great Alfred himself, who can gather these forces to strike back.

The game’s momentum swings like a great pendulum. The English want to outlast each Viking punch long enough to gain strength. The Vikings are racing to gobble up cities as fast as they can. Not only could each captured city prevent English reinforcements, they also serve as the game’s victory condition. If the Vikings can retain nine cities by the end of turn seven, or whenever certain treaty cards have been played, they win. The Vikings will invariably hit nine cities at some point, but whether they can hold them is another matter.

Your success will come down to how to maneuver and prepare yourself for the inevitable battles. Once engaged, you’ll find English Thegns are prone to fleeing. Housecarls and Norsemen may flee too, but the steadfast Berserkers will stand and fight. A special deck of English Fyrd cards can be drawn for each battle where the English are defending a city. These medieval militia are not very effective fighters, but they do serve two great purposes. They are fodder to allow your better troops to stay alive longer, and they can slow the Viking war machine down. Any battle that lasts more than one round forces the Vikings to lose another movement point. Using two of their movement points to capture one city might prevent them from moving to capture a second victory location. It’s a great balancing mechanism for the English.

It takes time, but eventually the English will muster enough of a force to counter the Viking onslaught.

Each deck is loaded with event cards that can alter the map. Events can cause one faction to switch sides, echoing the fickle nature of medieval loyalties. Forts can spring up to add defensive bonuses in battle. You can obtain extra movement. Managing your deck to play these events at the right time can swing things in your favor. The only annoyance I had was when drawing cards to get your hand back up to three. You must always have a movement card, and there are so many events included I found that I often had to discard all my cards, reshuffle, and draw three more only to find I still didn’t have a movement card and had to do it all again. I eventually added a house rule to fix this when it happened three or four times in a row.

The pull system for turn order can also greatly alter your plans. The pull is done one cube at a time each round, so the round order unfolds as you play. You may find your opponent has been drawn to play back-to-back turns to end one round only to be drawn again to take the first two turns of the next round. I love the replayability of this series. Each turn, let alone each game, is never the same.

Speaking of replayability, varied strategies abound for you to try out. In my first two games, I saw both sides win. The Vikings were able to encircle and defeat a massive Saxon army to gain control of a majority of England in the first game, while the second saw the English depleted Viking armies piecemeal with pockets of small armies layered across the countryside. Like much of Academy’s offerings, the game is simply enough that it doesn’t feel like a true war game, while still providing enough strategy and flexibility to make it an engrossing affair.

I felt that the Birth of America series added nuances along the way that made each game better than its predecessor. Considering how well this foray into European history is, I am excited at the direction these titles could go. 878 is a fantastic game that you’ll need to play both sides to truly enjoy. Where to attack for the Vikings and how to defend for the English are decisions that matter from the onset. If you are a fan of these games, it’s worth adding to your collection, but even if you are new to lighter war games, this one has a lot to offer in less than two hours of game play.

Academy Games took everything they learned from its Birth of America series and brought it over to 878 Vikings. The simple and elegant design meshes well with the strategic game play. The puzzles presented by the marauding Vikings and the desperate English will make for an entertaining game night.