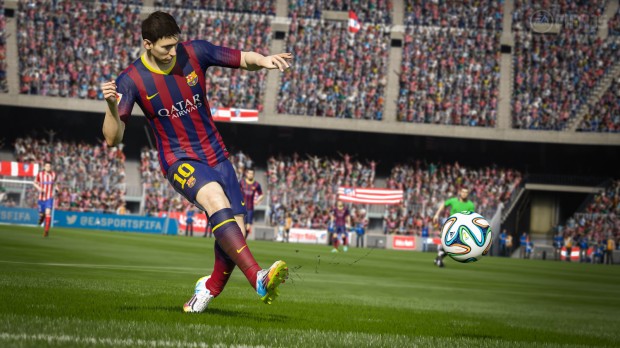 The FIFA series is far and away the most popular sports series in the world. While that is obviously a positive, it means eyes shift directly toward the series come late September. Everyone begins asking the question “Will it change enough?” This year, the folks over at EA Sports have been promoting increased goalkeeper intelligence as well as a more nuanced presentation. Leading up to FIFA 15’s release, it seemed like these upgrades may not be as grandiose as some expect. The title has now launched, but are the new additions enough to pique long-time fans interest?

Once you boot up a game in FIFA 15, one of the immediate changes you will notice is in the presentation. There is a much more lifelike feel to almost every aspect of the game, from the setup beforehand to the actual animations while playing. Commentary by Martin Tyler and Alan Smith is fluid and never feels forced or awkward like many other sports games. The real key to the impressive presentation in FIFA 15 are the subtle details EA Sports has inserted into every aspect of the game. For example, you now see players pulling the opposing team’s jerseys, there is a real ball boy that will toss the ball to you when a player must throw in, and tons of other small bullet points that really make you appreciate the attention to detail EA Sport’s has achieved.

You notice this detail even more so when you pause the game. In one intelligent new addition, the pause screen is no longer a bland wall of menu options, if you leave it idle, the screen begins to play highlights from the match. The catch is that the highlights are no longer boring pulled out camera shots, they are up close and personal with the action, showing off the fidelity of player movement and amazing facial reactions to everything happening on the pitch. If you look closely enough, you even see player’s eyes darting back and forth.

No position on the pitch has to move his eyes back and forth more than the goalie. FIFA 15 has placed a large emphasis on the goalie and increasing the lifelike ability of this all-important position. One of the most noticeable parts of the brand new goalkeeper technology is the ability for the keeper to read and react to the situations happening ahead of him. The goalkeeper tends to watch the ball more and react when you make a quick movement. This can become very helpful to the striker as he can expertly fake the goalkeeper out by going to the left and quickly taking a shot at the right side of the goal. This helps add an extra layer of strategy that was not known to the FIFA series in years past.

In many cases, when you try to make animations more lifelike, that can result in some awkward situations where physics take over and ruin the experience. Fortunately, that is a rarity for the goalkeepers in FIFA 15. I only experienced a few instances where my goalkeeper did not react the way he should have. Those instances resulted in a few goals for my opponents which can be very frustrating. You will also notice that goalkeepers tend to parry the ball more often whereas they used to simply catch the ball. This new focus on the goalkeeper is smart, and helps improve by far the most important position on the team.

Another bullet point that seems small but helps create an excellent atmosphere is the new addition of realistic crowd noise. In years past, the crowd would just continue to make a slightly audible cheer until someone scored – or came close to scoring – a goal. This year, just like in a real game of soccer, the crowd participates throughout the contest. Fans at Anfield in Liverpool will act differently than any group, and that persists throughout multiple clubs. During the game, the crowd will even break out into club songs, especially if you are destroying (or being destroyed, in my case) the other team by a few goals, the crowd has to do something to entertain themselves. Fingers crossed EA Sports implements a stadium-wide wave next year.

As expected, FIFA 15 has the same atrocious menu design found in NHL and Madden NFL 15. The Microsoft metro aesthetic continues to rule every menu you enter, and while it is much faster here than in other EA titles, it still needs an overhaul. One part of the menus that did get a redesign, however, is the team management aspects. It is now much easier to perform substitutions, with the game recommending who you should substitute in for your tired players. You can also designate roles such as penalty kick taker, who’s the Captain, etc.

FIFA was one of the first games to integrate an Ultimate Team mode in which you collect multiple trading cards of various players and play with them in-game against other folks across the world. This year they have made one very nice change to the ever popular feature which is the ability to get players on loan. When you first start your Ultimate Team, you are allowed to sign one loan player, who ends up being much better than your entire team, for a few games. Getting loan players from then on is a bit more difficult but is definitely a nice way to spice up the process of grabbing top players. It allows you get a star early on instead of having to slog through the early stages of Ultimate Team with a majority of unknown athletes.

As for the online play, very little to nothing has changed from years past. You still play in a league and play one on one (or two on two) with one another. Getting into a match is a fairly easy process with the only issues appearing in game. Latency issues seemed to be rare but the one time they did pop up resulted in the game dropping entirely. You then wait at a screen which calculates which team would have won by using statistics of the match. This is a good idea but ends up being nothing but frustrating as you see yourself lose a match you think would have went your way. Thankfully, you do not have to rely on the computer tallying the winner and loser very often.

FIFA 15 is a very good game. The only real issue is that it all seems very safe, when risks are needed to keep annual franchises alive. The Career modes both remain the same, with no major or even minor noticeable differences appearing. The improved presentation and enhanced goalkeeping is something EA Sports needed to add, but it seems like FIFA 15 is missing one big feature for which it could hand its hat on. Nonetheless, if you love FIFA, FIFA 15 will continue to excite you and keep a smile on your face. If you are waiting for some big change, keep on waiting.