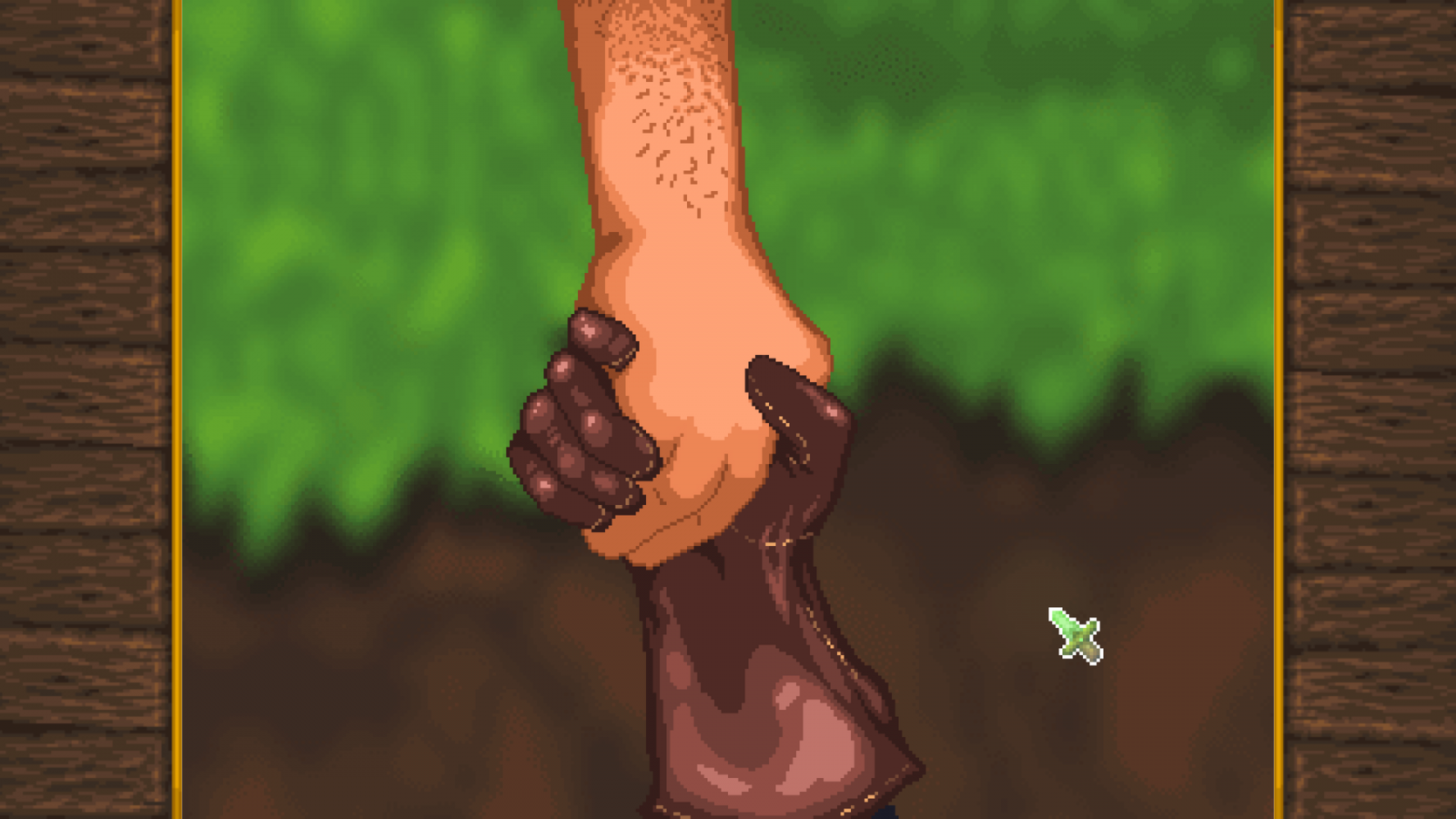 It’s the year 2074, and mankind is enslaved by a demonic overlord. New Haven Guardian, Starborn, attempts to assassinate the demon, and fails. 1000 years earlier, Tondbert, a guard in the kingdom of Wrinklewood, lets a clearly suspicious, hooded figure into the kingdom during a drunken haze. The princess is then kidnaped, and Tondbert sets out to rescue her. While these two events may seem disparate, they’re actually very closely connected and, in order to prevent the dystopian future, you’ll need Tondbert and Starborn to cooperate across space and time.

Guard Duty is a short, but ambitious adventure game. It’s about 5 hours long, but features full voice acting and incredibly detailed pixel art. The game starts with a short scene in the future, then cuts to 1000 years earlier to Tondbert’s quest to save the princess, where you’ll be spending most of your time. You’ll have to solve the typical inventory object, moon-logic puzzles so emblematic of the adventure game genre, so I would recommend having a walkthrough close by. Most puzzles do have a sort of logic to them, while a few have nonsensical solutions. Puzzles do get a bit more sensible in the future, but unfortunately you don’t spend much time there. While Guard Duty is an ambitious game, it doesn’t quite meet the bar it sets for itself. When starting the game, you may think that you’ll be switching between the two protagonists throughout the story. In actuality, you’ll play two acts as Tondbert, then one as Starborn. It’s not an unfinished game by any means, but it feels like the developers couldn’t entirely accomplish what they set out to do. 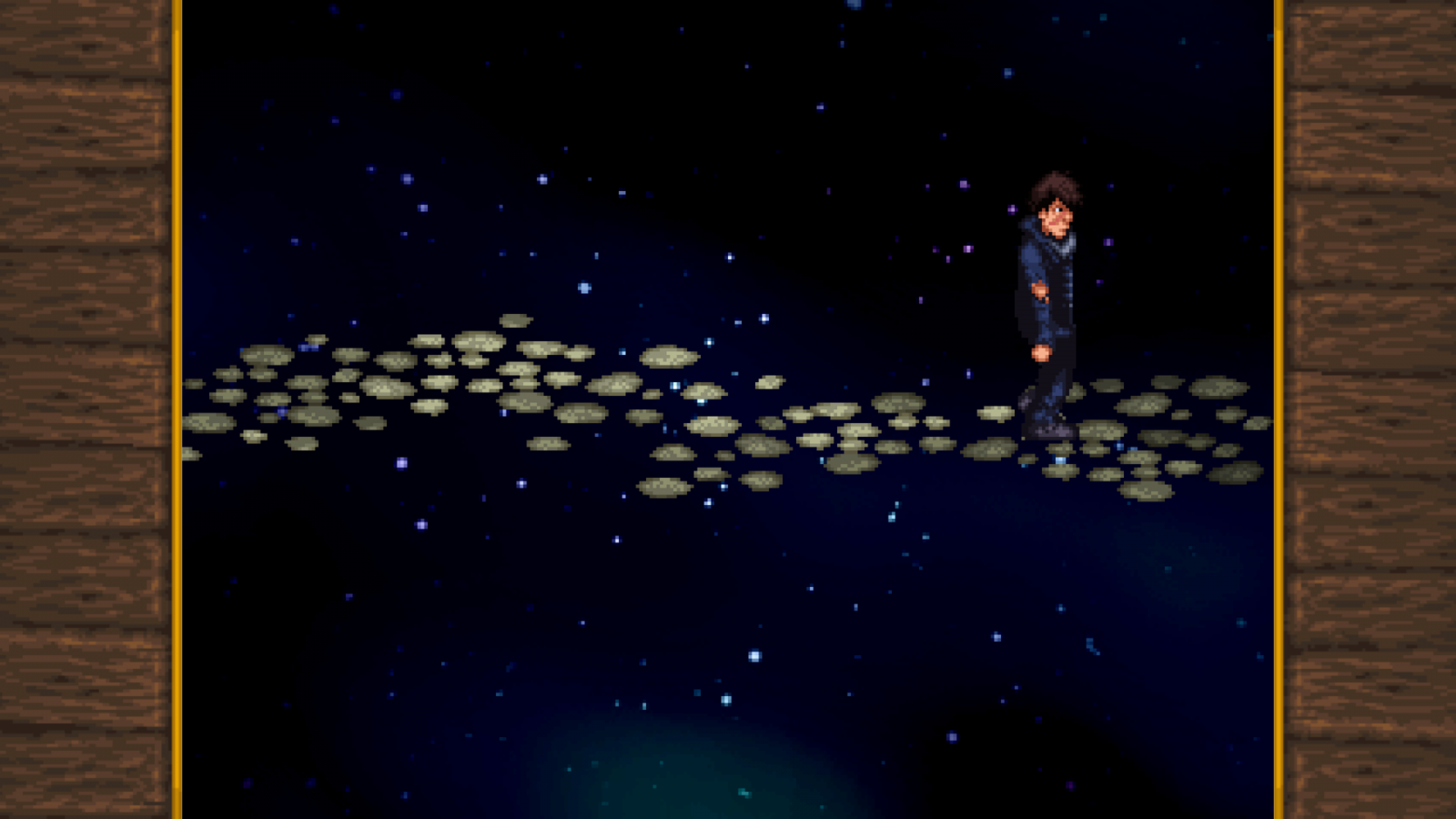 Visually, the game is well-detailed and animated. Backgrounds are lush with greenery in the past and cold and metallic in the future. It’s a beautiful game, but all that detail comes at a cost, it can be very difficult to tell which screens will scroll and lead to new areas. Several times throughout the adventure I had to consult a walkthrough only to learn that I needed to walk a bit further right or down. The game already tells you what parts of the screen lead to other areas with a small arrow when you walk nearby, but you have to be so close these can be easily missed.

The voice acting is fairly decent throughout, the sound quality can vary from voice to voice and, while it’s certainly noticeable, it’s never a problem to hear what someone is saying. There are a few scenes, however, where a single sound effect plays over and over in the background which quickly becomes grating. These scenes can last quite a while either because you have to solve a complex puzzle or there’s a lot of dialogue to listen to, and the same noise will repeat over and over for at least a minute straight. To say the least, it’s extremely annoying.

Guard Duty is an ambitious adventure game, inspired by the likes of Discworld and Monkey Island, that doesn’t quite reach its goal. Still, if you’re looking for a short, funny romp through two distinct worlds the game definitely delivers.

David is the kind of person to wear his heart on his sleeve. He can find positives in anything, like this is a person who loved Star Fox Zero to death. You’ll see him playing all kinds of games: AAAs, Indies, game jam games, games of all genres, and writing about them! Here. On this website. When not writing or playing games, you can find David making music, games, or enjoying a good book. David’s favorite games include NieR: Automata, Mother 3, and Gravity Rush.
Related Articles: Guard Duty, Indies
Share
Tweet
Share
Submit