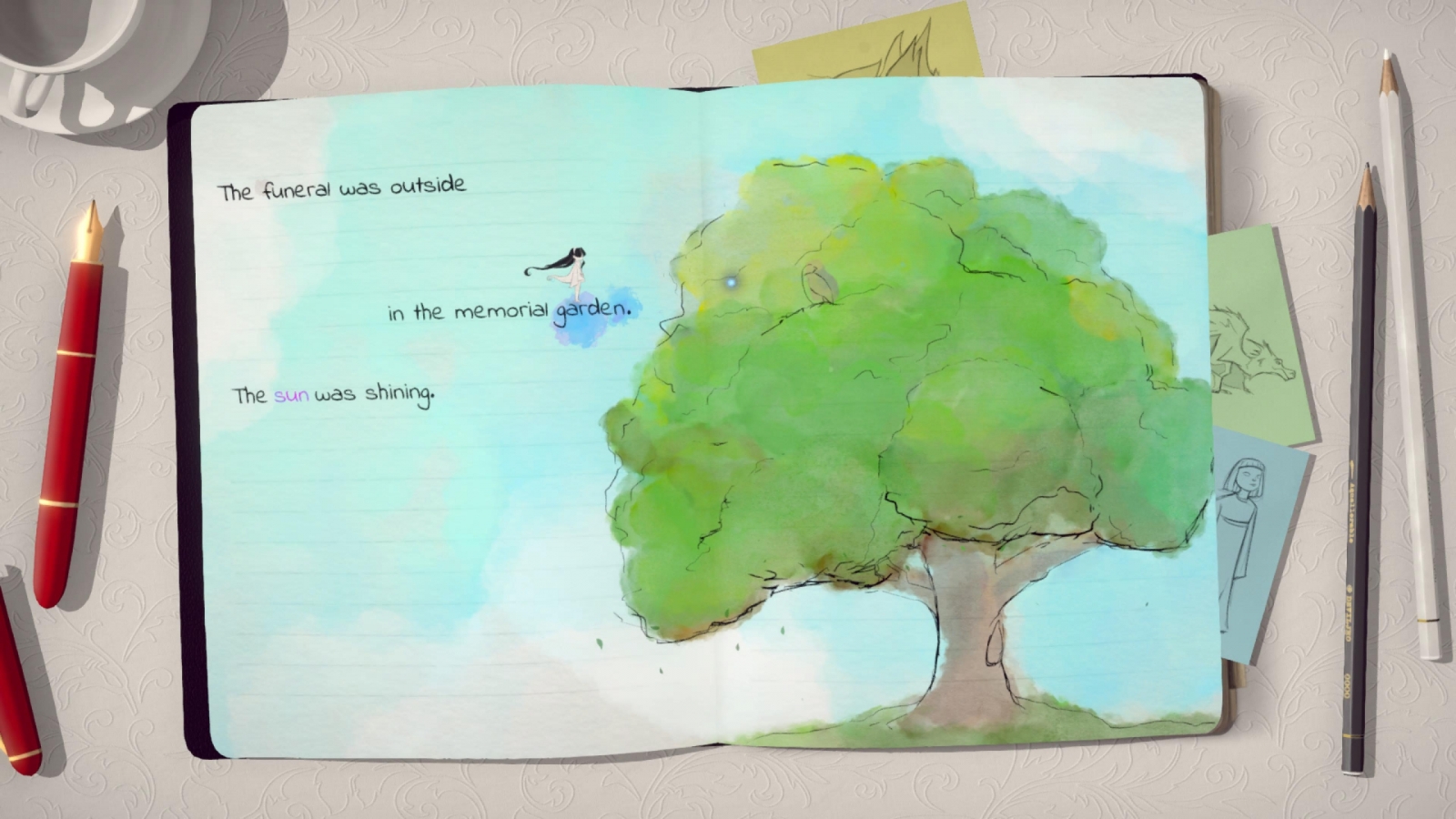 Grief can be a very complicated emotion, I’ve thought a lot about it in the past few years. Especially when someone close to you passes away, in the moment it feels like you’ll never be okay again, that the feeling will never go away. And that’s true. You will miss that person for the rest of your life, but I feel like that’s a good thing. Lost Words: Beyond the Page is a game that explores grief in a very human and realistic way. It certainly doesn’t pull any punches, but in a manner that could help kids process their emotions in a healthy way.

Lost Words follows Izzy, a young writer experiencing the death of her grandmother. She writes in a journal to cope, both what’s going on in her life and a story she wanted to show her gran. While the game is a 2D platformer, it’s largely split between these two sections: one in which you jump around the actual words on the page, and another where you play through the story in the world of Estoria. In the former, you jump on and collect highlighted words and objects to move things forward as well as making choices that affect the story such as the main character’s name. In the world of Izzy’s story, a girl who I named Robyn is chosen by the fireflies to become the next village guardian. Her first day on the job, a dragon attacks and burns her village down. For a reason of your choosing, in my case revenge, she goes after the dragon to confront it and collect the lost fireflies along the way.

The main gimmick in both styles is the ability to pick up certain words and use them to solve puzzles. For example, in the journal you may move a word around to serve as another platform or move the word key to a lock to open it. Robyn is carrying around a magic book from which you can use words more than once, such as Rise to move something up or Burn to light something on fire. It’s a really cool idea, but it unfortunately isn’t taken as far as other games with similar mechanics. In Estoria especially there’s only one type of object each word can be used on. No experimenting, combining words, or even much though; just use the “key” on the “door” to progress. While this is clearly a game intended for kids, I think even this simplicity might bore them after a while. I don’t think the game should be challenging per say, but some more varied and creative use of the words could have helped.

That thought somewhat encompasses the whole game. The story is great and heartfelt, but there are moments where it feels ham-fisted or the voice acting direction feels out of place. The platforming is simple and fun enough, but sometimes you just fall through the floor for no reason. I really want to like Lost Words more than I did, but these issues pop up far too frequently and bring down the highs this game could have reached. 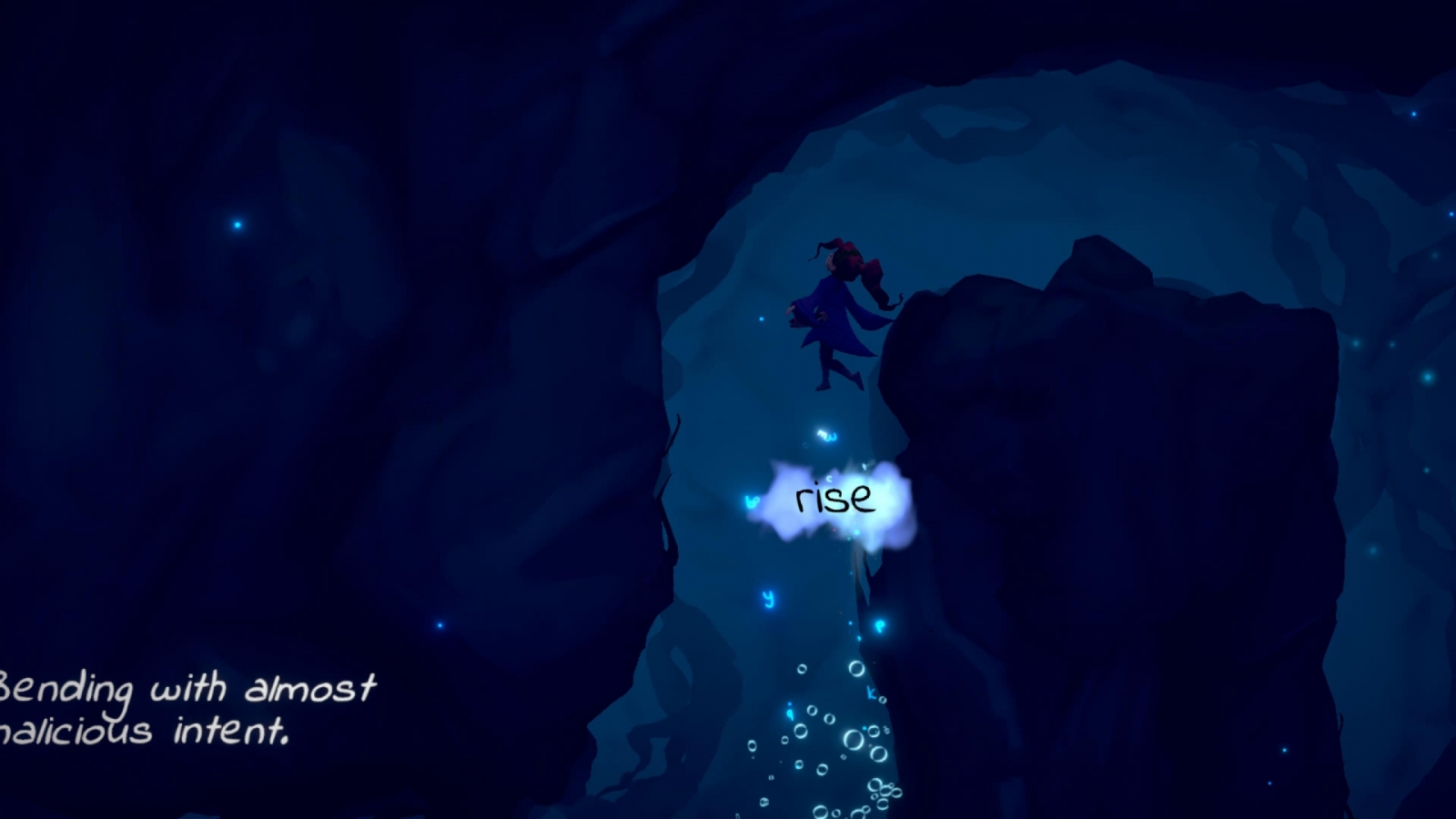 That being said, I still think it’s well worth giving a shot, especially for parents with children. Having been written in part by Rhianna Pratchett, the game excels at taking you through the grieving process in a safe and comfortable way that may help prepare some for when they inevitably have to experience it for themselves. I will admit that I got a little teared up playing the game and had to take a long break or two between some chapters even as an adult. Conversely, as an adult it was easier to see through the cracks in the story, specifically near the end where the steaks are elevated very suddenly and without any foreshadowing or sense. It’s good at emulating a child’s storytelling ability, both in a good way and a bad way. It’s more about the emotions than the actual plot.

Lost Words: Beyond the Page

Lost Words: Beyond the Page is a heartfelt and human exploration of grief. While it will certainly make you feel things, it stumbles a bit in the execution with ham fisted moments, glitches, and overall simplicity of puzzles.

David is the kind of person to wear his heart on his sleeve. He can find positives in anything, like this is a person who loved Star Fox Zero to death. You’ll see him playing all kinds of games: AAAs, Indies, game jam games, games of all genres, and writing about them! Here. On this website. When not writing or playing games, you can find David making music, games, or enjoying a good book. David’s favorite games include NieR: Automata, Mother 3, and Gravity Rush.
Related Articles: Indies, Lost Words: Beyond the Page
Share
Tweet
Share
Submit