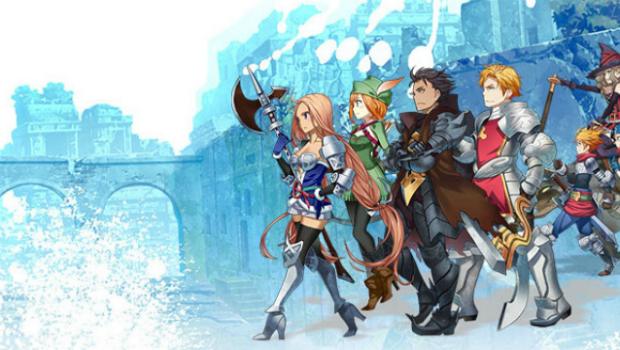 Unique is trope that gets tossed about like a warship glazing forcefully upon the battle-ripped oceans of territory mired in blood and death.  Grand Kingdom is a game that can wear the unique moniker prominently and with seriousness. I have never played anything quite like it before, even as a seasoned player of JRPG titles and in particular those from NIS America.  A mix of board game, JRPG, 2D fighter, and strategy elements blend together in a surprisingly seamless way that turns Grand Kingdom into a one-of-a-kind romp that is hard to put down.

Taking place in a war-torn continent that is in a constant state of conflict, Grand Kingdom is the story of a mercenary troop lead by the player, who take jobs and fight in the battles for each warring nation in lieu of trained soldiers, all in the pursuit of a few gold coins and some prestige. The jobs take on various forms and give different objectives, but the goal of riches and fame always stays constant.

The game places you in control of the characters you’ll use by making the “main” story characters non-playable.  Flint, a rough and foolhardy First Mate plays the part of trusted and loyal comrade.  Lillia, a wise and measured assistant, plays the straight man role and helps to guide you through various tasks and events.  Neither characters are active for battle, which leaves the actual makeup of the battle parties up to you entirely.

You are able to craft 6 distinct troops of either 2, 3 or 4 characters.  Some characters travel on a mount and therefore take up two slots.  Character creation is reminiscent of past NIS titles, where you are given a random selection of available class types and strengths, and the selections change each time you complete or fail a mission or event.  There aren’t a whole lot of unique options here, with your basic mage types, melee types, ranged types, support types, and the like.

Once you’ve crafted a team to your liking, you can send them out of quests to help the guild you are in, or to aid one of the four great nations who conduct the ongoing wars.  You can also sign contracts with those nations to take part in the wars themselves.  Each event takes place on a board-game esque overmap where you move a game piece along in “turns.”  As you move, the enemies and other entities on the board move with you, and victory and defeat is determined through various parameters, from staying alive to collecting resources, or simply making it to a certain point on the board in a specific number of turns.

This function has some very slight drawbacks, but I found that once I was able to master movement on the board, the strategy aspects of this gameplay element are as vast as they are fun to decipher.  There are times where I drifted towards boredom just moving around on an empty game board by myself, but for the most part, you are able to craft a nice strategy for battle and victory and be rewarded.

Encountering an enemy on this board sends you into battle, and they are truly something special.  Set on a two dimensional plane, with a front, middle, and back row, the characters and the enemies face off on opposite sides reminiscent of old fighting games like Mortal Kombat or Guilty Gear.  The battles are turn based, and a turn consists of moving your character across the battlefield towards the enemy and striking.  You do this on repeat until everyone in a group is dead.

You can set formations for your troop before battle, and this determines how far forward or back the characters will be when you start.  You can also place static items on the battlefield, such as walls, traps, signs, and other impediments.  However, everything affects everyone on the field of battle, so the traps, walls, poisons, and even your own character’s attacks can damage you as well as the enemy.  You have to be incredibly patient, smart, and detailed in order to perfect each battle, but scraping by on the skin of your teeth typically yields similar rewards.

In the more basic quests, enemies tend to fight in groups of 3-5 and there is typically a lack of area based traps and hazards.  However, some quests and the battles waged in the war mode are littered with geographic pitfalls and traps, and there are also siege weapons on the overmap that shoot projectiles onto the battlefield if your battle is triggered within their range.

This creates a battle environment that is almost totally different each time you engage, and provides you with endless ways to strategize and conquer.  In addition, your having the luxury of multiple squads means you can find strengths and weaknesses in each, and have a designated team for each battle.  Even with all my JRPG experience Grand Kingdom made me feel like a novice again in the best way, reminding me of a time where I first learned how to play Final Fantasy games on the PlayStation.  The combination of difficulty, intellectual challenge, and satisfaction in success makes Grand Kingdom an instant cult style obsession that will keep bring some dedicated gamers back for a decade or more.

The gameplay and battle elements of Grand Kingdom are supreme with very few hitches, and the overall story flow and look and feel don’t drag down that success in any way.  The anime style of the character design and the hand-drawn look of the backgrounds, characters, and storybook style images all provide a serious but cartoonish look, fitting the tone of the game well.

Stories in the game are told through a series of graphic novel-esque panels, with characters standing on either side of a rectangular image that acts as the setting and also conveys action.  This is a common form of storytelling used by NIS America done in a more stylized way, and I think it is a slight improvement on a rather bland form of presentation.  It is still not great, but a relatively impressive team of voice actors makes up for some of the lost detail there.

Lastly, the music of Grand Kingdom is large and verbose, instantly recognizable to those who play with some songs playing on loop that you’ll learn to love AND hate.  I think the composed sounds are lovely, however, with the battle music being particularly exciting and well crafted.

Grand Kingdom is a mostly one-player experience, but there are multiplayer elements mixed in through an online War mode.  The game’s main story and quests are all done in a single player fashion, and are a great way to make money and get experience.  Wars take your troops online and face them off against other players, though often you end up fighting CPU controlled versions of battle squads of other players.

Grand Kingdom is a grand triumph of innovation and amalgamation, standing alone as a semi-new type of JRPG altogether. Mixing elements from other JPRGs, classic fighting games, and board game elements into an all new experience, Grand Kingdom will have some dedicated players still moving troops through enemies lands for years to come.

Patrick Rost has been with Gaming Trend since 2013. At first focused on sports coverage, Patrick has gone on to cover a wide range of games and other products for the website. Outside of Gaming Trend, Patrick writes and records music, grinds perpetually in Elder Scrolls Online (PS4), and lives day to day with his two dogs, Bob and Stella.
Related Articles: Grand Kingdom
Share
Tweet
Share
Submit