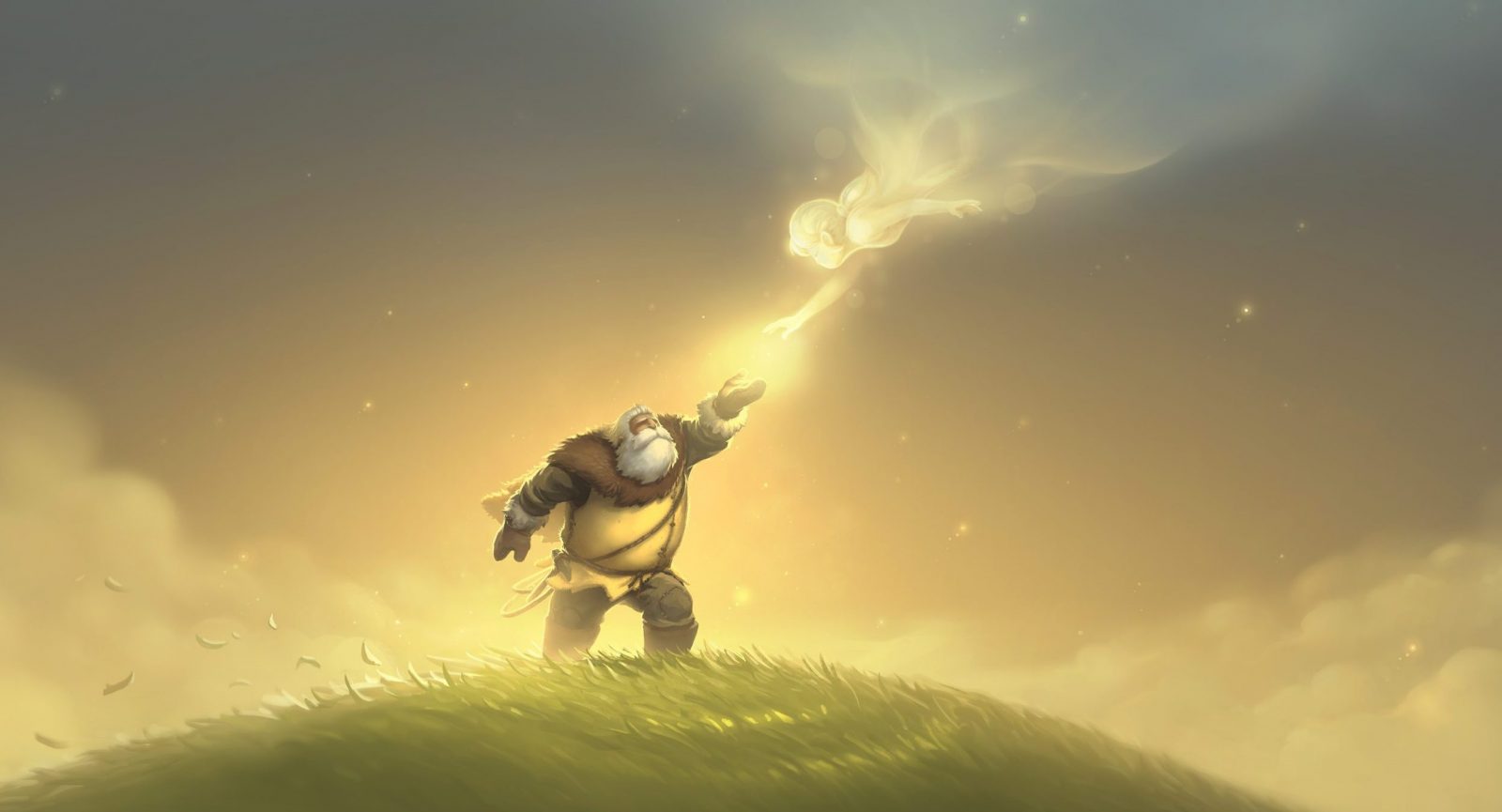 Arise: A Simple Story is so much more than the title implies, because nothing about life is simple. It’s a story about human nature, memories, and feeling a connection to those memories. Through the different chapters that act as the protagonist’s memories, you will feel an emotional pull for his wellbeing. As you try to understand his memories, you find yourself traversing some of the most beautiful landscapes and well thought out level designs in a simple platforming style game. Arise: A Simple story will surprise you in more ways than one.

This game is more than what’s on the surface. Mixed with simplistic platforming elements and a strong narrative, most of the in-game action comes in the form of manipulating time, which in turn allows you to manipulate the world around you. But don’t worry, the time manipulation is done in a way that enhances the overall tone and mood of the narrative. Its major selling point is its ability to tell that narrative story without the main protagonist having to say a word, and it works splendidly. Its narrative shines through the character’s fluid animations, the cleverly crafted levels, and game mechanics. To add to what’s already a recipe for excellence, the game’s score is simply amazing and embodies an emotional experience the developers set forth, regardless of which chapter you’re playing. 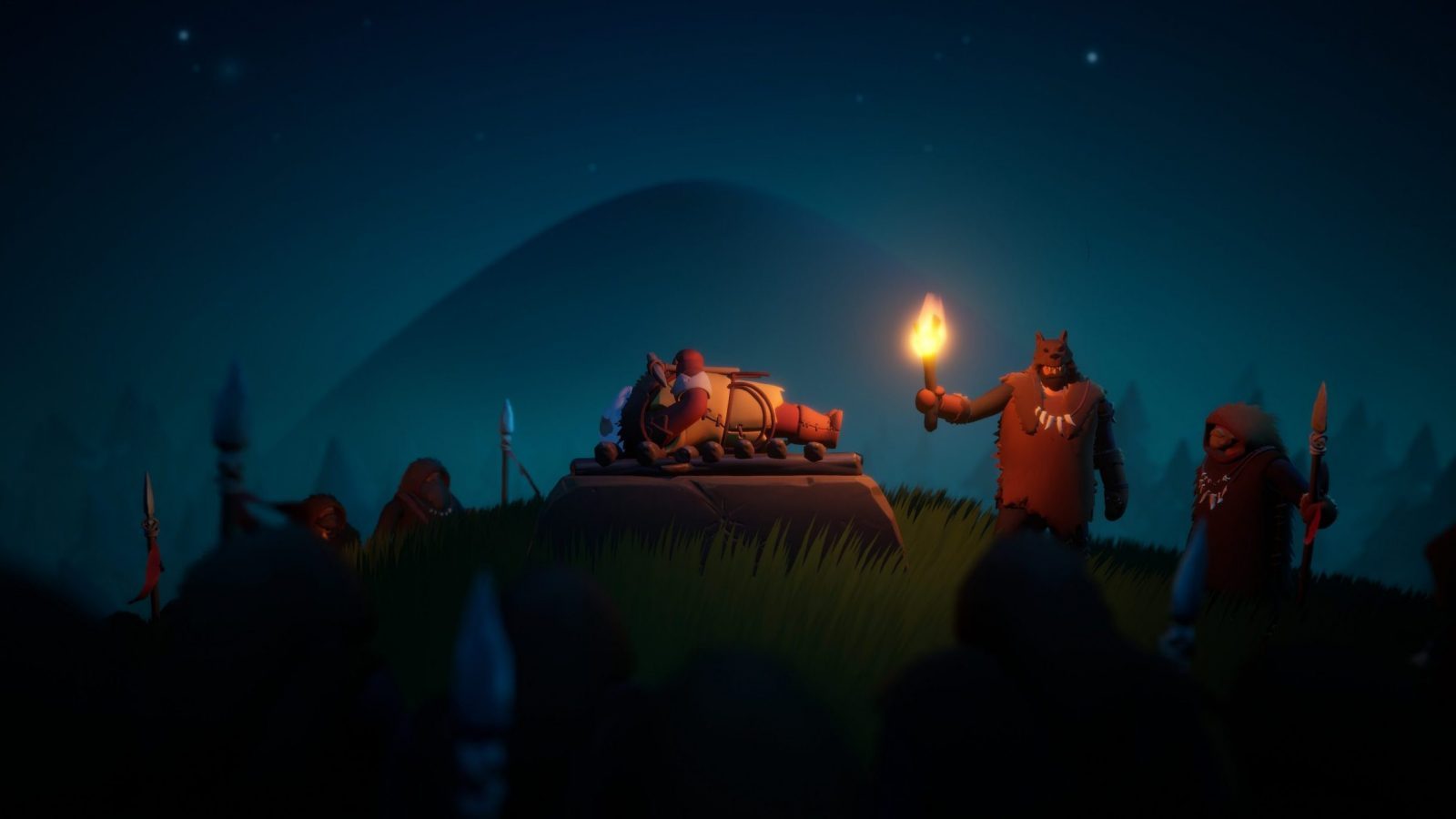 And you will be reborn

Arise: A Simple Story is broken down into chapters: memories, if you will. You begin the game and find the protagonist, an elderly man, being cremated by what looks to be his tribe. A somber and sad moment right before sending him off. Then suddenly, you find yourself in the frozen tundra, where a bright orb descends from above and awakens you. As you look around the quiet snow capped mountain range, you’re summoned to walk to an area that resonates with pulsating energy. Following the prompts on screen to interact with it, a rose made of snow rises at your feet and you are transported to another world. This is how every chapter, or memory, begins. I saw the frozen tundra as a place where all the dead found peace, but every player may see it differently. Completing a chapter will send you back to the frozen tundra to embark on another chapter/memory.

Experiencing the first memory, you are transported into a world where the hills are covered in luscious green grass and where water covers most of what you see – the complete opposite of the tundra you just left. Though it’s not an open world game, there is a sense of depth and openness due to the level design of the depth of field. There is a beautiful blend of colors and hues throughout the world that help set the tone and mood of each chapter/memory you experience. Some memories are bright and happy, where some memories are dark, sad, and tragic – and the way you interact with the world builds on top of that ambiance. 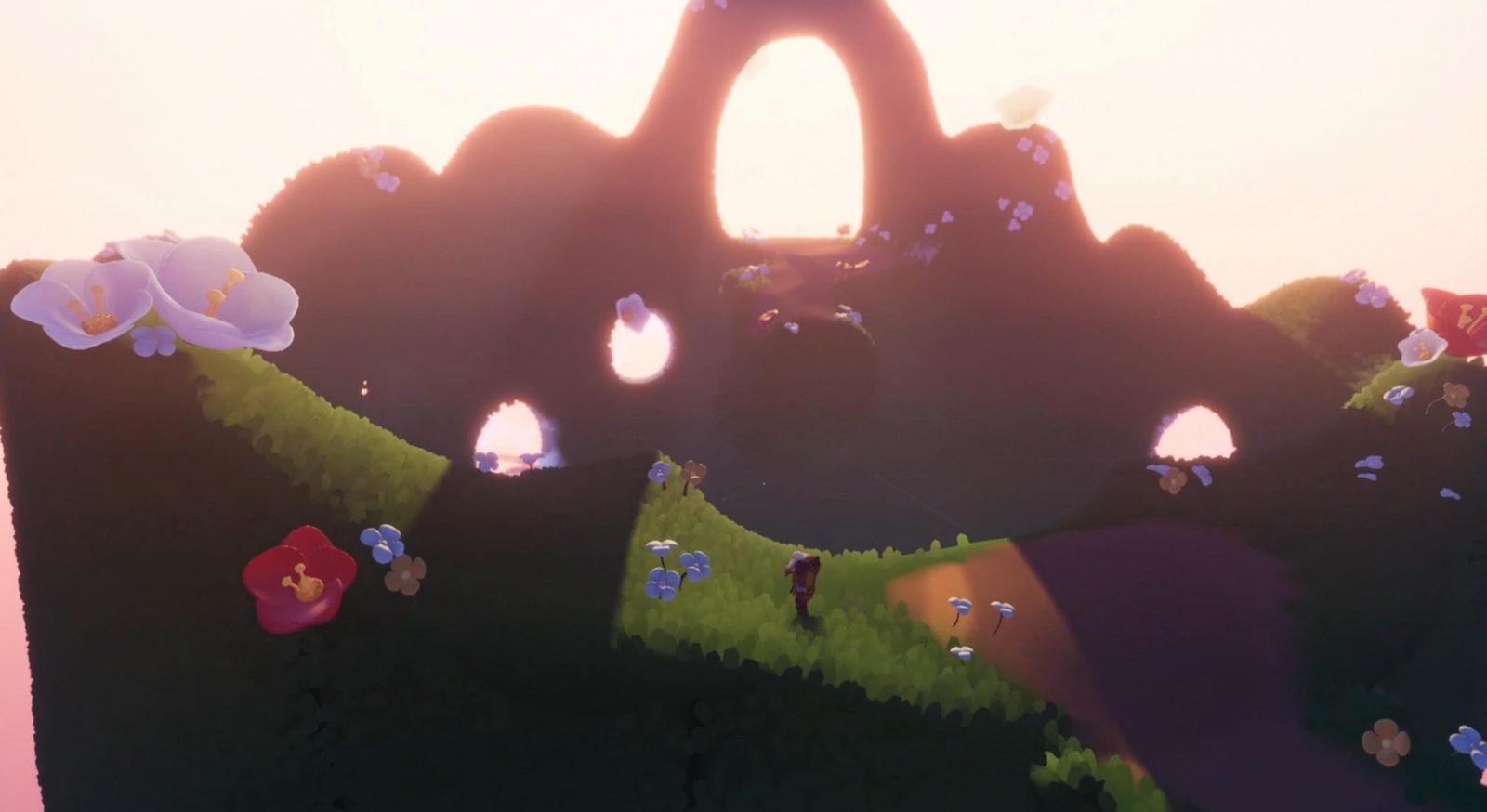 Manipulate time to find your way

As I moved further into the world, I was obliged to use the right thumbstick, and in doing so, the world began to change around me. Moving the right thumbstick to the left caused the little snow that was on the ground to melt, flowers to bloom, and the water to recede and expose areas of traversal. It’s simple time manipulation, but it affects how you traverse through the world. It is something we’ve seen before in games, but because Arise solely relies on the levels and memories found to tell the story, it adds a sense of necessity to the gameplay.

Many of the levels offer different challenges that require you to manipulate the world around you. Feeling like I was in the movie Honey I Shrunk the Kids, objects in the levels are larger than life, making it easy to traverse and take in all its splendor. Some levels have giant sunflowers that you must tilt in your direction for you to leap onto, some have bees that fly overhead that require you to use your grapple to attach to them to catch a lift, and other more difficult levels require you to stop, slow, or freeze objects as they fall so that you can lift yourself or swing from one area to the next. And to help illustrate the changes in the world, seasons are used to show how manipulating time changes the world around you. Each memory you visit has smaller memories scattered throughout the world for you to find. Often, they are memories of what looks like him as a child with his soon to be girlfriend/wife. As you collect them, they help paint a picture of how the old man and his wife made it through the good and bad times. You see, the game is about experiencing life; the good and the bad. 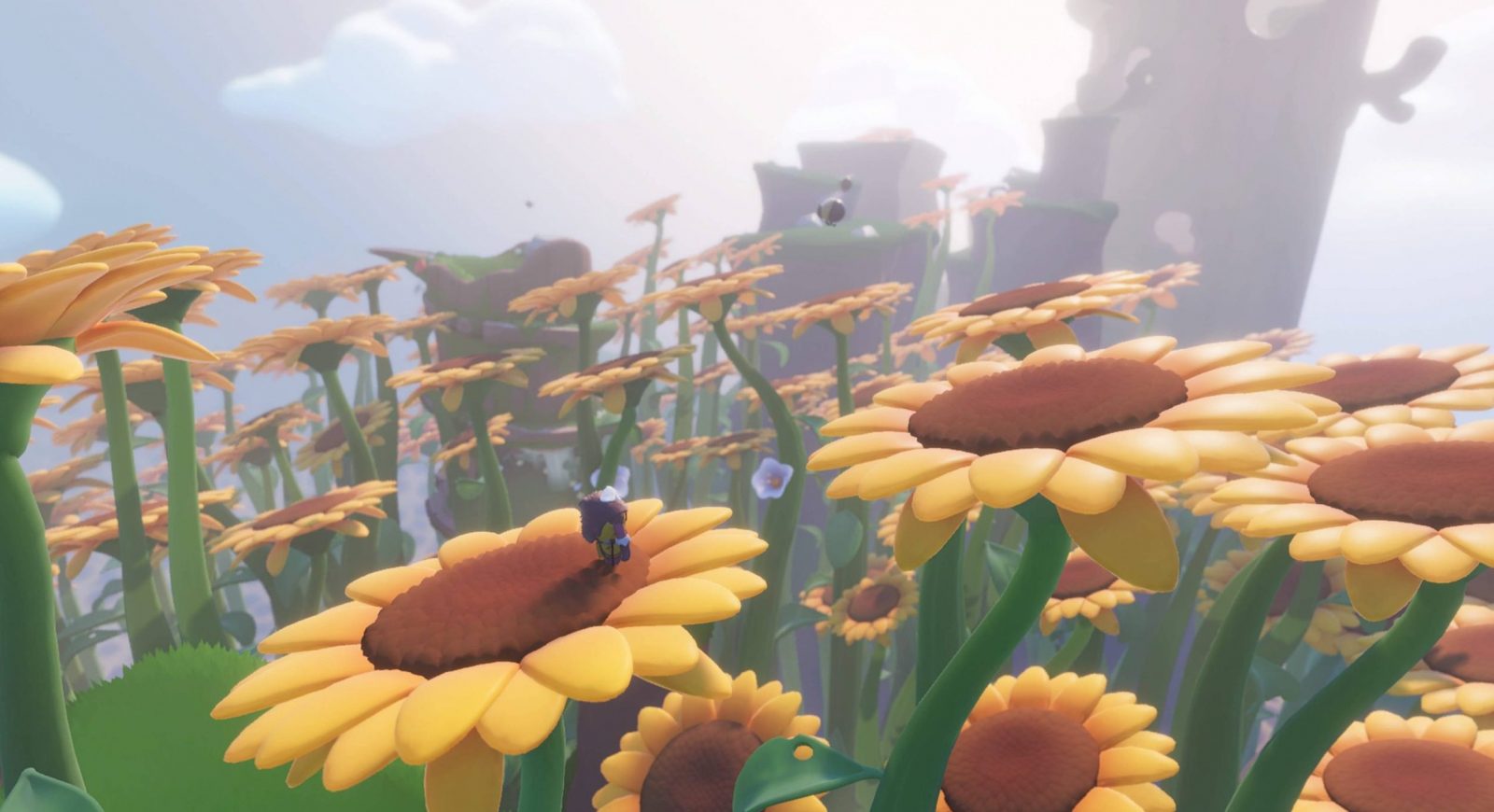 Each memory that you experience brings its own troublesome ways of traversing the different levels you encounter. And this is where the weak points of the game show. With platforming elements such as climbing, jumping, and leaping onto objects being the main game mechanics, I found it frustrating because the camera control is very restricted. Because the right thumbstick is used for rewinding and fast-forwarding time, camera control is limited to a simple tilt. And for a game that relies on platforming mechanics, this causes many frustrating challenges. Also, the use of shadows in platforming games is important because it allows the player to line up and visualize where the character is in the 3D world, but the game doesn’t make use of shadows well. So, expect to die, and die often. By the end of the game, I found myself caring more and more about what happened to the protagonist and those he touched.

Outside of finding the glowing orbs in the world that are memories, there isn’t much else to the game in the sense of collectables. In a world that’s as beautiful as Arise, it’s a shame that there wasn’t more to do in the levels. Because the worlds/memories that you get to experience feel so inviting, you often want to explore and see what else there is to experience, but sadly there isn’t anything else. I would love to see these worlds fleshed out and used to their full extent.

Likening this game to the movie Up, Arise: A Simple Story is much more than what its title lets on. It forces us to take a step back and analyze life. With its time control mechanics that manipulate the world in so many ways, platforming style of play, and its ability to tell a narrative story without dialogue, Arise is one of those games that makes you question whether small titles like this are becoming the status quo.

T.K. is a freelance writer, narrative designer, and author. Writing and developing narratives and giving voices to digital world and characters is his passion. As a game writer, QA game analyst, and editor for Gaming Trend, he enjoys being a part of the gaming industry.
Related Articles: Arise: A Simple Story, Indies
Share
Tweet
Share
Submit