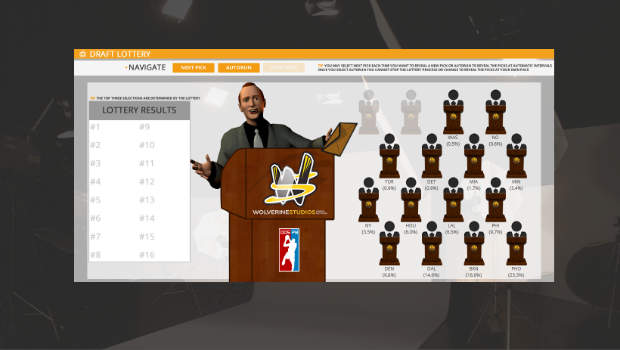 If you’re wondering how it would feel to become one of the lucky few who play sports simulation games, you can try a simple test before diving in headfirst.  Take about five or so dollars, go online and buy a full set of basketball cards from, like, 1993.  Now, take some whiteout and cover up all the action scenes on the front, and all of the logos and team names as well.  Turn them all around and just spend the next few hours staring at the box scores, season stat lines, and player measurables and get a good feel for all those numbers and stats and abbreviations (abbrevs’ for the initiated.)  Now, go back into to each card and write in the team name and logo that you want for each one, painstakingly.  After this is all done, turn the cards back over and look at the numbers again.

There is not a whole lot of people out in the world who’ll go through all of that and feel accomplished.  For a hardcore sports nerd, that scenario might teeter on paradise.  Draft Day Sports: Pro Basketball 16, the latest simulation effort from Wolverine Studios, falls short of paradise itself but covers the relatively under served game of basketball in the simulation world with competent design and excellent gameplay mechanics, slightly diminished by a series of bugs and crashes.

Sports simulation games are very similar no matter the sport, developer, or year released.  If you’ve played one before, then you’ve basically played them all.  For those who’ve not yet tried a game of this style, the game forfeits sports “action” for sports “management,” placing you in the seat of the general manager and giving you full control of the teams from the ground up.  You are able to fully customize the world that you play in, but the focus is on team-building and strategy between games, rather than with the games themselves.

Draft Day Sports: Pro Basketball 16 is no different in that way, and provides a deep and fully customizable world that has become the standard for sports simulation titles.  Players have full control over the team members and personnel, as well as the individual decisions at each level of the team building process.  DDS:PB16 does a less than admirable job making these things intuitive, however, and you will inevitably find yourself searching for option buttons or the correct menus for longer than you’re actually doing things that matter to the game.

The simulations are really tight and realistic, with player stats being realistically delivered over a game, stretch of games, or a full season.  Team stats, game scores, and the overall progression of players is very clean. The clean simulations with the realistic events provides the player with the ability to fully plan and team build in their own way and have faith that the numbers and outcomes are the results of their planning, as opposed to bad sims.

The problems with DDS:PB16 might keep you from getting through a season, however.  A litany of clarity options in terms of menu navigation can leave you confused, and often times I would think I had done something and found that it had reverted back because I had not done it correctly.  User error is common here, so not every problem that occurs is the game’s fault, but a less intuitive gaming sim leads to a lot of blank space and dead air.

Even if you get through all of the team planning sections without errors, the game crashes during simulations regularly.  It seems that the crashes during simulations happens more often with the longer timeframe being simmed, but it can still occur even with a single day sim.  There is a “Top Ten” power ranking style page you can access from your “homepage” and this also causes the game to crash about 3 times out of 5.  Little things like that can be solved, hopefully, but until they do they pose a huge problem, especially since a crash completely removes you from the program.

In terms of design, Wolverine Studio gets a more mixed grade.  I loved the way everything looked visually.  The menus are clear and easy to read, and the false team logos for the in-game franchises are top-notch, with a few being so well designed that they would be ample replacements for their real-world counterparts.  However, other design elements are not so attractive, and the menus do have the previously mentioned navigation issues.

There is very little emphasis on the extras, but the courts and “player animations” consisting of boxes moving across a static image is actually pretty nice, simple, and gets the job done.  DDS:PB16 is by far the most user friendly in terms of team customization, giving you actual in-game options to change logos, courts, and jerseys, as well as team colors, names, and information, as opposed to doing things through file-swaps.  The one biggest lack in terms of “immersion” is with player personality, with it almost entirely lacking except for a few occasional blurbs in a twitter-style ticker on the side of the screen.

Draft Day Sports: Pro Basketball 16 provides a competent but incomplete basketball simulation experience. Featuring a few bugs, glitches, and crashes, the game does manage to overcome those flaws with an excellent and accurate simulation system and simple customization options.

Patrick Rost has been with Gaming Trend since 2013. At first focused on sports coverage, Patrick has gone on to cover a wide range of games and other products for the website. Outside of Gaming Trend, Patrick writes and records music, grinds perpetually in Elder Scrolls Online (PS4), and lives day to day with his two dogs, Bob and Stella.
Related Articles: Draft Day Sports: Pro Basketball 16
Share
Tweet
Share
Submit