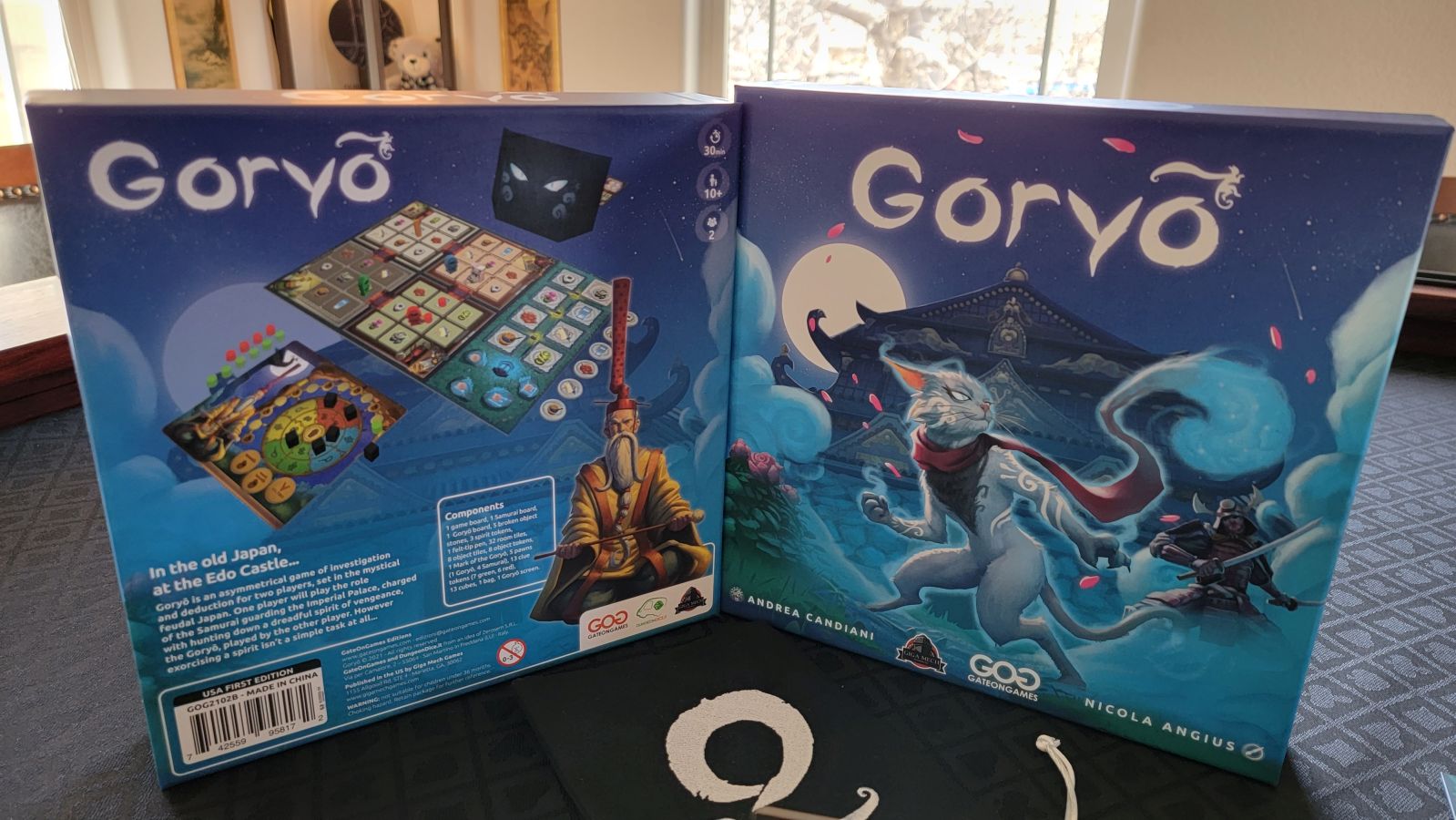 My initial experience with Goryõ was at a booth presented by Bridge Distribution and Fulfillment. I was apprehensive at first because being allergic to cats I have developed an apprehension towards them, and the goryõ is represented by a cat! After playing a few rounds, I realized my apprehension was misguided and my perception quickly changed. I was happy to admit I was wrong. Goryo drew me in with its fascinating hidden movement style of play, engaging tug-of-war mechanics, and excellent and beautiful board and piece design. Even though it’s not a large board game, the excellent craftsmanship and efficient design serves as a blueprint for what companies can bring no matter the size.

Goryõ–produced by Gate On Games, developed by Andrea Candiani, and illustrated by Nicola Angius–provides an imaginative take on the hidden movement genre. You’re given a beautifully colored temple board, an artistic player screen to keep the goryõ’s movement a secret, striking plastic pieces, and a small profile that makes portability and table presence a lot more unique when compared to other hidden movement games. Thankfully, a game takes about 30 minutes to finish allowing players to get in multiple games instead of spending an entire day playing. 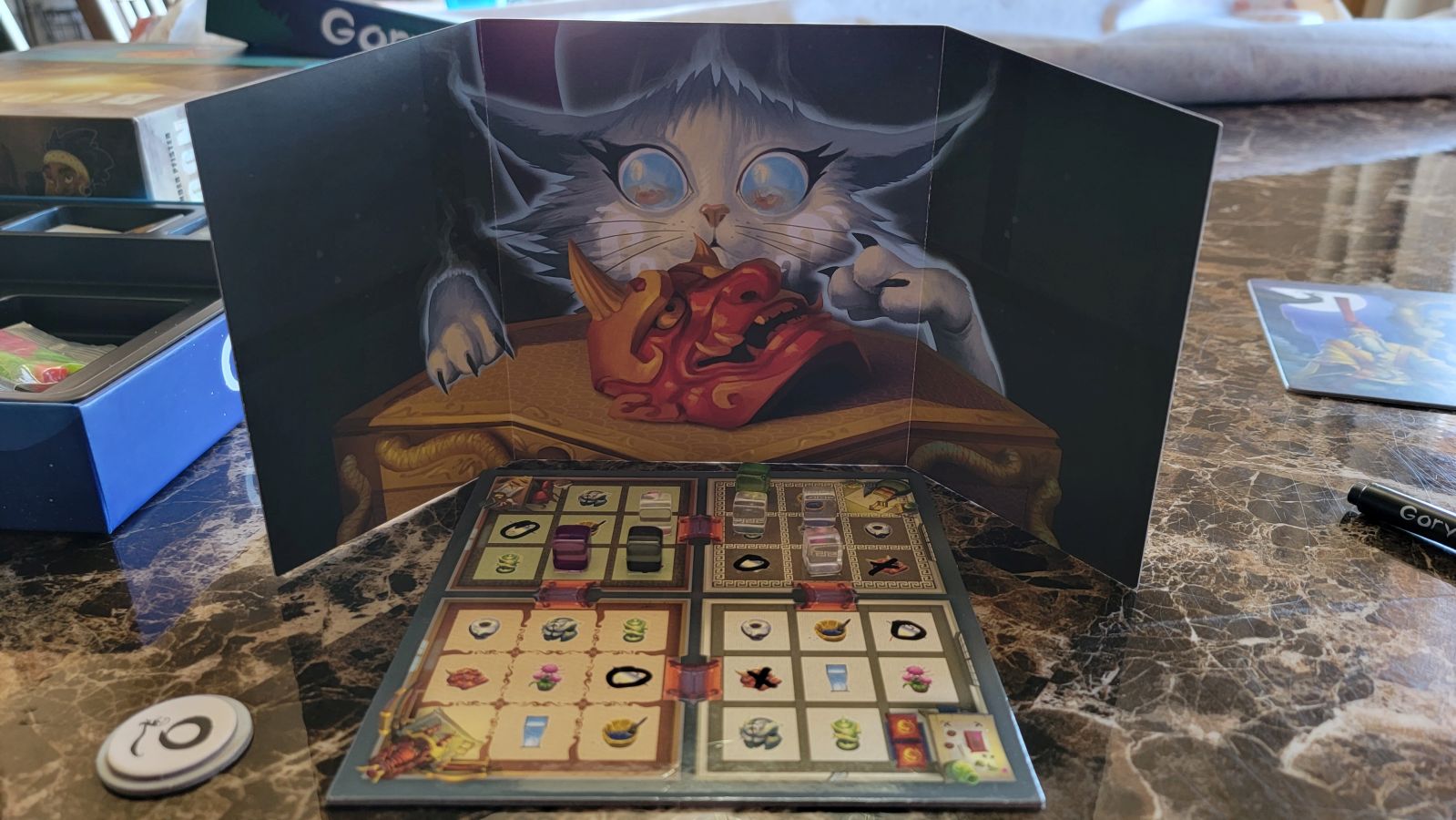 Players take turns starting with the spirit players turn. dynamic. This involves the player using their movement cubes behind a screen on their board which is identical to the main board. They are given a certain amount of cubes for movement, and are required to use them all to move the goryõ in an attempt to break a new object. Once all of the movement cubes are used, the player that controls the samurai takes six actions. Each of these actions are used to figure out where the goryõ has moved to. These actions include moving a samurai, exploring the space a specific samurai is currently on, or exploring a space adjacent to one of the samurai.

After taking those six actions, the goryõ player lifts their screen and reveals where they decided to move. Various things happen here if one player finds the other, or if one player successfully evades the other. These might include the samurai player being able to seal an artifact, or the goryõ player breaking an artifact, thus moving one step closer to their victory. Sealing an artifact here allows the samurai to make one of eight artifacts off limits to the goryõ. This is important because as more artifacts get sealed, the goryõ has less space to move and break items.

Once the samurai player has either found their counterpart or failed, the round progresses and the goryõ either breaks an object or is caught for the round. If the goryõ breaks four objects, they win. If they are caught the item still breaks but awards the samurai player more tokens towards sealing the rest of the objects to finally thwart the goryõ. 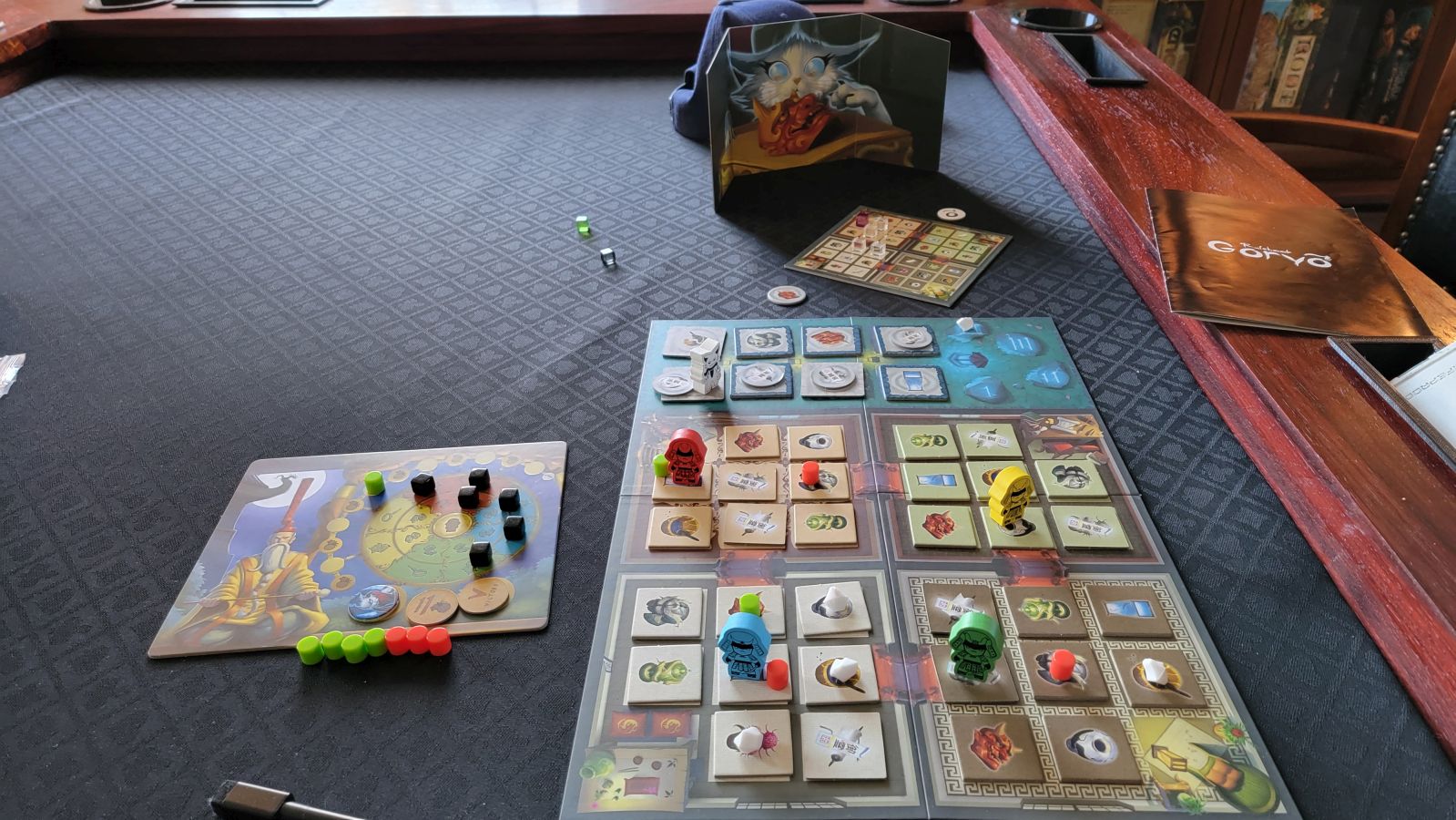 This struggle between each player also provided an immersion in the world and enthusiastically encouraged us to step into our respective roles and enjoy the roleplay. Playing as the goryõ compelled me to become a little conniving, while playing as the Samurai brought great joy when I caught the goryo in its vandalism. It was much needed respite from other games that rely on gimmicks. 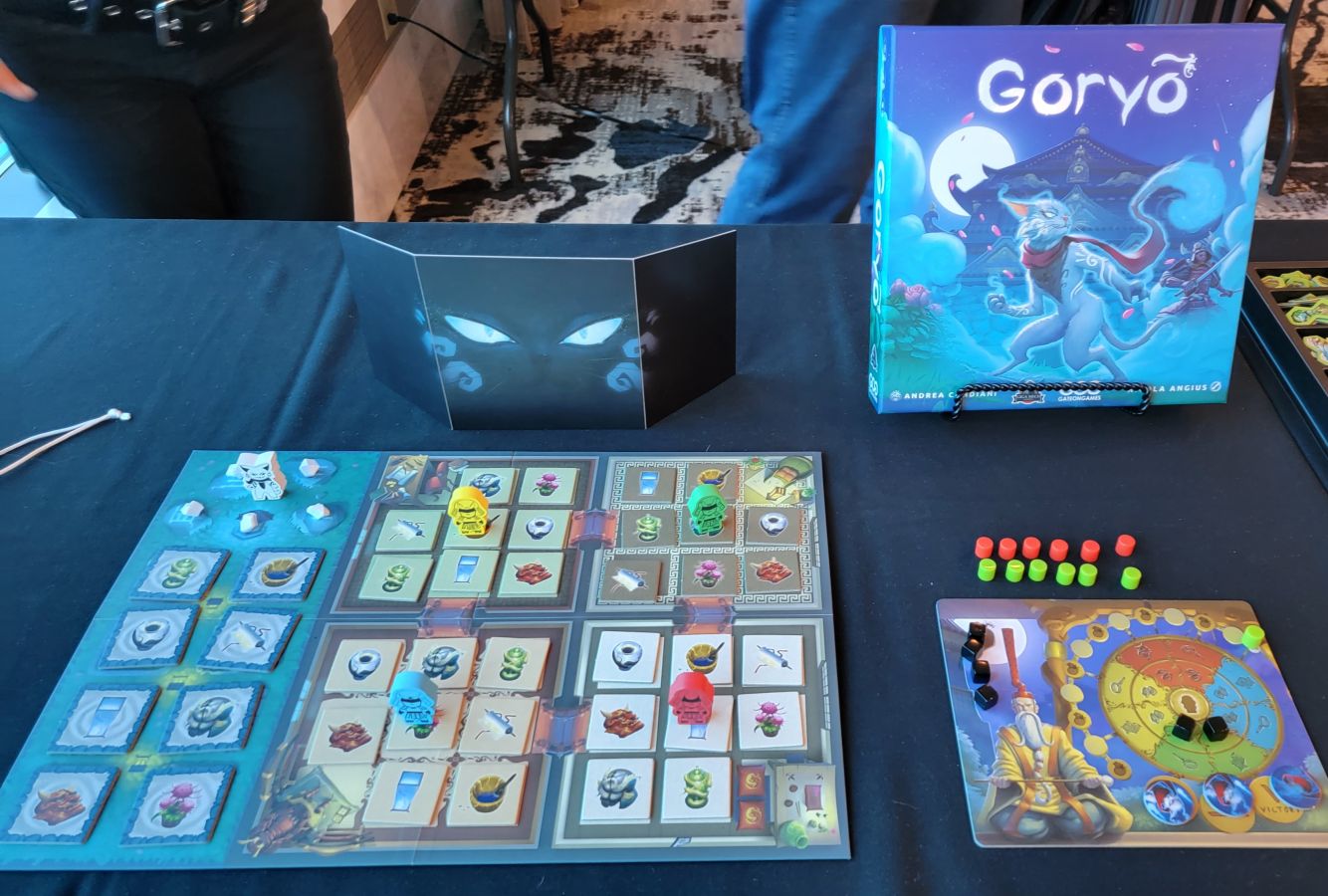 The rule book for Goryõ presented its own challenges when learning the game, and understanding the rules. From sentences that need better translations, to another section of the rule book dedicated to some clarifications of actions and what happens within the game. Each game is only 30 minutes, but it’s a grueling 30 minutes when you’re trying to understand Goryo as well as understanding the rules explaining the game. I was also a little annoyed by the board design. The board doesn’t change from game to game. The double sided artifact tiles provide an extra component that could be printed on the board instead and utilize seal tokens instead of double sided artifact tiles, instead of being an extra part of set up at the beginning could translate into tokens that represent a board state as the game progresses.

With that said, the board and its pieces are ridiculously stunning. Included is an insert for pieces in the box, plastic pieces and cubes, cardboard tiles for the map, and wood tokens to represent the goryõ and the samurai to go on the board. Included for the goryõ player is a wonderful screen to hide their dry erase version of the main board. The insert provides plenty of space for each piece and fits everything snug in the box.

In the end, my experience with Goryõ is mostly positive. With a box that is relatively small and a smaller table presence than most, Goryõ is a fantastic addition and I cannot recommend it enough. What starts as confusing, unbalanced, and hard to undertake, becomes brilliantly tactical and incredibly immersive. With great pieces and fantastic production value, the insert, Goryo serves as the blueprint for what companies can bring to the table.