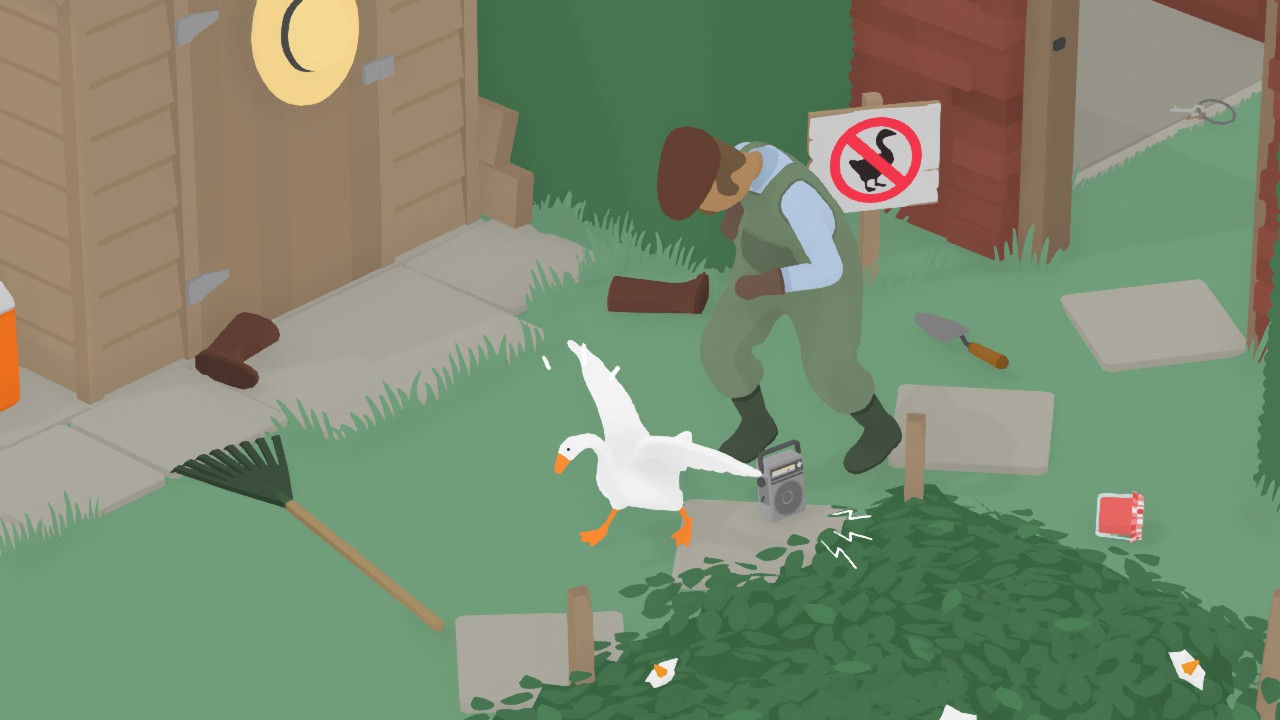 One of the great things about video games, it’s often said, is that they let players inhabit different roles and have new experiences that they never could in real life. But so many stick to mundane fantasies like being a star athlete, a city planner, or someone who’s just really good at shooting guns that none of it feels particularly transformative. Even playing as a wizard slinging spells or a starship pilot fighting back aliens starts to feel ordinary once you’ve done it a few dozen times. Enter Untitled Goose Game, which dares to fulfill a fantasy no other game has attempted, and most players probably didn’t even know they had: that of casually but absolutely dismantling a small village bit by bit in the body of a persistent but otherwise unremarkable goose.

Playing Untitled Goose Game is as simple as can be. You can run, you can honk, you can duck, you can pick things up, and you can flap your wings. Anyone picking up the controller for the first time would have all the nuance down in about a minute. Untitled Goose Game isn’t about dazzling you with mechanical complexity, nor is it about over-the-top silliness and sheer anarchy like the similarly animal antics-based Goat Simulator. It’s about executing one simple idea (you are a goose who is here to wreck things) as well as possible, seeing how far it can be stretched, and committing completely to the bit.

You’re not just any goose in Untitled Goose Game. You’re a particularly organized goose with a to-do list directing you toward your single-minded mission of upsetting the lives of everyone around you to the best of your ability. The list starts out simple, with tasks like “get into the garden” or “rake in the lake.” (There’s a rake. There’s a lake. You figure it out.) Even in that first list, there are less obvious entries, like “make the groundskeeper wear his sun hat,” and soon you’ll be tackling objectives like “get on TV,” “make someone buy back their own stuff,” and “get awarded a flower.” There’s a satisfying balance between simple tasks that you can complete almost unconsciously and more complex goals that require careful planning, ingenuity, or sometimes just a whole lot of theft and honking to check off. A few objectives in the mix are a little too abstract and require an almost point-and-click-like process of just trying everything and seeing what sticks, but for the most part, the game flows perfectly from one bit of adorable carnage to another, and it feels excellent.

Once you check off enough items in one of the game’s areas (a garden, a shopping street, a backyard, a pub), you’ll get a final objective that leads you to the next part of town. You also open gates to connect these areas back to one another (setting up the most tenuous Dark Souls comparison of all time), so you can bring favorite tools like a radio or a pair of walkie talkies from one zone to the others for more involved shenanigans. The whole thing only takes a few hours, after which you unlock some surprisingly challenging bonus objectives, but it’s still fun to go back and stir up trouble even after you’ve reached the end.

A lot of Untitled Goose Game’s charm comes from that simplicity. There’s a straight-faced sense of humor that permeates the whole game, a subtle comic timing that makes it almost impossible not to laugh when you break a shopkeeper’s broom and use it to lure and trap her in a garage or get two neighbors to blame each other for your schemes. That makes it particularly fun to play with an audience, whether you’re passing the controller around or just showing off your best human-annoyance routine. It’s funny to trip a hapless boy in a puddle then chase him into a telephone booth or trick a woman into tying a bow around your neck then burst into exuberant honks and flaps once she does it; no further embellishment needed.

But while it’s unembellished, Untitled Goose Game is by no means stark. While it has almost no UI, absolutely no story, and sparse sound design, everything feels not just intentional, but labored over. The simplistic character models all have incredible animations, especially your goose, which makes the havoc you cause that much more convincing, and far more enjoyable. Even the way the camera moves to follow you or frame your surroundings feels full of personality. Maybe more than anything else, every sound you hear in Untitled Goose Game feels like either a setup or a punchline to the game-length joke you’re playing. The slaps of your webbed feet on the ground and even your honks change based on your terrain or what you’re holding in your beak, and the reactive soundtrack underscores your antics with quiet jabs of piano when you’re sneaking around, growing increasingly chaotic as you start to tear the world around you apart or attract the attention of villagers eager to shoo you away and just get on with their otherwise leisurely lives.

If there’s anything deeper than the sheer joy of its madcap puzzle solving to take from Untitled Goose Game, maybe it’s the idea that in some way, you’re doing these people a favor. They seem content to spend their time eternally tending the same garden, reading the same paper, or hauling boxes at work until you show up like a honking trickster god to shake them out of the status quo. You might give them a hard time, but you never leave them with anything worse than a good story to tell later. Or maybe you can view yourself as an avatar of nature itself, here to punish the human interlopers and bring the primal chaos of the wilds back to this place that they dared turn into a staid concrete prison. Most likely, though, you’re just a goose trying to pass the time the best way you know how, just like your human playthings.

Untitled Goose Game proves that you don’t need complex mechanics or an involved story to make a great game. It takes a simple premise — you’re a goose here to make trouble — and spins it out into a short but extremely satisfying slapstick journey. Untitled Goose Game is effortlessly funny, succeeding as much on its physical comedy as its clever puzzles.

A committed indoor kid, Bryan moved from Pittsburgh to Los Angeles for a prettier landscape to ignore. They can be lured outside with promises of taco trucks and film festivals, and enjoy trawling through used book stores for works on the occult. Bryan has been gaming since the SNES era and is a sucker for good pixel art.
Related Articles: Untitled Goose Game
Share
Tweet
Share
Submit