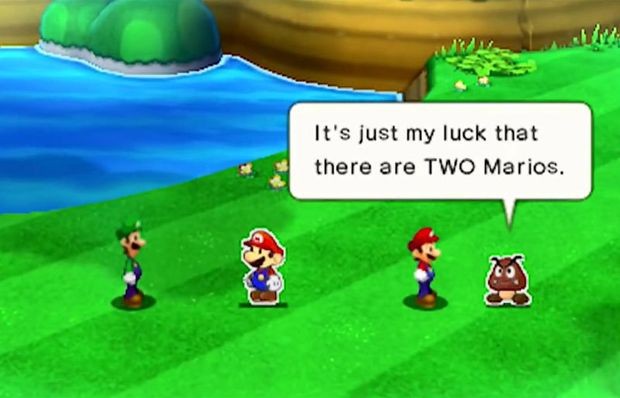 We’ve seen a lot of Mario crossovers over the years, but Mario & Luigi: Paper Jam takes a very unique approach by crossing Mario, with, well…Mario. The Paper Mario and Mario & Luigi series are both known for their RPG mechanics, so Paper Jam attempts to combine the best elements from both worlds to create something new. While the core battle system and RPG mechanics are incredibly well-done, it is held back by annoying blocks of gameplay and a wholly uninteresting story.

The plot of Mario & Luigi: Paper Jam begins when Luigi and a Toad discover an old tome in a dusty cellar and accidentally unleash its power. The world of Paper Mario comes pouring out, and Mario, Luigi, and Paper Mario embark on a quest to find all of the lost Toads. Unfortunately, Paper Bowser and all of his paper minions join forces with the Bowser and the minions occupying the real world to create one of the fiercest armies that Mario and company have fought so far. Along the way, Princess Peach and Paper Princess Peach are both captured, and from there things get very familiar in terms of storyline.

While the familiar plot isn’t an issue, unfortunately the entire affair isn’t particularly interesting. The entire game focuses on a trek from Peach’s castle to Bowser’s castle, with annoyances of every kind along the way. Each area is large, empty, and filled with superfluous impasses that usually require grinding minigames to resolve. The whole affair ends up being linear to a fault, and more annoying than it is entertaining.

Which brings us to Mario & Luigi: Paper Jam’s biggest issue: minigames. I’m a fan of minigames myself, but Paper Jam takes minigames to the next level by needlessly inserting an almost endless grind of minigames into every facet of the experience. “Toad Hunts,” which require Mario and company to play a game of hide-and-seek with paper toads, run rampant, inserting themselves into literally every section of gameplay, even the opening sequence. Even worse are the minigames that are forced upon the player by the Lakitus, which have you doing everything from literally herding a bunch of unruly Toads within a time limit, or even enduring stealth-based minigames. Oh, and did I mention that there are even minigames inside of other minigames? Seriously. As a result, Mario & Luigi: Paper Jam’s pacing is dragged down by relentless tedium.

This issue is further compounded by the lack of interesting characters or humorous dialogue. Mario & Luigi: Paper Jam describes itself as a comedy game, but the dialogue falls flat consistently throughout the game in a way that I haven’t experienced in previous entries in the series. This is especially disappointing since there are so many opportunities for the game’s comedic premise to shine, for example, when Peach meets her paper twin, or when Bowser’s minions mistake Paper Bowser for their master. Instead players are given a veritable trove of bland exposition and missed opportunities.

Mario & Luigi: Paper Jam’s saving grace is that it has perfected the turn-based battle system of its predecessors. In addition to the usual attack/counter system, the Mario, Luigi, and Paper Mario can work together with Bros. Attacks, devastating Trio Attacks, and rely on the battle-card system that allows the player to augment battle using consumables. Dealing with incoming attacks gets very creative in some parts, like during the paper airplane escape sequences, where Mario and Luigi must use Paper Mario as a floatation device to dodge incoming attacks.
Amiibo support also adds flavor to battle, as the player can call in Amiibo characters to assist them. Using an Amiibo unlocks special battle-cards with devastating effects, like dealing damage to all enemies in play, or making copies of Paper Mario.

Mario & Luigi: Paper Jam excels at RPG combat, but is bogged down by tedious minigames and a disappointing story.

You know that jerk online that relentlessly trash talks you after every kill? That guy was probably Travis "Tie Guy" Northup. Competitive, snarky, and constantly wearing a tie, Travis has been writing his opinions about electronic media since he was a teenager, and is pretty much the only person to hold his opinions in high regard.
Related Articles: Mario & Luigi: Paper Jam
Share
Tweet
Share
Submit