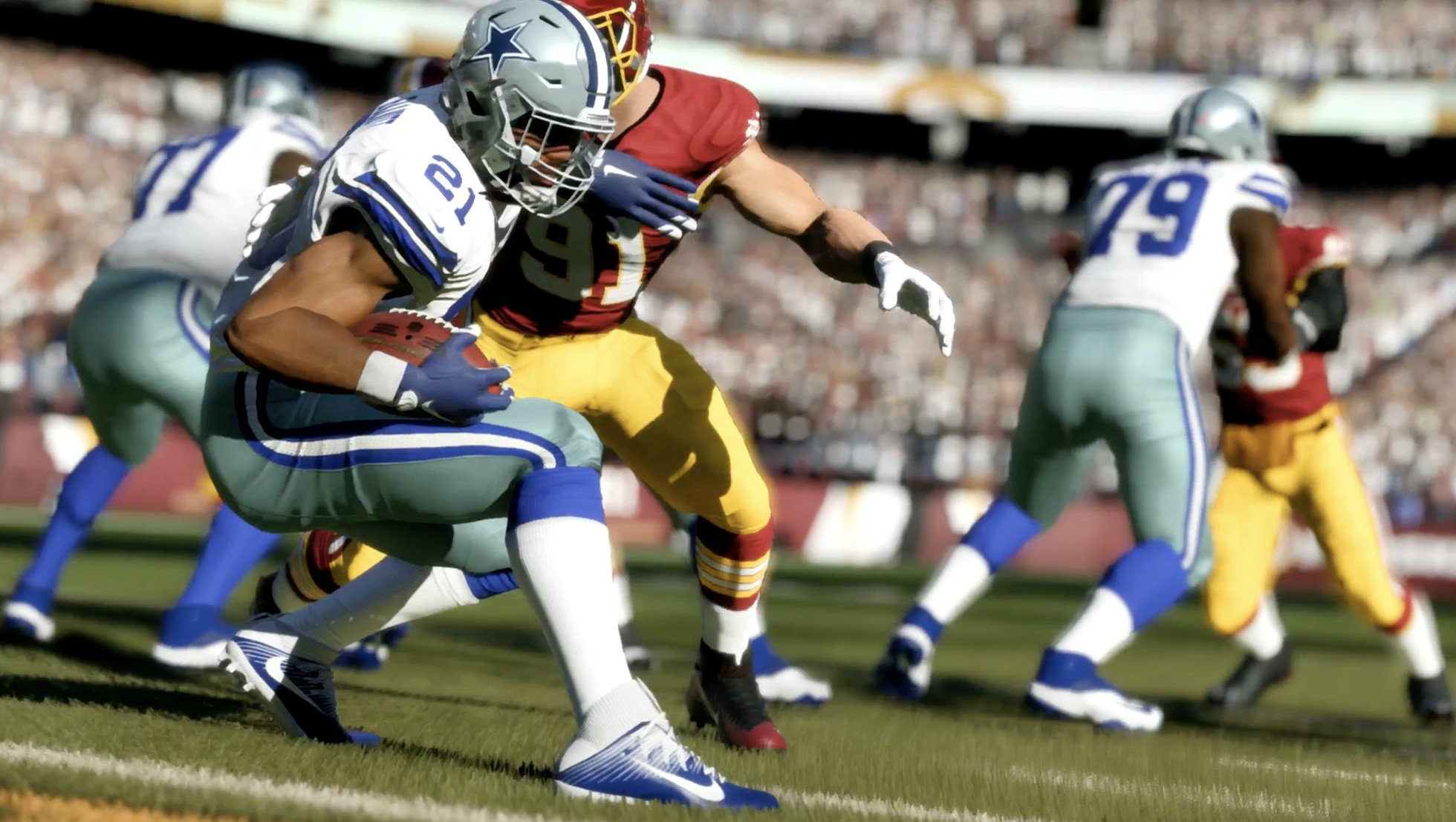 There is a lot to unpack with the entirety of this newest Madden release, Madden 18, and overall I’m happy to say that mostly positive things are to be said about the game for once. However, there is one new and distinct game mode that bears special attention. A movie within a game within a game, NFL Longshot is a surreal, terrible expulsion of over-the-top campy nonsense. What more could you ask for?

Altogether, this Madden release has some truly awesome features that have enhanced the actual gameplay to levels I didn’t expect, having been away from the series for a few years. Combining the high level execution of the gameplay with the ultimately “so bad it’s good” Longshot mode, Madden 18 is a surprisingly nice edition to the ongoing NFL football franchise.

Madden 18 features a much more simplified list of modes and features than past versions, and that is a mixed bag. On one hand, the streamlined feel takes away a lot of the extras that clogged up menus, but missing modes like a true single player career mode removes what could be great gameplay experiences. What remains is a franchise mode, including online multiplayer franchises, the Madden Ultimate Team, and the new Longshot mode.

The game is now split into three styles: Arcade for casual and high octane action, Simulation which mimics as closely as possible the real life game, and Competitive which focuses on user plays and true skill over AI generated plays. This is a great way to open the game up to more players, and each one has its own charm. Simulation mode is by and far the best, but Competitive is the mode you’ll need to know best if you want to play online.

Madden 18 continues with the recent improvements on player collision and actions, and while not really perfect yet, this game has some of the most fluid tackles and reactions that I’ve ever seen in a sports title. The running game, the defensive play and special teams all seem to be very familiar and unchanged over the years, besides minor tweaks. The most impactful changes have come to the passing game, and they are excellent.

Passing allows for a ton of control with the way the pass is released, and also how the receiver will react to the ball. Gone are the days where a lob pass is intercepted 100% of the time while your receiver just stands still. Now you can control more of how the pass is thrown, and then immediately choose how the receiver makes the catch, be it possessive, aggressive, or with an eye on yards after the catch. It opens up the passing game so much, more than any other innovation I can remember, and makes for some truly exciting plays in the end zone. Big plus here.

All said, nothing more strikingly stuns and offends like the new Longshot mode. Longshot is a narrative, featuring Mahershala Ali of Luke Cage and Hidden Figures fame. Mahershala plays the father of Devin Wade, star quarterback and victim of severely powerful emotions. Devin and his best friend Colt Cruise are together all the way through high school, into college, and beyond, but all the while Devin can’t shake the emotional baggage of his past.

I don’t want to ruin anything for you, but suffice it to say every single sports movie cliche you can imagine crammed into about 5 hours of gameplay still doesn’t tell the full story of how hacky and stilted this thing is. There is a tough talking community mom type, the small but quick competitive loverboy type, and even a rough and tumble tomboy enlisted in the army makes an appearance. All of the interactions are forced and horrible, and when Dan Marino comes into play, the incredible cheese becomes so thick you think you may never “Wade” back out of it.

The mode is relatively fun for what it is. You press buttons as they appear on the screen to move the action forward, with challenges and special games to be played in between. As bad as the story is written, it isn’t acted half bad, and the animation style is one utilizing full motion capture so it looks very impressive. Finishing the mode also unlocks several items for Madden Ultimate Team and a whole string of challenges based on the Longshot storyline.

As for that Madden Ultimate Team mode, it is the same as it always has been, which is to say poor at best. The concept of card collection and team building works fantastically with other sports titles for the other major sports, but just absolutely falls short here in Madden. There is little to no way to differentiate your team from others, and the limitations placed on card usage makes the rewards worth much less than they should be.

I hate that cards require “contracts” for use, ensuring that eventually you’ll have to purchase more just to use the hard earned rewards you get from play. The mode is convoluted, confusing, and ripe with temptations to spend. The game mode does now have a special co-op mode where you and two other friends can work together on a team against other players, and that is something intriguing, though at this stage it still can’t be truly tested out.

All in all, these are additions to an imperfect game that still remains imperfect. Linemen are still far to prone to mistakes, and several glitches freeze players and other “assets” in place, mostly in the animated cutscenes between plays. Even worse, while doing a passing challenge in the Longshot mode, the game glitched and froze a button in place, forcing me to watch the rest of the challenge and fail due to the fact that I had no control.

This Madden has a decent soundtrack of menu songs, a hodge podge of popular tracks from today’s hot artists. The game does a fantastic job of laying itself out, from the menus, to a quick access depth chart available in franchise mode, down to the audibles and formation changes on each individual play.

Madden 18 is a very solid product, featuring the best passing mechanics I’ve ever seen in a football game. The game has come a long way improving the physics and collisions, and overall presents a great product on the field, despite a few glitches. Some of those glitches can cause fatal errors, and there is no more hilarious fatal error than the hacky Longshot interactive movie/football experience that I can imagine ever being in a football game. Overall, this is a really great Madden release with a few errors that need fixing.

Patrick Rost has been with Gaming Trend since 2013. At first focused on sports coverage, Patrick has gone on to cover a wide range of games and other products for the website. Outside of Gaming Trend, Patrick writes and records music, grinds perpetually in Elder Scrolls Online (PS4), and lives day to day with his two dogs, Bob and Stella.
Related Articles: Madden NFL 18
Share
Tweet
Share
Submit