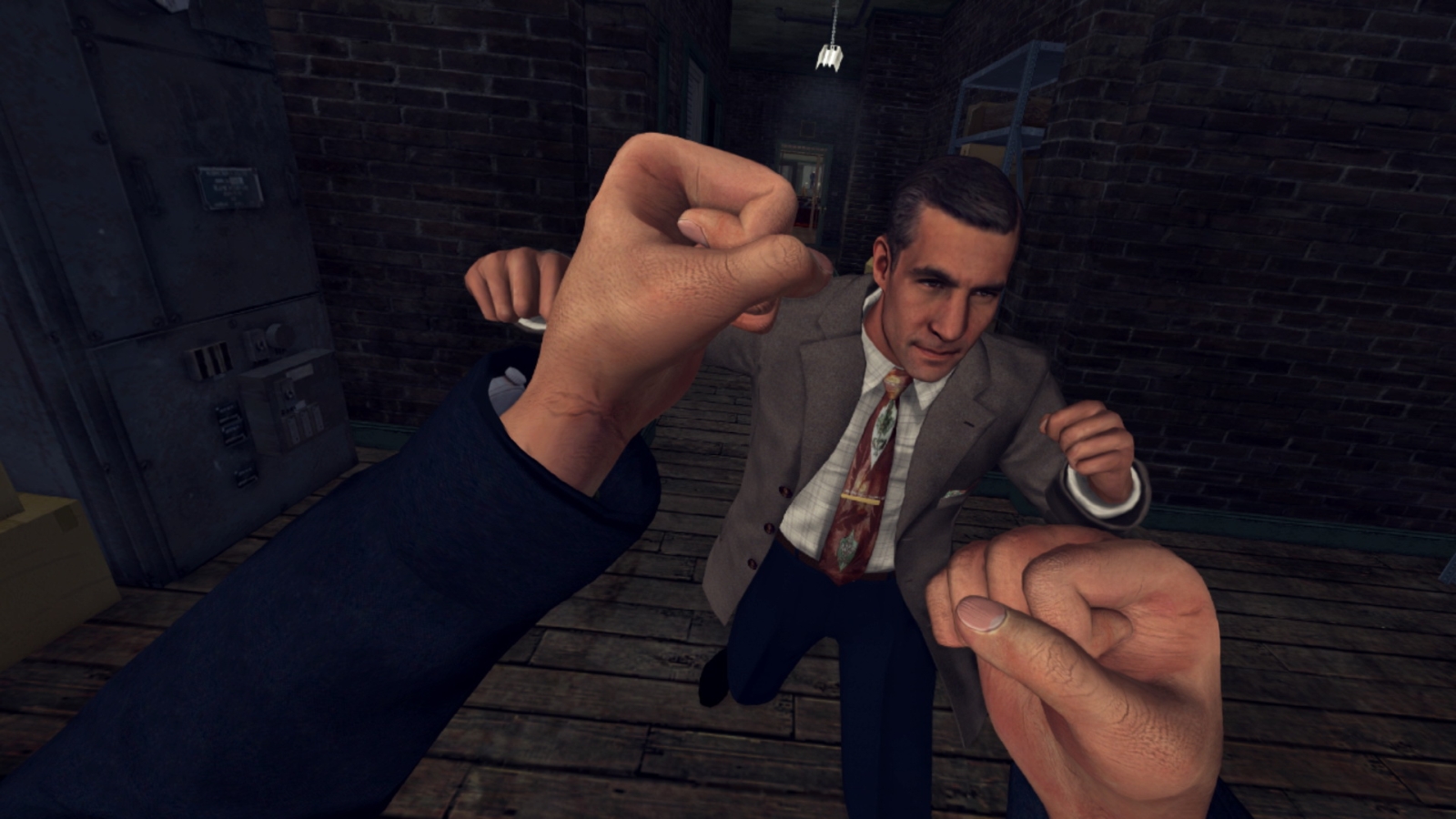 This perp just called me a racial slur, he’s getting worked up, and I’ve almost got him. He’s just committed a murder across town, fled from the cops, and suffered a beatdown at my hands as a punctuation mark for running. Now he’s in interrogation, and I’ve got him dead to rights. I give him the old “bad cop” routine, yell at him like a crazed mental patient, he lawyers up, and my boss yells at me to get back in there and “make some lunch”. I have no damned idea what that means, but it sums up the strange, racist, and wonderful world of L.A. Noire. I am Detective Cole Phelps, and it’s time to solve some virtual crime.

L.A. Noire The VR Case Files starts off with three tutorial missions that give you the tools and techniques to solve the four full case files afterwards. Unlike a lot of recent VR updates, L.A. Noire The VR Case Files (Let’s just called it L.A. Noire VR from now on, ok?) is built to take advantage of the more tactile nature of virtual reality. This means reaching out and pulling desk drawer handles, making a fist and knocking on doors, and leaning around corners to sling lead at criminals.

Gunplay is vastly improved by VR.

It’s in the quietest moments that L.A. Noire VR really shines. Once you get past the tutorial missions you’ll face four full-length investigations. That means heading to a crime scene, interviewing witnesses, poring through trash to find evidence, the occasional shootout, and real honest-to-goodness detective work. The hand holding that punctuates the first two hours of the game evaporates, swinging into some satisfying head-scratching goodness.

The missions included here are Upon Reflection, Armed and Dangerous, Buyer Beware, The Consul’s Car, The Silk Stocking Murder, Reefer Madness, and A Different Kind of War. If these missions sound familiar, it’s because they are. If you picked up the game on its initial release back in May of 2011, you’ve already played these missions. In my experience, it’s been long enough where I’d forgotten them, and it was like playing them for the first time. In all, it’ll take you about six hours to run through those full missions — just a small slice of the 20+ hours in the full game, but doing it in virtual reality makes for an entirely new experience.

A virtual slice is a good way to describe L.A. Noire, and that extends to how you get around virtual Los Angeles. In the full version of the game, there are a number of areas to drive to by the end of the game, bringing the world to life. Here, the same driving game exists, but there’s a lot less exploration needed. Hopping in the car, you’ll turn the key, set a destination using your trusty notebook, grip the wheel, and drive the vehicle to your desired endpoint. In practice, I found it fun for a while as I navigated around the City of Angels, angering pedestrians as I crushed the hedgerows, smacked into cars, and generally drove like a lunatic. The novelty began to wear off once nausea set in, and I was happy to reach out and pull the “Warp” handle, zipping me to my destination with a quick loading screen.

With your feet on terra firma, there are three movement mechanisms to match whatever playstyle or tolerances you might have. The default is a simple “look and click” method that has you highlighting objects in the environment (they’ll glow with a yellow highlight), then depressing the trackpad on your right wand. At this point, the game will give you a third person perspective as Detective Phelps walks through the scene to the desired location. A second method is simpler, placing a reticle in your hud for selection. It’s very similar to the first mechanism, but with a tad more precision at the cost of a small immersion break. The third method is a “smooth locomotion” system that has you swinging your arms to move, approximating a walking motion. This shifts into high gear when chasing a perp as you shift into full on Usain Bolt mode, swinging your arms rapidly to track down a suspect. In practice I found the smooth motion a little disorienting, and a hell of a lot of fun, but when I needed reliable cover for firefights, the first two methods were the obvious choice.

The shadows here are phenomenal.

L.A. Noire’s investigations revolve around interacting with suspects, and then interpreting their reactions accurately. Simplified from the 2011 release, Rockstar has moved away from Truth, Doubt, and Lie, shifting to a more descriptive Good Cop, Bad Cop, and Accuse. Using a combination of clues found in the field, and the right type of pressure, you can get your suspects to give off some sort of reaction that will clue you in on how to press them to confession. Maybe it’s an obvious squint or looking away in a shifty way, or more subtle fidgiting. Like real detective work, it’s not always science as much as it is art, and all of it revolves around the incredible facial expression system the team brings to the table.

In 2011, the facial expression system was state of the art. In 2017, others have managed to meet, or in a few cases, exceed what team Rockstar delivered, but only on a 2D pancake screen. In virtual reality, L.A. Noire is second to none. Faces are the focal point of the game, so Rockstar spent the time making those as realistic as possible. Animations during fist fights, and just the general ‘walking around’ animations of bystanders and other detectives are as smooth as we’ve seen. Still, some of the environments are in need of a coat of paint, leaving the occasional blurry texture or flat low-poly facade from the original game. Still, you didn’t come to look at the backdrops, but to fight crime, so you can expect every perp, clue, and red herring piece of junk to be lovingly crafted to the highest possible detail. It explains why the minimum requirements are a GeForce 1070 at launch, with a few hiccups around using an AMD video card with an AMD processor. Coupled with a few twitchy physics here and there, it’s clear there are going to be some patches post-launch to make the game more accessible.

I did take L.A. Noire VR for a spin on a GeForce 980 TI, just a little short of the minimum requirements. I was happy to see that individual controls exist to adjust anti-aliasing and shadow depth (the shadows in this game are, hands down, the best I’ve seen in any VR game), making it more than playable, even under the minimum spec. On my 980M laptop, I found a bit of reprojection, but nothing that prevented me from playing and having a great time. Don’t be scared off by the system requirements.

I came away with only a handful of real complaints for L.A. Noire VR. To ensure people don’t go punching their walls in VR, the game has a very strict playspace. Messages about stepping back to the center of the ring are frequent, as are ‘fade to black’ moments when you’ve stepped out of bounds or crashed your car. I also got stuck behind the Rockstar Club login a few times, my single player game locked behind an arbitrary and frustrating gate with no timeout or workaround. These complaints are just a blip on the radar, though, and none of it is going to stand in the way of this amazing title.

L.A. Noire The VR Case Files represents the next step forward for VR. In a world filled with wave-based shooters, stationary puzzlers, and simplified interactions, L.A. Noire offers instead real-world interaction with real dialogue and head-scratching problems to solve. Easily one of the best demonstrations of the potential of VR, I just wish it had some more legs to it.

Ron Burke is the Editor in Chief for Gaming Trend. Currently living in Fort Worth, Texas, Ron is an old-school gamer who enjoys CRPGs, action/adventure, platformers, music games, and has recently gotten into tabletop gaming. Ron is also a fourth degree black belt, with a Master's rank in Matsumura Seito Shōrin-ryū, Moo Duk Kwan Tang Soo Do, Universal Tang Soo Do Alliance, and International Tang Soo Do Federation. He also holds ranks in several other styles in his search to be a well-rounded fighter. Ron has been married to Gaming Trend Editor, Laura Burke, for 21 years. They have three dogs - Pazuzu (Irish Terrier), Atë, and Calliope (both Australian Kelpie/Pit Bull mixes).
Related Articles: L.A. Noire The VR Case Files, VR
Share
Tweet
Share
Submit