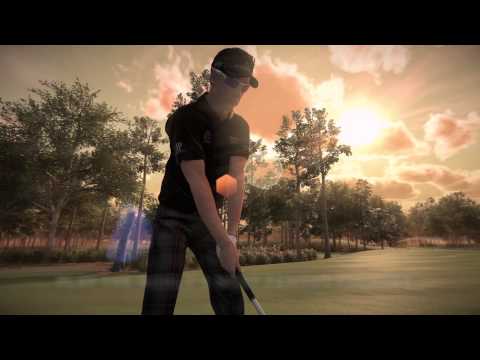 Sports games rarely take a hiatus that lasts longer than one year. The PGA Tour franchise has broken that mold, however, as they decided to forgo 2014 while they rebranded from Tiger Woods PGA Tour to Rory McIlroy’s PGA Tour. But with that two year break came the question of in what direction will this time off lead? The golf franchise produced a lot of buzz at E3 2014 when they revealed a trailer that showed a ship straight out of the Battlefield franchise crashing onto a golf course. This lead people to think, that this be a much more lighthearted entry into the series. As the release date approached, we began to see more of a focus on traditional sports features such as the career mode and the frequently maligned putting system.

To get things out of the way up front, that Battlefield stuff is far from an integral part of the game. There is a full, 18-hole course that is based off of some environments you see in Battlefield. There are many beachfronts, watchtowers, and bridges to knock your golf ball over. That popular ship from E3 2014 does make a brief appearance, as you once again see it crash onto a beach. From there, you effortlessly hit the ball over the ship and continue on with your life.

Playing this course in hopes of getting the best score is a bore, which means launching golf balls in the direction of flak guns is the more enjoyable scenario. Shooting a ball at one of these special inclusions (watchtowers, shacks, etc.) will result in an incredibly goofy destruction sequence, varying between comical and just plain ugly. Apart from that, you can also unlock a Battlefield character for play on whatever course you want.

You unlock the previously mentioned Battlefield character by completing the first course in the newest PGA Tour series, Night Club Challenge. Once you fire up this mode, it feels like the development team was not sure if they would go full eccentric with the newest installment or play close to the roots of golf. Night Club Challenge forces you to accomplish several different tasks, ranging from landing the ball within a targeted zone, all the way to using a power up to guide your golf ball through hoops that increase your multiplier, before eventually landing on a target and racking up points. While it is just a piece of side content, there is absolute barrage of challenges to take on.  There are three courses to go through, with a total of over 150 challenges.

Unfortunately, playing through these challenges is nothing to get excited about. EA Tiburon tries to spice up the experience by introducing power ups that will do things such as let you control the direction of your ball, give it an extra boost up in the air, or even force it to stick to whatever location it lands on first. These power ups are rolled out one after one after you complete challenges. They can be pretty fun to experiment with, but they never feel very useful once you get past the five challenges following its introduction. It feels like the mode is about being quick and bouncing from challenge to challenge, but that does not come through once you factor in load times. You can find yourself waiting upwards of fifteen or twenty seconds for each load time. Not to mention the flyover view of your objective is unskippable, and happens before every challenge. The biggest plague for the Night Club Challenge mode is that it feels just plain slow. Despite its chill, neon-filled vibe, Night Club Challenge is quite the disappointment.

As for the heart of Rory McIlroy’s PGA Tour, the on-course gameplay, things feel similar to previous iterations of the game, with intelligent upgrades being thrown out in some key areas. Before the game begins, you are forced to choose between three pre-set control schemes: Classic, Arcade, and Tour. These are just glorified names for easy, medium, and hard. Classic uses the three-click swing mechanic while arcade is what has been used for years. It focuses on using the right stick to swing, and then adjusting the spin of your ball by hammering X when the ball is mid-flight. It also allows the ability to view the entire course before taking your shot, and seeing a preview of where your ball will land. Tour brings about a more realistic approach, with accuracy being key. You no longer have the preview features open to you while using Arcade. Tour is a very tough challenge, and one only experienced PGA players will explore.

Driving the ball is similar to the previous games, as you can still launch a shot with extreme power and watch it fly over 300 yards. This go around, you get a nice shot arch that you can alter by moving the right stick. This will allow you to expertly navigate around trees and onto the green when it did not seem possible. Another change is that in previous games, you would be limited by invisible walls within each hole. Now, the entire course is open to you. So those horrid shots that would send your golf ball miles off course, which will now actually fly to another hole instead of just resulting in a two shot penalty. It is a small addition that does not become readily apparent, but it does make the experience feel more true to life.

The curved shot is very useful

The heart of any golf experience is how well you can putt. Compensating for hilly greens that will disrupt the line of your putt is what will determine if you get an Eagle or a Double Bogey. The putting system in PGA Tour has taken a lot of criticism, as they laid concept after concept over it in hopes of making it approachable, but also properly difficult. Those concepts have included a putt preview that shows you the path your ball will take to the hole, and even a circle on-screen that shows you where to aim your putt.

Those previous ideas have all been stripped in favor of a simple on-screen path that displays the break of your putt. If you are on a steep hill, you will see a heavy curve towards the highest point. This simplistic method of putting makes things much more simple, but it can take a good amount of time to get used to. For a while, you will find yourself struggling to read the breaks, and hitting the putt way off to the right or left. With time, that tendency starts to break as you learn to read each putting situation within a few seconds of your previewed path appearing. The only consistent issue is that figuring out how much or how little power to put into your hit is a recurring frustration. Despite that, this new putting system is the simplest, most effective solution to any golf games biggest problem.

Rory McIlroy’s PGA Tour brings about a new crew of announcers in Rich Lerner and Frank Nobilo. The duo has a strong presence in the world of golf, as you will find them commentating NBC’s tournament coverage, as well as some of the Golf Channel’s programs. Lerner and Nobilo do a fantastic job of giving the player an overview of each hole before tee off. They can also provide some insightful commentary on when to use certain clubs, based on whatever position you find yourself. That being said, the commentary becomes painful numerous times as they attempt to bring humor to bad shots. These pieces of humor focus on mocking the player, and will pop up even when you make a solid putt/drive. As time goes by, you frequently hear the same expressions over and over. While Lerner and Nobilo can provide pieces of insightful commentary, they mostly feel like repetitive fifth grade bullies.

Arguably the biggest part of any sports game is its Career Mode. Rory McIlroy’s PGA Tour allows you to create your own golfer and before setting foot on a course, you must choose between three backgrounds: Prodigy (played golf since a very young age), Collegiate (number one player in the world in college), or Instructor (teacher of golf that decided to become a PGA Tour player). These three backgrounds will not change your skills, but only help the commentary speak more specifically about you. From there, you must select your first attribute bonus. These bonuses act as your only customization of your attributes. So if you want to be a star at putting, you would select “Tap In,” which helps your accuracy on the green. Once you begin, you can only choose one bonus, but you earn another at level 25, 50, and 75. You level up rather quickly so picking up your second bonus happens within an hour or so. With each level you gain, a point will be applied to one of your skills. While some may take issue with the lack of control of each attribute, I found it much nicer to just focus on my game from hole to hole, as opposed to figuring out which skill would help me drive the ball a foot farther.

Throughout your career, you will play famous events like the US Open and the Arnold Palmer Invitational, all in hopes of being at the top of the FedEx Cup Standings at the end of the season. While in previous iterations, you had to play all eighteen holes of each day; you can now take advantage of a quick rounds feature that expedites the process tremendously. Quick rounds will choose what it deems the most important six holes of each round, and then simulate the rest based off your attributes. This simulation rarely results in anything more than a +1 or -1 difference. For the last day of each tournament, you will play the final nine holes so that you can make some major moves in your score. Many people do not have the free time required to play multiple full rounds of golf, this quick rounds addition helps tremendously. Of course, you can turn quick rounds off if you prefer to play every hole.

Rory McIlroy's PGA Tour will disappoint some, as it does not hit the levels of insanity teased during its E3 2014 trailer. But the improvements found within the gameplay mechanics help produce one of the best golfing experiences in years. The Night Club Challenge mode is a let down, as it showed quite a bit of potential. But that potential still exists, and could be reached in the future. While the extra year break did not produce the most revolutionary golf game around, it did help EA Tiburon create a solid experience that any fan of the sport will enjoy.