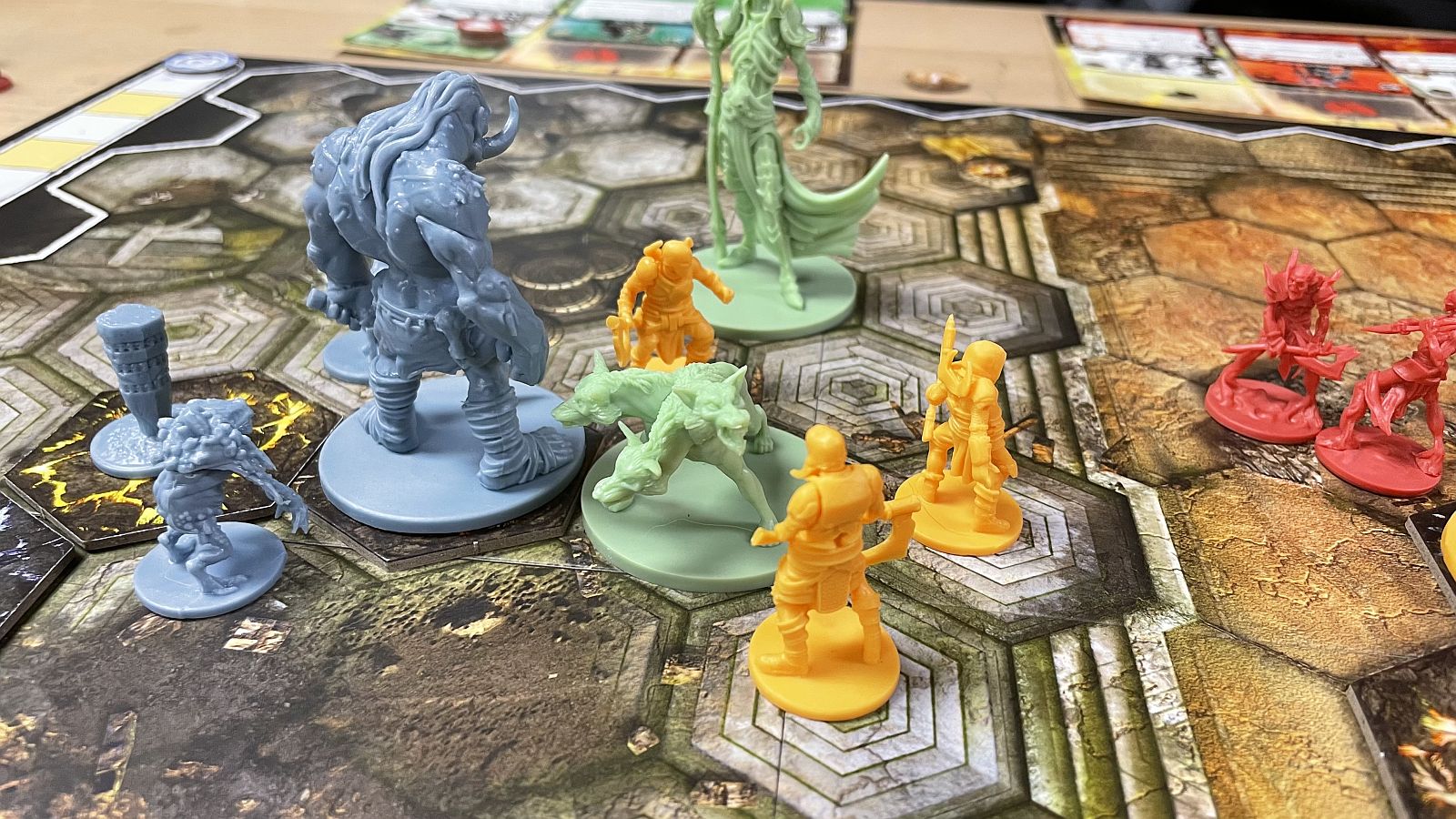 Here we go. Yet another skirmish board game. You’d have to be pretty crazy or pretty confident to wade into the tabletop skirmish board game genre. There are a ton of them and several that I, and the gamers of the world think are pretty darn good. So how does Godtear match up with the likes of X-Wing, or Unmatched, or Aresteia, or the latest hit Disney Sorcerers Arena? If you don’t have the time to read any further, I’ll tell you now… it’s pretty darn good.

I already mentioned just a small portion of the competition that Godtear faces and that’s because I find myself being more and more selective in my game choices lately. Storage space is at a premium, my money doesn’t go as far, and 10 billion games come out every year. So what is Godtear and why is it worth your time over another option?

So what is it?

Godtear is really two games in one. Like most head to head skirmish games the first part of the game happens before the real game even starts, building your team. If you’re playing casually with friends or just learning the game, it’s perfectly acceptable to spend hours ahead of time figuring out who you want to play with or just grabbing the coolest looking ones (there are dragons), but if you want a more competitive approach, the game starts with a draft.

Godtear characters have been designed with synergies and team play in mind so putting together the right characters to not only make your strategy succeed but also to counter your opponent is a huge part of the game before you even really start playing. I love this aspect of the game. Figuring out synergies and counters makes my brain spin in a good way and makes me feel like I’m really about to play a competitive game. While I love it, it’s also the first potential negative. This game requires investment. Big time. Sure, you could casually break it out once a year or with random people but to really get the most out of it you need to be committed to learning the characters and strategies and need an opponent that does the same. This is one of those games where an experienced player is going to crush someone brand new to the game.

It’s critical when building your team to have a mix of character types but with four types and only three to choose, you can never have it all. All of the characters have multiple abilities and a one time heroic ability and all of the minions have multiple of their own unique abilities. Oh, and during the game you’ll be flipping your character and minions cards back and forth and they all have different abilities on the front and back. It’s a heck of a lot to keep track of and make the most of during the game. Remember earlier when I talked about commitment? Godtear is definitely not a casual game. 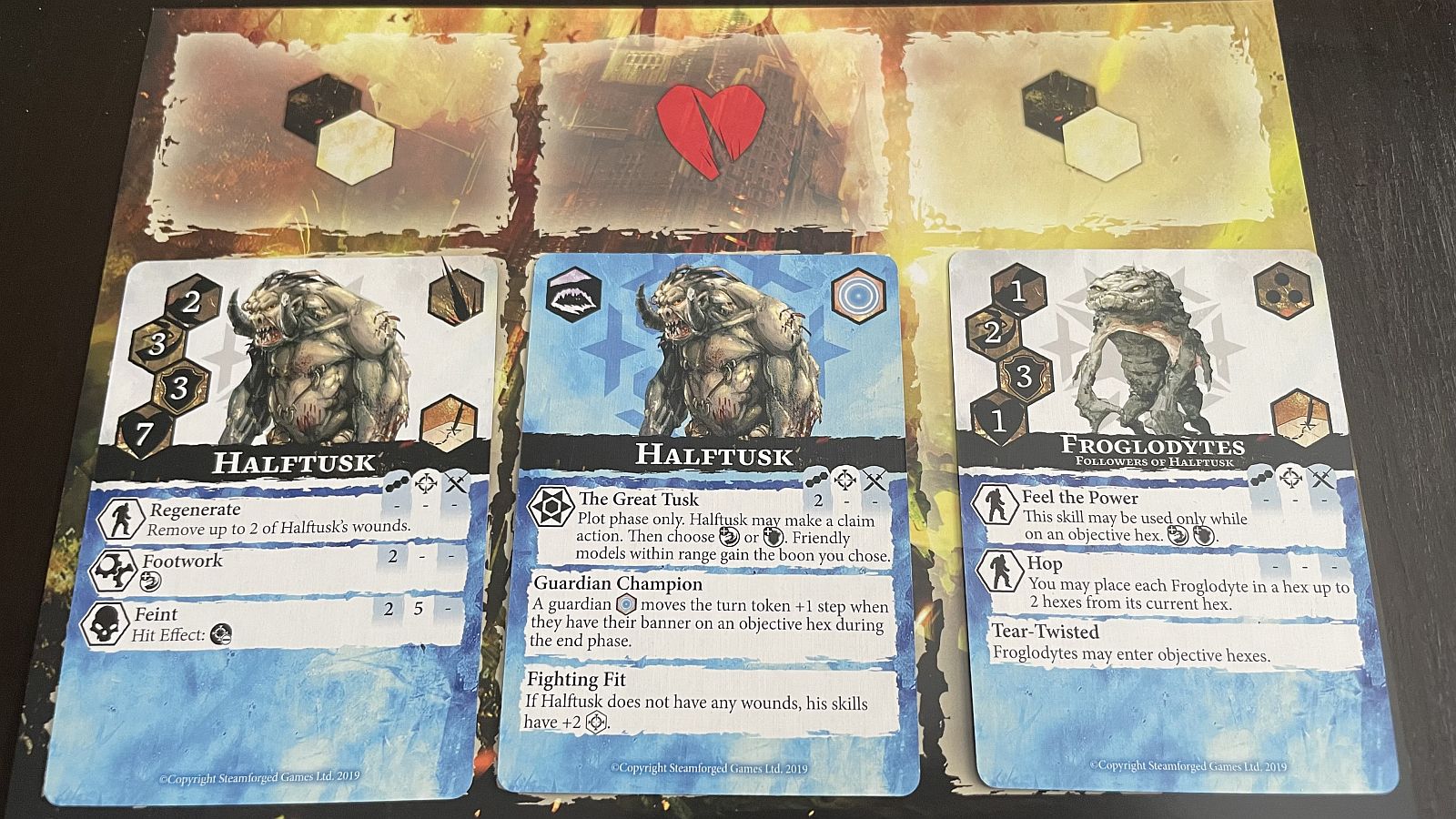 So you’ve drafted your team, now it’s time to set up the scenario. There are a variety of scenarios in the back of the book that are all designed to encourage dynamic gameplay and planning. The objective locations will grow, shrink, move around, and disappear depending on which one you choose. Not only does this add another wrinkle for you to deal with, it prevents the mid board pile up that a lot of skirmish games can turn into. Once you’ve set up one of the scenarios, you’re ready to play.

Gameplay is split into two phases. In the first phase each player will activate all of their units, trying to set up in the best position and get their totems out in the scoring areas. There are opportunities for some fighting but abilities in the first phase are primarily movement, repositioning, boons, and banes. The activation is all one team then all the other team. In the second phase, the carnage begins. Activations are now alternating between players until every character and minion has had a turn. Characters activate individually and minion groups activate together. Meaning if your character has 5 minions, all 5 get to go together but the actions you choose are shared amongst them. Characters and minions will die during a game but characters respawn the next round and minions can be re-summoned so it’s not a snowballing slugfest. Positioning and timing are everything. 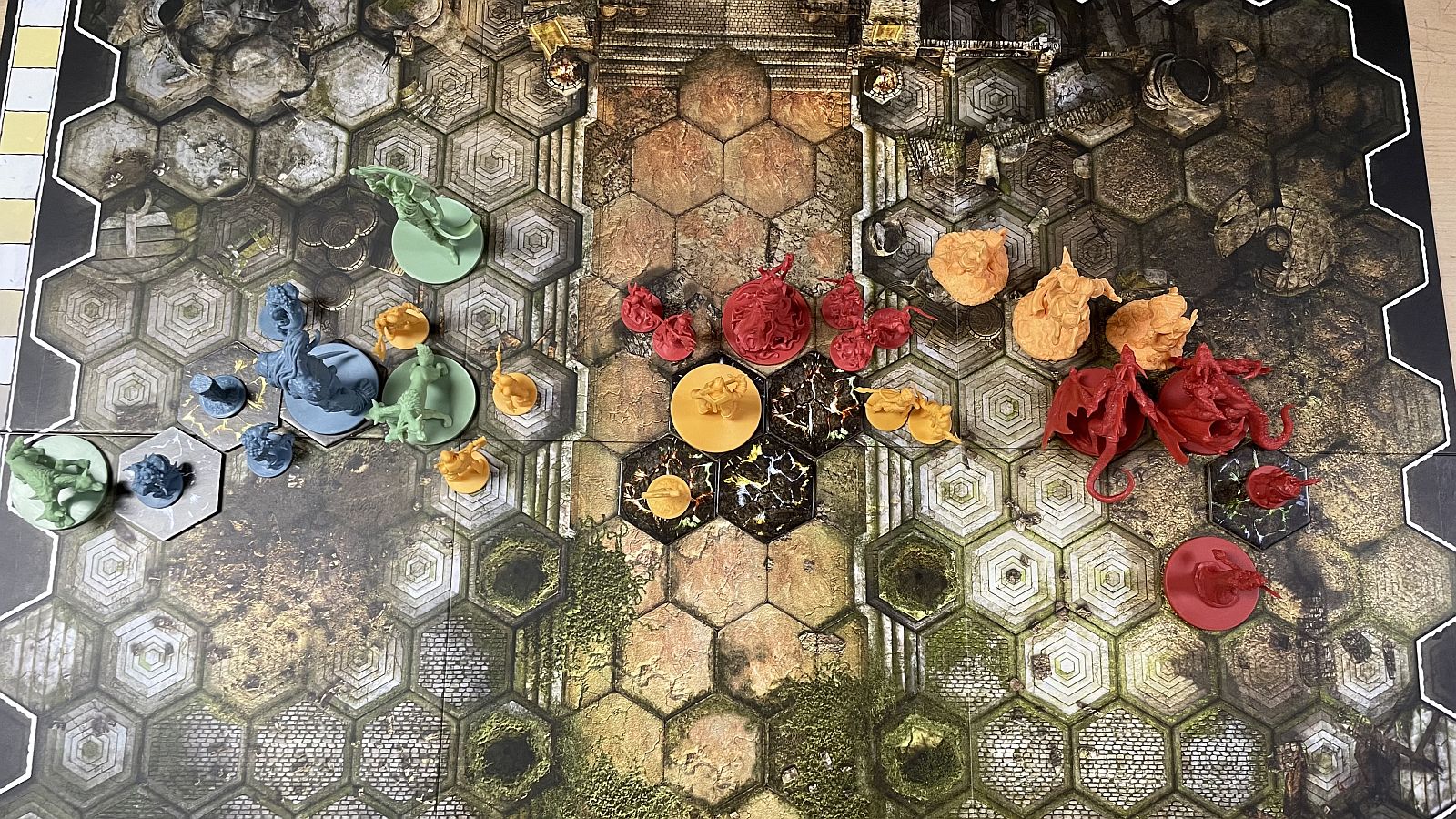 The reason timing matters so much is the clever scoring rules. The game is played over a potential five rounds with one team scoring each round. The clever part is that not all of the rounds are worth the same amount of points. Round one is only worth one point, with points increasing each round until round three then decreasing again. So charging ahead for early points but losing characters and putting yourself in a bad position for the next could cost you the game. You need to know when it’s most advantageous to strike and get the most reward.

Choosing which characters or minions to activate on your turn and which abilities to use is highly strategic. With so many unique abilities and combo potential it can be easy to agonize over making the right choice and when you finally think you have the perfect plan, you smack right into every tabletop gamers bane. The dice. With everything I’ve said so far about how strategic and complex Godtear is, it’s still a dice chucker. I can spout all the stuff you’ve heard before about probabilities evening out over the course of a game or minimizing luck through strategic choices, and those are valid points, but oh boy can you still be screwed by the dice.

Every interaction in Godtear is an opposed dice roll so you’ll be rolling a lot and it can be frustrating when your perfect attack is spoiled by a lousy dice roll, especially if you feel like it’s just not going your way all game. Personally, I don’t mind this. I like chucking dice and sometimes it works out and sometimes you just get crushed. I bring it up because if you’re one of those dice haters, and I know there are a lot of you, you won’t like this game. The strategies and gameplay are deep enough that a couple of bad rolls shouldn’t be ruining your game but dice haters be hating.

The production of Godtear is top notch. The character sculpts are beautiful and a nice chunky heroic scale that looks amazing on the board. Every model comes color coded to its type which I find helpful, but they would also paint up beautifully if you’re a painter. The cards are normal cards, not overly luxurious but they don’t feel bad either. You get a load of tokens in the box that are clear and punch out easily. The boards are the weakest part. There is nothing wrong with their quality but the graphics are completely irrelevant to the game. I wish the map was more integral to the gameplay, so room for improvement there. There are currently two starter sets to test the waters and they are split between the color types, red and green as well as blue and yellow. If you grab a starter and like the feel, you’ll need the other starter or some individual character expansion to put together a full team. 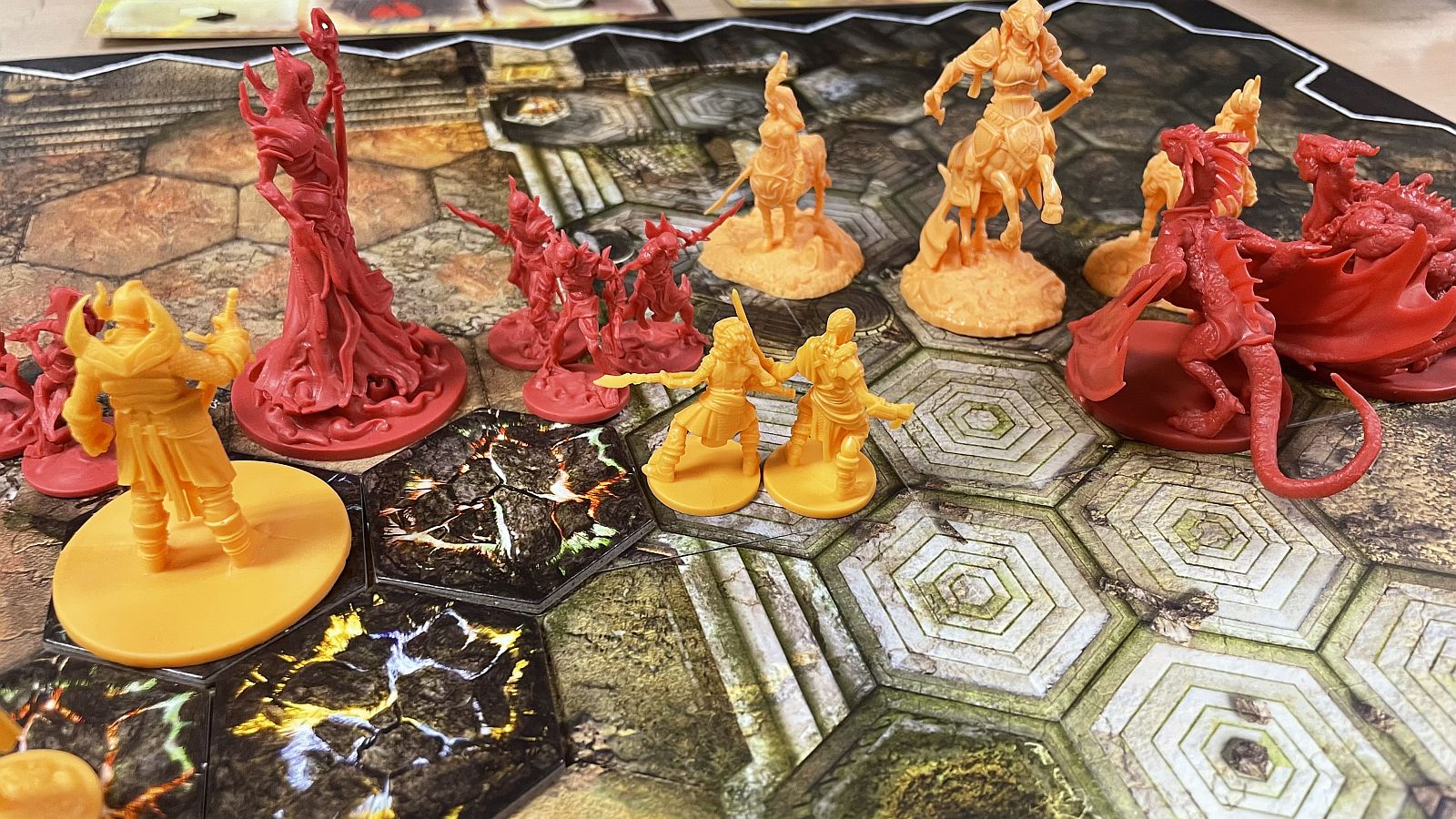 Godtear is a winner. It combines the ease and accessibility of a board game but throws in complex decision spaces and great looking models. While a lot of skirmish games seem to devolve into a slugfest in the middle of the board, Godtear’s scenario design and character interactions keep the gameplay dynamic and interesting while the five round game time keeps it from dragging on for hours. If you want to really invest in mastering a game and have some friends to do it with, Godtear is a fantastic choice.

Godtear is complex battle that tests your ability to create big plays and rewards those willing to really invest in learning its systems and characters.