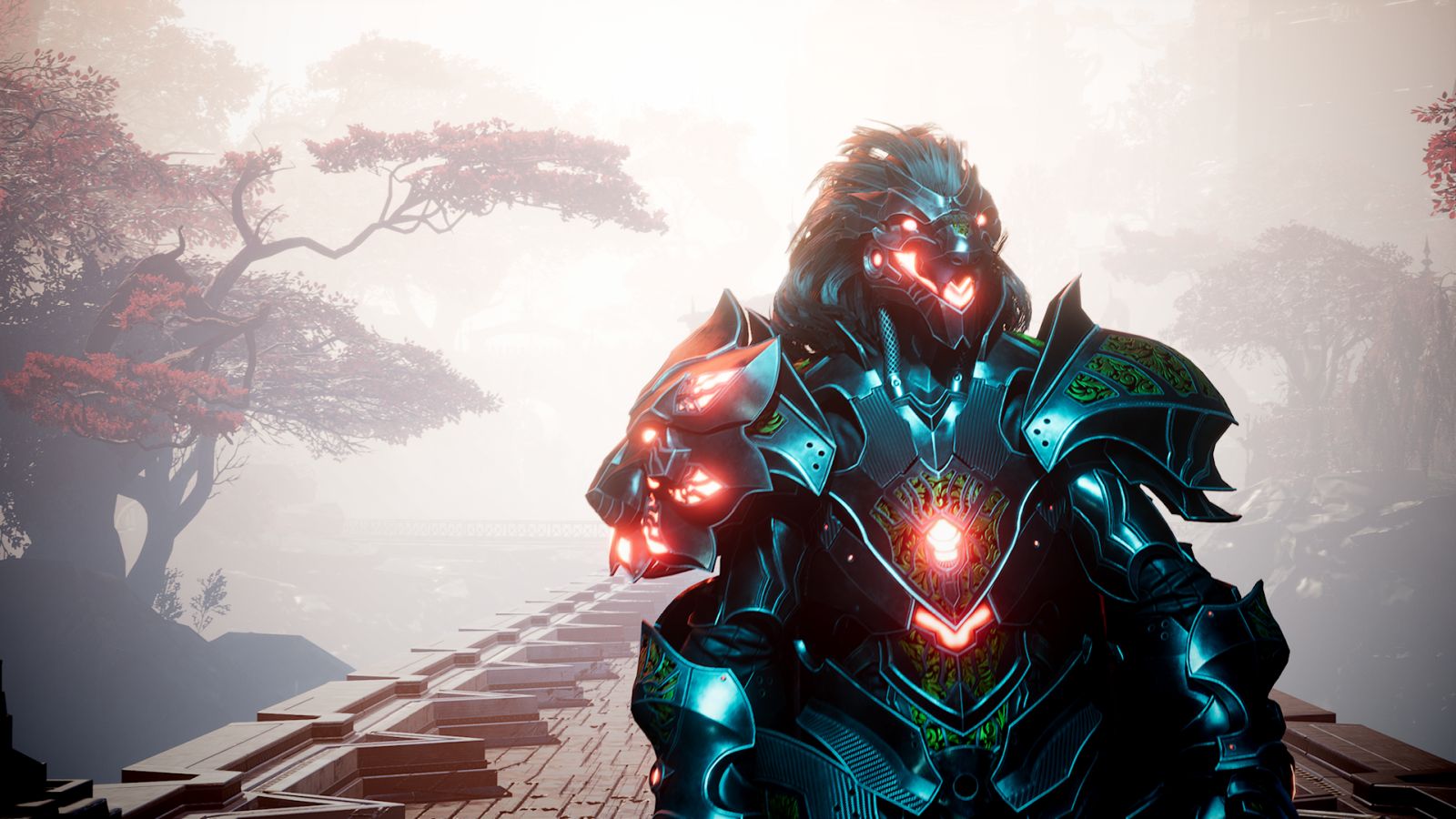 When Godfall first released for the PlayStation 5 back in 2020, it was met with a mix of reviews — most of them unfortunately very negative. Many of the comments I read or heard from people were that the gameplay just wasn’t fun and the story was very lacking or incomplete. I, unfortunately, was not able to play the original PlayStation 5 version of this game, but I have been given the opportunity to check it out for the Xbox Series X. So while I won’t be able to comment a whole lot on how improved the game is, I can at least speak on my own experience with the game and maybe I can even convince you to give Godfall a second chance.

If you haven’t yet, I do recommend you check out our original review, which you can find here, where you’ll find a more in-depth synopsis. One of the things that stood out to me when I read through it was the difference in the story. Now, I don’t know if this is actually something that was changed at all, or maybe it’s just how it was originally worded that didn’t specify, but Macros is actually your, Orin’s, brother. He defeats you in an epic godly battle and literally kicks you off a high ledge, assumingly to your death. However, you survive the fall and start your preparations to overthrow him and thwart his efforts to truly become a god. You will have to defeat a number of bosses along the way, each with their own unique attacks and abilities that you’ll have to overcome, but in doing so you’ll be given amazing gear and materials needed to get the upgrades necessary to defeat Macros. 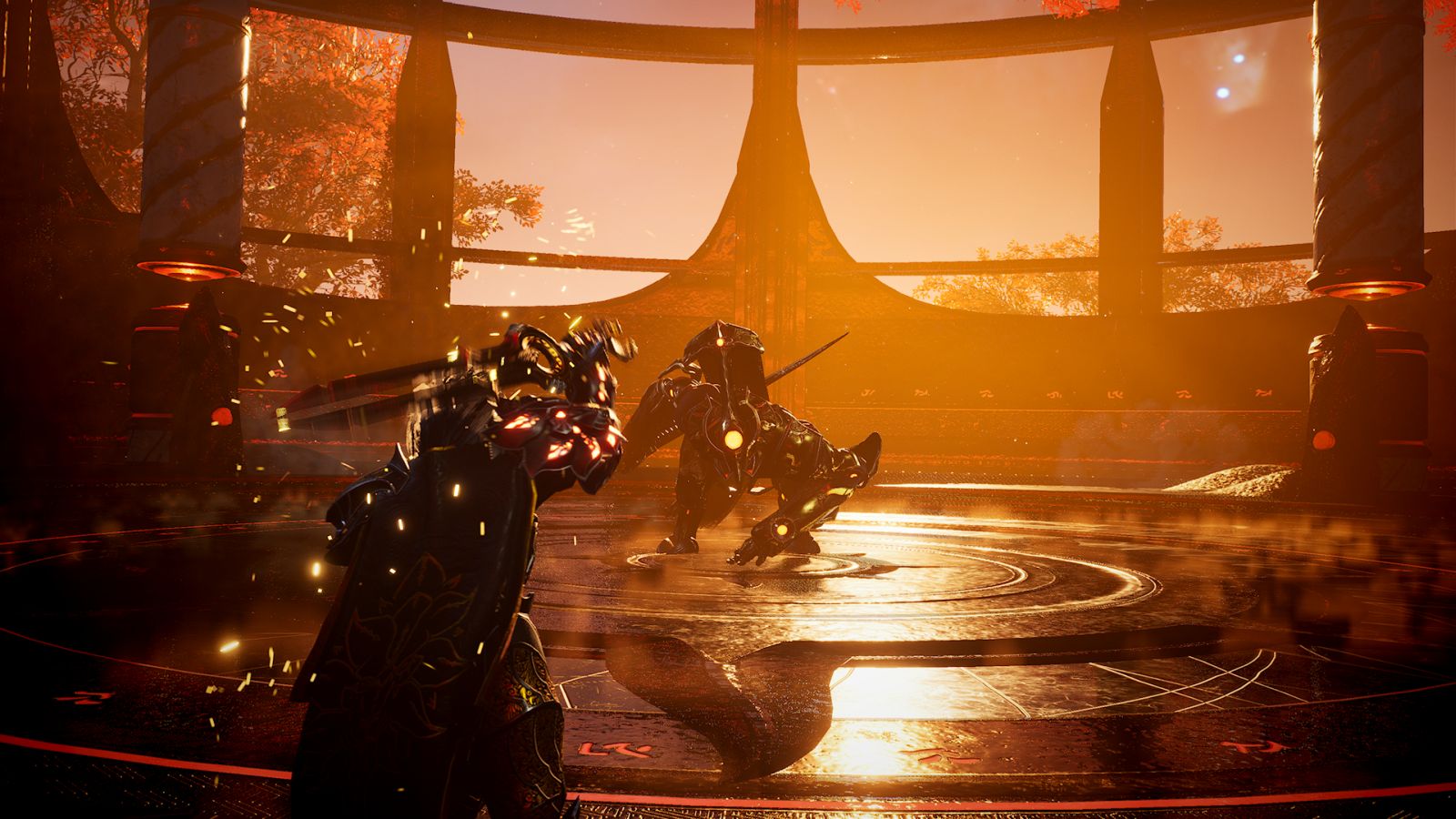 The game itself isn’t overly complicated or drawn out, which I do appreciate. Lately, it seems like a lot of large open-world games are filled to the brim with a ton of side content that, in my opinion, only serves to distract me from my main objective. I like that Godfall stays really focused, not really having a whole lot of side content that sends me off on a 3-hour long side quest that might get me something I end up using but usually just ends in me getting some other subpar piece of equipment that I just end up using for scraps. However, I do also have to comment on the lack of depth. I feel like not much detail is being given, most dialog sequences being very brief and straight to the point. It would be nice if there were more interactions, especially in the field other than hearing the disembodied voice of the Seventh Sanctum (especially every time I die, thanks for the reminder of how weak I am). Overall, I do find the story to be an interesting one, who doesn’t love a good betrayal?

Probably my favorite thing about Godfall is how powerful I feel in combat. They kept the mechanics simple; no fancy or tedious combinations to have to try to memorize (though there are some simple button combinations for special attacks). You get to choose from a variety of melee weapons like greatswords, dual swords, and polearms, each having different special attacks and even weapon perks, like fire, that can cause a burning status effect. Each successful strike on an enemy adds a little more to a gauge that when full allows you to unleash a devastating attack that deals more damage than the usual and can even knock an opponent to the ground, allowing you to run up and perform a critical final blow. You also have a shield equipped which you can throw Captain America-style to knock an enemy to the ground, which is just incredibly satisfying to do. I even have a greatsword I can throw once the gauge is filled. So much fun.

The gameplay to me feels like a 3D dungeon-crawling, hack-and-slash game, kind of like playing Dungeon Hunter 5 on my phone a few years back. One of my favorite things that I find so much satisfaction doing is just running around destroying stuff with a swing of my sword. Granted it’s not all for nothing. You do find some useful stuff by smashing things like little health replenishments and shop currency (which we will touch on a little bit later). Smashing things also helps to fill up another special gauge you have for the special skill linked to your valorplate, which is basically your armor set. This part does get a little confusing because regardless of which valorplate you use, the skill is still called Archon Fury. However, what that skill does is different based off which valorplate you are using at the time. For example, the Silvermane valorplate, which is a personal favorite, summons a few ghost-life warriors who will fight alongside you for a short period of time. Each valorplate also comes with it’s own set of bonuses and perks, so its good to go through them and see which one strikes your fancy. 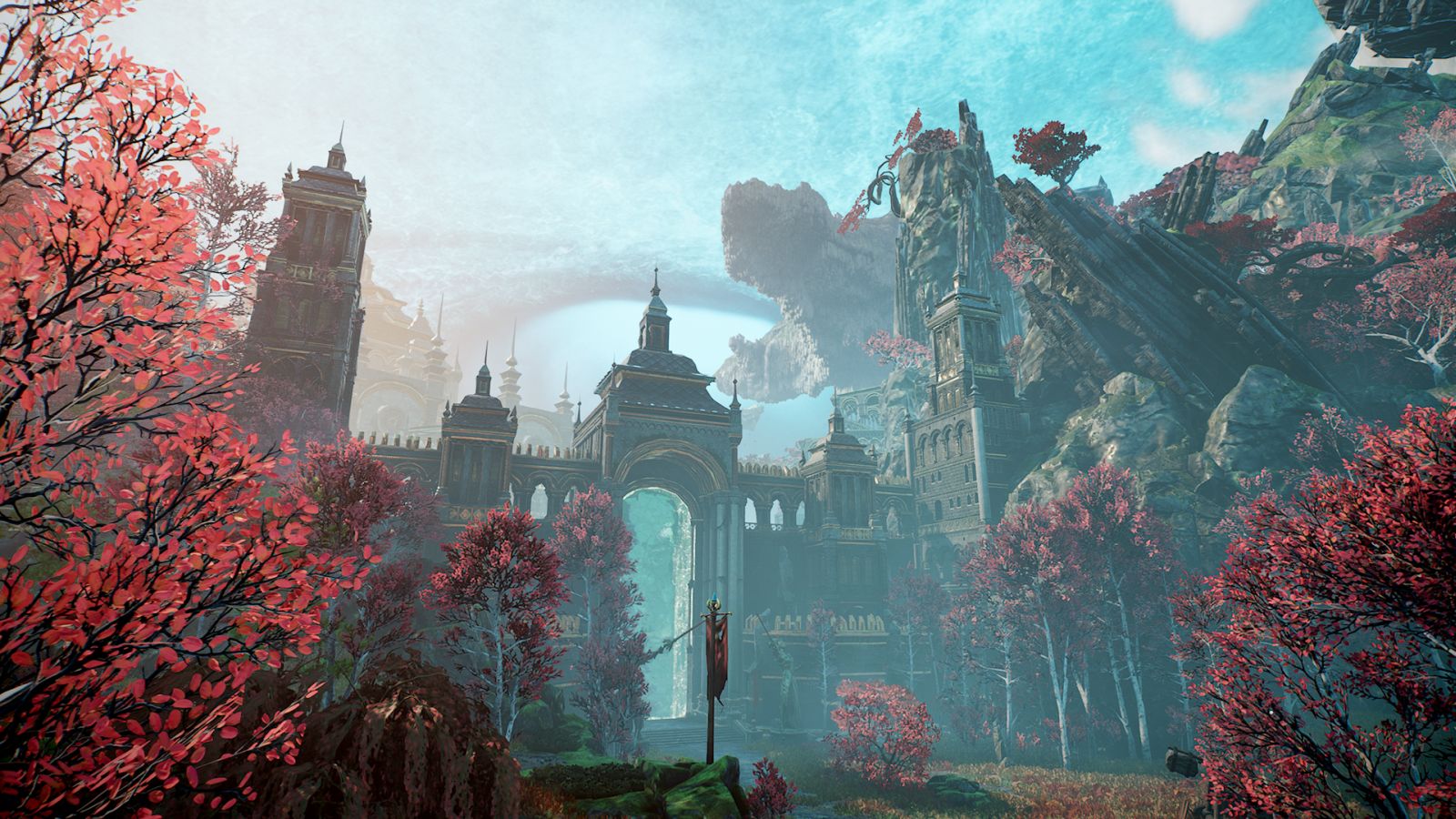 Godfall has to be one of the most stunning games I have ever played. Sure, there are games like Horizon Forbidden West and Ghost of Tsushima out there, but the grandeur and overall level of detail in Godfall is truly breathtaking. I wish this game had photo mode. However, if it did I would likely spend an eternity just snapping pictures everywhere I go. The colors are so vibrant, the textures so detailed that no polygons were spared. They used every ounce of graphical horsepower they could possibly leverage. All of the different areas are somewhat interconnected without having to wait for loading screens and the world is easily traversed on foot. One thing I found interesting is that when you are sprinting, if you don’t move around your left thumbstick too much you get a sprint boost, making you run faster. It’s nothing overly groundbreaking, but I just thought it was a nice touch. Another fun way to get around, particularly when needing to get to a higher place or even to an outcrop sticking up just out of reach are these beacons that you can sort of jump to. The animation of doing one of these jumps is really cool to watch, so much that I do it just for fun because… reasons.

Something I have particularly enjoyed while exploring is finding hidden chests and completing little mini challenges. Between missions you can freely explore Aperion to grind out levels, find more loot, and gather materials needed for upgrades. Completing little objectives around the map can lead to higher rarity rewards, including better weapons, amulets, banners, etc., that can give you an edge in the next big fight. If you are also a fan of lore in games, you’ll even be able to find a collection of codex pages that give you a little backstory as well as a small dive into the minds of Macros and Orin. I’ve collected quite a few of these myself, however, I haven’t actually gone back to read any of them. Shame, I know. I just like to collect things. Some of the chests around the map aren’t all that simple. You might have to defeat a few waves of enemies before it’ll open, or maybe it’s locked by these beacon/totem things that you have to destroy first. These usually yield better rewards than normal chests and are well worth the extra effort.

I feel like Godfall is a game of simple affairs, another example being the skill system. Again, they kept it simple, having only a single tree (if that’s what you would call it) of skills that all seem to serve a viable purpose. Sometimes when looking at skill trees you see skills that you just automatically skip over because it’s not something you know you’ll even use, which is great in that you get to really play your way, but I feel like every skill in Godfall will serve some purpose that everyone can benefit from. Each skill is also able to be leveled up to level 5 to grant additional bonuses. The loot system is also quite simple, using the tried-and-true common to legendary ranking system used by every RPG-style game ever, though it doesn’t just stop at the classification of the item as you can also upgrade all your weapons and gear for more defense, increased attack, and more. 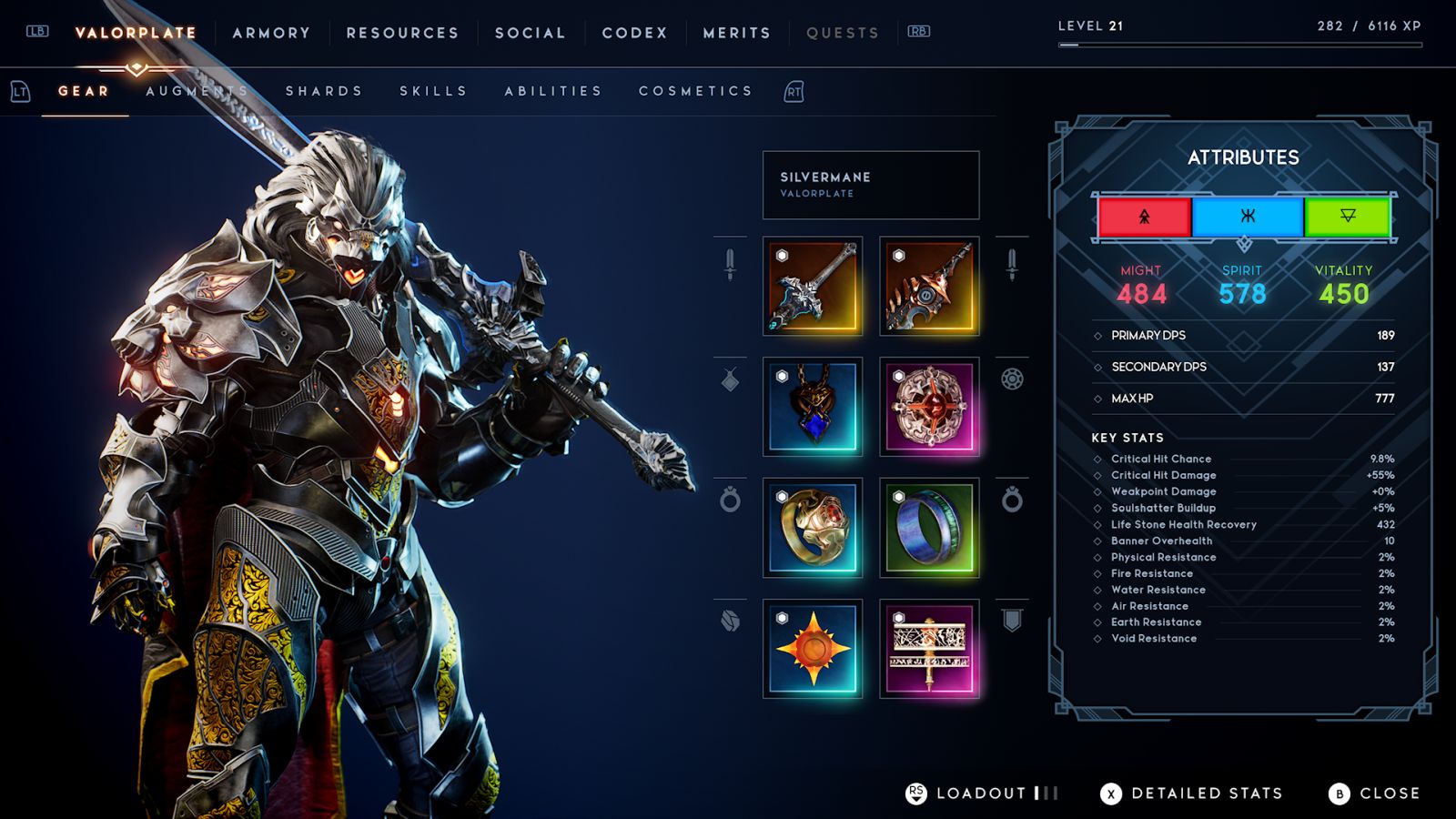 One thing I did find that I have yet to actually find useful is that once you rescue the Godsmith he basically opens up a shop for you. However, I have yet to see anything of real value in this shop. Often enough I find much better gear while out exploring and fighting enemies and I can simply upgrade what I already have. I guess if anything I could just buy the items from the shop to use for salvage, but I don’t know that that would really be beneficial at all either. Aside from that, he does also unlock a forge where you are able to further upgrade your gear. After you get your upgrades and level up your skills you can head up to a training room to familiarize yourself with your newfound power so that way you aren’t fumbling with the controls when it matters most.

If you were on the fence before about Godfall, I feel like you should give the game a second chance. It seems to be typical nowadays for games to release with a laundry list of problems, but I’ve not really experienced anything game-breaking in all my time with Godfall. There are the occasional complications and (possible) glitches (I can’t tell if one of the issues I’m having is a glitch or just a mechanic) but nothing so far has stopped me from continuing to play the game. The only gripe that I truly have is that being 5 levels higher than the recommendation for taking on a boss just doesn’t seem to be enough so I am spending a lot of time just trying to grind out levels in order to simply progress to the next challenge, which I always find to be just plain exhausting and tedious in any game. I know it’s not meant to be a walk in the park necessarily, however when I have to spend literal hours just trying to best a single boss, early in the game I might add, it can become a bit discouraging. However, one thing to remember is that the game can still be played co-op, so if you are having an issue beating a boss, just phone a friend.

Godfall is a godlike load of fun to play. I am a firm believer in giving games a second chance and this one is no exception. Gameplay is smooth and uncomplicated, as is really the rest of it, making it easier to get into, and it’s oh-so-satisfying.

Cassie Peterson is an Editor for Gaming Trend but also a sporadic content creator and exceedingly average Rainbow Six Siege player. She goes by MzPanik on Twitter and Twitch and all of the gaming platforms.
Related Articles: Godfall
Share
Tweet
Share
Submit