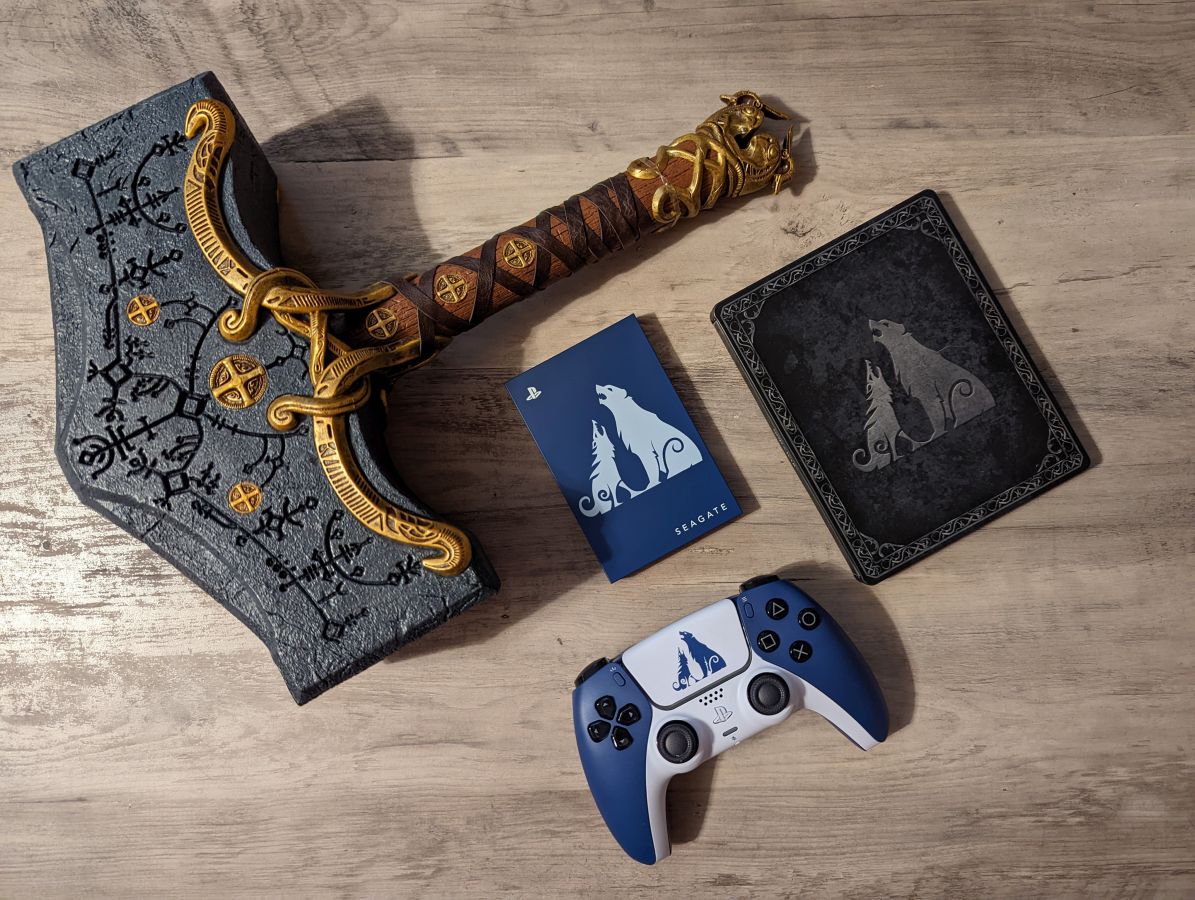 Yep, me again, here to tell you to just go get a Seagate hard drive for all of your storage needs. I could stop the review right there honestly, because these things just don’t miss. We’ve been talking about them for a long time, and they are the model of consistency. That being said, you have to specifically talk about the item before you, and by Zues, the God of War Ragnarok hard drive is here. Let’s take a look under the hood. Or don’t, that could ruin it.

As per usual, you’ve got the 2TB hard drive, a high speed 3.0 USB cable, paperwork, and a sticker sheet. I’ve got to call out the sticker sheet in this one, which I hadn’t done in the three I’ve reviewed, because there are some epic Norse designs they’ve included I will definitely put to use. It’s all as plug and play as it always is, connect your USB cable, plug it into the computer, and boom, you have 2TB to use. 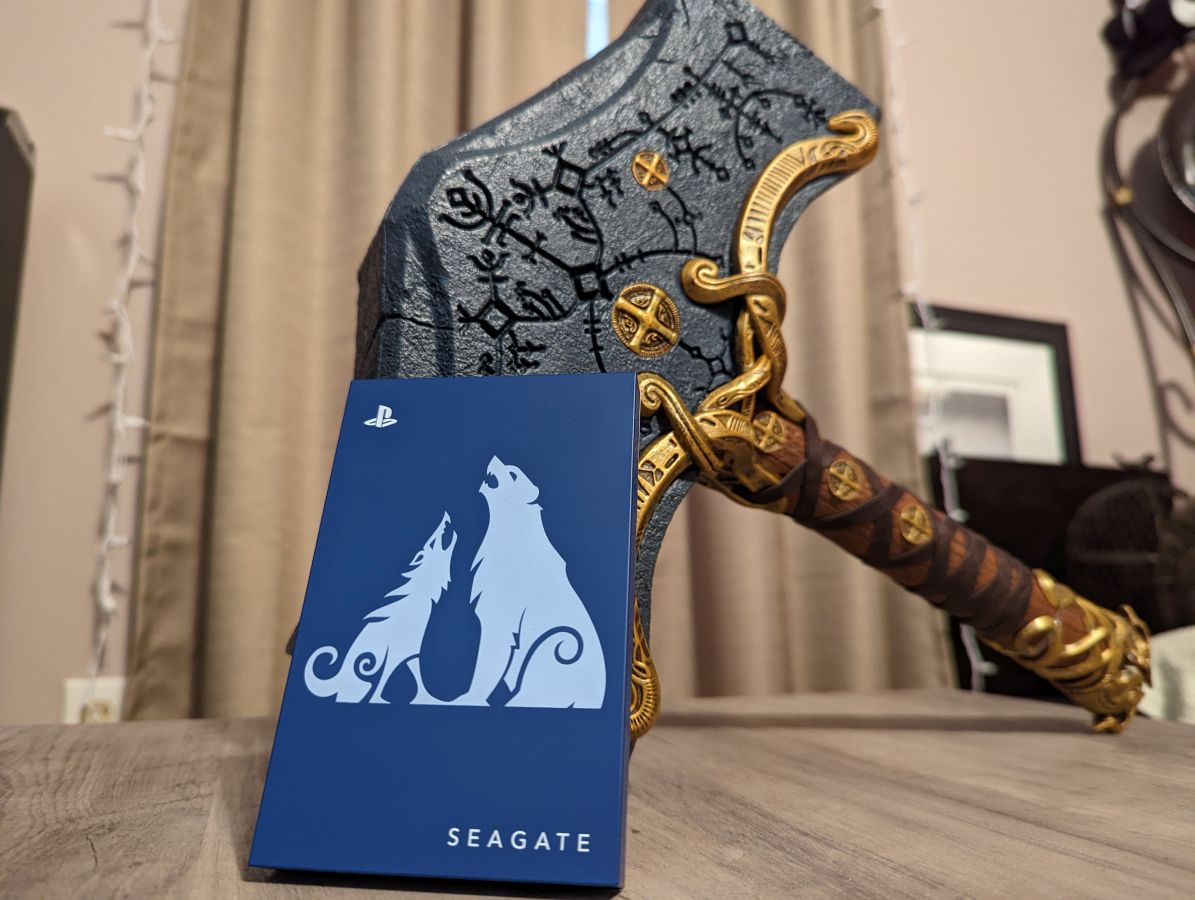 One of my issues almost always lies with the cable being the odd proprietary one for hard drives (can we move into a USB-C future please people?), and that doesn’t change here. What does change is the cable’s design itself. I understand going for the white aesthetic, but it’s a regular plastic rather than the nice braided ones in previous models. Because of that, it feels like it’ll be even easier to lose track of in the midst of my Fimbulwinter of cables. Not to mention, it just looks cheap next to the premium build of the hard drive.

As for the hard drive itself, I just love the design. It’s the sleek and compact hard drive you know and love, easy to slip into your pocket. The deep purple color matches the God of War Ragnarok controller as well, meaning it’s perfectly on brand with Sony’s design too. The logo adorning the top is beautiful, the Bear and Wolf representing our heroes, with a Norse border above the LED light and on the sides. All of it is textured too, giving it a nice feel when you run your fingers over it. The game’s title logo on the back completes the ensemble, making for a gorgeous hard drive all around that even Odin would enjoy.

The LED light on the previous drives has been customizable RGB, so I was a bit surprised that function was missing from this one. I get the blue is on point for the game, advertised as “perma-frosted”, but I’d have preferred the option to choose for myself. After all the trouble I went through getting Razer’s Synapse 3.0 software working on with the previous drives, it just feels like a missed opportunity. 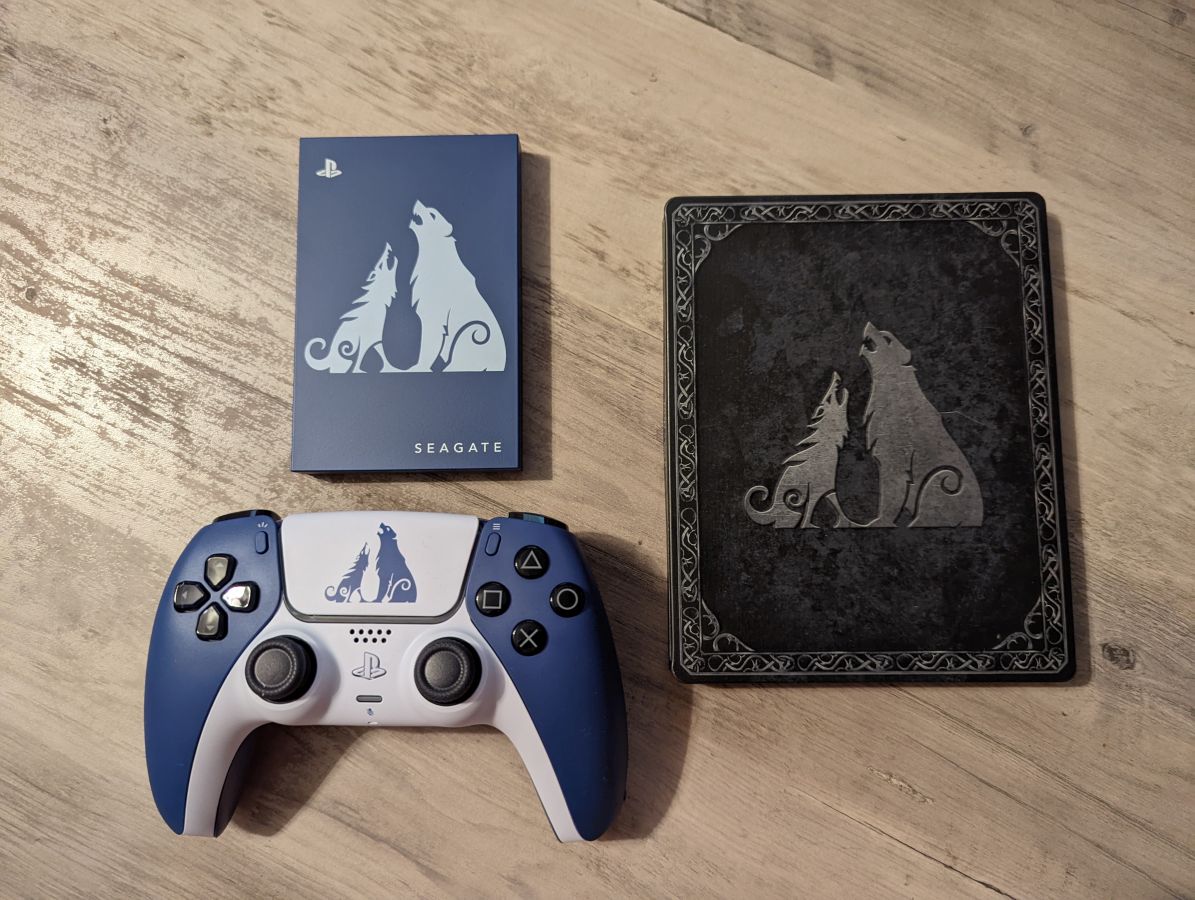 Versatility is always the name of the game, and the God of War Ragnarok hard drive is as versatile as the new shields you can use in the game (no spoilers I promise!). It can’t be used to play your PlayStation 5 or Xbox Series games, but it can be used for cold storage (a product of Fimbulwinter no doubt). You can still use it to play PS4 or Xbox One titles though, meaning God of War 3 Remastered, God of War 2018, and the PS4 version of Ragnarok are certainly on the table. It’s also fully PC compatible, and the Steam Deck even recognizes it via my USB hub! There’s a long process on how you’d have to use workarounds to get it recognized for running games on your Steam Deck, but just the fact that the Steam Deck knows it’s there is a win in my book.

After running the usual tests via ATTO Disk Benchmark and Crystalmark, I found results we are pretty used to seeing. Seagate’s game drives do exactly what they should, what we need them to do, and in some instances even punch above their weight. Reminds you of a certain demi-god whose name starts with a K, no? I have the pictures below of all the wonderful numbers, and if that seems great, know that I had it running through a USB hub as well, meaning it’s still kicking butt even with an extra variable. Having data on your hard drive may slow down the speeds a little bit, but it still does great despite the additional stuff thrown at it. 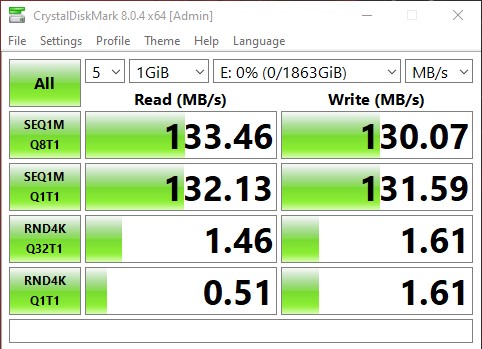 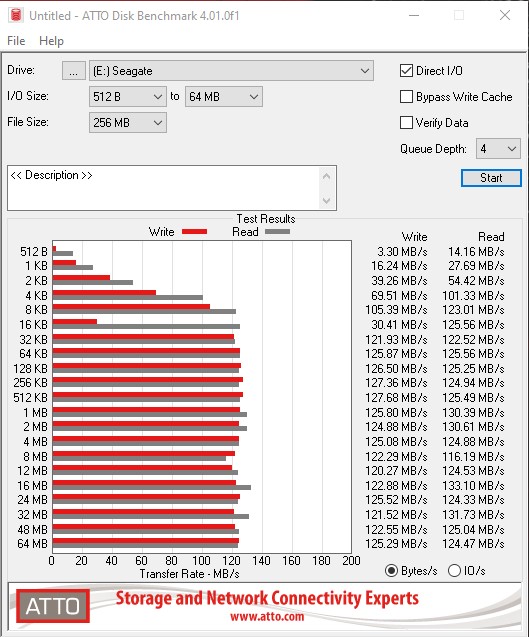 Of course, with trying out Marvel’s Spider-Man Remastered on the Spider-Man Seagate hard drive, it only felt right to play God of War 2018 on PC using the Ragnarok hard drive. The only hiccup I’ve noticed is it takes a while to allocate disk space before it starts trying to install a game. It took about ten to twelve minutes just to get that finished before it started downloading, where my internal drives handle that immediately. Could be nothing being present, but it’s something to remember if you have limited time but want to use your drive to play something via PC.

When playing God of War 2018 on PC, everything was incredibly smooth. You wouldn’t really know you were playing on an external hard drive at all. The game loads nearly instantaneously when starting a new game, and when dying I waited all of about five seconds to reload at the checkpoint. Sure, I’ve got a high end rig, but it all has a bottleneck to load from, and it’s almost imperceptible. The textures also don’t seem to have trouble loading from the drive either, with everything looking nice and clean. I ran everything on Ultra as well, so I know it wasn’t just the settings giving this game drive a break.

Every demi-god needs his weapon, and you need a Seagate hard drive. They’re wonderfully consistent, and the awesomely crafted artwork just endears them to you even more. The God of War Ragnarok one might not be the best one they’ve dropped given the ugly USB cable and lack of RGB, but the performance is still up there with every other one. It seems like it would take Ragnarok itself to stop the might of a Seagate drive.

David Burdette is a gamer/writer/content creator from TN and Lead Editor for Gaming Trend. He loves Playstation, Star Wars, Marvel, and many other fandoms. He also plays way too much Call Of Duty. You can chat with him on Twitter @SplitEnd89.
Related Articles: God of War Ragnarök Limited Edition Game Drive
Share
Tweet
Share
Submit