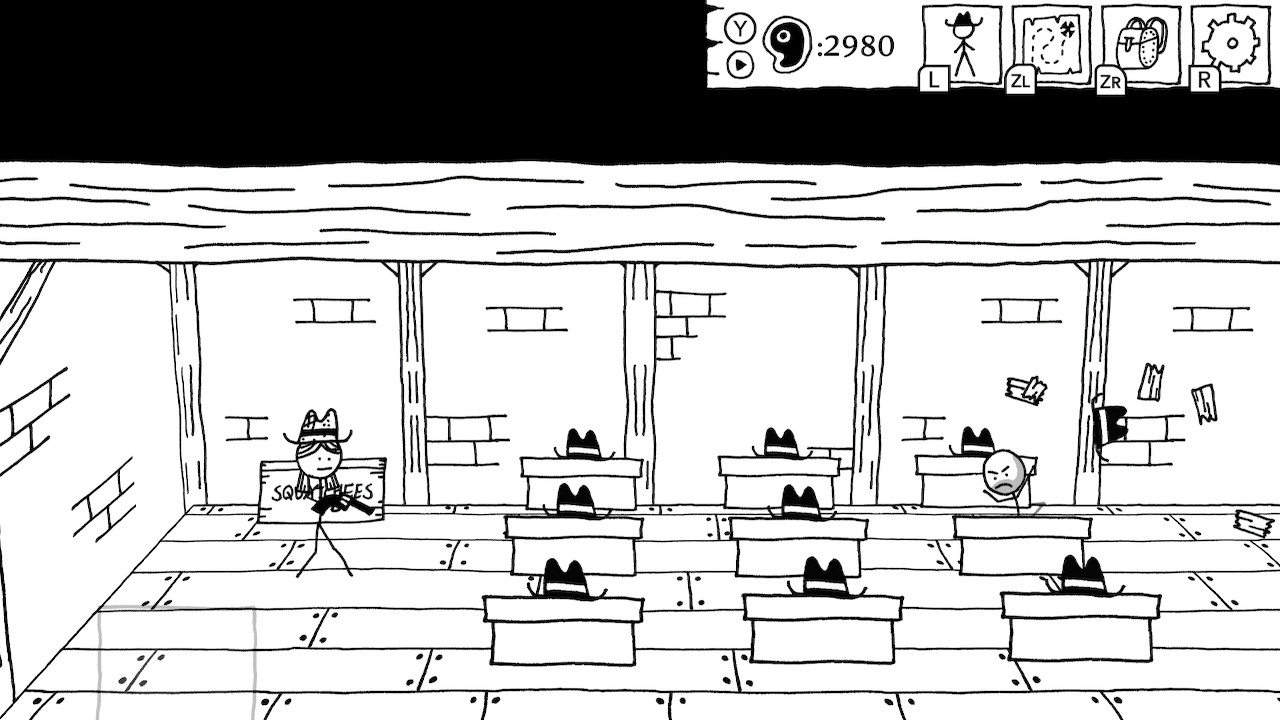 In the age of near-realistic graphics, we’ve learned an important lesson: a game doesn’t need a beautiful artstyle to make a good game, it needs a fitting one. If your game is a heavy action game with themes of death and dread, a darker artstyle will fit. If you If you are trying to create a throwback platformer with classic elements inspire by games in the 80s, an 8-bit style works well. But what if your game is a cow tongue-in-cheek adventure game with satirical elements and incredibly silly situations? You bet your boots you can use stick figures as your aesthetic.

Cows aren’t going to punch themselves, you know.

West of Loathing, developed by the team behind 2003’s Kingdom of Loathing, is a western RPG where you play as a stick figure traveling west to find the cause of the dead being arisen. As you expect, it’s not anything groundbreaking in narrative sense, but hot damn, this is one of the funniest games I’ve played in months.

Black and white and full of stick-figure-goodness

To give everyone a good example of West of Loathing’s humor, there is a settings menu with various options such as nerd mode (turns on descriptions for turn-based battles), the ability to turn on gridmode to see the exact placement of enemies, and colorblind mode… in a black and white video game.

Humor isn’t the only charm this game brings to the ranch. After a lengthy prologue, you’re sent out west with your choice of one of three horses and one of three partners. This is where the adventure begins. With your trusty steed, you can explore the map to your leisure, choosing locations found by found by exploring, going on quests for townsfolk, or through random encounters. The map is split into different sections with a main town in each one. These towns contain the bulk of the quests and will often grow after these quests are completed.

Quests are usually going to one point and achieving a goal there such as talking to someone and receiving an item, in old adventure game fashion. However, some will have you overcome a puzzle, which are at times gave me a challenge I haven’t experience in an adventure game in a while. Unfortunately, there isn’t an easy way to see which quests you have active. You can ask your partner if there’s anything you’re forgetting, but having to cycle through the quests this way is hassle.

Same. That’s how I end up writing reviews at 3AM.

When you are able to tackle these quests, the game starts to shine. Most of the quests involve talking to someone, obtaining a MacGuffin, and returning said MacGuffin to the first person, but the dialogue involved is delightful. There was a case in the game where a quest forced me to run around a “ghost town” (a town made of ghost buildings and people) on a series of hi-jinx and bureaucracy. In order to build a bridge, I need a logging permit. In order to get that, I need to give it to town hall. In order to do that, I need it stapled by the stapler in town after the unstapler unstapled the terrible job the stapler did. Did I mention that only one person in this town is allowed to staple the papers?

I hated everyone in this stupid ghost town. But, I loved every minute of that hate.

This crap went on for what felt like hours. And basically, if this were any other game, this would be a massive headache, but West of Loathing handles it incredibly well. I kept going because it was a rabbit hole of ridiculous rules in place and I wanted to know where it led, West of Loathing is full of these kinds of silly events, which surprisingly builds a lovable world full of idiots.
Another event that can occur while you’re exploring the map is a combat event. These are usually optional, with the player given an option to run away or fight, but fighting is the best way to level up your skills, which are required to complete certain quests. And while the quests are fantastic, the combat makes the game feel too two-dimensional.

I’m going to punch the hell out of this calf.

The combat system is a grid-styled turn-based system where players can either attack with a melee weapon or use their gun depending on what the enemy is weak to. This ends up becoming shallow, as there are few factors to change how much damage you put out and losing has very little consequences. If you lose a battle, you get angry. If you get angry 4 times, you pass out and end up in your bed on the next day. From what I’ve noticed, the only drawback is losing your food buffs that would have ended at the end of the day anyway.

Business is booming, I see.

Despite this short downside, West of Loathing is a fantastic game if you’re ever in the mood for heavy reading. The team at asymmetric have accomplished to build a large world with such a simple art style and hilarious sidequests.

West of Loathing understands the stylistic charm that a unique aesthetic can provide and that stick figures are still, at the heart of everything, rad as heck. While the combat system is lacking, hilarious storytelling and a dynamic world make up a wonderful stroll through the western-styled landscapes.

Sean Anthony likes to combine two of his passions: gaming and writing. Gaming has been a huge part of his life ever since he played his first game as a child, Kirby's Adventure. He aspires to have his name attached to an article that makes the whole world go, "Huh, that's neat, I guess."
Related Articles: Indies, West of Loathing
Share
Tweet
Share
Submit