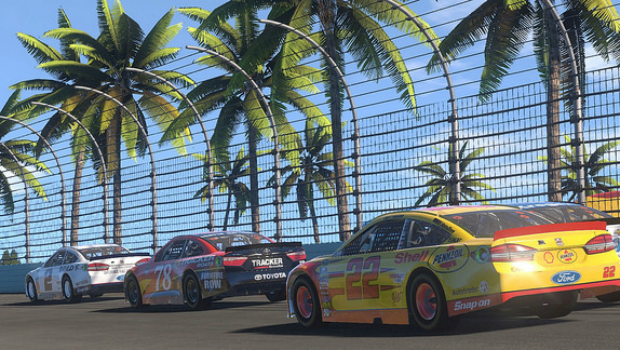 NASCAR gets a harsh reputation due to the fact that it just looks so boring. The sport suffers from being so singularly focused on a single track type, which does lead to some visual monotony. However, I do think that NASCAR gets a bad rap, especially from people who think that because it is a simpleton’s delight, and all the cars turn right, that the racing takes no skill. NASCAR Heat Evolution proves that this is definitely not the case.

NASCAR Heat Evolution attempts to do what no other NASCAR title has ever been able to accomplish, and that is to make a competent, playable game that isn’t too easy, and isn’t impossible to finish without a wreck. To the joy of racing game fans, Heat Evolution pulls it off, and shows just how much patience, skill, and ability it really takes to race in the sport of NASCAR. The signature aspect of NASCAR racing is the crowded dynamic of it all, bunched up packs of similar vehicles in close proximity, especially in restrictor plate races like Daytona or Talladega. Other racing circuits have winding courses and vehicles of differing speeds, cornering, and other parameters, the effect being a more spread out field that benefits long-term time shaving as opposed to racing against others.

NASCAR Heat Evolution is the first NASCAR title I’ve ever played that has been able to recreate that packed racing experience in a way that functions, and it accomplishes this in two ways. The first is that the game has a sliding difficulty factor that goes from 1-100, one single notch at a time.  You can tweak the performance of the other drivers to match up with how you drive.

This sounds simple, but the biggest issue with past NASCAR games is that there is never a middle ground with this. So a medium difficulty setting would have you win every race, and the next step up would be impossible to run without wrecking yourself, if not downright losing. Heat Evolution gives you much more control here, and that means you can find the perfect balance of difficulty.

Secondly, the driver AI is more spatially aware than usual, and so you have less instances of cars trapping you in corners and refusing to allow you to pass when it is smart for them to do so in order to avoid collision. It’s fairly subtle, and there are still many ways to screw up and crash, but the AI doesn’t force you into this situation every single time. Beyond that, the AI still maintains aggressiveness, and that makes for a challenge as you move along.

In one race lasting 60 laps, I spent about 20 or so battling a racer named “AJ Allmendinger”, one of the best names in all of sports. The AI was able to predict my movements, keep me at bay on the straightaways and in the turns, and was doing, frankly, a frustratingly great job at reducing my ability to reach top speed. After that bare knuckle battle, I ended up finishing 11th. It was, hands down, the greatest NASCAR video game racing experience I’ve ever had since I began playing NASCAR titles in 2001.

It impresses me that I could run a full race, move up the ranks, make moves and be aggressive without any forced errors, and I also liked that I was able to finish a race without also winning the race. That really is something special with a NASCAR game, and therefore this is already the best NASCAR title ever made.

The graphics are very pretty during races. The cars shine and have crisp colors and decals, and the shadows and sun playing on the track is high quality in both aesthetics and function. A race in Daytona during the daytime has a turn obscured entirely in shadow, and this is faithfully captured here, looking great and making for a more challenging race section. However, there are very rudimentary graphics for anything outside the races themselves, and that extends to its presentation.

Where NASCAR Heat Evolution made a great amount of effort to make in-race experiences unique, the rest of the game’s design is about as basic as it gets. There is no local multiplayer, which is a huge disappointment, especially with racing games of this caliber. The game allows for up to 40 man online races, but that is much more of a concept than a reality. More often than not, multi-player is a smattering of 6-8 man races with lots and lots of mischief.

The game modes are incredibly simple, and frustratingly, you have to unlock the ability to run a full season. That is the most asinine thing I can imagine, because it forces players to run numerous exhibition races just to unlock a simple game mode. Additionally, there are no alternative paint jobs, no extra racers or legends, and nothing fun to unlock. The game asks you to run a bunch of one off pointless races with the prize of being able to run a bunch of races as a season.

Unfortunately, the game also mimics recent sports titles and provides points in order to level up.  The game hastily throws this in, and unlocking different season styles (others beyond a full season are unlocked first along the way) is the only applicable goal with this system. Basically it’s a complete waste of time, and the game would be better off without it completely.

I will give them this though; the running of several exhibition races with no actual long term goal does resemble the level grinding of RPG games, so maybe I’m just overlooking an attempt to really capture an RPG experience. You can form your own opinions here.

A career mode is also available, but this is also very rudimentary. You can craft your face, but no matter how much you try it never quite looks like a human. You can only choose between 4 numbers only, and you don’t even get to name the driver. Get ready to watch GamerBro420 take the lead from Kevin Harvick in the cup standings and have all sense of immersion bothered beyond its limit.

Patrick Rost has been with Gaming Trend since 2013. At first focused on sports coverage, Patrick has gone on to cover a wide range of games and other products for the website. Outside of Gaming Trend, Patrick writes and records music, grinds perpetually in Elder Scrolls Online (PS4), and lives day to day with his two dogs, Bob and Stella.
Related Articles: NASCAR Heat Evolution
Share
Tweet
Share
Submit