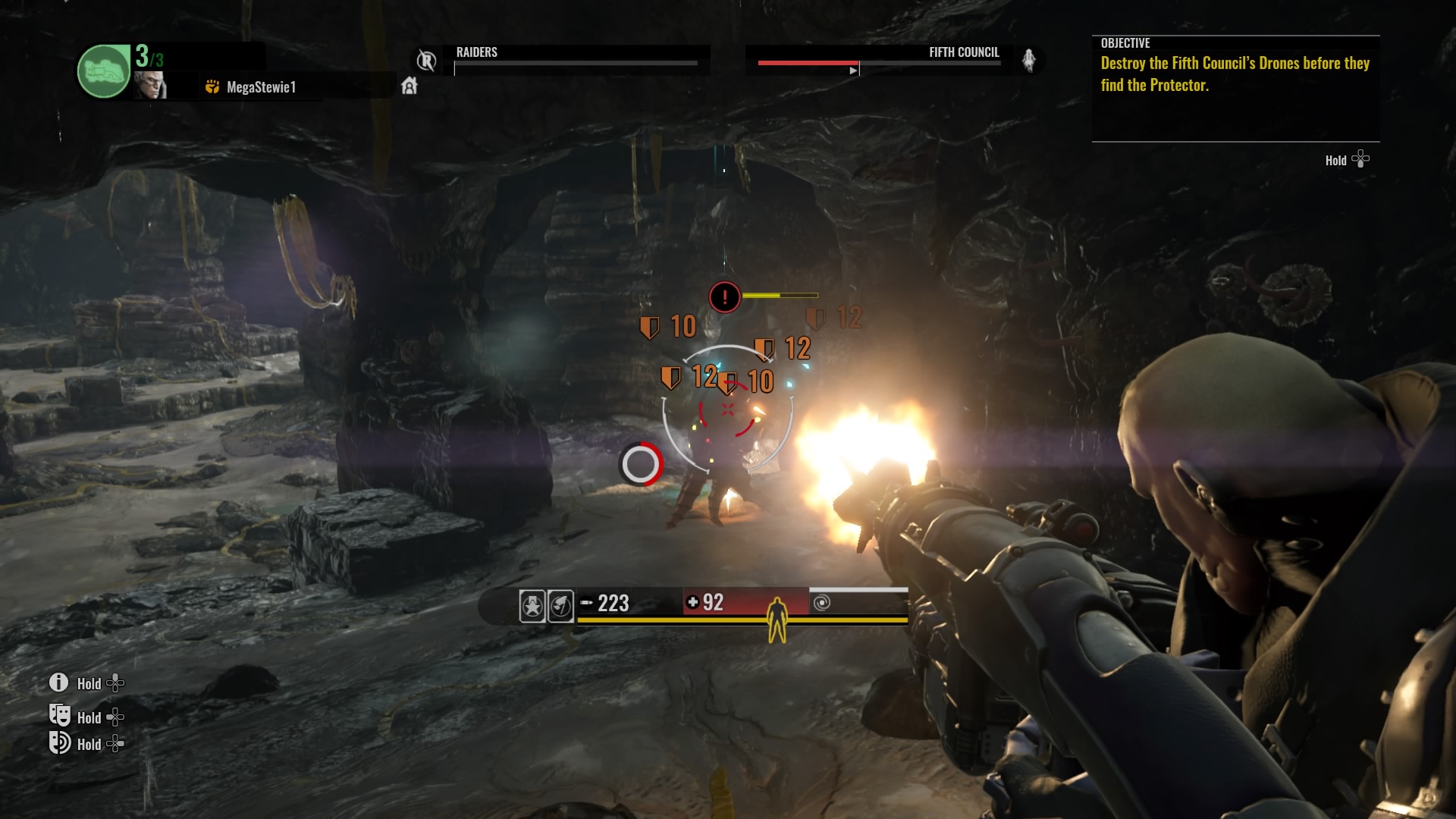 Jump right onto the Broken Planet and discover the history behind it in this action-adventure title. On what is now known as the Broken Planet, multiple factions fight to obtain the energy source known as Aleph. This powerful energy comes from the planet’s core and the battles over it have devastated the world.

Once you start the game up, you are thrown right into the first level of the prologue. It provides you with a short level to learn the basics of the game, which is helpful. After you complete this, you can move onto the second and last level of the prologue. From here on, you have the option to take on missions alone or search for other players online. Depending on how confident you feel, you may want to practice solo a little first. The prologue missions are the perfect place to do this. They provide a good challenge, but aren’t overwhelming on their own.

Taking on the 2nd level of the prologue

Alien Myths is the first campaign released for Raiders of the Broken Planet and it’s a strong start. Alien Myths contains four missions that center around the raiders trying to find the legendary Protectors in the hopes that their power will be able to drive the invading humans away. The myth states that with their powers combined, they would be able to teleport all of the invaders off of the planet in an instant. Each mission plays differently and will definitely keep you on your toes. For example, you could be escorting and protecting an ally, shutting down generators, or even just gunning down every enemy in your way. There are no checkpoints in the missions, so you need to be careful. The player is given 3 lives and after that, a timer pops up; this timer counts down until your lives are refilled, but if you die before it ends, the mission ends.

The actual combat is a mixture of running, gunning, and melee. The melee combat works like rock, paper, scissors to an extent. You can punch, grapple, or dodge; the punch stops a grapple, a grapple catches a dodge, and a dodge avoids the punch. If both combatants use the same technique, they will cancel each other out unless one hits just before the other. You need multiple punches to take down a foe, but only one grapple needs to connect for an instant kill. Melee kills are important because they are the only way to refill your ammo. The amount of damage taken actually affects your fighting ability. If you are hurt badly enough, you start limping and all of your attacks are slower. It’s a nice touch because it adds an extra sense of realism.

Right before a mission starts, you get to choose a character to play as. Every character has their own weapon, ability, strengths, and weaknesses, so they all play differently. The character select screen helps out with this, as it will let you know if a character is recommended for the mission or if it would be much harder for them when you select them. That way you have the option to make the mission easier or harder on yourself. Taking the time to test out each character will allow you to determine who works best for you. The types of characters include a sniper who can warp to a vantage point to shoot, a shotgun wielding madman with a kinetic shield, a minigun wielding brute with a repelling barrier, and more.

As fun as the game is playing solo, a big draw is it’s online capability. You have the option to search for as many of the missions as you want at once. In that case, once other players are found, it will choose whatever mission they were searching for, as they may have only been searching for a specific one. Only one of each character can be in a mission, so be prepared in case someone else takes your first choice. The levels work the same online as they do offline; the main differences being having backup and the feeling that the enemies get tougher to counteract that fact. After playing alone, it was refreshing having teammates for a change. That doesn’t mean it’s time to get comfortable; the whole team is going to have to work together to stay alive and beat the level.

Taking on a mission with a team

There’s another interesting twist added to the multiplayer as well: the antagonist. This option allows the player to search for a team of players about to start a mission and join them; the catch is that this player will be working against the others. The antagonist can wait until they see the other team’s lineup before choosing their character. That way they can base their character choice on what they’ll be up against. The goal of the antagonist is to kill the other team and prevent them from completing their mission. It’s cool getting to experience the game from the side of the AI enemies, especially after beating the mission with a team beforehand. The antagonist has an unlimited number of lives, but their respawn timer takes longer the more they die. Based on where the opposing team is, a number of respawn points are available after death. Use these to your advantage and get revenge.

Overall, the multiplayer experience makes the game much more fun. My only issue with it is that I haven’t had much luck finding other people to play with, and when I have, it took about five minutes to find them. The reason for this may just be because not many people are playing it yet or I could be barely missing chances to get into more games. With that, I can still say Raiders of the Broken Planet is worth playing, even if you stick to only single player, but you should definitely give online a chance as well. I’m hoping finding games becomes easier soon so that more people can team up and take on the Broken Planet together.

Raiders of the Broken Planet delivers a strong shooter experience. The combat of the game keeps you engaged, as you need to be ready to be flanked at any time. The campaign is short but sweet, and leaves you wanting more. The missions are challenging without being too tough, even playing solo. Looking forward to more campaigns being released.

Codi loves to play video games and watch movies. He will watch almost any kind of movie just to experience them. His ideas take inspiration from the shows and movies he watches, and games he plays. He also loves a good pun.
Related Articles: Alien Myths, Raiders of the Broken Planet
Share
Tweet
Share
Submit