Gloomhaven’s Steam port is a rare treat among the dubious world of board game to video game ports. The tactical dungeon crawler translates remarkably well, though not perfectly, to the PC, keeping intact the tactical combat while enhancing the atmosphere with music, voicelines, and a well realized dungeon-scape. Despite some minor quibbles I have with the interface, I found Gloomhaven on PC to be among the best board game adaptations I have seen, and holds immense satisfaction for a single player or a team.

Gloomhaven’s basis is the titular board game that exploded onto the scene in 2017. The original and PC versions task 1-4 characters with traveling the land engaging in turn based tactical encounters. Your campaign, which can last over 90 missions in length, involves play at several different levels: you can build your reputation within the city of Gloomhaven, as well as its prosperity, and engage in events there. While traveling, encounters will give you choices that can affect future missions. Those missions are tactical turn based dungeon crawling, with a few twists to set Gloomhaven apart. 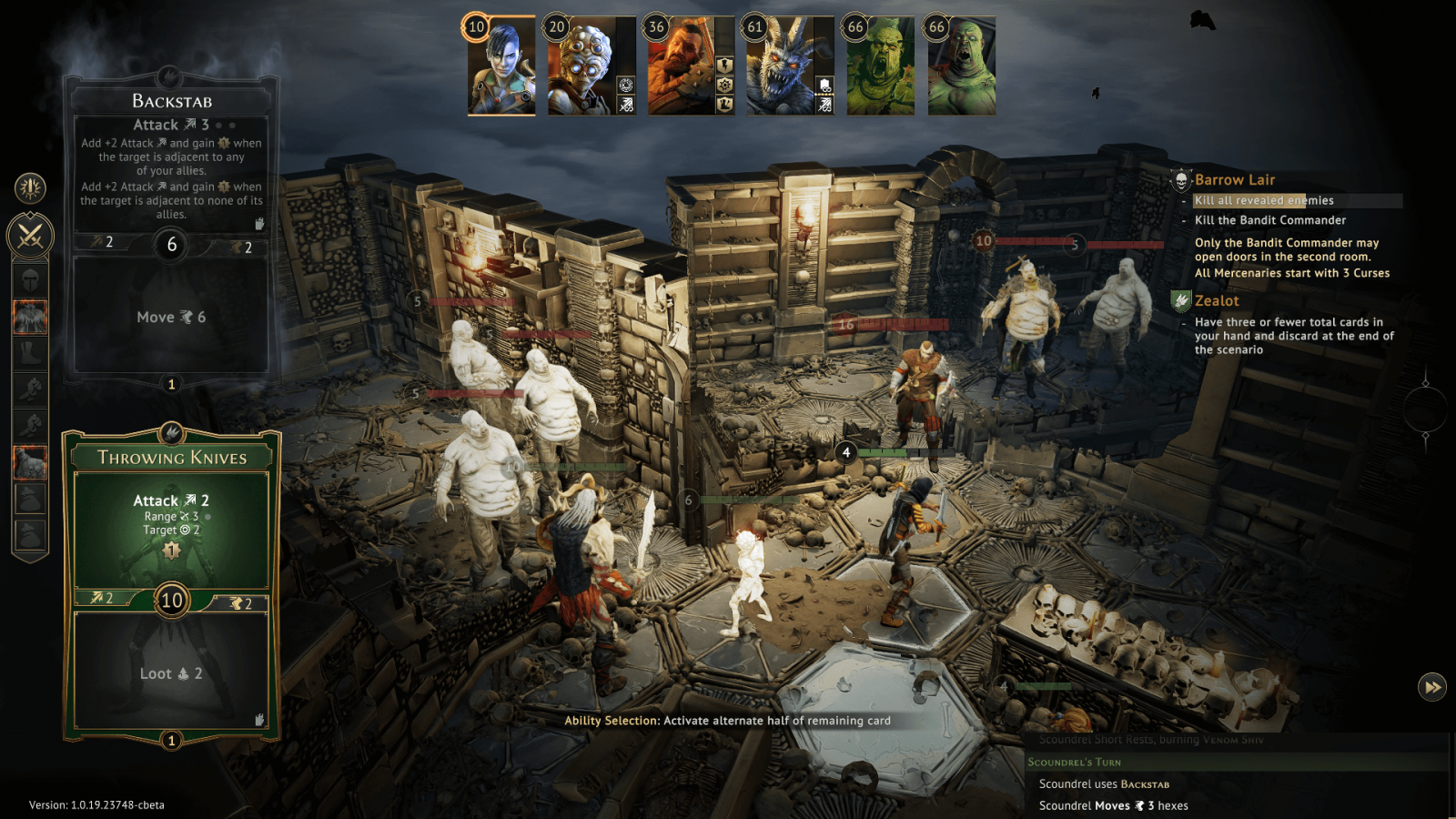 The card based mechanics are Gloomhaven’s most strategic and unique feature: all actions are governed by a character’s deck of cards. Those cards each have a top function, usually offensive based, and a bottom, usually defensive or movement based. They also have an initiative number. Each round you choose to use the top effect of one card, the bottom of another, and either one’s initiative. All characters and opponents then show their cards and take those actions in initiative order. You discard most cards after use but some allow you to burn them, removing them from the discard pile, for more powerful effects. Managing time is crucial, as every recovery of your cards removes one for the rest of that mission, reducing your options and taking you closer to exhaustion. Long rests take an entire round, heal you, and allow you to choose the burned card; short rests allow you to act but force you to burn a random card.

Damage is also random, affected by cards from -2 to x2, including a miss and additional effects you can generate through events, cards, or level ups. Characters advance with equipment, level ups, and Perks generated through special requirements during missions. Choices during the game will open up alternate paths and story options, making for a rewarding replay. Gloomhaven is perfectly balanced to keep you feeling on the verge of death, barely pulling through to survive until the end.

The PC allows you to campaign at lightning speed, calculating everything immediately and abrogating the need for lengthy set up and teardown. In some ways it’s a strict upgrade from the board game mode, as it also includes online or offline co-op, a rewarding single player campaign, a Guildmaster mode with an additional campaign with more videogame focussed progression, and options for player made maps and missions. 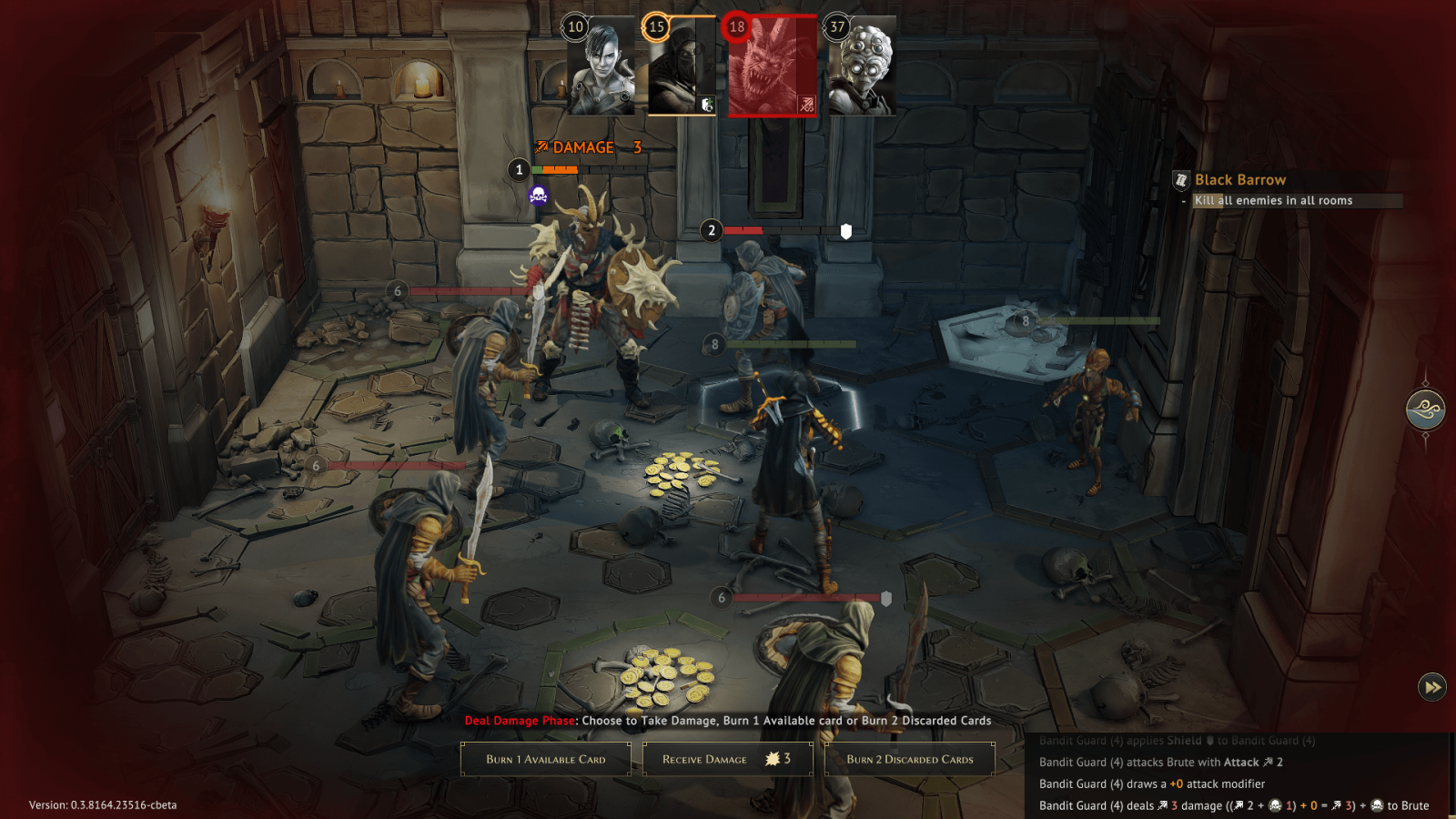 The setting is standard fantasy fare, with some new races and factions to shake things up, but unfortunately doesn’t contain any ideas that are themselves memorable. Gloomhaven’s foremost goal is mechanical, and it’s clear that the story was built as a justification for dozens of exploratory combat encounters.

The adaptation is faithful to the original, but adds in figures with life, animation, and a limited number of skins that I think will increase over time. The animations were sometimes wonky and stilted, but only noticeable during long movement abilities. They also feature limited voicelines, and a narrator for the main campaign. The environments display a pleasant variety of lighting effects to sell the mood, genuinely feeling more like a dank necropolis than a board on a table.

It’s difficult to find fault with something this direct and competent. Gloomhaven was an exceptional game, and this more than capable adaptation makes the experience all the more accessible and moddable. My only complaints are minor and in some cases subject to change. At the moment, not all player classes are available, though these are likely to be implemented later. The tutorial is obtrusive at first, if necessary and clear for new players, but the lack of an option to skip by it is extremely odd. This is first and foremost an adaptation geared towards an existing audience that is likely to be familiar with the game’s basics.

The only genuine flaw I can consider is that not all aspects of Gloomhaven the board game translate well to Gloomhaven the videogame. It can be difficult to discern certain information or abilities that are clearer at the table, and the constant need to confirm actions and the order of actions makes the interface consistently annoying, though not outright painful. As good as single player is, Gloomhaven still functions best with a team, and a one person campaign of this does start to feel like a grind over time, especially when characters get to their higher tiers of power and have a bevy of options to consider.

Gloomhaven’s jump from board game to PC keeps the game as strategic and satisfying as it ever was, all while streamlining the experience and opening it up to new avenues of play. The genuine effort of the creators shows through to a game that is worthy for fans and newcomers alike to struggle against the hordes of doom that threaten your very cards.

John Farrell is a legal aid attorney specializing in domestic violence, living in West Chester Pennsylvania. You can listen to him travel the weird west as Carrie A. Nation in the Joker's Wild podcast at: https://jokerswildpodcast.weebly.com/
Related Articles: Gloomhaven
Share
Tweet
Share
Submit