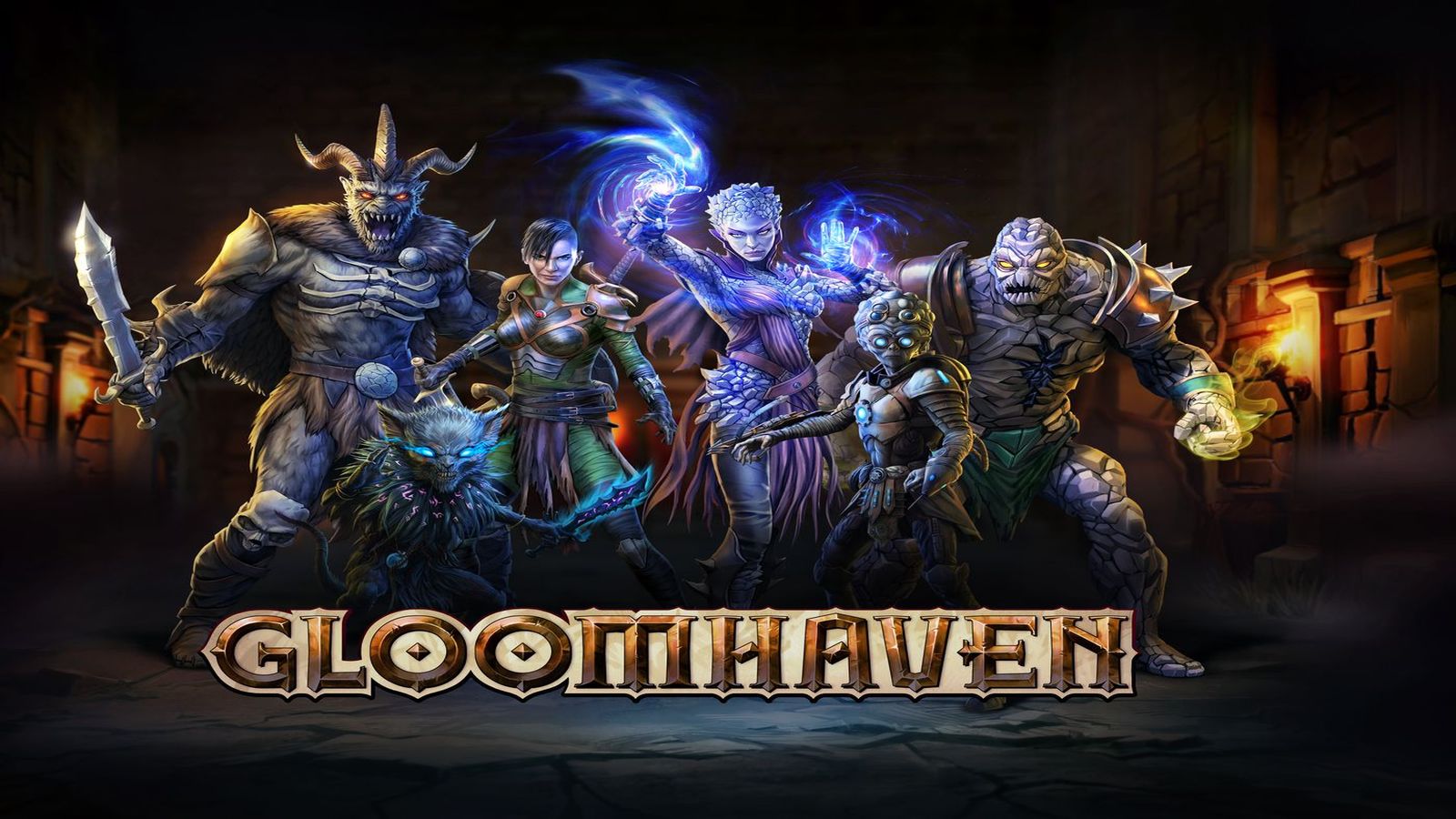 Gloomhaven, an often misconstrued safe haven for its denizens and adventurers alike. It is here in this world that adventurers gather to set out on grand adventures to either make the world a safer place, or shroud it in a bit more darkness. The brainchild of Isaac Childres and Cephalofair Games, Gloomhaven the board game has been a massive hit for the board game community and just anyone who enjoys role playing and dungeon crawling. Before Gloomhaven got its official digital version, there were many versions of the game played through Tabletop Simulator on Steam. These versions were clunky, and while they were decent experiences , nothing recreated the board game version well.

Enter Steam, being the platform of all pc gaming platforms, and the collaboration of Flaming Fowl Studios and Asmodee Digital. This collaboration provided the experience many were clamoring for in taking the board game to a digital, and elevated format. So where does this all start? Well I can say for one thing that having played Tabletop Simulator, having played and owned the board game, and having successfully played the digital version on the PC there is tons of room for a board game version and a digital version, even if you are or have played both. 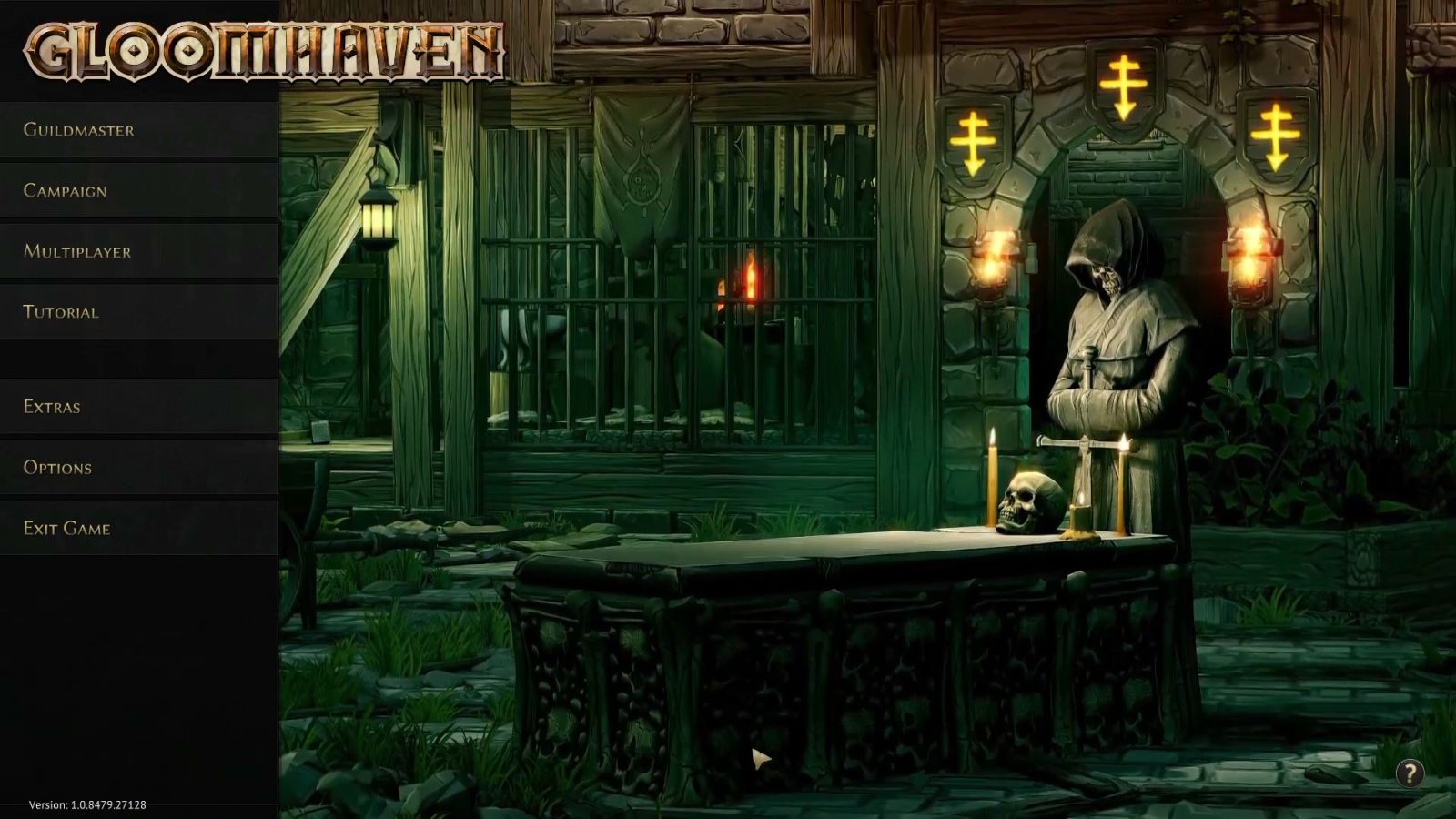 At its start Gloomhaven offers players few choices to get started and leaves the rest of the world shrouded in mystery. This mystery is a welcome choice as it entices the player like a good book, keeping them coming back for more until it divulges all of its secrets. It is here the digital version of Gloomhaven is a standout and makes way for more people to access it than ever before. To understand how intuitive the digital version is compared to the board game first there is a bit of the board game to understand.

In Gloomhaven, 1-4 players take on the roles of mercenaries that are teaming up to go on adventures to dangerous places throughout the world using the city of Gloomhaven as their base camp. From here players experience encounters while journeying and returning home -players explore caves, ruins, and forests all littered with enemies. These settings give players their chances of moving through the aforementioned terrain, to battle these enemies and work with the other players towards a common goal, all while having their own goals. This after all is true to being a mercenary. Players take actions and their stamina is based on a hand of cards the players put together before venturing into the unknown. This hand of cards tells players how long they might last in a scenario. Move too fast and probably succumb to the plethora of monsters around, move too slow and, well, you would run out of cards before even opening all doors or encountering all the monsters you were meant to encounter. 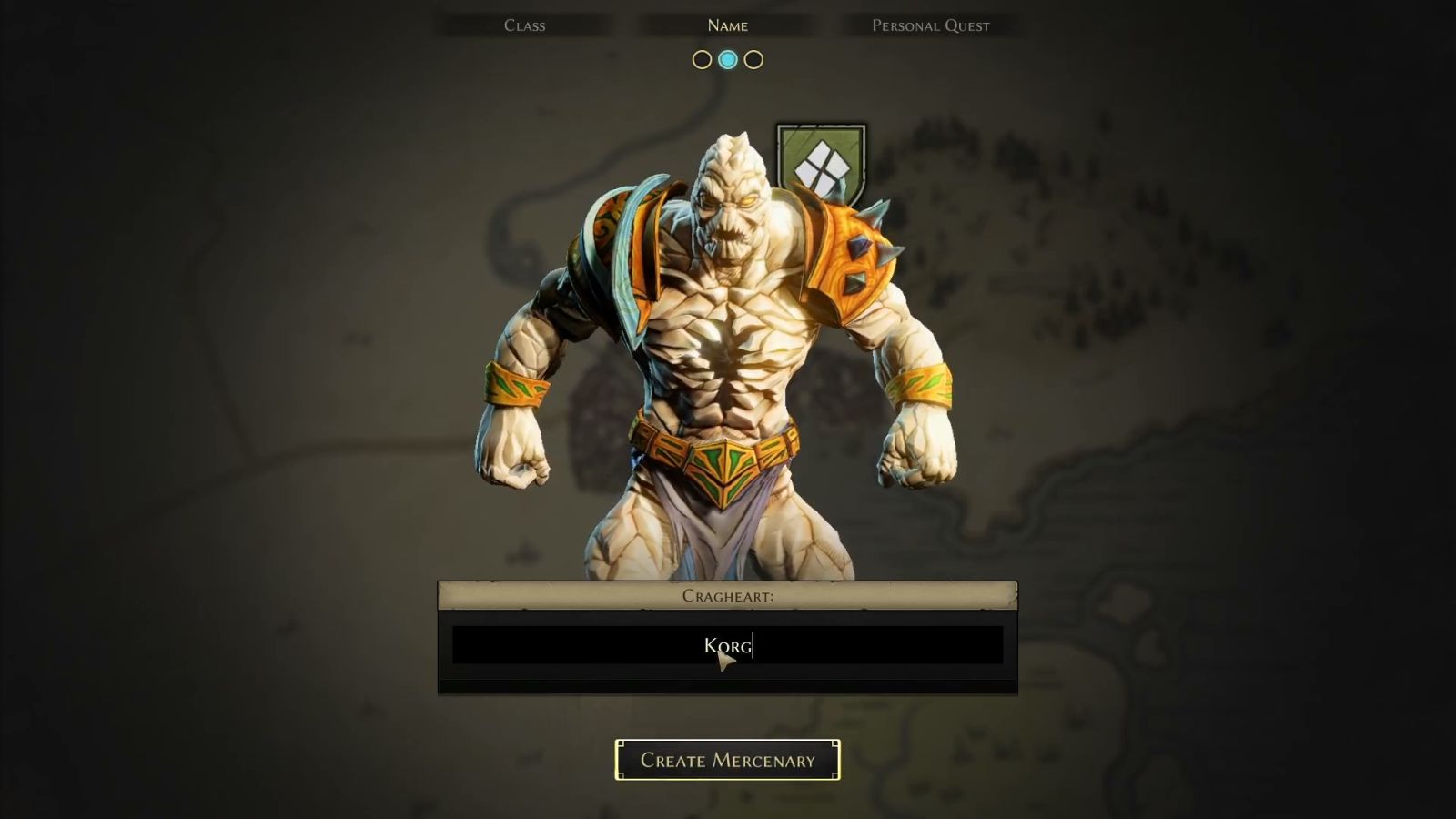 It is here where things get tricky since not all cards are created equally. Some cards have effects you can use over and over once the cards get back to your hand. Others have one time use effects per scenario that you play, thus those are more of the “use those abilities at the most efficient moment” types of cards. Players continue through the dungeon working together and, well, looting things before others, and often looking out for themselves, but also not overextending.

So why does the digital version of Gloomhaven shine here compared to the board game? For starters the animation in the digital version is beautifully done as is the narration. More than that, during a game of Gloomhaven, players typically play their respective characters and then control the monsters as the monsters get their turns. This involves flipping combat cards, determining the enemy initiative and what they can do during any given round. It also can include moving the enemy, dealing damage to the players with many enemies as is often the case, and using special abilities and trying to keep track while doing all of this. In the board game one person typically takes on the role of doing a good amount of this work and has to play more than just their character. The digital version, which is an absolute beauty of an implementation, does all of this work for you and players are able to just play their characters and role play a bit more than usual.

The upkeep done by the digital version takes it out of a player’s hands and makes it follow the rules set forth by Cephalofair Games, and keeps the pace moving throughout a game. After playing many games of both I found the digital version moves at a much quicker pace than its physical counterpart. This is a definite welcome change as oftentimes the physical version would take an entire night to complete one scenario, where the digital version can easily be done in a matter of an hour or two. 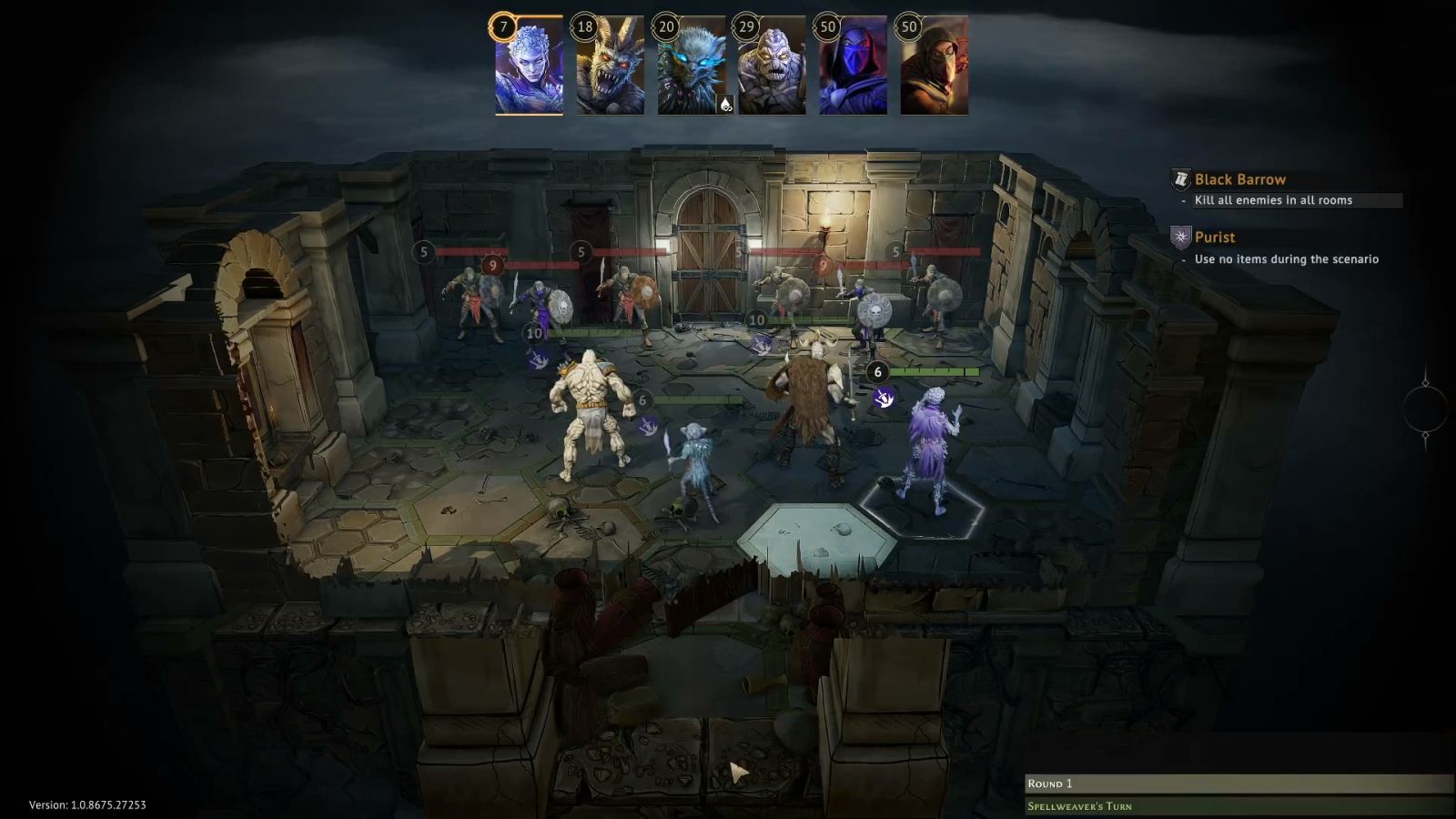 As to what you get with the digital version, well you get your copy of the game, and when I say that I do mean you get the entirety of the base game, albeit without cool miniatures, but here the digital version makes everything a much more pleasant experience. First and foremost players continually get to focus on their cards and scenarios. They also get to see animated implementations of their characters they have chosen and the attacks the characters do, which is pretty cool. Second players get what is the equivalent of a save file and the game keeps track of progress and where you have been and what you have done rather than a single player doing that. Next players get to see the fruits of their labors after having leveled up or bought more items or unlocked more characters.

My experience with the digital version of Gloomhaven started much like my experience of the board game with the mission to the Black Barrow. This mission is without a doubt a great starter mission, it can at all times be unapologetically brutal, easy, fun, and compelling. With the different difficulty levels provided players can often mistake Gloomhaven for another game that is “just keep dying till you get lucky enough to complete the mission” type of game. That is definitely not the case here as the difficulties require careful planning, teamwork and a bit of luck in the end. Each increase in difficulty adds health and damage and levels to the monsters, and makes the scenarios that much harder since players do not get stronger until their characters level up or they buy items to use.

Gloomhaven the digital version also includes an on screen heads up display that is informative about what goal you have for the scenario, what the overall win condition is for the scenario and keeps your health and monster health as well as positive/negative effects on screen to know what is going on at all times. When resting (getting your cards back while losing one permanently) the interface gives prompts on whether you really want to rest or not and what cards are available or not. Then all the cards return to the player’s hand and the scenario continues. 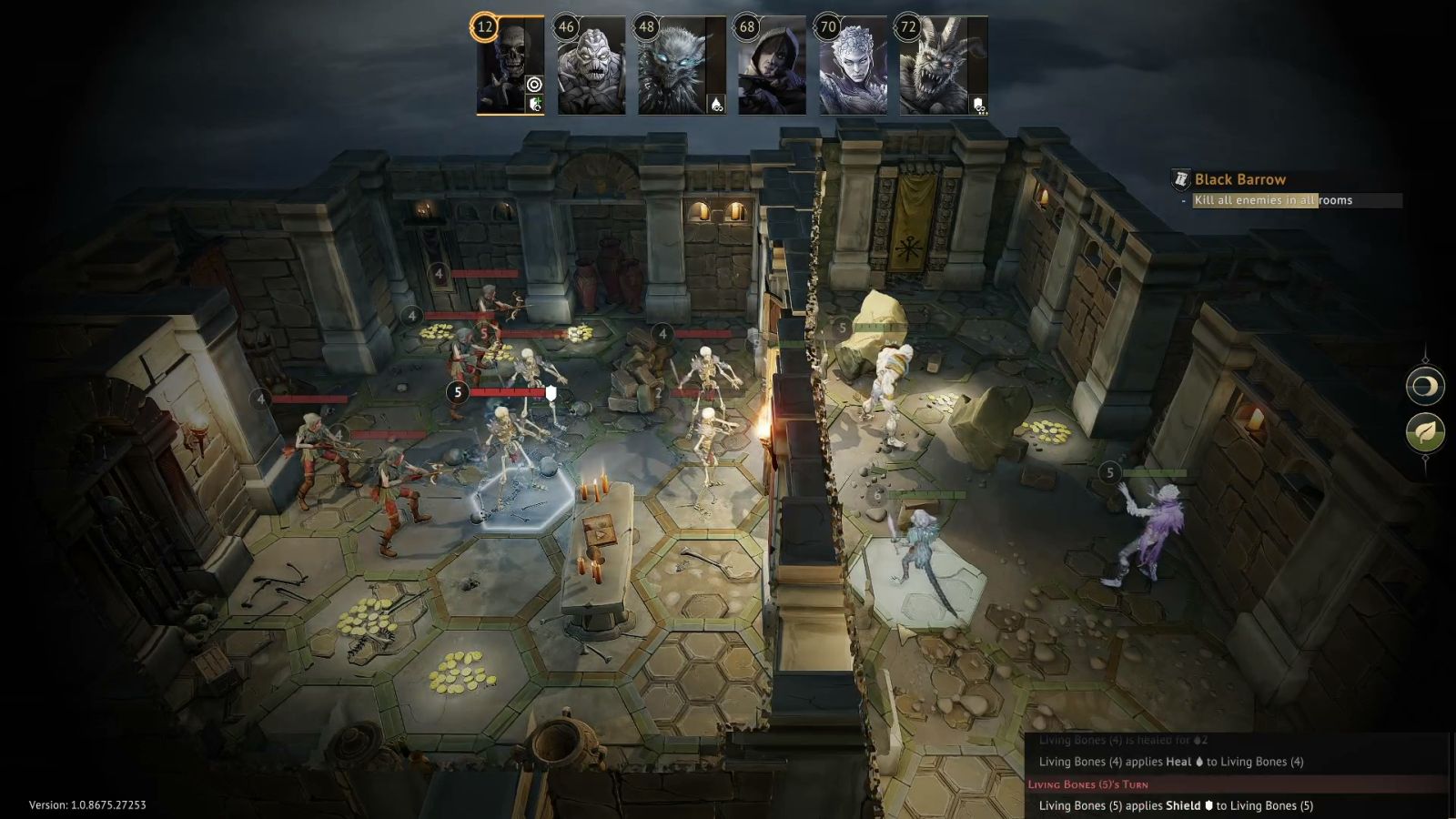 The digital version of Gloomhaven keeps players coming back, without all of the hassle that the physical board game version did. Oftentimes it is easier to get together with people online on the computer compared to meeting up in person. Getting together was made a bit harder with the pandemic and because of that more people than ever spent more time on electronic devices such as computers. This is undoubtedly where Gloomhaven found its niche and hit its stride.

While all this is well and good and Gloomhaven remains one of the most notable board games of all time, the digital is not without its certain drawbacks. If you know no one else with a copy of Gloomhaven then you are often spending it alone and that is not always the most fun experience. The programmed enemies are often harsh and unforgiving and losing scenario after scenario can feel even more daunting staring at a screen instead of playing in person. Gloomhaven might not be the most customizable game, but a small amount of cosmetic customization would be nice. These issues, while minor, do keep Gloomhaven from hitting its best stride and ultimately hold it back.