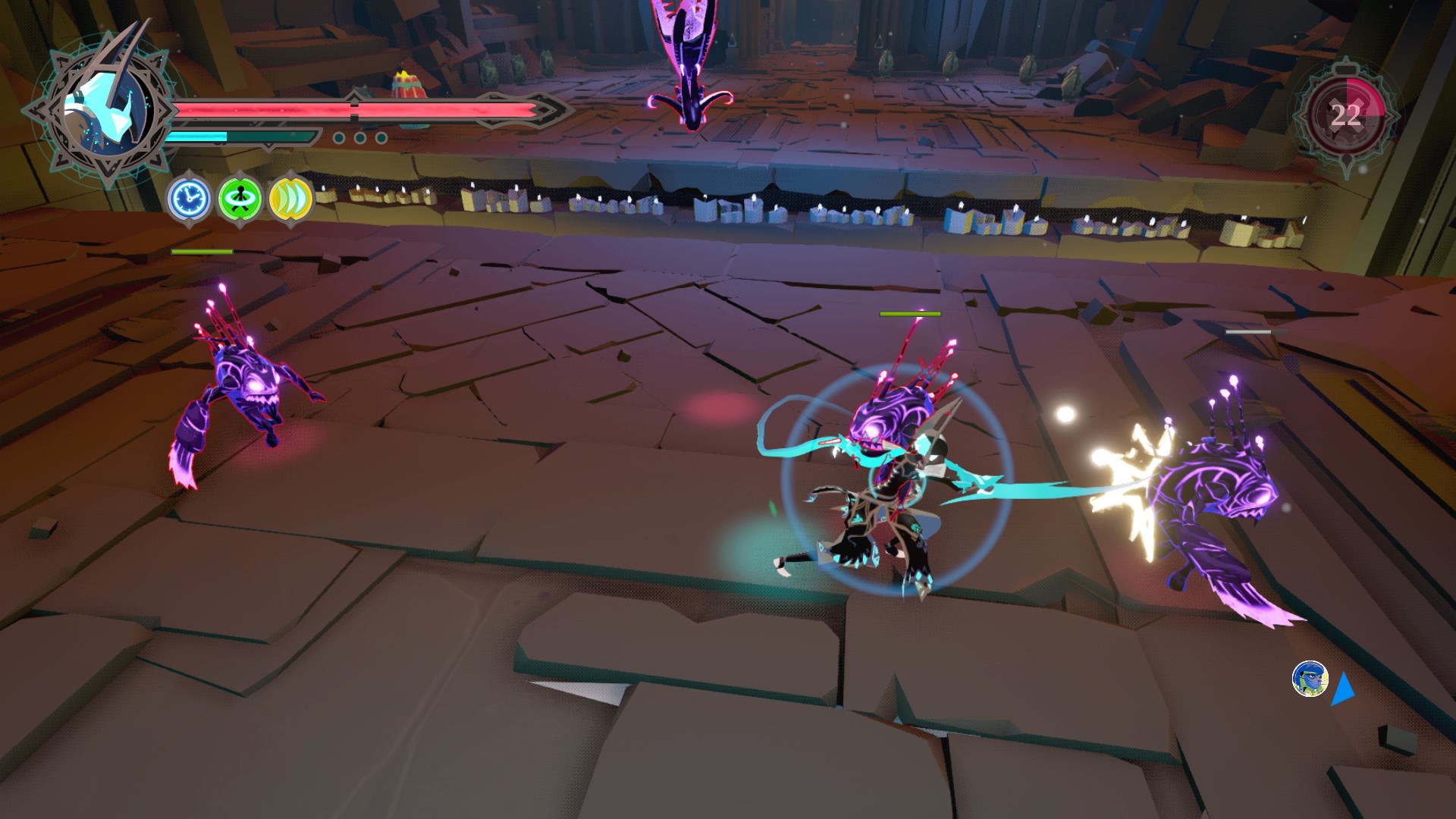 Have you ever wanted to go back in time and change the outcome of an event or decision? In Omensight, you play as the Harbinger and are given the opportunity to do just that. What results is an adventure that is equal parts entertaining and thought-provoking.

In the land of Urralia, a war is being waged between Pygaria and Rodentia. Emperor Indrik is planning to attack the Rodentians and end their defiance once and for all. The one hope for peace is the Godless Priestess Vera, who has recently been murdered by an unknown assassin. This has seemingly caused the world to perish at the end of the day as a result of an evil god named Voden being released. The Harbinger is tasked with figuring out this murder mystery and doing whatever it takes to prevent the apocalypse.

With the end of the world near, you may feel like you need to rush, but The Witch has brought you to a safe place outside of time. This serves as your hub area, placed right next to the Tree of Life. In the hub, there are four statues, a small tower-like structure, a pedestal, and an orb near The Witch. The statues are meant to represent the companions you can follow, but they all aren’t available right away. As the story progresses, you will bond with their souls and gain this option. The tower is where you will deposit experience in order to level up. As you level up, you unlock new abilities and upgrades to said abilities. The pedestal allows you to offer amber in order to receive blessings, which includes increased sword damage, increased health, faster cooldowns on skills, and much more. These are incredibly helpful, so collect as much amber as you can.

Since a big aspect of the story is a murder mystery, the investigation orb is very important. Checking the investigation orb shows you a timeline that you slowly piece together, and also has a board laying out the main players in the story. Each character has four pieces of information that you can learn about them from playing the game. Depending on how the day goes, what you learn can be different and it will be marked on the board for later. Being able to check this at any time in the hub makes it easier to remember important things in the story.

In order to find out about what happened, you need to choose which character you want to follow. This sends you to that character at the beginning of the day as you help them with whatever their task is before the day ends. At a certain point, the apocalypse arrives and the Harbinger is teleported back to the hub in order to save them. Any new important information learned is noted in the investigation orb and The Witch will give you advice on what to do next. From here, you upgrade as you see fit, and then decide who you’re going to follow next. Taking what you learned into account can guide you down the right path and let you solve the mystery.

You can replay a companion’s day as many times as you see fit and travel with companions in any order you choose, but planning things out will be more beneficial than just blindly choosing someone. For example, with one character you may notice a door you need to get through has a seal on it that neither of you can unlock, so you are forced to take another path. When you get back to the hub, you may want to try and figure out who you can learn about that seal from so that you can get past it later. There are plenty of doors with one of three seals on them, which either open up alternative paths or just lead to dead ends with chests and/or memory pedestals. These pedestals give you access to a short story detailing a memory of one of your companions. They aren’t important by any means, they are just fun little bits of backstory that you can find.

Speaking of information, the biggest breakthroughs you come across are the Omensights. Omensights are visions that show you an important event concerning Vera. These can be shown to your companions in order to enlighten and influence them. At this point, you transition from the follower into the leader, and have a bigger role in shaping the day. This doesn’t mean you control every action, it merely means that by relaying this vision that you’ve changed the way the day plays out. The Omensights also serve as a transition into the next act of the story. This was a clever way of adding progression into a story that focuses on going through the same day again and again.

The Harbinger herself is silent but powerful. She fights with fast paced sword skills and some other interesting abilities as well. These include the Phantom Blast, Delay of Fate, the Phantom Grasp, the Phantom Dash, and Lethal Flurry. The Phantom Blast is an energy projectile that you can fire, Delay of Fate slows down time in a dome for a short time, the Phantom Grasp lets you grab and throw enemies or objects, the Phantom Dash is a quick dash, and Lethal Flurry is an instant kill sword strike. The Phantom Blast and Lethal Flurry both require energy, which is built up by comboing enemies and filling up a meter and orbs. After a short time of not hitting enemies, the energy drains rapidly, so if you want to use these moves, you need to act fast. The remainder of the abilities listed above only rely on cooldowns, which allows them to be used more often. This is perfect, as Delay of Fate became an essential part of most of my fights throughout the game.

The combat itself is fluid and the reaction times are immediate. Being able to jump from target to target, using multiple abilities back to back makes you feel powerful. This, coupled with the amazing sound design, keeps the adrenaline pumping and the action engaging. The companions being allies at times and enemies at others added another sense of depth. This provides you with the good and bad aspects of each of them, changing things from black and white into more of a grey area. The story is inspired by the “Groundhog Day” trope, but adds a complex and intriguing twist to it. The more I played and learned, the more I was excited to continue. I genuinely felt a desire to figure out what happened and prevent the end of the world. Omensight does a great job at crafting a beautiful world full of life and tragedy, both graphically and metaphorically. So get ready to jump into the shoes of the Harbinger and stop the apocalypse.

Omensight is an amazing twist on the "Groundhog Day" style storyline. Some thinking and planning is necessary, but The Witch makes this easier. The gameplay is fast, fluid, and very fun. It may seem repetitive to some, but slowly learning and altering the day is part of the journey.

Codi loves to play video games and watch movies. He will watch almost any kind of movie just to experience them. His ideas take inspiration from the shows and movies he watches, and games he plays. He also loves a good pun.
Related Articles: Omensight
Share
Tweet
Share
Submit