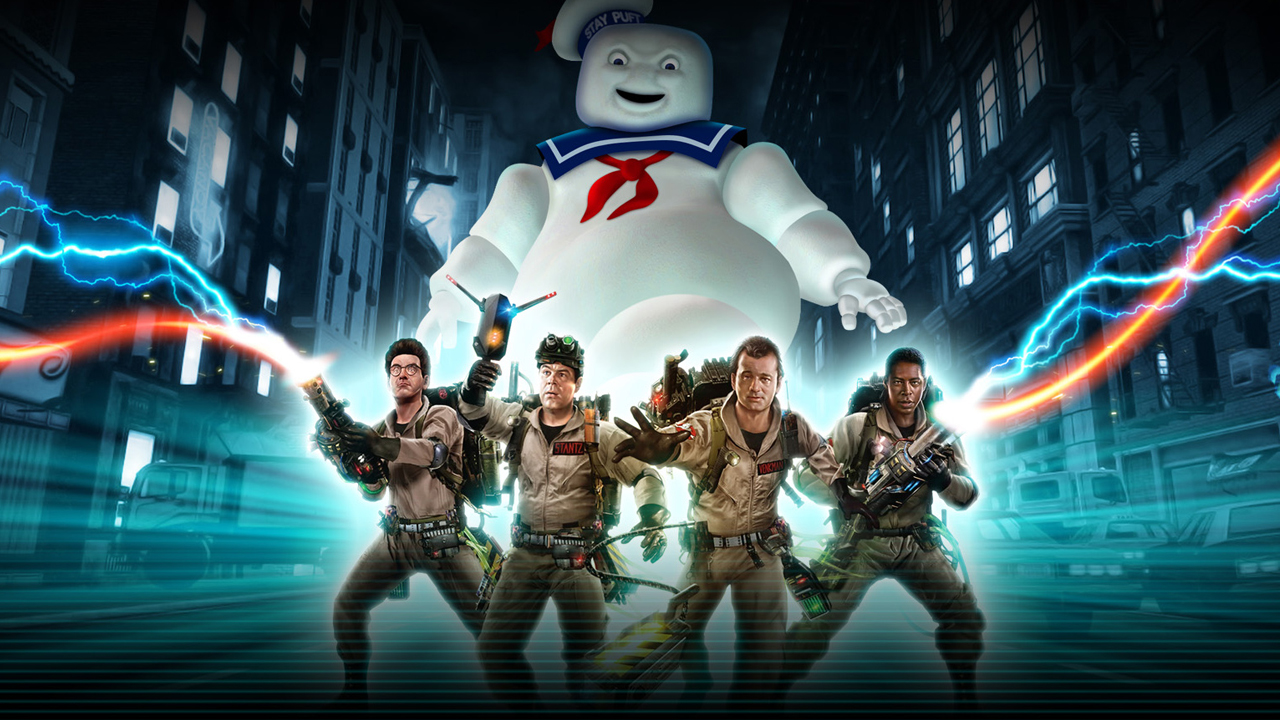 Developer Saber Interactive (who are also handling The Witcher 3, Vampyr, and Call of Cthulhu for Switch) are tackling the remastering of one of the most enjoyable cooperative games of the entire seventh console generation. I’m not talking about that 2016 trash mound unfit to sport the name — no, I’m talking about Ghostbusters The Game. Affectionately known as “the only way we’ll ever get Ghostbusters 3”, it was the last joint project between Bill Murray, Dan Aykroyd, the late/great Harold Ramis, Ernie Hudson, Annie Potts, William Atherton, and more from the original cast. Now that magnificent reunion piece is getting a fresh coat of paint and a refresh for a brand new audience. Could this game be as amazing as I remember, or does a decade of nostalgia color my memory?

The first thing you should know, if you missed the boat on this one the first time, is that this is the most authentic Ghostbusters experience on the market. Not only does the game feature the voices and likenesses of the main cast, but many of the supporting cast as well. Better still, the story for the game was written by none other than Dan Akyroyd and Harold Ramis themselves. You know who doesn’t get a line? You.

While we all know the original Ghostbusters crew, you get affectionate names like “Rookie”, “Sport”,”Kiddo” and the like. Explained away as not wanting to know your name just in case your equipment explodes rendering you into tiny bits, the team proceeds to indoctrinate you properly — by strapping “an unlicensed nuclear accelerator” to your back and putting you to work busting ghosts. I mean, it’s in the name, isn’t it? Here’s the first 45 minutes of the game in motion:

One of the things I appreciate about Ghostbusters The Game was that it was very ahead of its time in terms of HUD. Instead of cluttering the screen with meters and other miscellaneous whatnot, everything you need to know is contained on your Proton Pack. The right of the pack tells you how close you are to overheating the device, with the screen turning red at the edges to let you know you’ve taken a knock or two. Additionally, there are visual indicators on the pack for each of the four upgraded firing modes you’ll obtain throughout the course of the game, each with their own puzzle solving and ghost busting purposes. 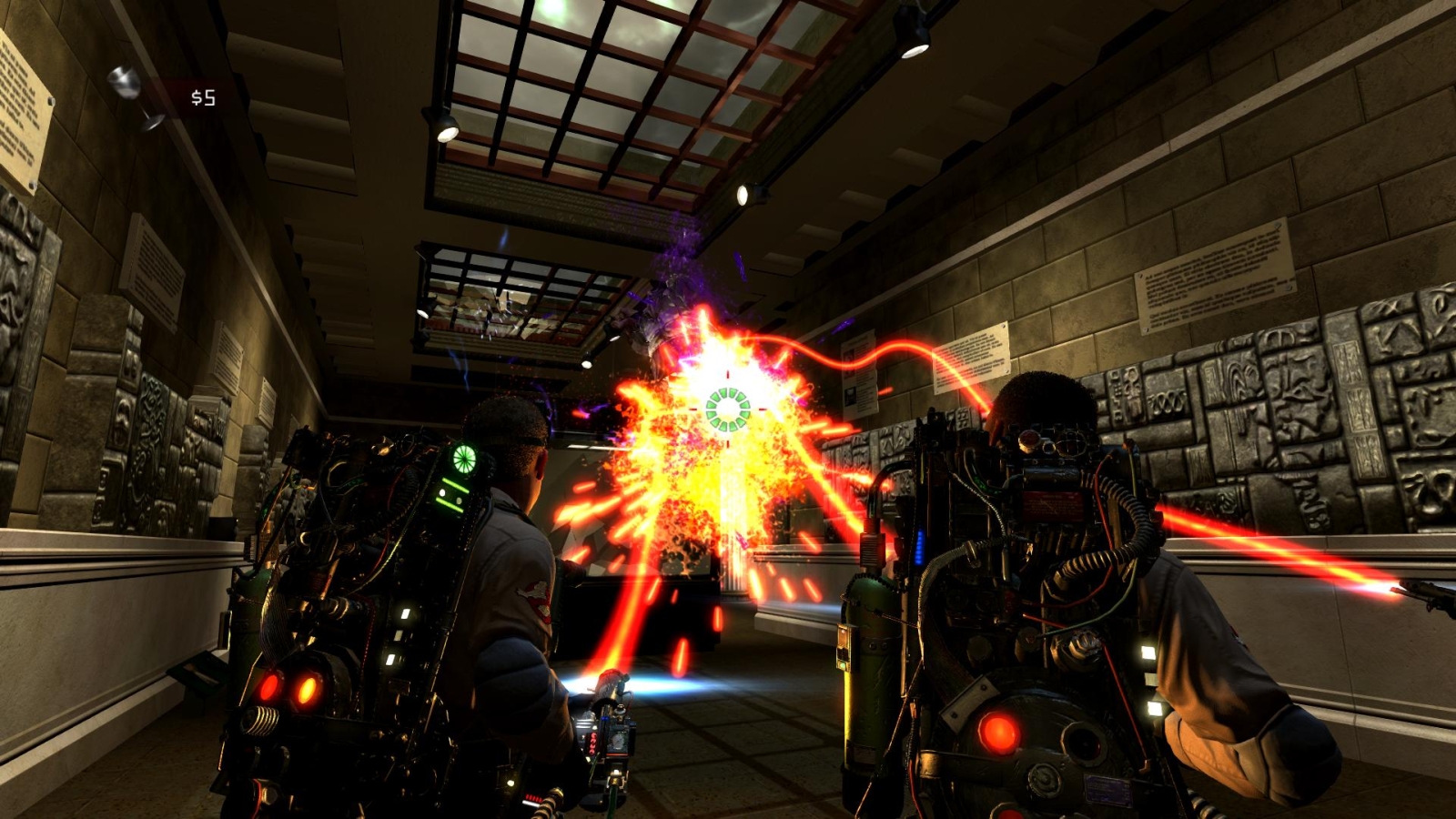 The whole HUD is contained on your Proton Pack.

Capturing ghosts, using the PKE meter to scan ghosts and paranormal items, and finding otherworldly artifacts in the environment yields cash. At any point you can drop money onto upgrades for the proton pack, its various functions, the ghost traps, and more. As long as you are busting ghosts and looking around to a small degree, you’ll have enough cash to buy every upgrade in the game. Ghostbusters The Game is about the story, not pushing you into some painful grind, and it’s a nice reminder of a time when that was normal for the industry.

Over the course of the eight hour campaign you’ll visit iconic landmarks like the Sedgewick Hotel, New York Public Library, and Times Square just to name a few. The game does everything possible to make you feel like not only a part of the crew, but part of the movies. This is where Akroyd and Ramis bring this game to life. Just like the movies, the game is overflowing with Dan Akyroyd and his goofy technobabble, Bill Murry’s ever-present comedic sarcasm, and Harold Ramis doing his straight man Egon routine. Winston brings his man-from-the-street wisdom, Annie Potts is as New York snark as ever, and yes…William Atherton still has no dick. The writing in this game was fresh and funny when it was released, and just like the movies, it holds up today. Here’s a look at the second 45 minutes of the game, including a battle with a big fluffy familiar foe:

As I’m playing the PC version of the game, there are a wealth of options beyond just resolution improvements available. Without the original memory and processing power constraints of the Xbox 360 or PlayStation 3 to contend with, you can ratchet the resolution to 4k, push the framerate to 60fps and lock it (or 30 if you can’t muster 60), and turn on a half dozen other options to plane the rough edges off of any sharper edged polygons. This ties nicely into the remaster, but it’s not all sunshine and roses.

While everything in-engine has gotten a fresh coat of paint, the team opted to keep the original cutscenes. This creates a bit of a graphical delta between those older story beats and the fresh new look. Taking a trip into my closet to dig out my Xbox 360 copy, the first thing I noticed was just how much of an improvement this remaster has really brought to the table. The Xbox 360 version looked like it had a thick coat of vaseline on the lense by comparison, and all of the shadows on the older version were geometric blobs. In this remastered edition, plants now cast proper shadows, every texture is sharply rendered, and the proton pack has never looked better. Similarly, the lighting feels like the team at Saber ripped everything out and rebuilt it from the ground up. The protonic streams cast ribbons of light, burning everything in their path as the overhead chandeliers cast shadows underneath. It’s not a full Call of Duty Modern Warfare level of remaster, but what’s here is a pretty fantastic port.There are a few hiccups with gameplay courtesy of an AI that tends to get knocked down fairly frequently, or gets trapped behind broken objects from the environment. It makes for a few reload-to-checkpoint moments as the whole team can get wiped out in a matter of moments, leaving you on your own to fight an onslaught of beasties balanced for having multiple Ghostbusters in the field. It’s not terrible, and thankfully the checkpoints are frequent enough, but with unskippable cutscene moments it can cause some eye rolling. 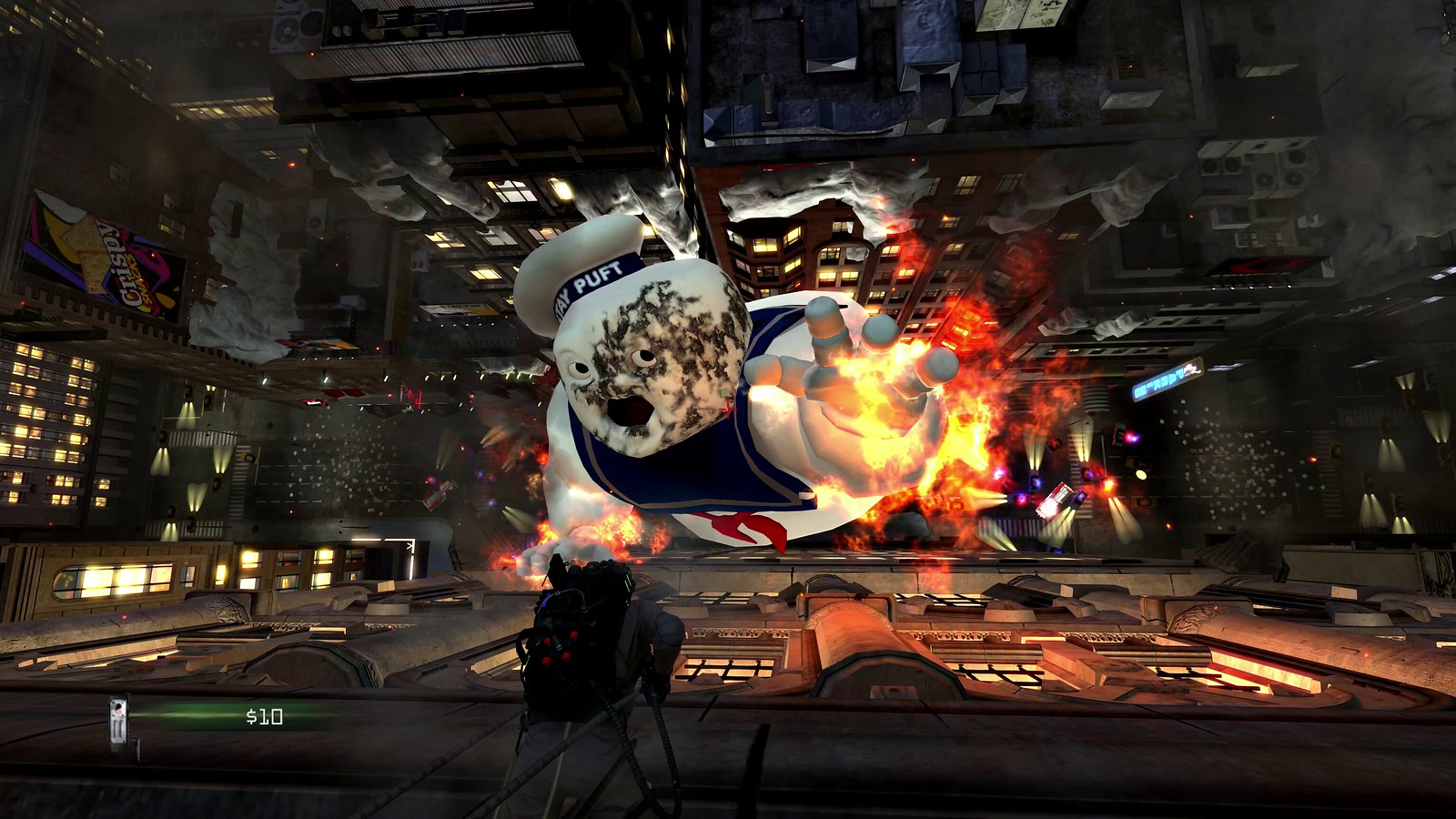 When this game was originally released in 2009, there was a multiplayer game that took place outside of the story-based campaign. This mission let up to four people team up and capture ghosts with each level being capped off by a boss battle. While I didn’t expect that Saber would rip the game apart and suddenly make the campaign multiplayer, I also didn’t expect that they’d cut this cool side feature. Thankfully, they have promised that they will be revamping it and adding it back in, though they were cool on details or timelines.

One of the things I appreciate most is that Ghostbusters The Game Remastered is priced at a very attractive price point — $29.99. This feels like a good point to reward Saber for their hard work to bring the game into the present, while not raking consumers over the coals.

With a fresh coat of paint, higher resolution, and sharper textures, Ghostbusters: The Game Remastered brings the unofficial Ghostbusters 3 script to life for a whole new audience. While the multiplayer mode is still AWOL, Saber Interactive promises we’ll see that pop out of a ghost trap in the near future. In the meantime, there’s a fantastic swan song for the original Ghostbusters team.

Ron Burke is the Editor in Chief for Gaming Trend. Currently living in Fort Worth, Texas, Ron is an old-school gamer who enjoys CRPGs, action/adventure, platformers, music games, and has recently gotten into tabletop gaming. Ron is also a fourth degree black belt, with a Master's rank in Matsumura Seito Shōrin-ryū, Moo Duk Kwan Tang Soo Do, Universal Tang Soo Do Alliance, and International Tang Soo Do Federation. He also holds ranks in several other styles in his search to be a well-rounded fighter. Ron has been married to Gaming Trend Editor, Laura Burke, for 21 years. They have three dogs - Pazuzu (Irish Terrier), Atë, and Calliope (both Australian Kelpie/Pit Bull mixes).
Related Articles: Ghostbusters The Game Remastered, Let's Play
Share
Tweet
Share
Submit