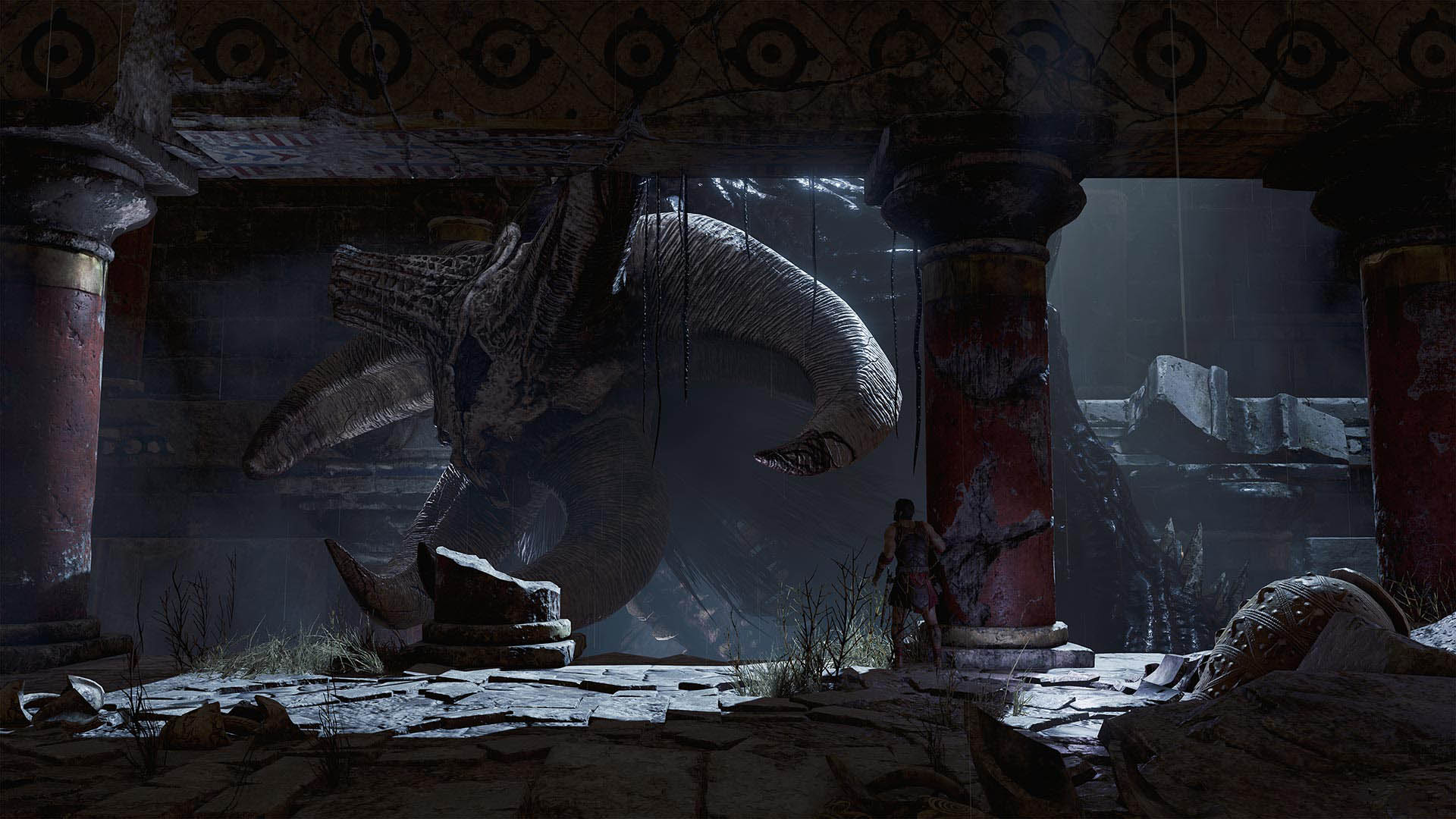 Greek mythology has always been fascinating to me, so when I first heard about the PSVR game Theseus, I was hopeful that I would get to trudge through the labyrinth, chop off the Minotaur’s head, and become a legend. While I didn’t quite get the experience I was expecting, I got an original and interesting story that changed how I thought about VR games.

In Greek Mythology, the Minotaur is supposed to be a fearsome and terrifying monster that feeds on humans and is so dangerous that it had to be locked away in the Labyrinth. In Theseus, developer Forge Reply has given the Minotaur its due and created a monstrous creature which dwarfs Theseus and comes off as a huge threat whenever it’s on-screen. The Minotaur is made to be so powerful that if he sees you, it almost always means certain death, which adds a real level of suspense to the game. During one of the sections in which you have to sneak by the Minotaur, I legitimately screamed the first time I saw him coming for me. One time I blinked just as he came to get me and when I open my eyes again the Minotaur was staring straight at me while enveloping every inch of my sight. I was completely startled and I thought it was fantastic.

The other enemies in the game, however, fall far short of being imposing or powerful in any way. When you first run into the spider-like creatures that plague Theseus throughout the game, Forge Reply did a rather good job of making them threatening. You are forced down a dark hallway with only a torch to defend yourself as you are surrounded on all sides by the spawn of the minotaur. This truly feels like you are at a disadvantage and makes these creature quite horrifying. If these enemies never returned, this part would have been a stand out moment in a very good game, but they just kept coming back over and over again. Once you get past that particular hallway, the encounters with these creatures become dull and repetitive and never are able to recapture even a bit of the intimidation that they first had. Rather than being threatening or enjoyable, the only thing these fights seem able to do is waste the player’s time, and with such a short total length, feels like useless padding.

Deciding to go with a third-person perspective rather than the typical first-person we see in most VR games, makes the game come off as much more cinematic and created an experience for me that I had never had before. Prior to playing Theseus, I didn’t think that the third-person perspective really made sense for VR because of the platform being a primarily first-person vehicle, but what Forge Reply has created is so impactful and incredible to see that it has completely sold me on the style. When Theseus initially walked out and I got my first taste of this perspective in VR I was simply blown away by the beauty and power that came with being so close to a character. It was incredible and has me eagerly waiting to see what else could be done with this style of VR game.

The third-person perspective, while amazing, does create Theseus’ biggest problem, by giving Forge Reply the option to move the camera to other fixed points. When the game is at the standard over the shoulder third-person perspective, it looks and feels incredible, but the camera barely ever stays at this spot and rather jumps back and forth from fixed spots. While fixed positions make sense for climbing sections, there was no reason for these angles while just walking down a different hallway as it does nothing but make the game look less impressive and cause confusion. When the game does switch back to third-person, the change feels extremely jarring and I would usually need a second to refocus my eyes and understand what I was seeing, which turned possibly the best aspect of the game into something that is unpleasant every time it happens.

Theseus’ story is the game’s shining star and makes its extremely short playtime of about two hours feel perfect because it delivers the exact right amount of narrative to make you feel like you experienced a full and complete story. Forge Reply has reimagined the story of Theseus and the Minotaur without sacrificing any of its main pillars and even found a way to work in checkpoints and death in a way that makes sense and fits into the story, which I really appreciated. When I realized that the story was going to be completely different to the one I knew, I was a little disappointed, but Forge Reply’s version is so interesting and well presented that I couldn’t help but be sucked into its dark and twisted tale.

While Theseus would play just as well in a non-VR setup, the game would lose a lot in terms of its feel and cinematic presence. Looking over Theseus shoulder is a unique experience that I haven’t seen anywhere else in VR. While I have played many third-person games without a headset, you can’t get the same level of intimacy with a game world and character in a non-VR game as you do when everything around you is the game. If Theseus wasn’t in VR, it wouldn’t be anything special, so the decision by Forge Reply to go in this direction was an excellent one because it makes Theseus stand out as one of the best games on PSVR.

Theseus is a very entertaining and interesting VR game. The use of the third-person perspective in VR elevates the game and creates a fulfilling and unique experience. While the combat can be lackluster and constant camera changes feel unnecessary and bothersome, the narrative holds it together and makes Theseus better than many other PSVR titles.

Zach has been a gamer ever since he picked up a PS1 controller and played Asteroids for the first time. From FPS games to Point-and-click adventures, Zach knows no genre that he can't get into. When not playing games, he spends his time looking at the newest computer components on the market and dreaming of a day when he can buy them.
Related Articles: Theseus, VR
Share
Tweet
Share
Submit