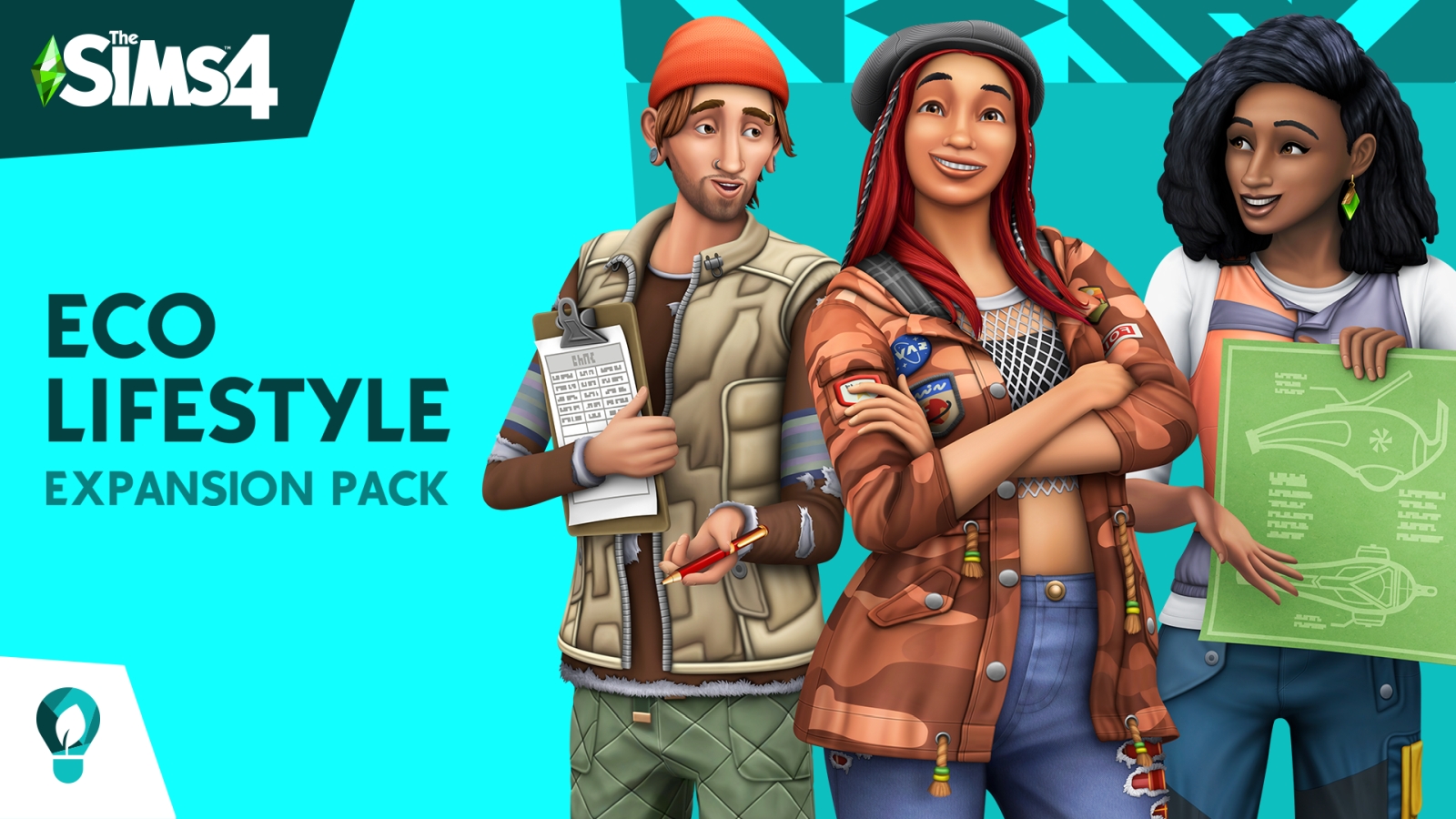 The Sims 4 Eco Lifestyle expansion pack dropped earlier this month, and with it came a whole new way of living. This expansion focuses on recycling, cleaning up your neighborhood, upcycling items to build new ones, and bringing your community together to vote on Neighborhood Action Plans (or NAPs). It’s chock full of new items, hairstyles, traits, clothing and more!

A lot of the things in Eco Lifestyle revolve around the new Maker profession. There is an aspiration involved with this called Master Maker, where your sim strives to become an expert at Fabrication. As a Maker, you constantly want to make new things, be it candles with the candle making station, juice with the new juice fizzing station, or making new things from recycled bits and pieces with the fabricator machine.

I decided to make a new Sim for this world, a pink haired beauty named Evelyn Devlin. There are some really nice new hairstyles with this expansion, and though I was not personally thrilled with the clothing options, there are a lot of new items that go perfectly with the eco-theme. I ended up taking Master Maker as her aspiration, with Muser, Maker, Recycle Disciple, and Green Fiend as her traits. I have never played with CC (otherwise known as custom content), but I did use the Motherlode cheat to kickstart things. I bought Evelyn a fabricator so she could get to work on her aspiration right away, and upgraded all the items in her house to be eco-friendly. This will not only lower your bills, but lowers the eco-footprint of your neighborhood. When you first land in Evergreen Harbor, you can choose from three neighborhoods. All of them are in a horrendous state, with garbage littering the streets, pollution, and very little landscaping, as seen in the pics below. 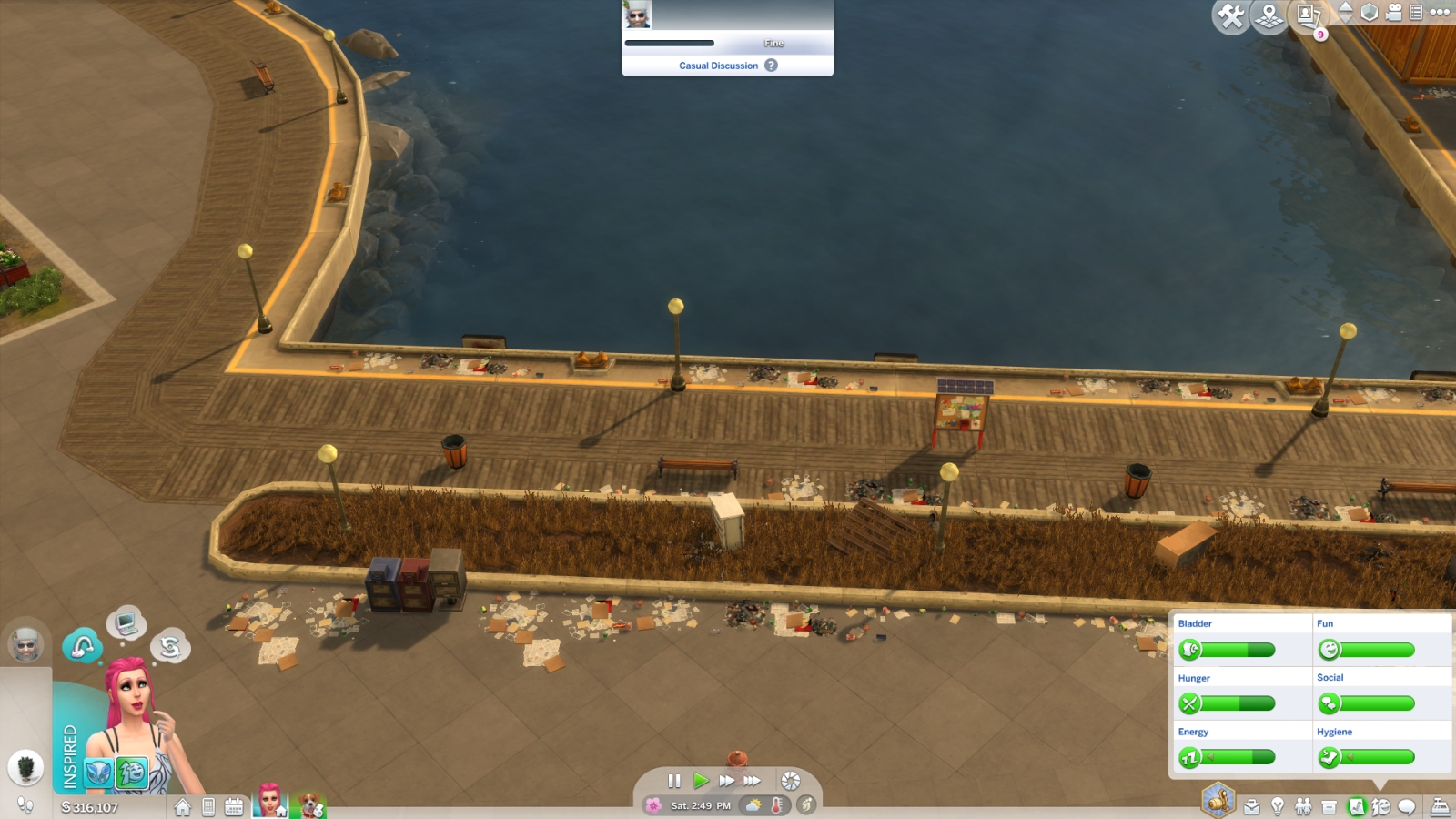 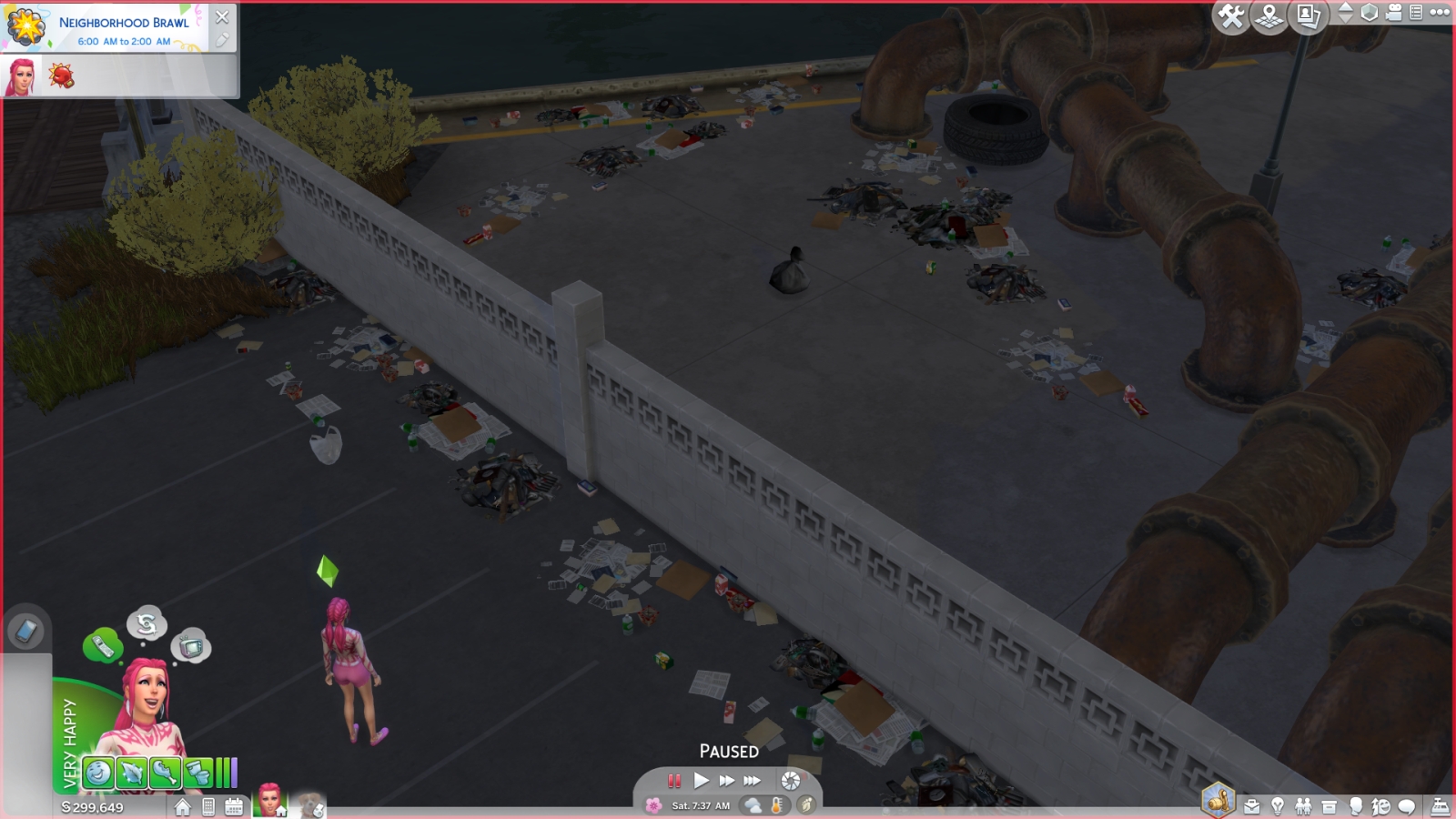 The point of Eco Lifestyle is that you make a difference over time with your eco-footprint, and voting in NAPs. I won’t lie, the map is depressing when you first start, but after just a little bit of time you’ll see things clean up, if that is the direction you want to take things in. Some people may want to create a polluted neighborhood, and the beauty of The Sims is that you can play it however you like. As Evelyn got started recycling things in the recycler, which is how you get your bits and pieces for the fabricator, I continued to set up her house to be as eco-friendly as possible. You can install wind turbines and solar panels to both your roof and yard, as well as a dew collector to help reduce water usage. You can also use the repair skill line to upgrade your appliances and plumbing within your home to use less power and resources. I also added in some of the new vertical garden planters.

After walking around the three neighborhoods and meeting my new neighbors, I decided to search for some dumpsters to dive in. This is also a new feature which, supposedly, can be very helpful for a Maker. While I have not personally found anything worthwhile in the dumpsters, I have read of Sims coming out with some amazing finds. In my experience, it was more hassle than it was worth, and I ended up just recycling items I made to get more bits and pieces for the fabricator. If woo-hooing in a dumpster is your thing, you now have the ability to do so, but beware because if you are seen dumpster diving or woo-hooing you’ll be publicly shamed if you’re pursuing the celebrity path. Fortunately I was never caught dumpster diving, and obtained several bits and pieces for my fabricator with no shameful looks.

The fabricator itself will make a lot of home furnishing items. Chairs, lamps, dressers and the like. One thing I’d love to see is the ability to queue up more than one creation at a time. It takes a long time to make one item at the fabricator, and the machine also seems to break a lot. It takes a long time, and a lot of patience to level up as a Maker. Before long I added in a candle making station to help speed things up. You’ll need this to progress your aspiration along, and while it was slightly more fun than fabrication, it also takes a long time to make a single candle. Once you level up your skill you can start to make some pretty carved candle creations, but they don’t stay lit long and only have a single use. 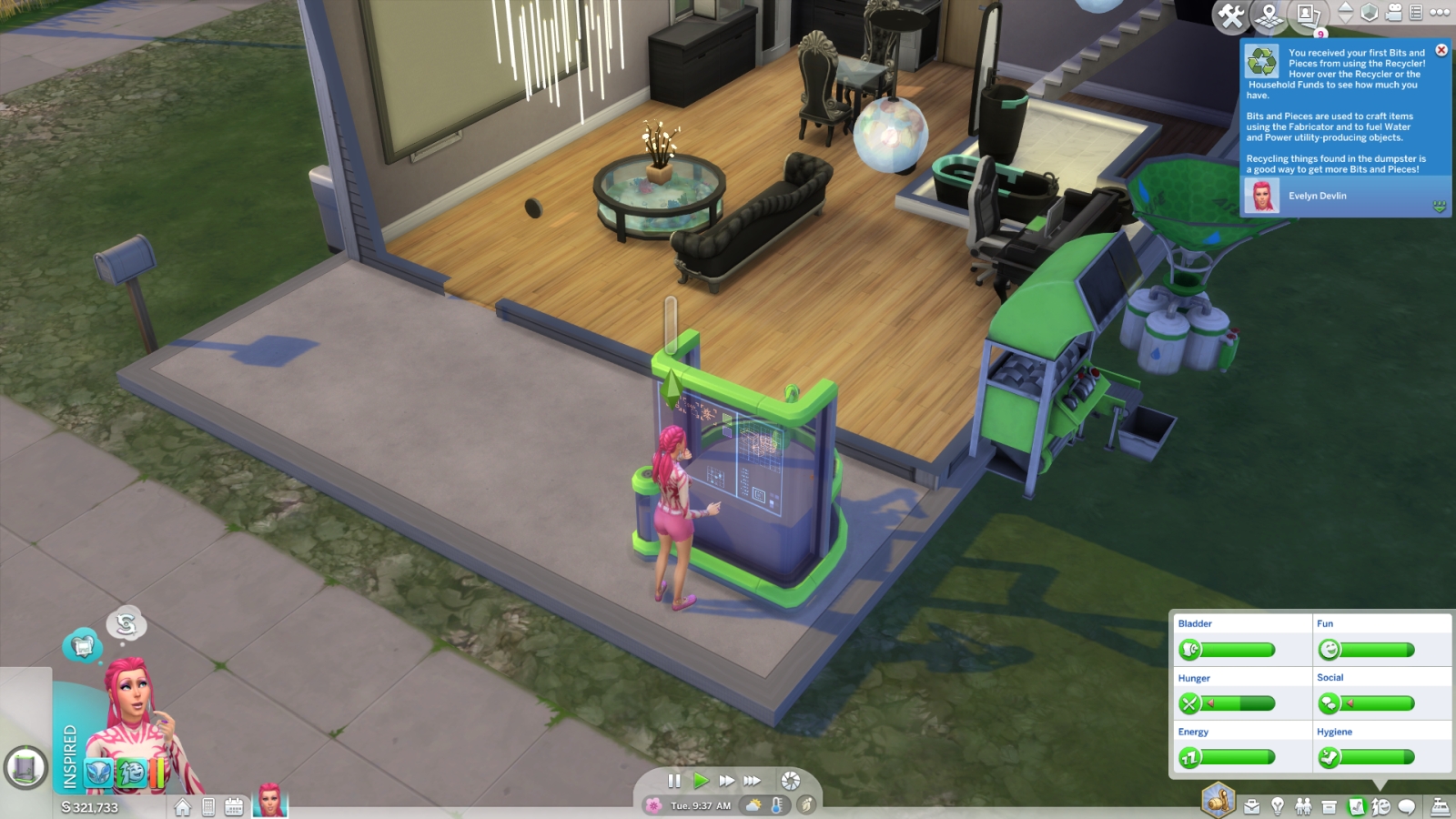 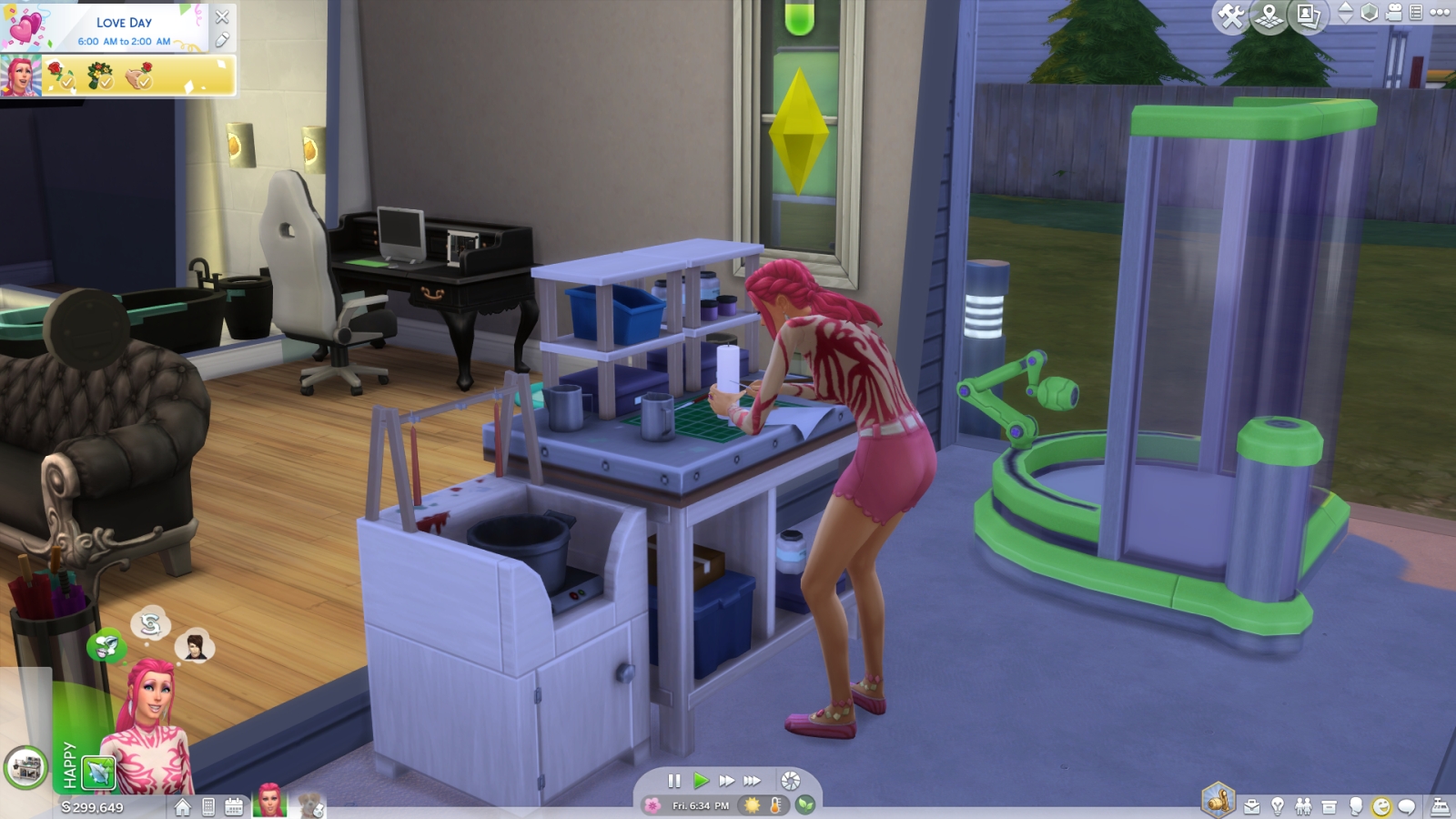 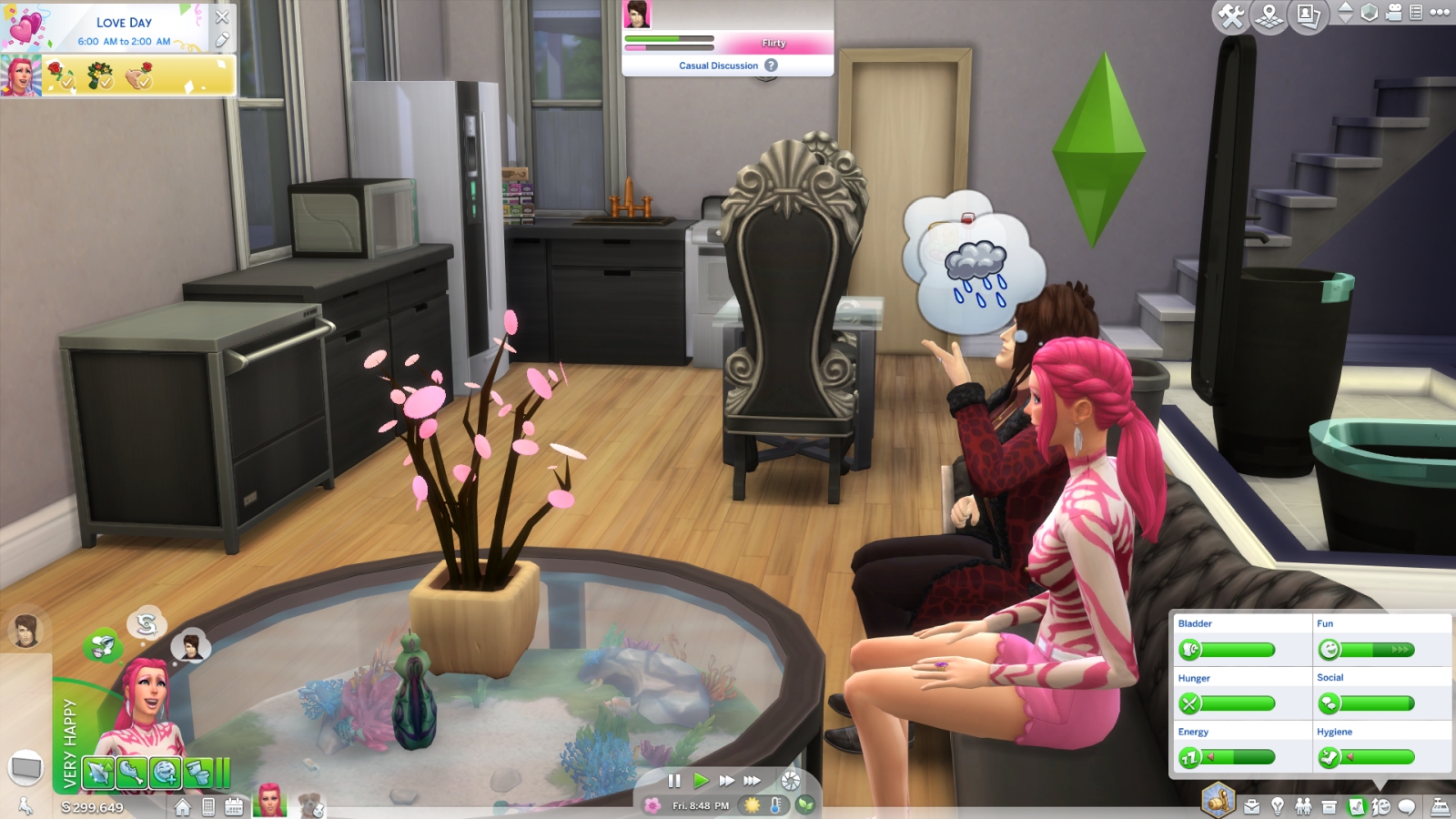 Along with the other new skills, I started messing around with juice fizzing. Consuming different juices will affect your Sims’ mood, and what eco-friendly hipster wouldn’t be complete without their kombucha, which you can also make at the fizz station. There is a plasma fruit juice that can be made for vampires, and while I think the fizz station is fun, it just didn’t seem to be overly useful because you can already alter moods much faster in different ways from other expansions. On the topic of vampires, pollution will have a negative effect on vampires.

Before long, it was time to vote on my first NAP. Voting opens up every Friday at 8am and closes on Sunday at 6pm. If you are confused, like I was, you can vote via the big community signs that are found on the community lots in all three neighborhoods, or via your mailbox (which is much easier). There is an influence point system, and you earn points quickly just by doing your everyday things within the game. Something to note, you can’t vote outside your own neighborhood, so the other two neighborhoods on the Evergreen Harbor map will probably look terrible unless you move over and start working there after you finish with your plans for your current neighborhood. I personally never had any issues getting the action plan I wanted in place; the influence points came easy and I just dumped all mine into the plan I wanted, and it got passed without fail. 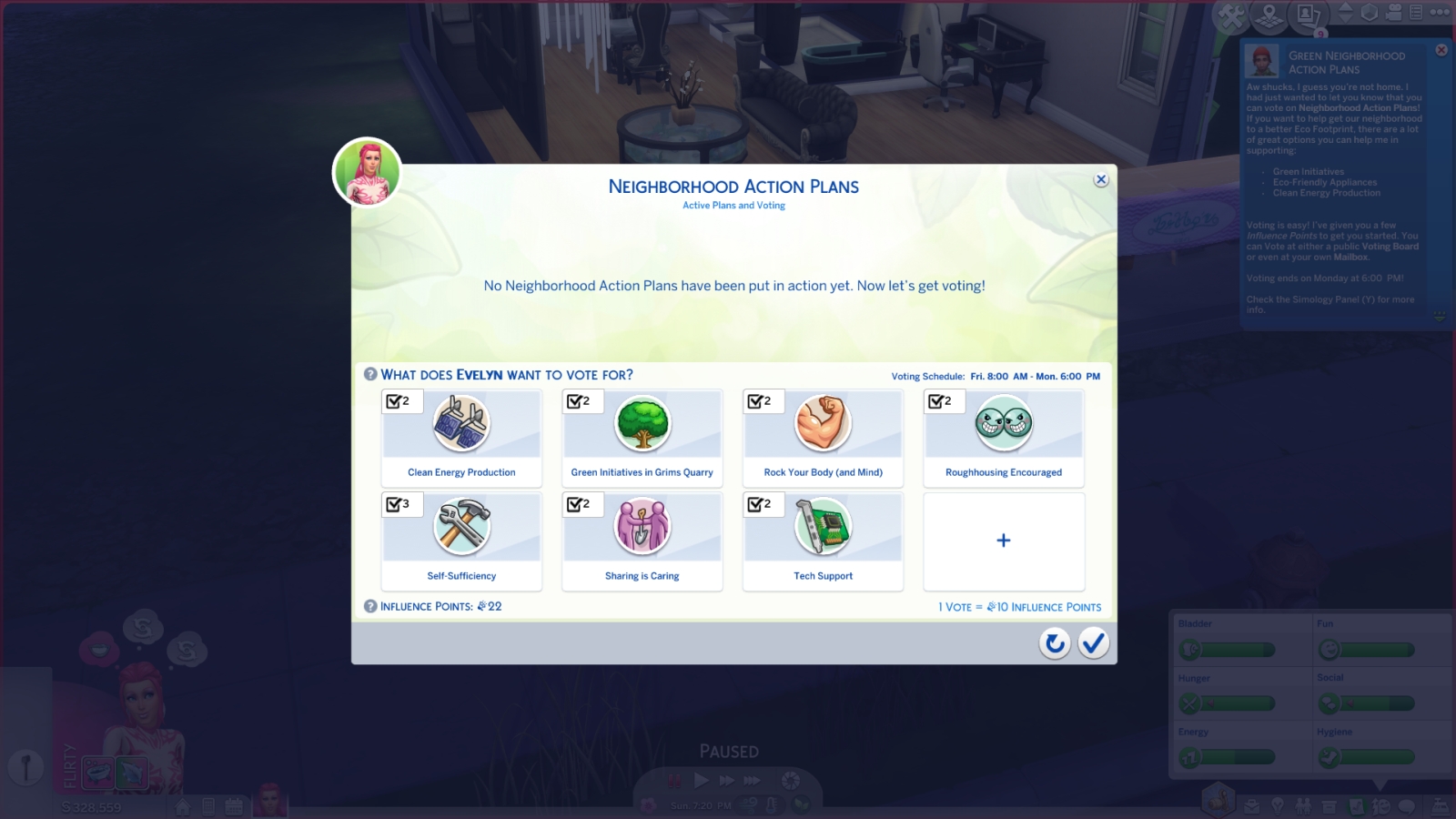 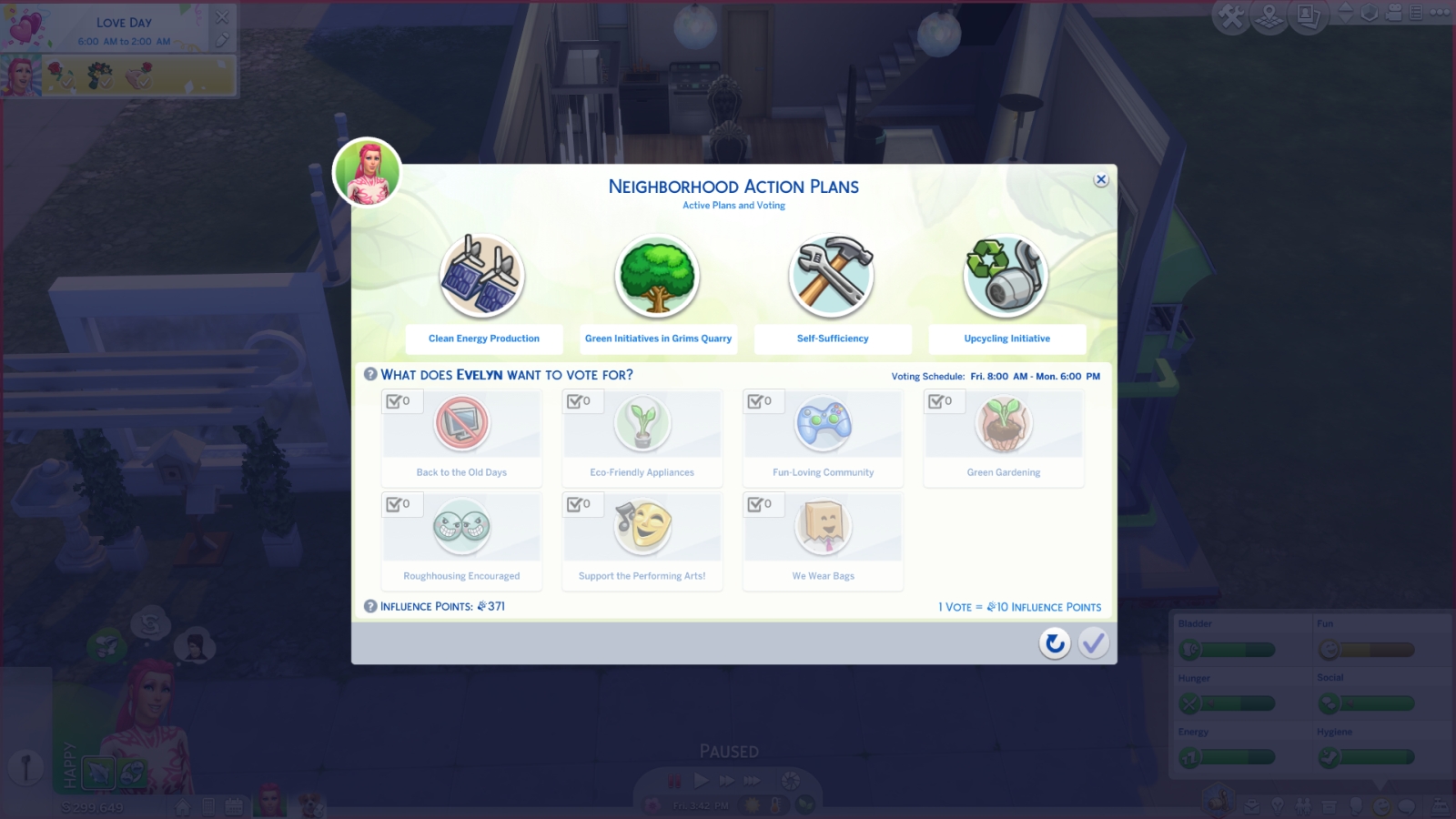 So far I have voted in Clean Energy Production, Green Initiatives in Grim Quarry, Self Sufficiency, and Upcycling Initiative. My main goal was to get the depressing trash off the streets, and Green Initiatives helped with that. So far, with these NAPs in place, my neighborhood is clean, with trees and flowers everywhere. Another neat perk is that once you have cleaned things up you can see the aurora borealis at night, and sun rays during the day. There are also negative NAPs, such as ‘Roughhousing Encouraged’ where everyone fights on the streets, and ‘We Wear Bags’ where everyone has a brown paper bag on their head. The NAPs are really a choose your own adventure type thing. Something else to note, if you’re trying to become a celebrity, you will get fame points for voting in a NAP. 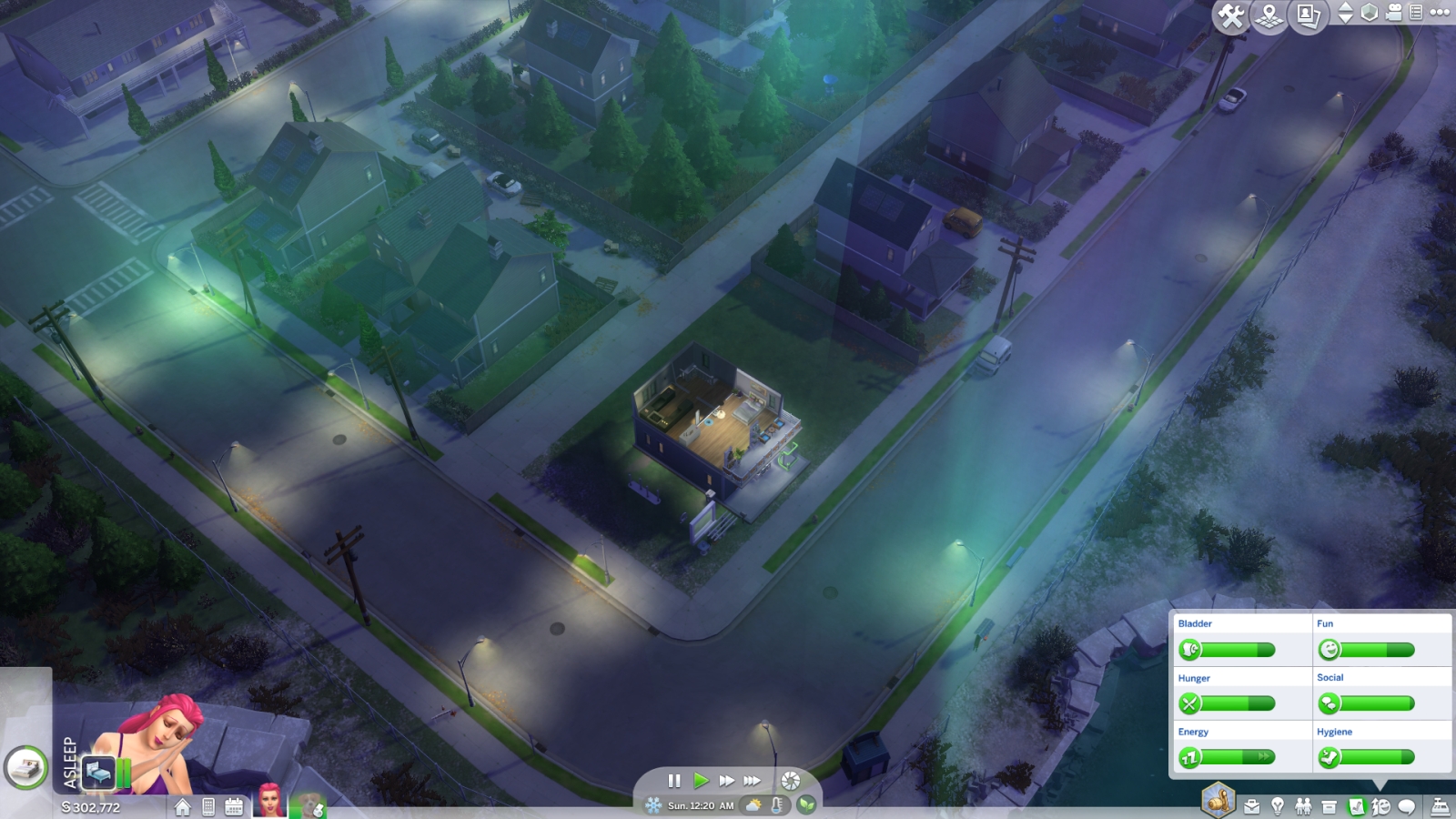 Hard work pays off, in Eco Lifestyle a clean environment produces a lovely aurora borealis at night, and sun rays during the day!

One small but satisfying thing that I know a lot of Sims 4 players have been asking for was added with Eco Lifestyle, and that is the ability to move windows! You can also place items right over a window now. And while I didn’t care too much for the clothing that came with this expansion, the home furnishings are very nice. I look forward to remodeling my home in my main saved game with some of the new items.

I have been playing The Sims since day 1, and while I have loved all of the games and expansions in their own way, some I like more than others. Everyone has their own likes and dislikes, and while Eco Lifestyle wasn’t a huge hit for me, I still enjoyed it for the most part. As I have mentioned before in previous reviews, I generally gravitate to celebrity, magic and nightlife content more, but there were some satisfying items in this pack as well. The Sims 4 Eco Lifestyle is currently retailing for $39.99.

Overall, Eco Lifestyle has been an average experience, though to be fair I am not overly interested in the concepts presented in the expansion. In general I have a lot more fun in packs with nightlife, celebrity, magic, and supernatural concepts, and it has been that way for me throughout all of The Sims games. It is pretty neat that your actions have an impact on the map and you see changes, be it negative or positive, but I personally didn’t feel the need to do anything else once I had my neighborhood cleaned up. Evergreen Harbor itself isn’t a very interesting map to live on, and I don’t see myself continuing on with the Sim or game I started on it.

Holly Hudspeth is a best-selling author living in Fort Worth, Texas. She has six published books to date; The Skyy Huntington Series, which is an epic dark fantasy adventure, and One Small Detail, a stand-alone medieval fantasy. Holly also enjoys writing fan fiction based on her avatars from games such as EverQuest and World of Warcraft. Her first major purchase at the established age of nine was the NES, and she has been gaming ever since. You can find her leading raids two nights a week in World of Warcraft, goofing off with friends in Overwatch, or playing League of Legends with her husband. She enjoys fantasy games, RPGs, and MMOs.
Related Articles: The Sims 4 Eco Lifestyle
Share
Tweet
Share
Submit