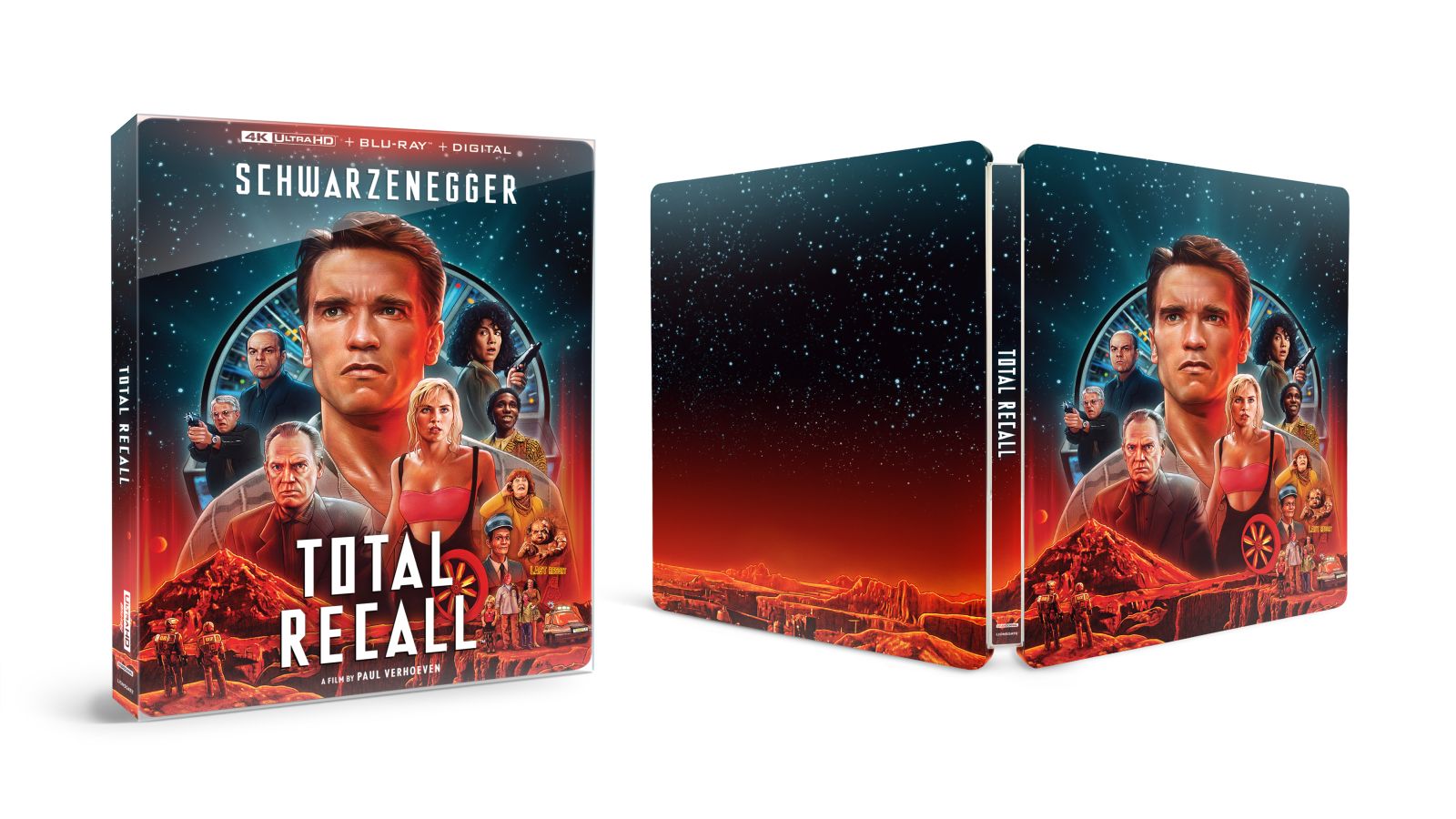 It’s hard to believe that it’s been 30 years since the release of the Paul Verhoeven fever dream that is Total Recall, but here we are. Adapted from the short story from Philip K. Dick (“We Can Remember It For You Wholesale”), Total Recall tells the story of a disaffected construction worker named Douglass Quaid who decides that his dull life could use a punch. He visits a place called Recall Incorporated that can give you the experience of a complete vacation as memories, implanted into your mind, without ever leaving home. “For the memory of a lifetime” indeed. Total Recall is easily one of Arnold Schwarzenegger’s best films, running alongside his earlier 80’s hits like Terminator 2, The Predator, and The Running Man.

From the opening scenes bathed in deep reds on the surface of Mars, it’s immediately apparent that the team at Studiocanal have put a lot of love into this 4K remaster. Digging deep into the archives, the film sports the original aspect ratio of 1:85:1 and is provided here with gorgeous HDR10, Dolby Vision, and Wide Color Gamut (WCG). If none of that makes any sense to you, suffice it to say the film has never looked this good — not even when it was released in theaters in 1990. Early 4K masters from other production companies were a little shaky, but it’s clear that Studiocanal has got this figured out. 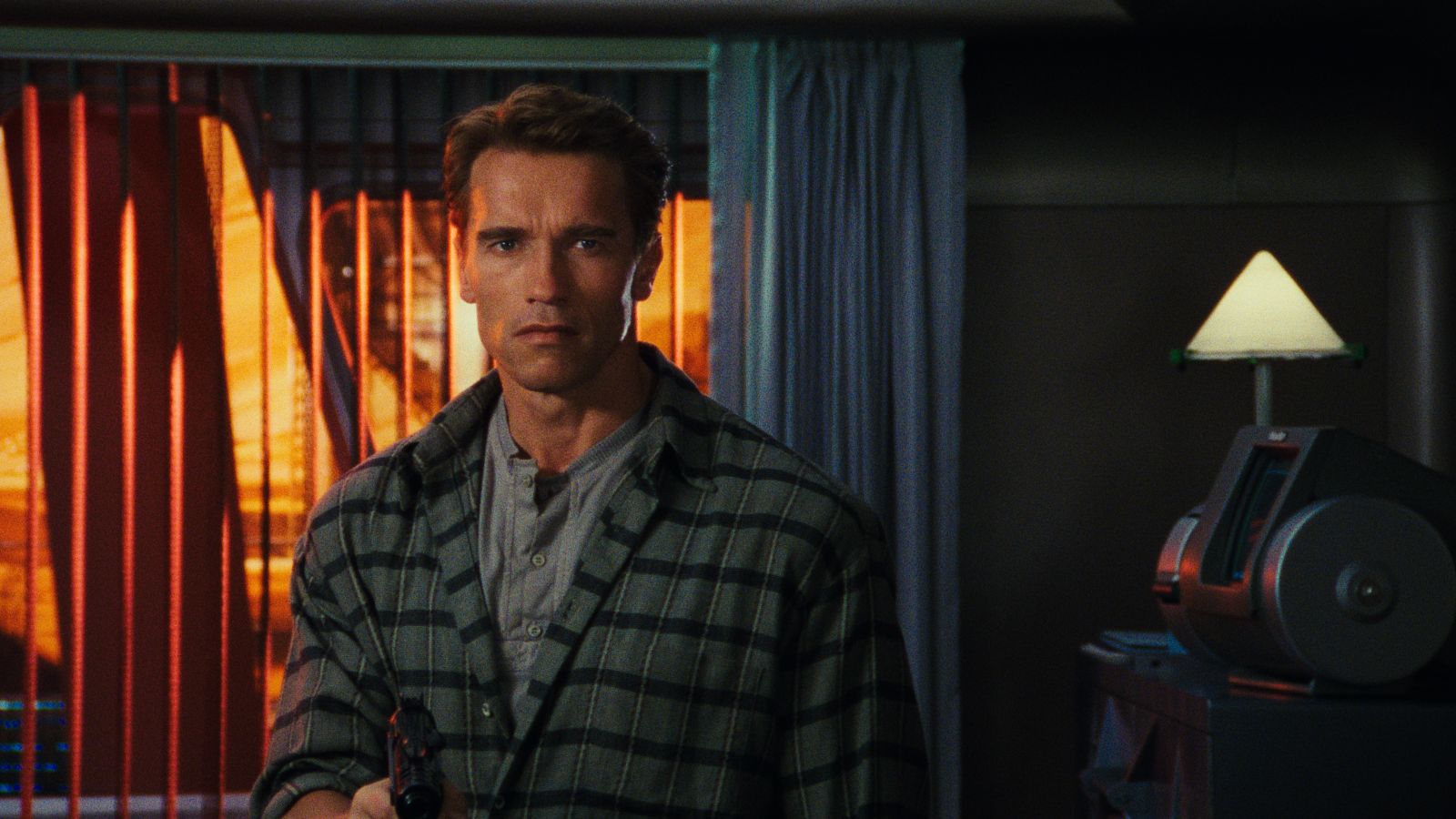 Arnie as Quaid from the film

Verhoeven’s style shines through, shooting chase scenes from underneath the actor’s face to emphasize speed, having the camera go down adjacent stairs while the character runs up to create height, and more blood squibs than you can count, pushing the ultraviolence and copious amounts of blood the man is known for. A poor schlub catches a dozen bullets in the chest, and then his fellow henchmen literally step on him in pursuit of Quaid. It’s glorious.

There are a few standout moments where you’ll get a reminder that the team is working with 30 year old technology, such as the odd bluescreen moments where characters stick out among painted-in backgrounds. There are some red-bleed screens where the color coming from the windows causes oversaturation on character skin tones, but when the transfer looks this good everywhere else, it’s easy to overlook.

Being partially deaf means I have specific high tones that are hard for me to hear. As such, when a movie has a poor audio it sticks out in the form of muted center channel audio, making it hard for me to enjoy. I’m happy to report that the audio mix in this movie is magnificent. The late Roy Brocksmith’s nasally tone comes through perfectly as Dr. Edgemar, Michael Ironside’s gravelly voice chews through every scene, Arnold’s persistent grunting and…whatever this is, mix beautifully with Jerry Goldsmith’s frantic music score, taking full advantage of Dolby Atmos if you have the hardware for it.

The struggle with 4K movies is that while practical effects look amazing, scenes like the mask-removal scene are less so. Still, it fits with Verhoeven’s schtick approach to his films, and a good laugh is as appropriate there as when Thumbelina takes to the bar with an uzi. 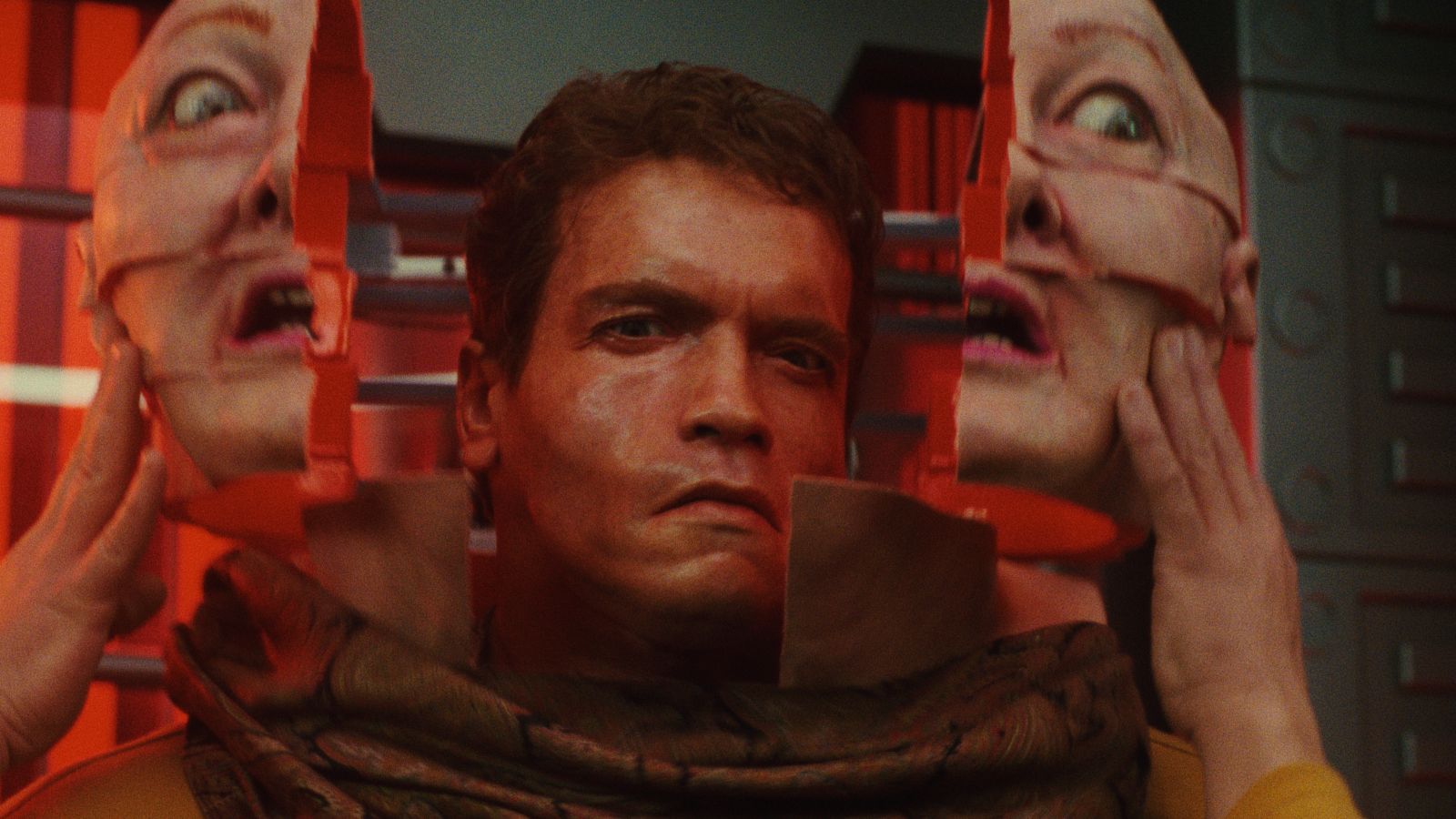 Yep. This is still a thing.

If you are a fan of Verhoeven flicks, and you enjoyed Starship Troopers, then you’ll recognize plenty of the same actors that he’ll use seven years later in that film present and accounted for here in Total Recall. Watching this film my wife and I couldn’t help but repeatedly point out “hey, I know that guy!” throughout the entire film. It’s a fun trip down memory lane.

Beyond the film there are a number of extras to enjoy. The first is a fantastic commentary with Verhoeven and Schwarzenegger talking about the process behind the scenes, as well as their bizarre alternate ending involving clones and other crazy deus ex machina.

The second extra on the first disc is Total Excess: How Carolco Changed Hollywood — an hour long documentary talking about the rise and fall of a legendary production house founded by Andrew G. Vagna and Mario Kassar – the team behind movies like Terminator 2, Rambo, Basic Instinct, Angel Heart, Stargate, Universal Soldier, and of course, Total Recall. There’s thankfully a lot of meat on this bone, giving me a ton of inside information I’d never heard of before. For example, did you know that a young James Cameron wrote the script for Rambo First Blood Part II? How about the fact that Cliffhanger’s antagonist was meant to be David Bowie? Yeah, me neither. So often the addons for movies are more advertising than anything else, but this piece is absolutely worth a watch. 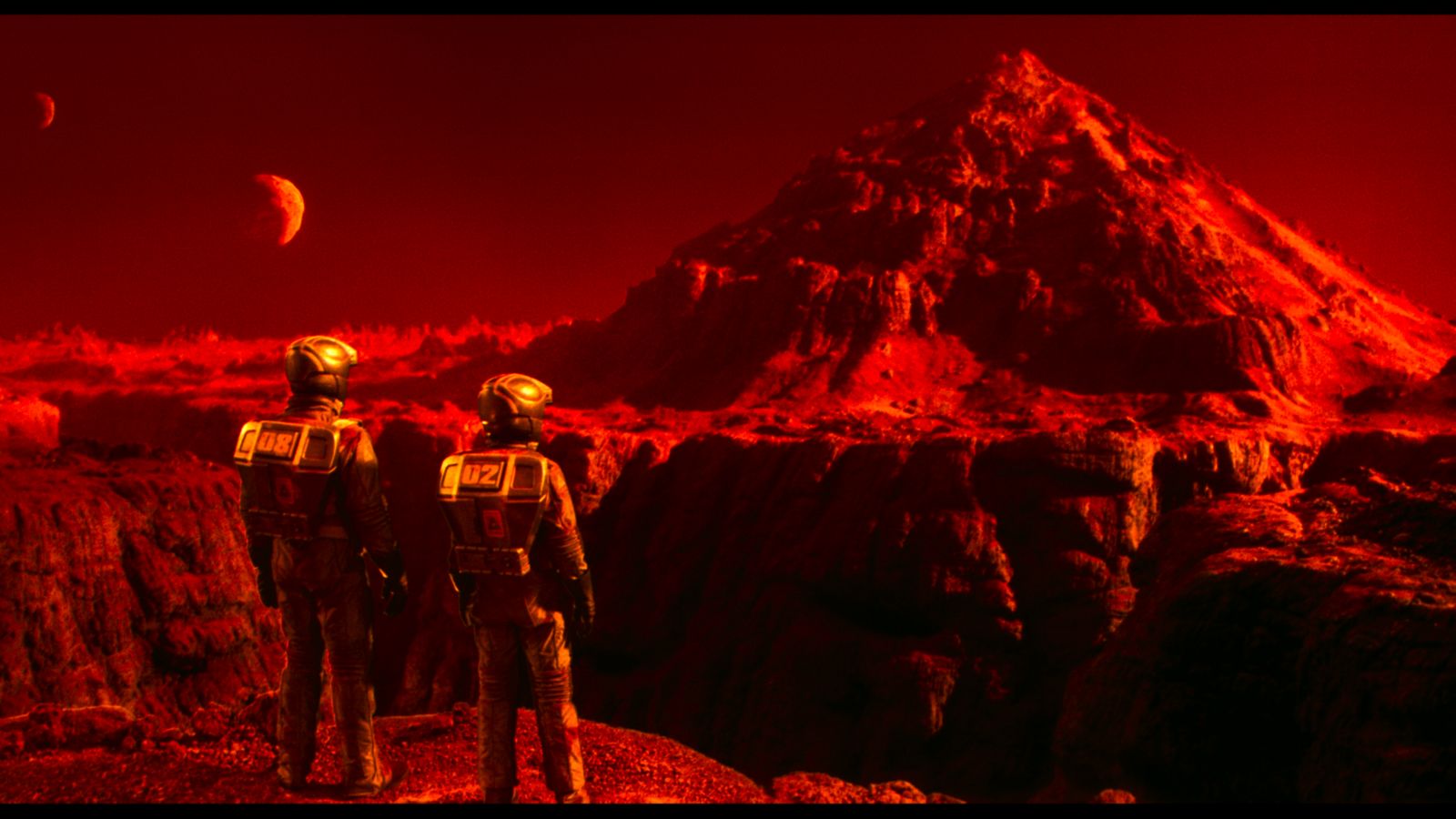 There’s a tiny bit of red bleed in scenes like this.

Next up is Open Your Mind: Scoring Total Recall about the music behind the film. If you really enjoyed Jerry Goldsmith’s work on the film, you’ll get a peek behind the curtain with this segment.

The last documentary on the first disk is entitled Dreamers Within the Dream: Developing Total Recall which at 8 and a half minutes, amounts to a quick look at how a movie goes from concept art combined with a spec script and turning them into pre-visualization pieces that ultimately turn into a film. Artist Ron Miller also gives us a little insight into how the script changed from a “milquetoast”” type main character to the big beefy Arnold Schwarzenegger, as well as how they brought the concept of the Martian city to life. These sorts of concept art bits are an awesome look behind the process, and at less than the time it takes to make buttered popcorn, it’s worth the time investment.

The version I’m reviewing is the 3 disk edition of the film. There is a 5 disc collector’s edition with a whole bunch of swag, but you’ll have to look elsewhere for the details on that one. On the second disc are some additional special features including Total Recall: The Special Effects, a 23 minute long look at the project from Stetson Visual Effects and Dream Quest Images that teamed up for the miniatures and effects work on the film. Since so many of the VFX were practical, that means building a lot of interiors and models that had to be built at scale to make it all look realistic in an age before slick CGI.

The “Making of” piece clocks in at just 8 minutes and serves as more of a promo piece for Recall, shot through a bizarre fisheye lens and narrated again by Roy Brocksmith. It then shifts to a Carolco one-sheet reel that explains the primary beats of the storyline, as well as some behind-the-scenes looks at Verhoeven directing the piece. 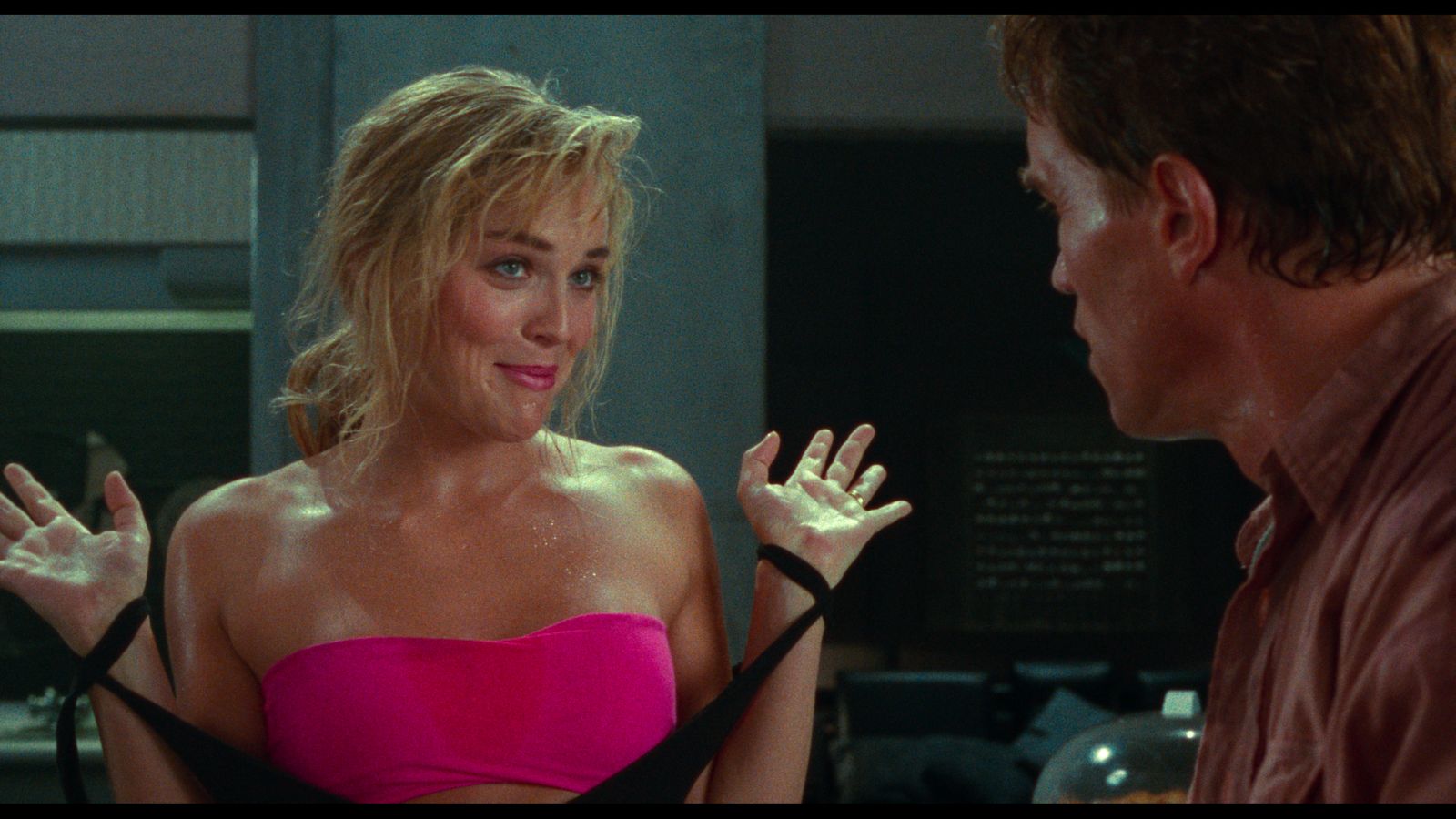 The last item on the disc is a 30 minute “Imagining Total Recall” featurette that shows how Ron Shusett and Dan O’Bannon turned Dick’s 23-page short story into what ultimately came together as Total Recall. It serves as more of a “Making Of” than the featurette of the same name. It has nuggets like Patrick Swayze being the original lead under a previous director. This movie has had a wild ride from script to screen.

The third disc in the package is the standard BluRay version of the film, which has the same features as the 4K version, minus the trailer for some reason.

In the end, Total Recall’s ultraviolence and campy fun gets all new life thanks to an amazing transfer, super-clean audio, and some of the best color correction we’ve seen in a film remaster to date. If you are a fan of Verhoven’s campy brand of sci fi, you’ll be happy to have this one in your collection. While we contemplate whether all of this was an implanted Rekall memory or not, all I know for sure is that the future sure has a lot of steam vents, and Johnny Cabs are going to kill us all.

Total Recall is available in 4K on Amazon by the time you read this review.

With an excellent 4K remaster, Total Recall’s 4K release is a visual and auditory feast. This package has excellent behind-the-scenes featurettes that show how this impossible script went from rejected concept in bankruptcy to smash hit. If you are a Verhoven fan, this is a must-have return to the best parts of 90s action.

Ron Burke is the Editor in Chief for Gaming Trend. Currently living in Fort Worth, Texas, Ron is an old-school gamer who enjoys CRPGs, action/adventure, platformers, music games, and has recently gotten into tabletop gaming. Ron is also a fourth degree black belt, with a Master's rank in Matsumura Seito Shōrin-ryū, Moo Duk Kwan Tang Soo Do, Universal Tang Soo Do Alliance, and International Tang Soo Do Federation. He also holds ranks in several other styles in his search to be a well-rounded fighter. Ron has been married to Gaming Trend Editor, Laura Burke, for 21 years. They have three dogs - Pazuzu (Irish Terrier), Atë, and Calliope (both Australian Kelpie/Pit Bull mixes).
Related Articles: Total Recall
Share
Tweet
Share
Submit