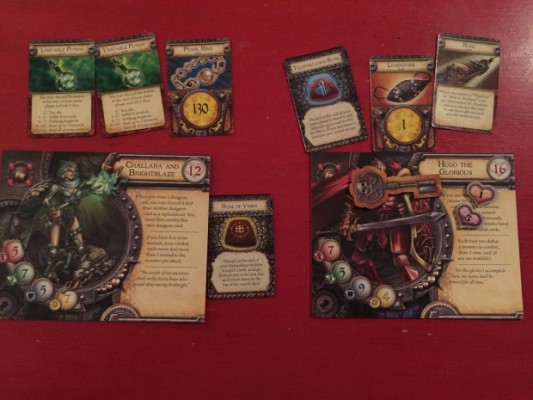 Sometimes you want to defeat monsters with a group of friends, but other times you just want to go in for the gold and the glory. Shared victories and great, but winning by yourself and laughing in your competitors’ faces can be its own reward. If this sounds a lot like Munchkin, then you’d be wrong. DungeonQuest Revised Edition is here to quench your treasure hoarding needs.

DungeonQuest is a game for up to four players with each playing one of six different adventurers. Each starts in a corner of the board representing Dragonfire Dungeon. After checking for any abilities effective on the start of their turn, they can either move or search for items. As players explore, tiles get laid down that represent the labyrinth before them. Squares already with tiles are explored and can be searched if it has not been searched before, unoccupied by monsters, and has a torch icon on it. Searching results in treasure and items that can be used to assist your journey.

If a character moves into an occupied space, a chamber tile is laid down into that spot. Then the player moves their character into that spot and resolves any effects for that chamber. Most locations have you draw a card for that kind of location, like a dungeon card or trap card. Some areas have you test a skill with different results whether you succeed or fail. Dragonfire Dungeon is a harsh mistress, because it lures you with the promise of treasure, but one wrong move can kill you instantly.

Some locations allow you to explore the catacombs, an area below the board with no maze. You may be forced to explore in this no man’s land. When in the catacombs, an arrowed marker is placed on the entrance square and the character’s figure is taken off the board to remind the player that they are searching underground. The next turn the player takes a catacomb card and follows it. Once an “Exit the catacombs” card appears, the player can exit by moving the marker the same number of squares as catacomb cards he went through before exiting. Then the marker is turned 90 degrees and a die is rolled. The marker is moved that number of spaces. The figure is then placed on the square and the marker is removed. The catacombs contain loot worth much gold, but you can get lost in there for a long time and possibly die with no one to retrieve your body.

Many encounters involve monsters, whether they draw a card that tell them to encounter a monster or there is a monster in the space that they move into. When in combat with a monster, the player to the left becomes the monster player. Both players get three combat cards representing melee, ranged, and magic attacks. Both players play one of their cards simultaneously, and charts on both cards give the number of wounds each take. The player can try to escape from the monster against their agility. If they escape, they take wounds equal to the penalty on the monster card. If he fails, or if the player declines trying to escape, they both go for another round until either the monster or hero dies. The fact that both players are using cards to determine combat instead of rolling dice at random to determine damage feels like you have some control over how much damage each participant takes.

Delving into Dragonfire Dungeon takes bravery, since the length of time the doors are open is unknown. At the beginning of the game a sun token is placed on the sun track. After every player has taken their turn, the first player moves the token one space down the track. Once the token enters the numbered spaces, the first player rolls a die and if the result is higher than or equal to the number the token is on, the sun sets, the chambers close, and only the songs of their former glory will be left of the adventurers trapped inside. This timer forces you to choose how often you search and how often you move, as the deeper you go in, the more turns it will take to move to the tower chamber. You don’t have to exit the same tower chamber as the one you enter with, but your current path may not connect to another tower chamber.

DungeonQuest is heavily card driven. Most times upon entering a new area a card is drawn by the player. Most of the time it will be dungeon or catacomb cards. However, that card might cause another card to be drawn. For instance, a dungeon card might tell you that the player encounters a dead body, so draw a corpse card. The corpse card then says that the player searches the body and finds a dusty bag at its side, so draw a treasure card. The treasure card then gives the player an item worth gold. In other cases, a cave in might cause the player to roll an agility check. Other times, the card flip may cause an instant death. Several decks of cards are included, some larger than others, but you aren’t going to go through the entire deck during a game very often, if at all.

As you have probably gathered from above, the game is driven by randomness. The tile drawn when a player moves to an unexplored space, the card drawn when entering an unexplored space, how many cards drawn and spaces moved in the catacombs, and dice rolls on attribute checks are all examples of randomness that permeates throughout the game. If you don’t like randomness, then you might want to avoid this game or else get frustrated.

The game comes with a manual on how to get started and jump into the game quickly. It’s easy to follow and explains most of the general concepts of the game. The other booklet is the rules reference, and most of the pages contain a glossary for the game. However, the rules reference has variants for solo play, allowing players who died to re-enter the dungeon as a different character, and laying down chambers next to each unexplored hall the character enters into. This makes it easier to avoid bottomless pits and other terrors trapped in the dungeon, but it takes away the tension of not knowing what challenges lie ahead.

I never had the opportunity to play the original DungeonQuest, which was originally released in 1985. I’m glad to see that Fantasy Flight has reprinted this game with a few tweaks so that it can reach a wider audience. It may be a bit too random for some, but if you want a light, competitive dungeon exploration game, don’t hesitate to put DungeonQuest Revised Edition into your collection.

While not working as a Database Administrator, Keith Schleicher has been associated with Gaming Trend since 2003. While his love of video games started with the Telestar Alpha (a pong console with four different games), he trule started playing video games when he received the ill-fated TI-99/4A. While the Speech Synthesizer seemed to be the height of gaming, eventually a 286 AT computer running at 8/12 Hz and a CGA monitor would be his outlet for a while. Eventually he’d graduate to 386, 486, Pentium, and Athlon systems, building some of those systems while doing some hardware reviews and attending Comdex. With the release of the Dreamcast that started his conversion to the console world. Since then he has acquired an NES, SNES, PS2, PS3, PSP, GBA-SP, DS, Xbox, Xbox 360, Xbox One S, Gamecube, Wii, Switch, and Oculus Quest 2. While not playing video games he enjoys bowling, reading, playing board games, listening to music, and watching movies and TV. He originally hails from Wisconsin but is now living in Michigan with his wife and sons.
Related Articles: DungeonQuest Revised Edition, Tabletop
Share
Tweet
Share
Submit