Sakura Wars is the perfect encapsulation of a playable anime. Love it or hate it, it’s got all the tropes, character archetypes, and predictable villains of your typical action-comedy anime series. While I found some elements to be cringe worthy or tired, I’d be lying if I said I wasn’t having a blast anyway.

The latest entry in the Sakura Wars series, just titled Sakura Wars in the West, is actually a soft reboot. There are a few returning characters and story elements, but it largely focuses on a new cast of characters so while returning players will find fun easter eggs and references to past games, newcomers won’t be missing out if starting here. As Seijuro Kamiyama, former navy captain, you’ll guide the mess that is the Imperial Combat Revue to stardom in an alternate history of 1940’s Ginza, Tokyo. The majority of your time in Sakura Wars will be spent interacting with your all female troupe members; encouraging them, giving advice, or just hanging out with them. At the end of each chapter, each character will perform better or worse in combat based on how you interacted with them. Unlike many games with dialogue choices, there are right and wrong answers in Sakura Wars, so you’ll want to think carefully in the short time allotted for each and every dialogue option. 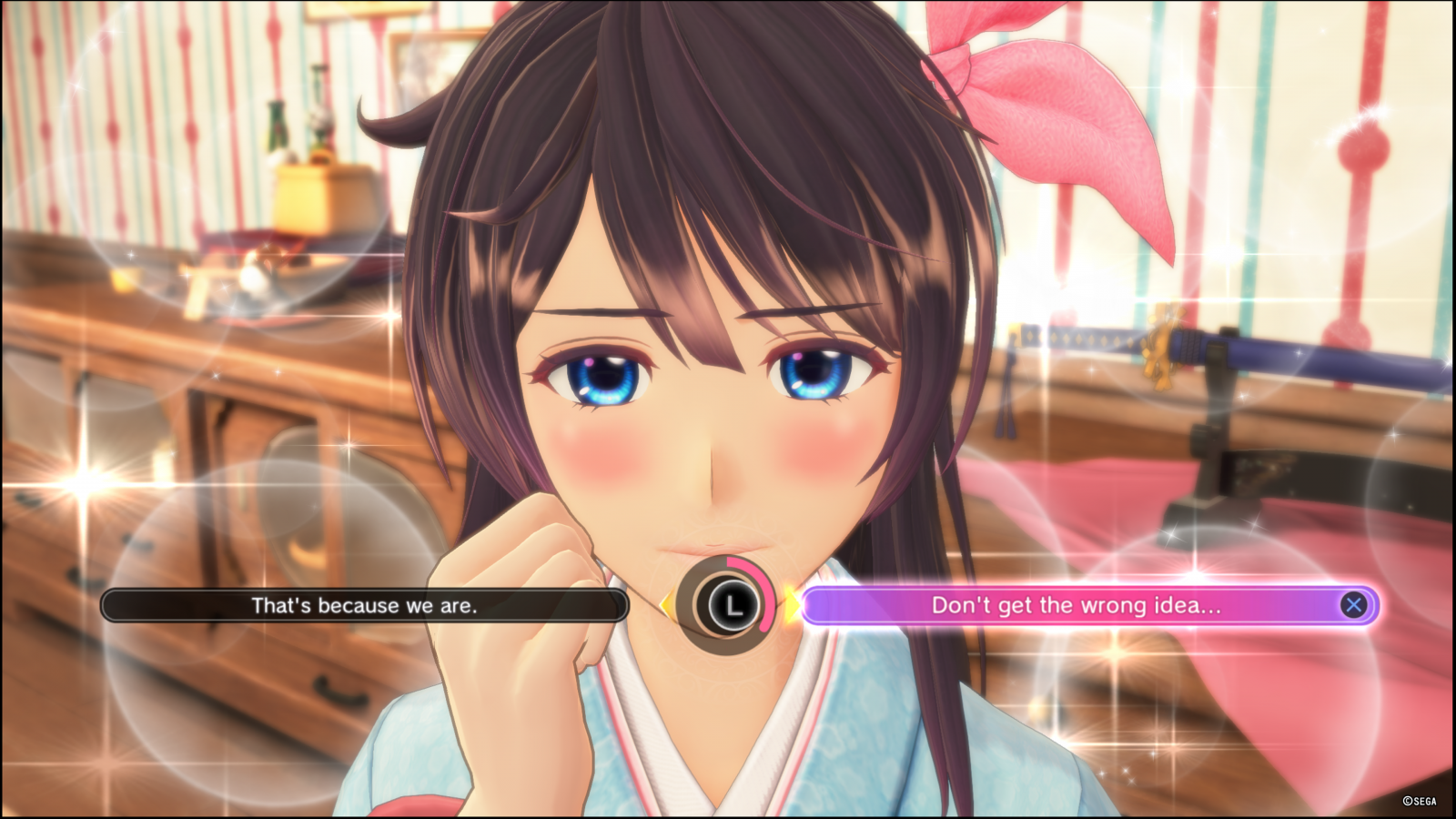 Adventure mode and Combat mode interact with each other in a satisfying way, but there are a few glaring problems with the way Adventure mode is handled. In every episode you’ll spend at least one to two hours straight walking around talking to people, and then about fifteen minutes actually piloting your mechs defending Tokyo from Demons. Your escapades around Ginza will occasionally be interrupted by a raid, or a short combat section, but this only happened a total of three times in my playthrough. You can take a break from social interactions by replaying a chapter’s climax with different characters for an increase in affinity, but that can get old pretty fast. Adventure mode would benefit greatly from something to break up its pace, for example a minigame where you manage the day to day operations of the Imperial Theater like its finances or what play you’re putting on next would have done wonders for further connecting the two halves of the game and reducing monotony.

This may just be a cultural difference, but as I said in my preview of the game, scenes where you can perv on one of the girls or are called a pervert for a simple misunderstanding made me feel very uncomfortable, especially considering everyone’s ages; one of the girls is only 13 years old. (Seriously, please stop.) While these scenes were annoyingly frequent, the interactions you do have in Adventure mode are generally well thought out and make you grow closer to the characters. It’s a lot of fun to see your comrades grow as actors and as people and satisfying to help them through a difficult time. By the end of the game, even if you don’t like more than a few of them at first, you’ll regard each of them as close friends and trusted allies. Sakura Wars may stumble in many aspects, but getting you invested in most characters’ (I found the rival Combat Revues to be annoying at best) individual struggles is one way the game excels. 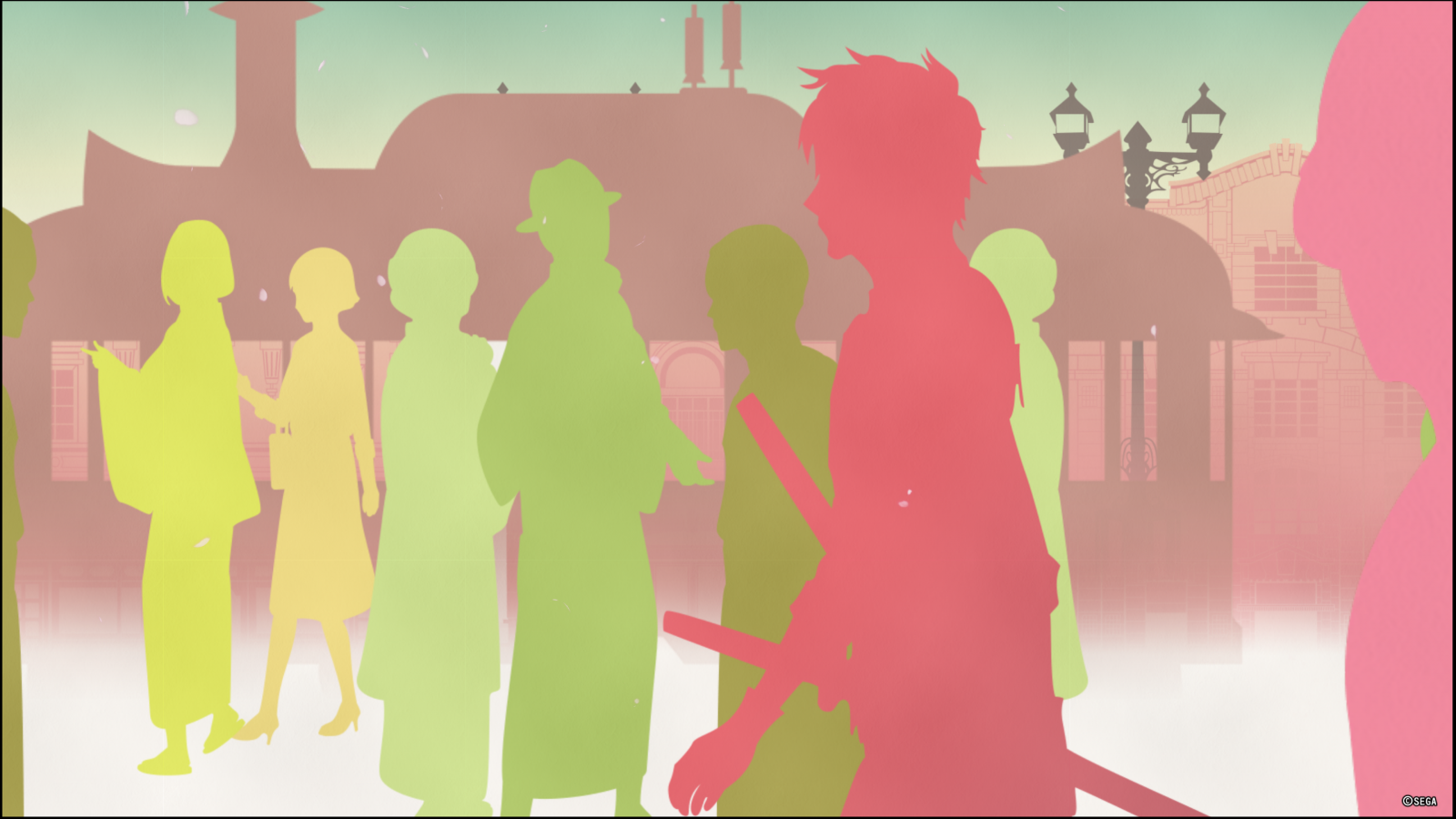 Visually and audibly the game is stunning. Sakura Wars’ version of a steampunk ‘40s Tokyo feels very unique. It’s a little weird at first to see people wearing traditional Japanese garb along with trilbies or military uniforms, but it’s a very cool aesthetic I’ve never seen done before. While many character models stick with the anime style of big eyes, the environments and other characters shift just a smidge towards realism which makes the overall look just that much more unique. You’ll see grass that looks recently mowed, realtime reflections in mirrors and marble, and many other impressive details. The music is a perfect fit for the game’s world too; songs have a big band style to them or use eastern instruments or even just go hard into anime rock and roll. The opening theme in particular is a standout here, being composed by Kohei Tanaka who’s known for his work on One Piece. It’s a catchy tune that never failed to get me hyped up when it plays in certain battles.

Each chapter of the game is structured like an episode of an anime, complete with intermissions and next episode previews. In the build I played, these intermissions were the only point at which you could manually save the game. While manual saving will be added in a day one patch, I would recommend taking breaks at these intervals, save for the ones just before combat sections. Each intermission feels like a natural end point to stop playing and kind of serves as that much needed pace breaker to Adventure mode’s shenanigans. While combat sections are few and far between, they offer stylish yet simplistic mecha action. In each level, you’ll play as Kamiyama along with one or two other members of the revue whom you can switch to at any time. You can perform a short combo string which you can then transition into a finisher using the Circle and Triangle buttons respectively. As you platform your way through demonic realms, you’ll face off against waves of demons and put your friendships to the test with the morale system. 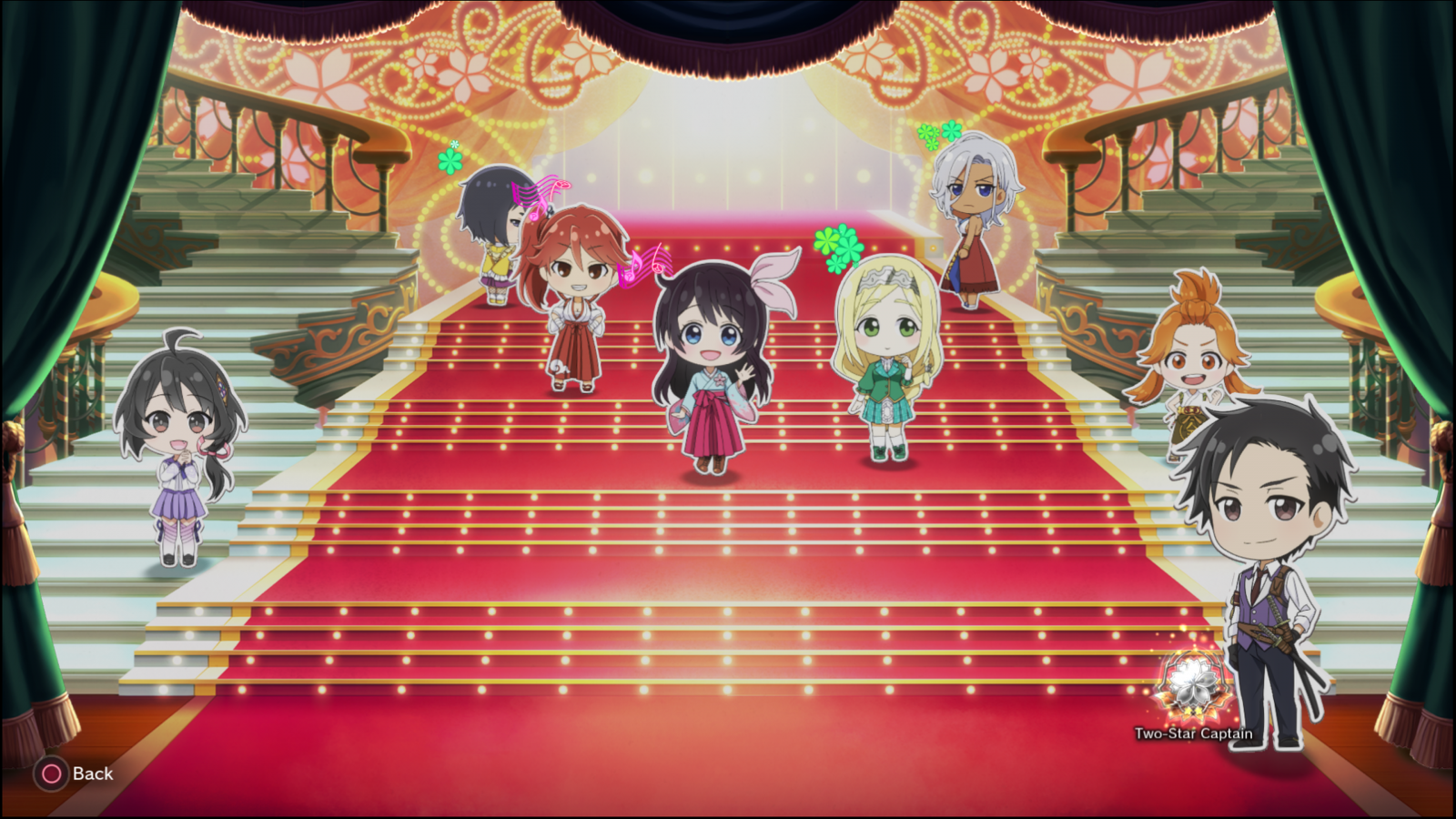 Your group’s morale starting point, on a scale of one to ten, is determined by how you acted in the preceding Adventure Mode. Fighting well will further increase your morale, and thus your attack and defense. High morale can make even bosses fall to your might incredibly quickly, while low morale can make fights a struggle. Ending a level with high morale feeds back into Adventure Mode, with your friends growing closer (represented by a cute paper doll model slowly advancing towards the screen) and unlocking new scenes. The combat is simple, yet fun, and each character has their own unique play style, but the levels themselves could have used some more enjoyable platforming challenges. Exactly one level uses a unique character’s gimmick of being able to float to the ground slowly and the two matches you partake in in the world revue games have interesting mechanics, while all the other levels have very simple gaps to cross either by jumping or running on specific crystalline walls. The simplicity isn’t exactly a hindrance to the level design, but it feels like they could have strove for greater heights in these sections, sometimes literally.

A stylistic choice that does not work in the game’s favor is the aforementioned big anime eyes. Kamiyama looks like he fits in the more realistic environment because he has less exaggerated proportions, while Sakura for example looks freakish and out of place. I eventually got used to this dissonance, but I wish I didn’t have to. I think having every character possess more realistic proportions would have made the game stand out in a sea of anime style games that are essentially soft-core porn (again, please stop being creepy about these young women, video games). If a hypothetical sequel could remedy these faults and treat its female characters with more respect, I think Sega would have a truly great game franchise on their hands.

Sakura Wars is a great entry point to a fascinating series. If you wish Persona had a bit more action, you’ll find exactly what you’re looking for here. While the “sexy misunderstandings” are cringe worthy, the characters are fun to interact with and the giant robots are a joy to pilot.

David is the kind of person to wear his heart on his sleeve. He can find positives in anything, like this is a person who loved Star Fox Zero to death. You’ll see him playing all kinds of games: AAAs, Indies, game jam games, games of all genres, and writing about them! Here. On this website. When not writing or playing games, you can find David making music, games, or enjoying a good book. David’s favorite games include NieR: Automata, Mother 3, and Gravity Rush.
Related Articles: Sakura Wars
Share
Tweet
Share
Submit