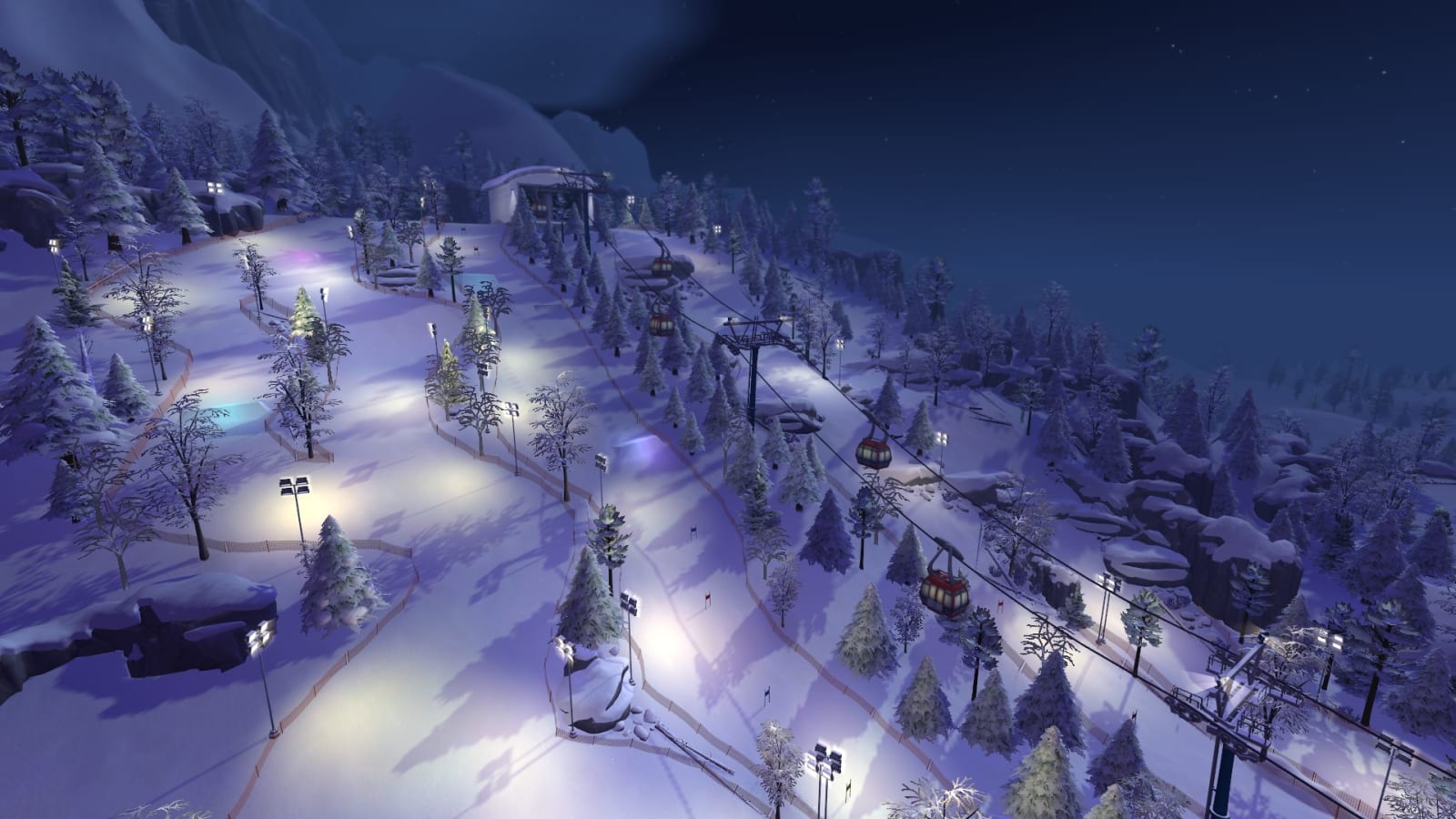 The Sims 4 Snowy Escape expansion pack released this week on November 12th, and with it comes quite a bit of new stuff. The biggest thing to unbox with this expansion are the new Lifestyle and Sentiments that will modify how your Sims live, interact, and respond to people and situations around them. There are 16 Lifestyles which change behaviors MUCH more than the Create A Sim traits from your character creation. Sentiments will show how two Sims can feel differently about a shared experience, which can change their relationship and how they interact with one another. But is all the added drama worth it? 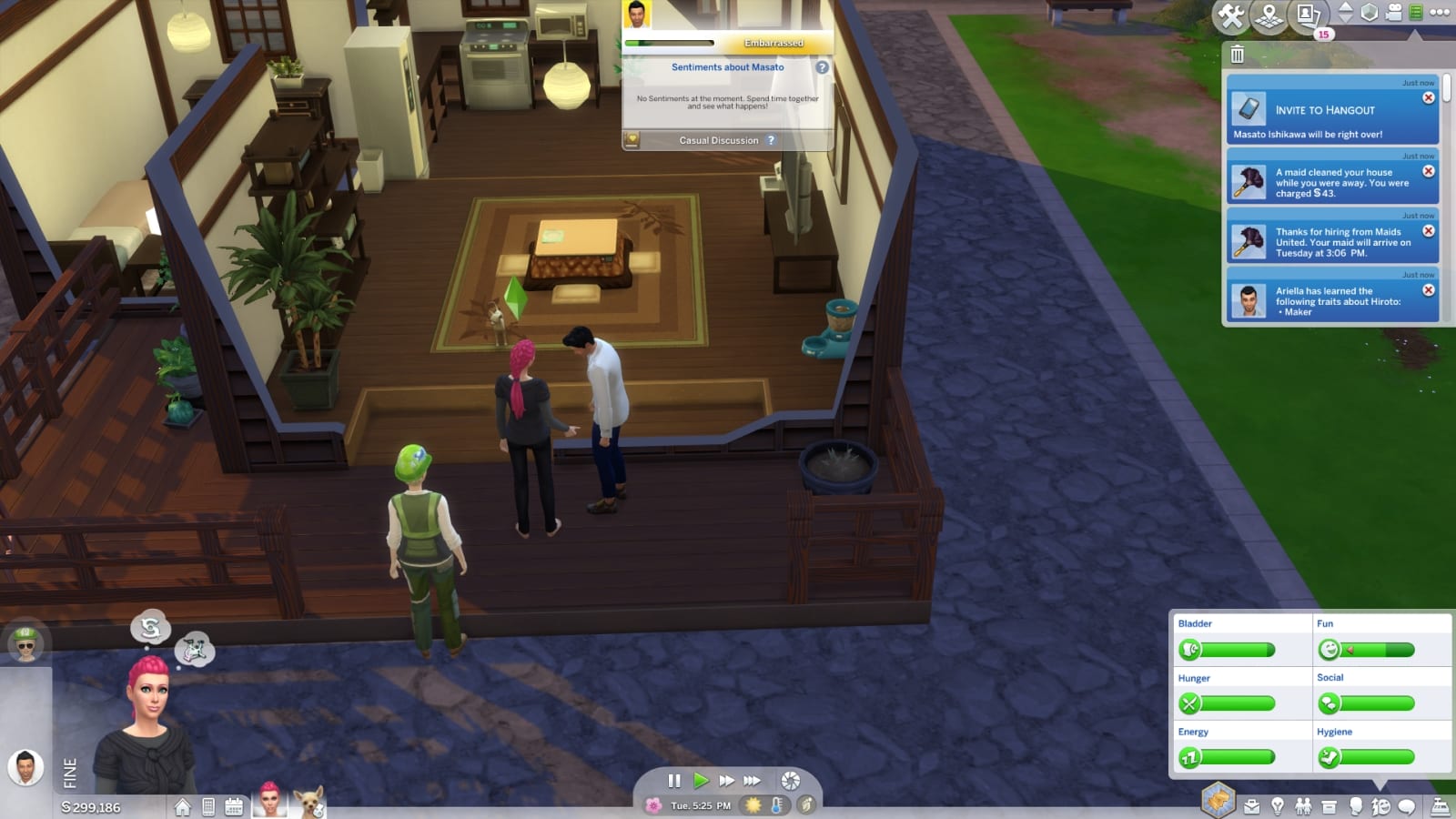 Sentiments will pop up at the top of the screen while interacting with another Sim. The more you get to know them, the deeper the relationship gets.

You’ll sometimes see special social interactions when you’ve raised a Sentiment with another Sim, an example being the bartender in the lounge was having a hard time in a relationship, I had the option to give him advice to try to talk to the other person and work things out. He later called me to thank me, and told me that he did indeed work out his issues with his friend. You’ll also now see a tiny little book attached to Sims you’re talking to on the top of the screen, and clicking this book will open up the Sentiments shared between you and the Sim. Enough Sentiments shared between Sims begins to affect the autonomous actions and feelings that you and the Sims around you have, sometimes bringing drama, anger, or unwanted affection. One thing is for sure, it spices things up and really brings a much deeper connection to your Sims lives, and was a fantastic addition to the franchise. I created a new character specifically for this expansion review, but I am excited to see how this changes things for my main family I play regularly. 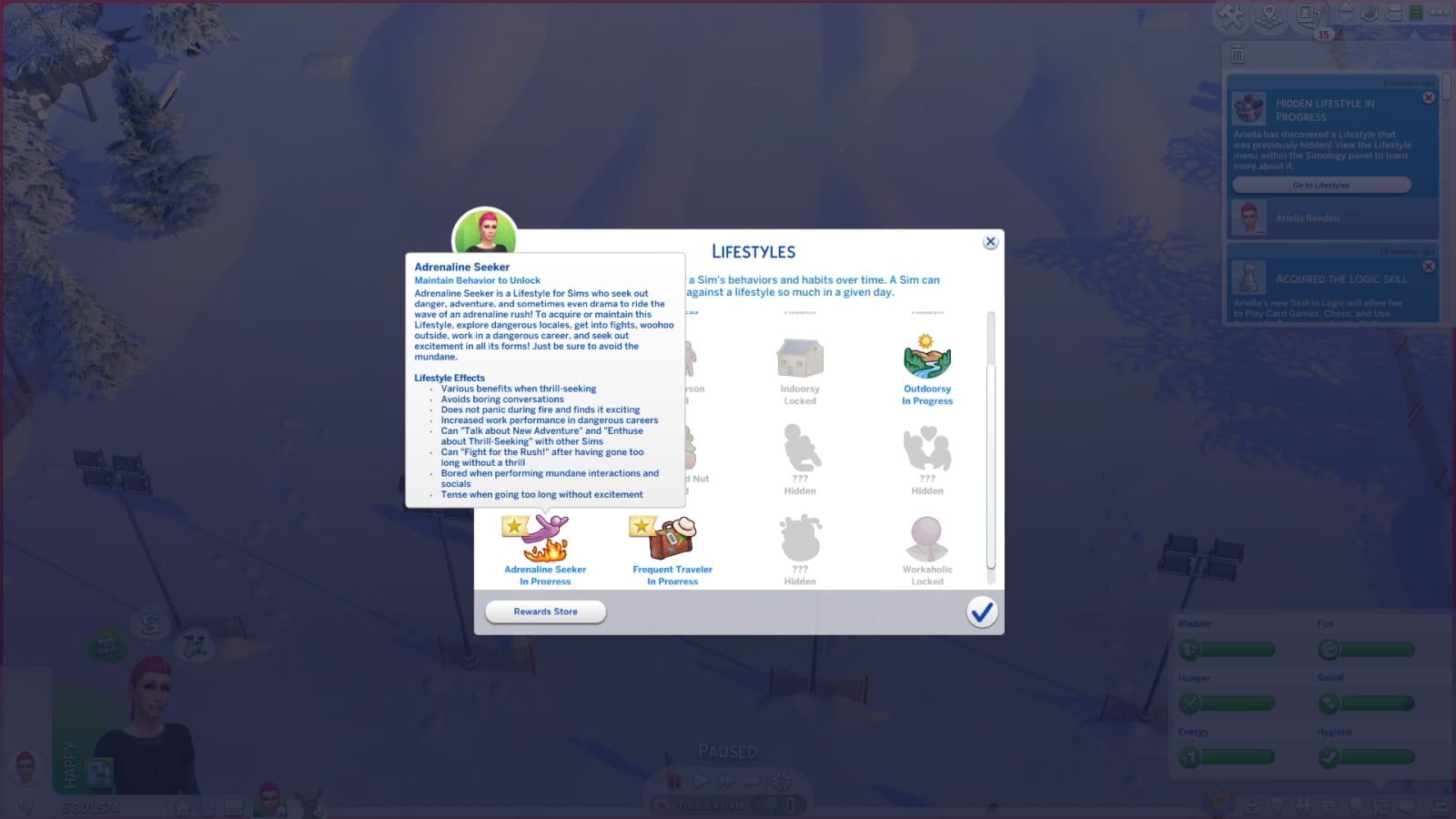 A glance at the Lifestyles panel.

The Lifestyles will add a lot more depth to your Sim’s personality. Everyday things that your Sims do add to their Lifestyle stat. Some examples are being Outdoorsy, being Energetic, and being an Adrenaline Seeker. These Lifestyles will bring perks, such as avoiding boring conversations, and not panicking when a fire breaks out, both of which are associated with the Adrenaline Seeker Lifestyle. Though, just like your traits you choose when you create your Sim, these can come with some downsides too, like getting negative moodlets if you don’t seek thrills often enough. 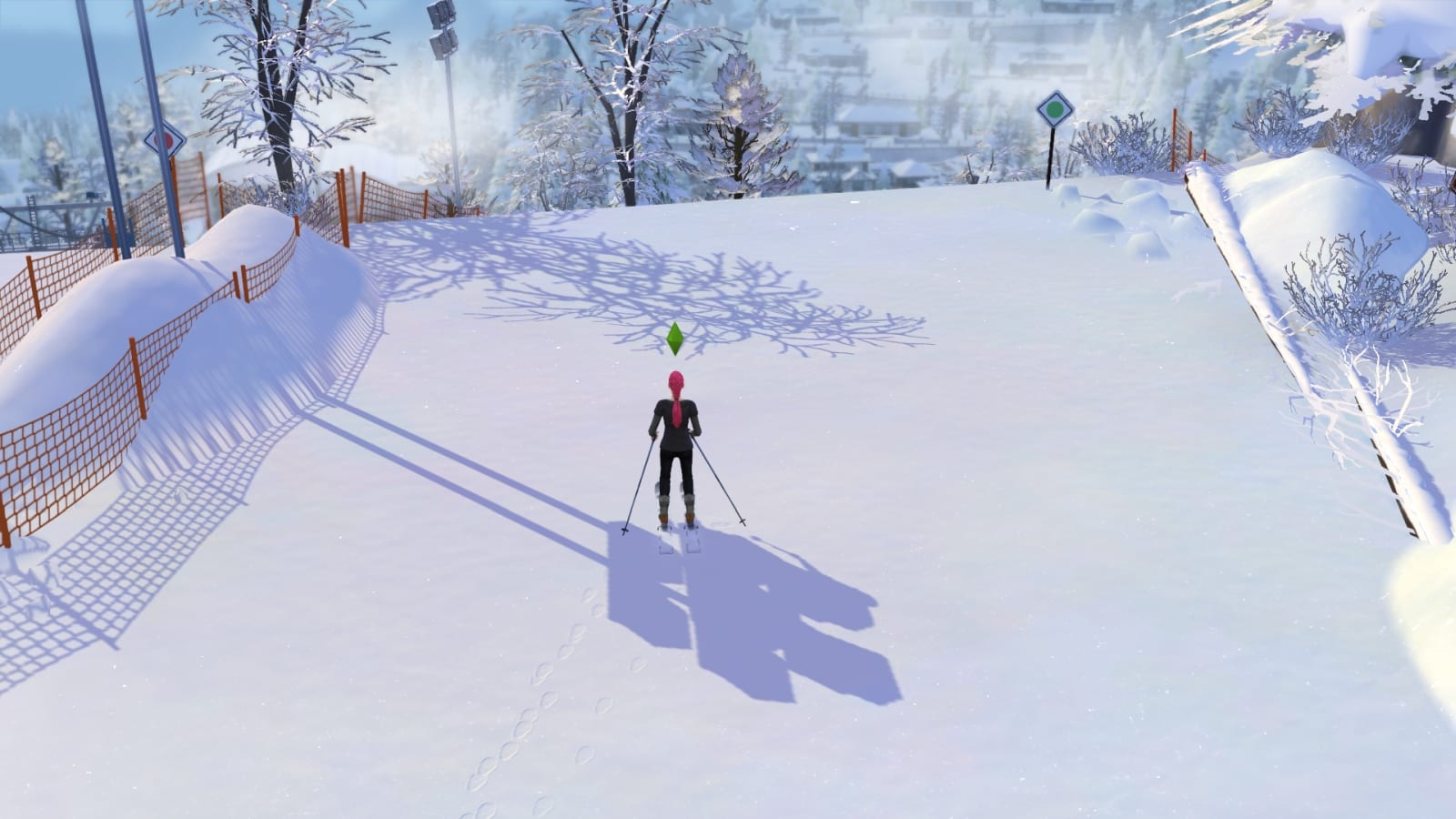 Hitting the slopes at Mt Komorebi.

We also have a whole new Japanese-themed map to play on called Mt. Komorebi, where your Sim can hit the slopes to ski, snowboard and sled. In order to get started with skiing or snowboarding you’ll first need the equipment, which you can buy from any Bits n Bobbles vending machine around town (there are a lot) or from Build Mode in Outdoors > Transportation. You can take the ski lift to the top of the mountain and ski down, or hit the bunny slopes which are off to the side of the ski lift. There is also a wall you can rock climb at the top of the ski lift, as well as a beginner wall by the bunny slopes. Once you’ve leveled your skill up a bit there are additional snowboards, skis, and outfits unlocked.

After you’ve hit the slopes, you can soak your sore muscles in the hot springs at the Sutefani Onsen Bathhouse. Be careful though, you’ll get shamed if you don’t shower before getting into the springs. They gave a nod to a lot of the Japanese culture with this pack, including taking off shoes before entering the house. You’ll get an embarrassed buff called “So Shoe Me” if you enter a home with your shoes on. There are dozens of new cultural build and home items as well, so those of you wanting a more Eastern look to your builds should be pleased. I’ve found the new items to be a mix of ski lodge and Asian-inspired. There are also two new activity tables for kids that I discovered, you can find them under Kids’ Room > Kids’ Activities. 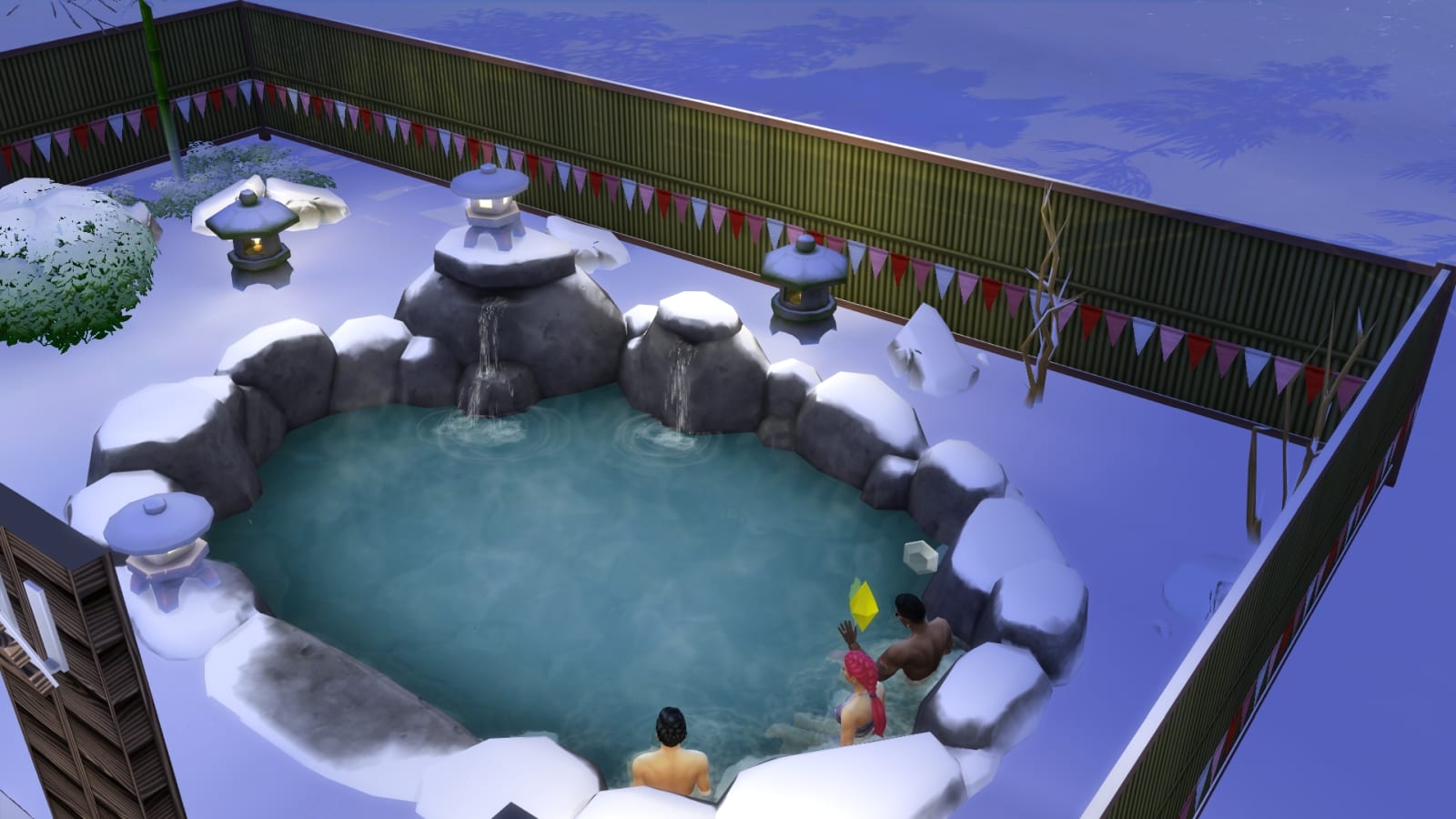 Relaxing in the hot springs after a painful day of learning how to ski!

Your Sim can also hike by choosing to do so from the boards you see near the bamboo forest (totally not obvious at first), though you’ll often get attacked and bitten by bugs and creatures. A trip to the vending machine to buy a salve will fix you right up. You can also encounter both good and evil spirits on your hikes that will grant wishes, or sometimes bring bad omens and cause mischief.

The clothing options in this pack left a lot to be desired for my personal tastes. Most of them are bulky and baggy, and with the exception of a couple of pieces that look like you’d wear them snowboarding or skiing, they are just unflattering. I did enjoy several of the new hairstyles though!

Make sure you check out the festivals that run on the new map too, there are fun things to buy, see, and eat there! 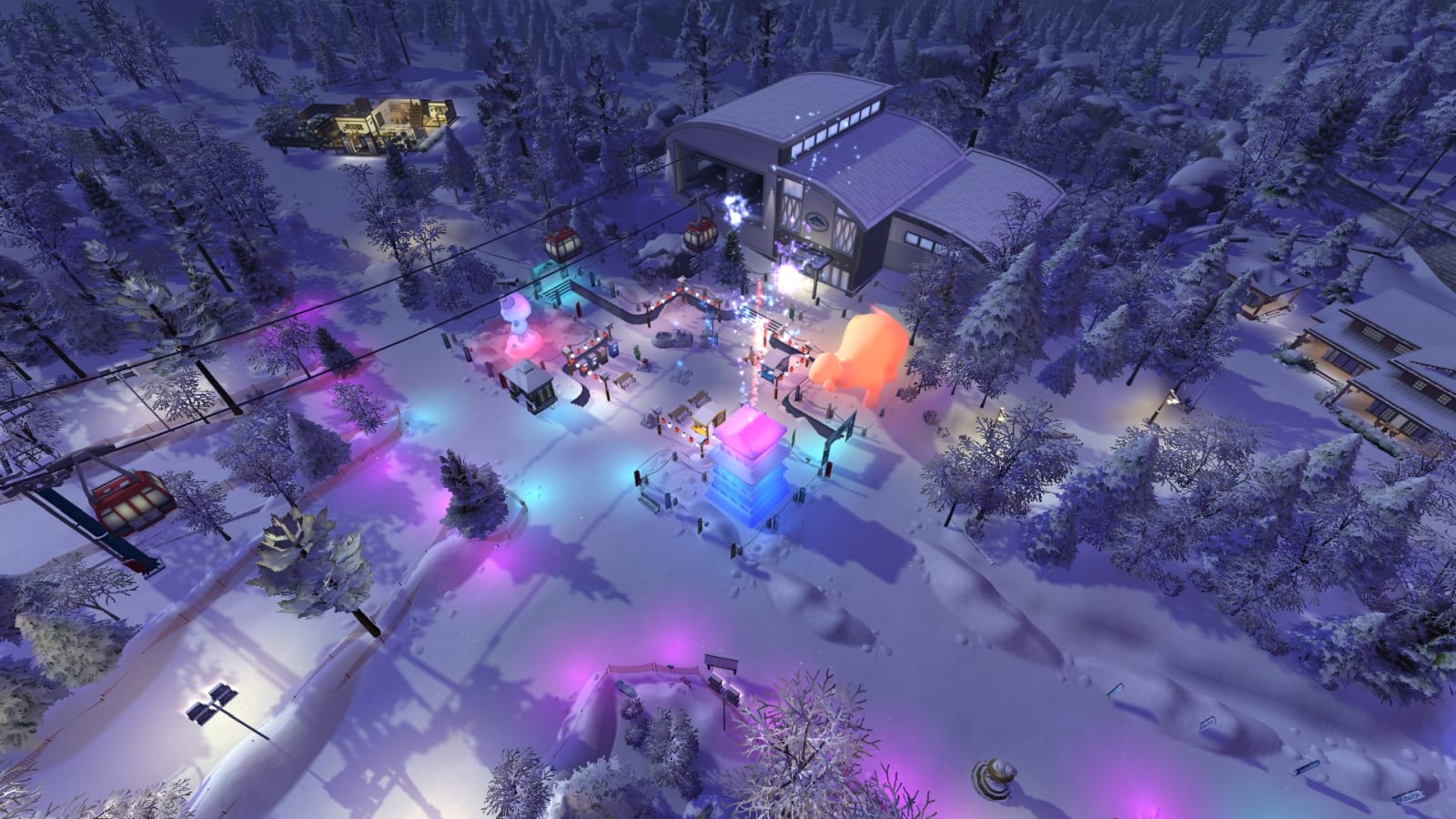 The Sims 4 Snowy Escape expac has kept me busy over the last few days, and I have really enjoyed exploring the new map. Grab your chopsticks, skis and gloves and head on over to Mt Komorebi to check things out, you’ll have a blast. Snowy Escape is currently retailing for $39.99

The Sims 4 Snowy Escape Expansion pack was quite enjoyable, and I am very excited to dive in with my regular Sim family to check out the Lifestyles and Sentiments between them. There is plenty to do to keep you busy with the new sports that were added, though honestly the rock climbing and hiking could have been more obvious to figure out. I am sure there are still things I have not uncovered yet in the expansion, but I look forward to exploring Mt. Komorebi further. It’s a solid expansion, and I enjoyed it much more than the previous Eco Lifestyle expac.

Holly Hudspeth is a best-selling author living in Fort Worth, Texas. She has six published novels to date; The Skyy Huntington Series, which is an epic dark fantasy adventure, and One Small Detail, a stand-alone medieval fantasy. Holly also enjoys writing fan fiction based on her avatars from games such as EverQuest, Elder Scrolls Online, and World of Warcraft. Her first major purchase at the established age of nine was the NES, and she has been gaming ever since. She enjoys fantasy games, city builders, RPGs, MMOs, SMITE, and The Sims franchise. Most nights she is in SMITE with her husband and friends, or playing ESO. When she isn't gaming, she is probably either at Disney or planning her next trip there.
Related Articles: The Sims 4 Snowy Escape
Share
Tweet
Share
Submit