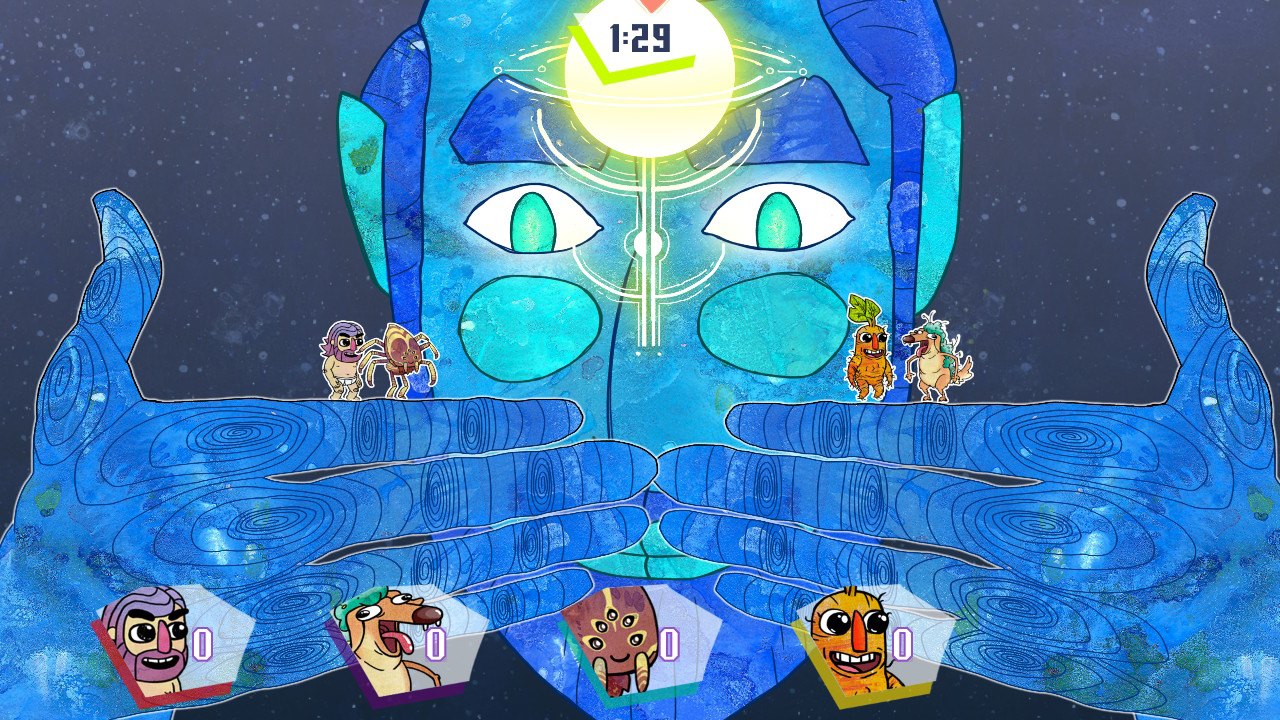 Couch party games have become a bit of a forgotten genre over the past few years. Luckily the Nintendo Switch has come to bring back this lost style of games. Developer Bread Machine brings to us SLAM LAND, a basketball inspired 4 player couch co-op game, in which you must fight grab and “DOUNK” your opponents to impress a giant blue galactic being to win.

Upon opening up SLAM LAND, you are brought directly to an intro screen that gives you a quick demo on how to play the game. You jump with B, grab with Y, move with either the control stick or D-pad buttons, and then find the hole in which to dunk into. The controls are very simple, which is nice for a pick up and play couch co-op game like this one. Though simple, players will still have to get used to the physics and floaty-ness of the game, along with the game’s pace. SLAM LAND’s gameplay is rather quick and chaotic. This brings a good amount of fun to the experience, but also makes it difficult at times to keep track of your character.

The character and level design in SLAM LAND is one aspect that initially drew me to the game.  All the characters are weird yet interesting, with a chili inspired look to each of them. There are five characters to choose from including Human, Spoder, Mold Dog, Toober, and Skelly, and all have different skins to choose from that make these wacky characters even wackier. I loved looking through the skins and characters, as they each have their own charm and work perfectly in this odd world in which the game takes place. Speaking of the world, let’s talk level designs. There are ten levels to experience, each having their own unique layout spanning across four various themes. The levels are all the same hand drawn wacky art style and put you in a forest, cave, in space, and literally on the hands of the giant blue galactic being. Like the characters, I loved the way the levels looked and felt. The varied level layouts allowed for different strategies on how to slam your openers into the levels basket/hoop type zone. The dunk zones changed with each level as well; dunking players into a tree, cave monster, sun, or the mouth of a triangular teneticled space creature.

SLAM LAND offers five game modes to play that each have their own rules, but they all focus on slamming things into a hole to earn points. Peanut mode has the players fighting over a peanut, the peanuts point value goes up as its held without being dropped or dunked. Horse mode is similar to the traditional stand and shoot basketball game; black horses resembling knight pieces from chess will generate on the map with a letter under them, the goal is to dunk each letter to spell horse before the other players. Trash mode has you collecting bags of trash that can be stacked on top of each other to then slam into the dunk zone. Quick Slam is straightforward and lets you pick the rules and serves as any other quick play-esque mode; in this mode you dunk other players. Lastly is Slam Tour, this was probably the most fun of all the modes. Slam Tour is a five round match that has you going from map to map playing the various modes, while earning as many points as you can throughout each game to be added up at the end of the tour.

All of the game modes were a good bit of fun, whether playing by myself or with a group of friends, and everyone who I played with enjoyed the game due to its weirdness and simplicity. The main problem I have with this game is the lack of incentive to go back or keep playing. There is a good amount of content up front, but nothing new to unlock. I would have loved to see even more levels or skins for the outlandish characters to compete on and wear. On top having nothing new to unlock, there is no online play at the moment. Not having online isn’t a bad thing when you think about a game just wanting to be couch co-op, but this limits the amount of competition when you narrow it down to just your friends and family.

Overall SLAM LAND is a fast paced and fun game, bringing with it really great art design, charm, and couch co-op experience. Although I feel like the game becomes repetitive and doesn’t provide much incentive to come back to it. If you are looking for a party game to pick up and play with family and friends, at $7.99 on the eShop, SLAM LAND is worth picking up. For gamers looking for a deeper, more varied couch co-op, party game, then there are a couple better ones out there and on the way there you can pass over SLAM LAND, without too much hesitation.

SLAM LAND combines a great art style with a decently fun couch co-op basketball hybrid game, in which dunking your friends and objects in the only objective in the game. Although there is a decent amount of content here, the lack of unlockables and no online play gives little incentive to come back to or continue playing SLAM LAND.

From Southern New Jersey, Shaun has always been a huge fan of video games as well as nerd, geek, and pop culture. No matter the topic of conversation, Shaun can always find a way to slip in a movie or TV quote to get a laugh. When he is not playing games or watching shows, Shaun works as a substitute teacher during the day and as a bartender at a local brewery on nights and weekends.
Related Articles: SLAM LAND
Share
Tweet
Share
Submit