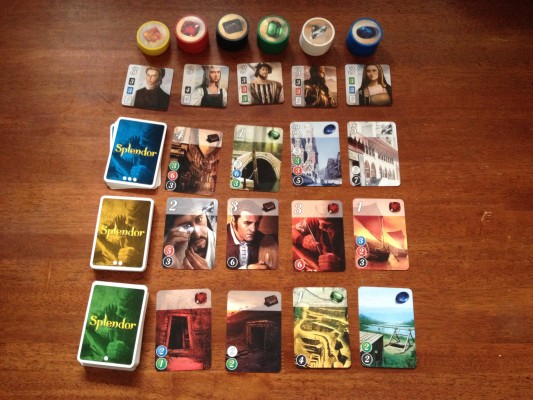 Poker chips, cards, and a few cardboard tiles. The unassuming components make Splendor appear quaint. The cover of the box show an elderly gentleman holding several different gemstones, as if he holds the wealth of the world in the palm of his hand. They say you can’t judge a book by its cover, so maybe you shouldn’t judge a game by its box or components.

Speaking of components, there aren’t very many included:

The gems tokens feel like heavy poker chips. Indeed, they do make a nice clicking sound when hit against each other. The cards shine without having a wax texture laid upon them. They don’t seem to be showing any sign of wear, even though they have played with during several games. The noble tiles are thick and sturdy cardboard, signifying their importance.

Each development card has a gem in the upper right-hand corner, while the bottom left shows its cost. To gain a development card, you only need to turn in the gem tokens required for its cost. When you gain the development card, you lay it down in front of you and get a permanent discount in future turns. This means that a card that might cost four red (ruby) chips would only cost you two red chips if you have two ruby cards in front of you. Points are shown in the upper-left corner, and it’s important to notice the number of points they are worth since you need at least fifteen points to win the game.

The three decks of development cards have dots and a different color backing to indicate level. The lowest level has the development cards that are the easiest to purchase, with most being worth no points and a scant few worth one. The middle level costs slightly more with cards worth one to three points, and the highest level are worth the most at three to five, but they look impossible to acquire at the beginning of the game. Gaining development cards for the all important discount will benefit you later in the game to gain these cards.

At the end of the turn, players can get a visit from a noble. The noble tiles are automatically given to a player when they satisfy the conditions needed for them. The current noble tiles require either three development cards of three different colors, or four development gems of two different colors, with the specific colors shown on the noble tiles. Each of these noble tiles are worth four points, and gaining them can turn the tide of the game. However, only one noble card can be acquired per turn, even if two are eligible to visit.

Splendor is deceptively easy to teach since there are so few options for each turn. In all honesty, describing the gameplay horribly defies the simplicity behind its design. However, deciding what to do can be difficult because of all the options available. Do you take the two chips of the same color, or do you try to gain three and hope you can get the colors you need your next turn. Do you take the development card you can claim for nothing due to the discount you get from the development cards currently in your possession, or do you pay a few gems and get a more expensive card that gives you more points? Will you be able to pay for that card you need before someone else takes it or gets enough points to end the game?

The play time can be rather quick once you have played a few times. Games lasting a half hour are common with experience. If you play with someone who suffers with analysis paralysis he might take a while since all information is open for everyone to see. Turns can be played quickly with players concentrating on their next move and having a backup if a new wrinkle is introduced before their turn.

A couple of issues do come to mind with Splendor. I personally would have liked to have seen more variety in the nobles, making them worth even more points but requiring even more development cards. Maybe this is something that could be found in an expansion if they are planning on making one. The game also retails for $40, which is not a bad price for the game considering the heavy poker chip gems, but some might be expecting more for the price.

The biggest issue with Splendor is the fact that the purchasing values don’t have any distinguishing marks to differentiate them by a means other than color. I played with someone who is red-green colorblind and had quite a bit of difficulty determining how many rubies and emeralds he needed for purchasing development cards. I hope that if there is a second printing they can do something to assist with this oversight.

When I played Splendor with my gaming group, some of them didn’t want to play Splendor too often for fear they would get sick of playing it, but everyone wanted to play a second game after playing it once. I enjoyed it for its simplicity, relatively fast pace, and short play time and the others in my gaming group agreed. With how easy to teach and play it is, I’m not surprised it was nominated for the Spiel des Jahres. Quite frankly, I believe that it should be the winner. Try it once, and you’ll be hooked too. Asmodee has found another gem in Splendor.

While not working as a Database Administrator, Keith Schleicher has been associated with Gaming Trend since 2003. While his love of video games started with the Telestar Alpha (a pong console with four different games), he trule started playing video games when he received the ill-fated TI-99/4A. While the Speech Synthesizer seemed to be the height of gaming, eventually a 286 AT computer running at 8/12 Hz and a CGA monitor would be his outlet for a while. Eventually he’d graduate to 386, 486, Pentium, and Athlon systems, building some of those systems while doing some hardware reviews and attending Comdex. With the release of the Dreamcast that started his conversion to the console world. Since then he has acquired an NES, SNES, PS2, PS3, PSP, GBA-SP, DS, Xbox, Xbox 360, Gamecube, and Wii. While not playing video games he enjoys bowling, reading, playing board games, listening to music, and watching movies and TV. He originally hails from Wisconsin but is now living in Michigan with his wife and son.
Related Articles: Tabletop
Share
Tweet
Share
Submit