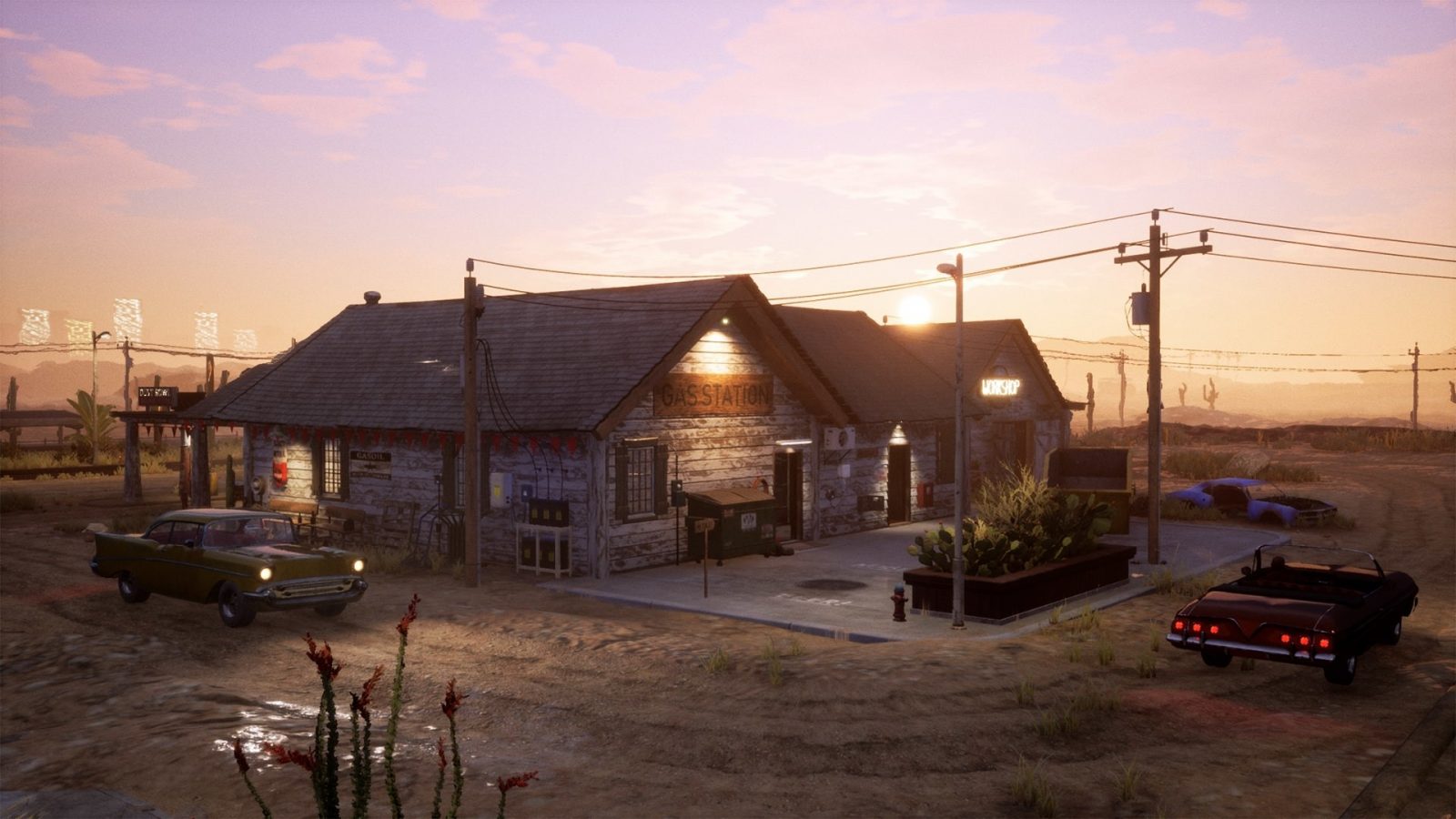 Simulators have certainly been a big part of gaming in the last decade. You can be a bee, you can be a psychotic goat, you can farm, you can be a car mechanic, there are so many things you can do, both realistic and funny. For whatever reason, we eat them up, and though there’s one for nearly everything out there, I haven’t really tried any out beyond maybe an hour in Goat Simulator. What caught my attention was the great press Gas Station Simulator received, and with the new DLC releasing and Gaming Trend not having reviewed the base game, I knew it was time to try it out.

So, it starts like this; you’re a young person who decided to drive to the middle of nowhere and sell their car to buy an old, abandoned gas station from your uncle. What a flipping premise. When I say it’s abandoned, I really mean it too, this place is nasty, covered with dirt, trash, and things I really don’t want to think about. You’re obviously starting with nothing, with nothing besides an uncle who is willing to loan you a little money to get everything started. 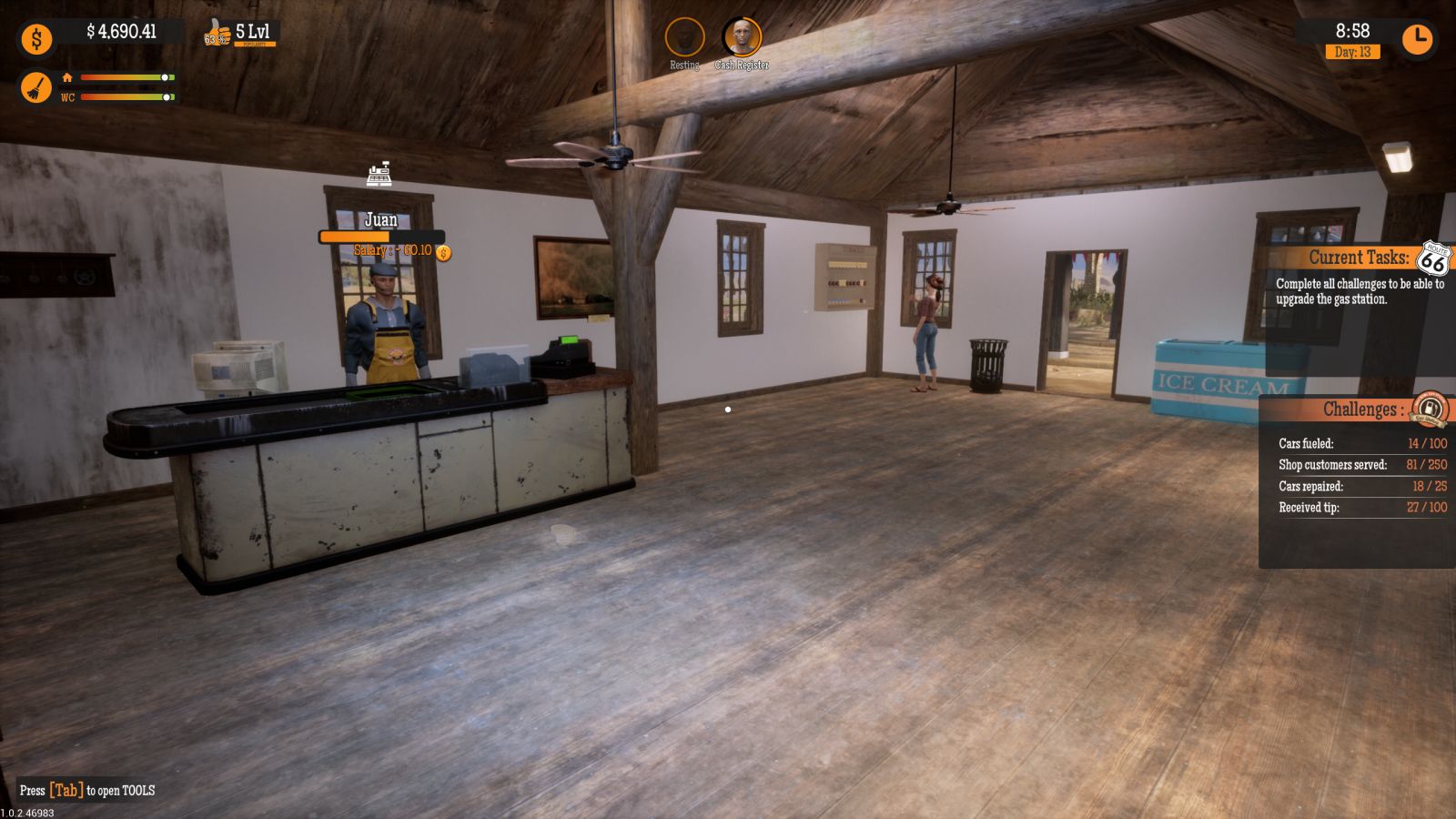 In your first couple of hours you’ll do a lot of clean-up until you hit that moment where you can finally set up your convenience store and start pumping gas, and even then there’s a little surprise when your uncle doesn’t give you nearly enough time to pay him back, leading to a goon punching you in the face and knocking you out. Your gangster looking uncle shows up afterward, telling you it was all a mistake and he didn’t give you nearly enough time, so he wipes the debt and offers to allow you to take out loans, which you will have to pay back in a more generous amount of time in the future. The story doesn’t generally hit much harder than this, and it’s not very hot and heavy past it, but it’s a neat idea and gives you a bit of lore in the background.

What you’ll be doing during your foray into the Dust Bowl is… well, sell gas. There’s a little bit more to it than that, but like many simulators, you’ll be living out the life of a gas station attendant, or at least what the team at DRAGO entertainment thinks that looks like. This one is a bit more “cartoony” in nature, with a funny feel to it. For example, you eventually have to fix the water pressure for your car wash and find you must feed the trash bags clogging it up to an alligator who is conveniently sticking his head through a hole in the wall. Beyond that, party buses show up once you’ve built the bus station, bringing with them some awesome music and a bunch of weirdos dancing in alien and dinosaur masks. Gas Station Simulator isn’t aiming for realism, and that’s just fine with me given the laughs I’ve gotten from it.

You’ll start by upgrading your space, getting a warehouse set up, putting up shelves so you can get that sweet convenience store money, a garage to fix cars, etc. Just about anything you can imagine you’d do at a gas station, you’ll be able to do here, and it can be as menial as you’d expect. Everything here is accomplished through little mini-games, pumping gas by a meter with a sweet spot to stop in to get tips, operating the register which requires you to make sure you scan something before you drop it into a basket, taking tires off of cars and replacing them; it’s a lot of busy work that largely stays fun. As with most simulators though, it does get somewhat tiresome, because the tasks required to progress generally stick with pumping gas twenty-five times or the such. 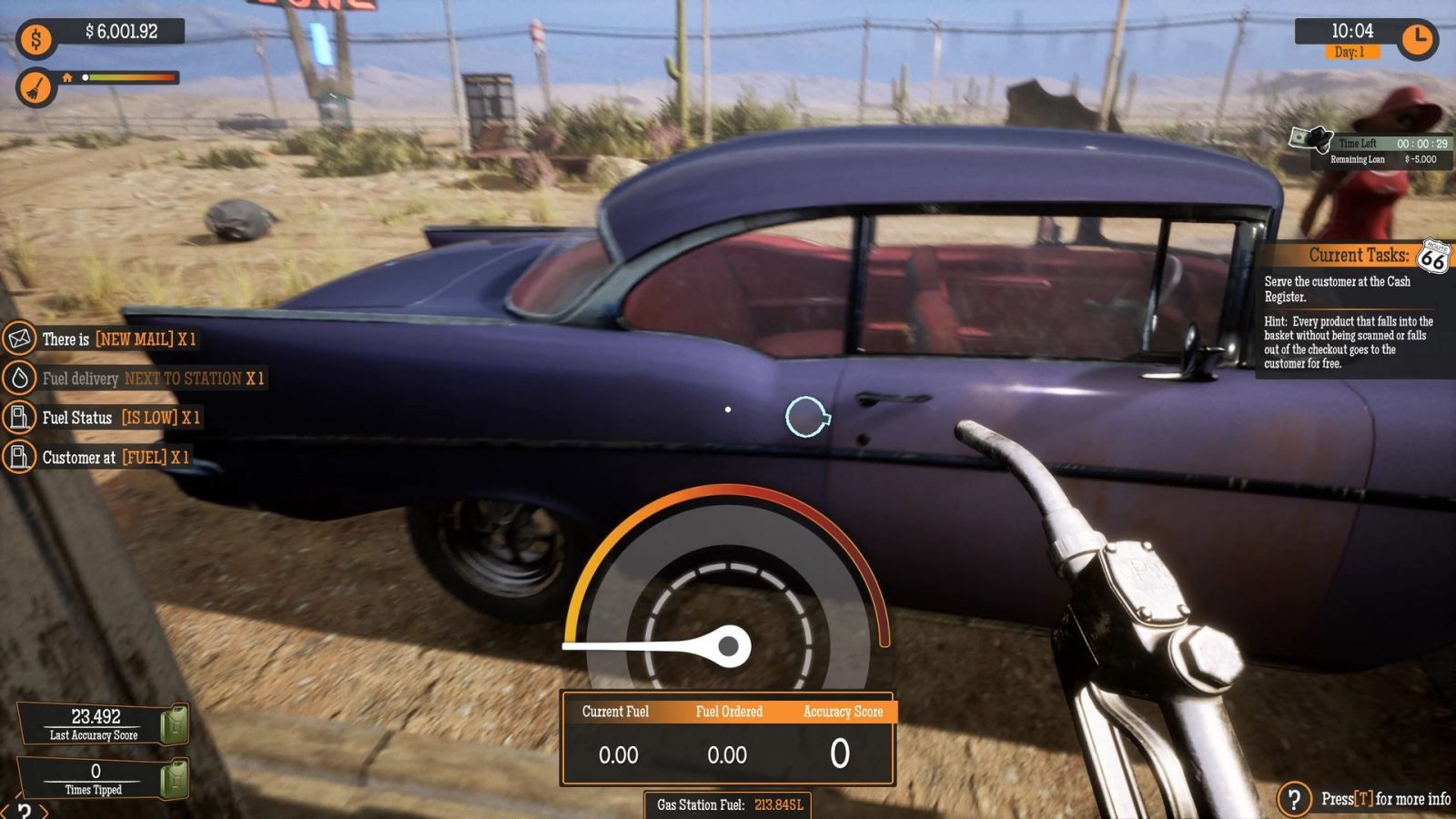 Where a bunch of variety kicks in is the upgrades. You have a computer sitting at the register where you do all of your business, whether that’s buying products, paying off loans, or of course, improving your gas station. Buying products wasn’t initially interesting to me, but I enjoy the whole management idea. It’s not complex, you just pay attention to what people are looking for if a thought bubble pops up, but you also take a look to see what is costing more or less via a clickable on the product when you’re buying it. For instance, the cola might be cheaper right now and better to buy, and the orange soda could be really expensive right now. The same applies to buying car parts as well.

Gas stations can be landmarks, and you’re trying your best to make yours into the hot spot everyone wants to go hang out at. To do this, it’s going to be more than just doing the basics. Upping your popularity by keeping everything clean and doing a good job during the mini-games is important, but adding decorations and building, remodeling, and adding new spaces to your gas station will take it to new heights and bring in more cash. The thing I probably dislike the most is cleaning the gas station. Every time I step away, I come back to a bunch of footprints and trash, and that’s if a sandstorm doesn’t come in leaving me with more piles of sand to get rid of via the little frontloader. Sure, you can have an employee clean the station (not the parking lot sand piles, that’s for you good buddy), but then you have to be on the register or in the garage. Cleaning isn’t that fun in real life, and it hasn’t been made much more fun virtually. The good news is that if you get to a moment and you’re overwhelmed, you can close the station, allowing you to catch up before a new rush comes in.

To clean and do other things, you’ll need to use the tools the developers have equipped you with, all being pretty simple to use and figure out. You’ll get a trash bag to pick up the place, a broom to sweep away the dirt and filth tracked in, a paint roller to change the colors of your station, and much more as you progress through the game. Obviously, most of these things are operated by simply going to your inventory and holding the right-click button, but it’s important to pay attention to the tools you have, as well as what you can procure through the computer as to how much you’ll be able to improve your gas station. 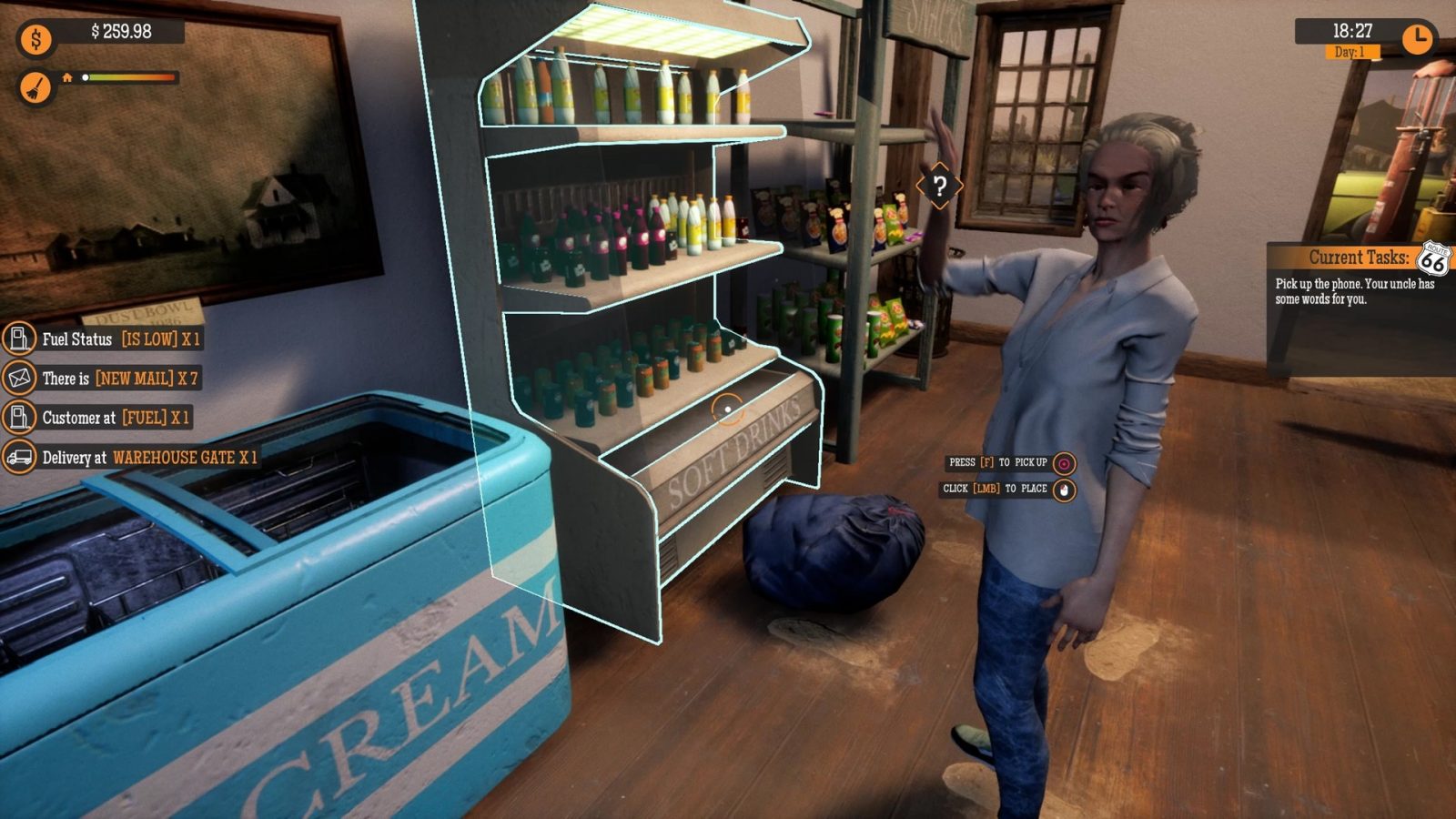 What can make your life a bit easier is hiring employees. These stay on the premises, in a trailer you’ve purchased, and you’ll have to keep upgrading it to hire more employees. I will give you one tip, don’t chase them down at said trailer when they’re resting to get them working. You can call them from any computer, making it easy to not only get them to do a task but paying them and hiring new ones. Pay attention to their skills as well, because some will at least start lower at completing certain things than others, although you can work on training them to get them to be all-around champs at everything.

Something you can’t have them do, chase around Dennis. I don’t like Dennis, a kid who for some reason has it out for me. You sometimes hear his audio cue, which is a kid laughing and shaking a spray paint can, which he proceeds to use to deface the walls of your station with things like “U suck!”. An alarm system is eventually available to help you deal with him, but even then I’m supposed to keep him from spray painting my building by throwing things at him and have to hope maybe I didn’t clean up to find a piece of trash to chuck his way. I get the reasoning behind it, but it’s not a good addition.

As far as performance goes, this one isn’t going to require you to have an RTX 3080, with relatively low requirements for your PC. On something high-end, what I’m using, I rarely ever saw a frame dip, and the game runs beautifully. It also looks surprisingly nice for an AA game, although the character models are very refined and pretty generic. One thing I did notice- the game is Steam Deck verified. Playing it on the Steam Deck isn’t easy though, because there is a lot that requires you to pull up the on-screen keyboard, and you have to use the “fake mouse” the Steam Deck offers. It’s just simpler to play on PC, but nice to know it works. 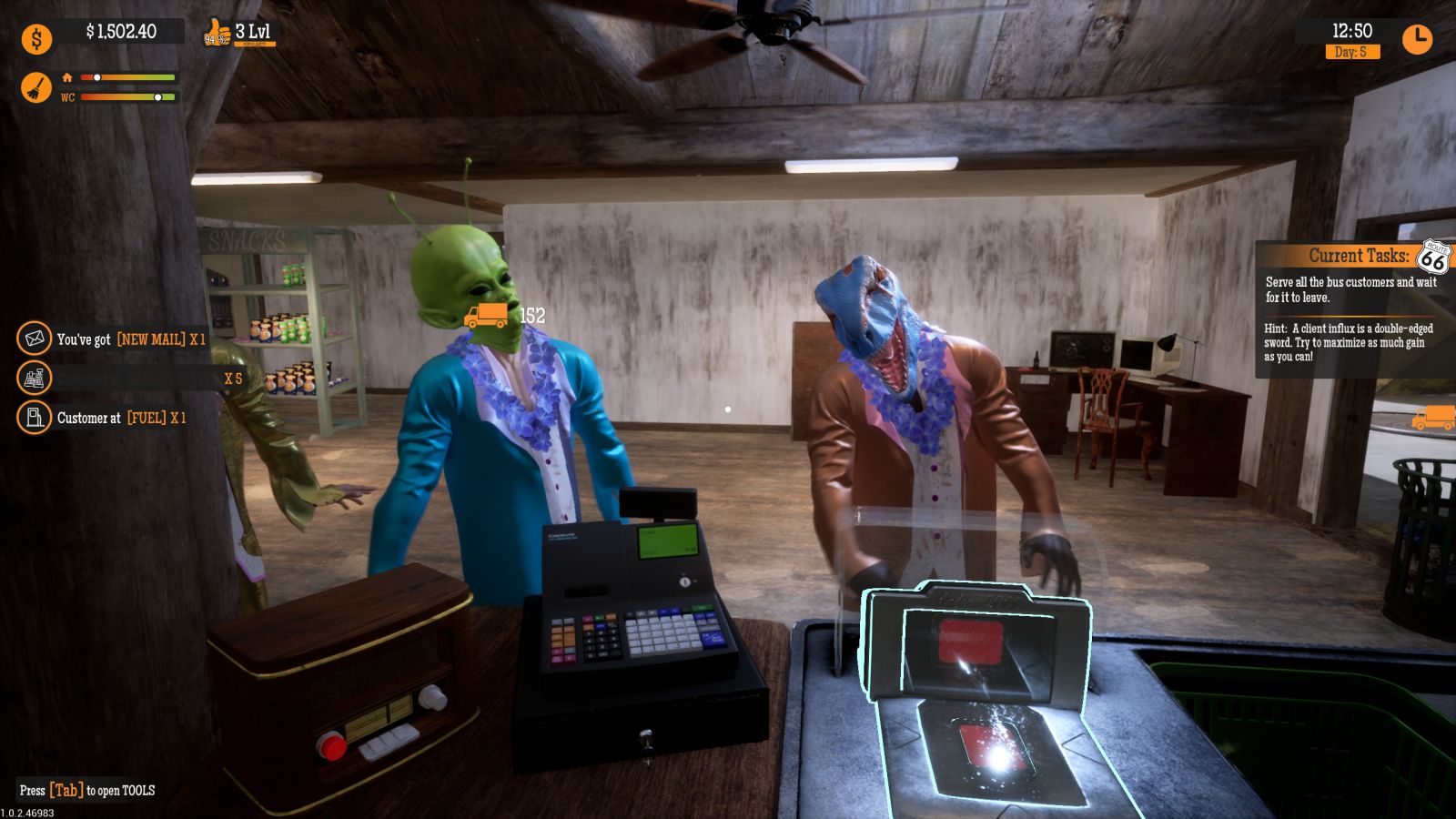 What doesn’t always work right is the jank you’d expect to run into in a game like this, with NPCs doing weird things occasionally when thrown off their programming. Once I had a truck randomly flip on its side in my car wash, with the wheels spinning and NPC acting like nothing had happened. Thankfully, if you encounter any real bugs there’s a big red button on your open sign you can hit, resetting everything. It definitely is useful in these instances.

Since this is part of why we jumped on the review, let’s touch on the “Can Touch This” DLC that just got added. One of the things somewhat missing from Gas Station Simulator was a more all-out sense of customization. You could paint the walls and decorate of course, but it wasn’t as intense of a process. With this new content, you’re afforded a tool that allows you to go nuts, changing up the walls and floor with different styles like brick or tile. If you want to go crazier, there are a bunch of different decals and pictures to decorate your gas station and other venues to your heart’s content. If you feel like your space isn’t being properly utilized, you can even change up your customer’s waiting lines, and choose how they stand in a queue to make sure things flow how you want them. At only $2.99, there’s really no reason not to add this to your station.

Gas Station Simulator feels like a weird game to want to play, but you want to play it. Like most simulators, the tasks at hand are menial and repetitive, but it’s generally a fun game to keep progressing through. The upgrades and tools are well placed to keep you from feeling like you’re dealing with too much busy work, and the humor the game injects keeps things lighthearted. Although, if we could just get rid of Dennis, I wouldn’t complain.

David Burdette is a gamer/writer/content creator from TN and Lead Editor for Gaming Trend. He loves Playstation, Star Wars, Marvel, and many other fandoms. He also plays way too much Call Of Duty. You can chat with him on Twitter @SplitEnd89.
Related Articles: Gas Station Simulator
Share
Tweet
Share
Submit