I’m going to start this review talking a little about how I got to this point in my life. I was severely injured in an explosion in the military, losing 75% of my hearing, a good portion of my balance, and picking up nosebleeds and persistent migraines. I didn’t handle it well. I felt sorry for myself and I used food to sooth my anger at the world and at my situation. I went from being in fantastic shape to ballooning to over 300lbs. At this lowest point of my life, I had a stress-induced cardiac event that landed me squarely in the hospital and at a crossroad — either lose weight or die. I ended up talking to a lot of doctors, eventually having a full gastric bypass, joining a CrossFit box, bought a BowFlex and a treadmill, radically changed my diet and my relationship with food in general, and ultimately lost over 100lbs, stacking on a lot of muscle. I’ve changed my life and find myself investing in new and inventive ways to stay in relative shape. That’s where the Stealth Core Trainer comes in.

You might be asking yourself “Why is he talking about workout equipment on a videogame site?”, and I found myself asking where this fits here at Gaming Trend — we aren’t exactly “GQ” or “Muscle & Fitness”. Well, the team at Stealth Body Fitness wanted to help people work their core, and the best way to do that and make it interesting is to gamify it. To that end, they’ve built the Stealth Workout Board — a workout device tied to an app on your phone. Using clever games to distract you while you work out, the Stealth Workout Board is a solid weapon in my workout arsenal. Let’s take a look at what makes it tick.

The Stealth Workout Board comes in three different models — Yellow (“Plankster”), Orange (“Personal”), and Green (“Pro”). The unit I am using is the Yellow model, though the primary difference between these three models is how much of the unit is covered in foam, and the overall size. The Plankster is 22” while the Personal and Pro are 26”, but the Pro uses a different material for the pad, making it more suitable for a multi-use gym — it’s essentially the “commercial” version. As I’ve not tried the others, we’ll focus on the Plankster. 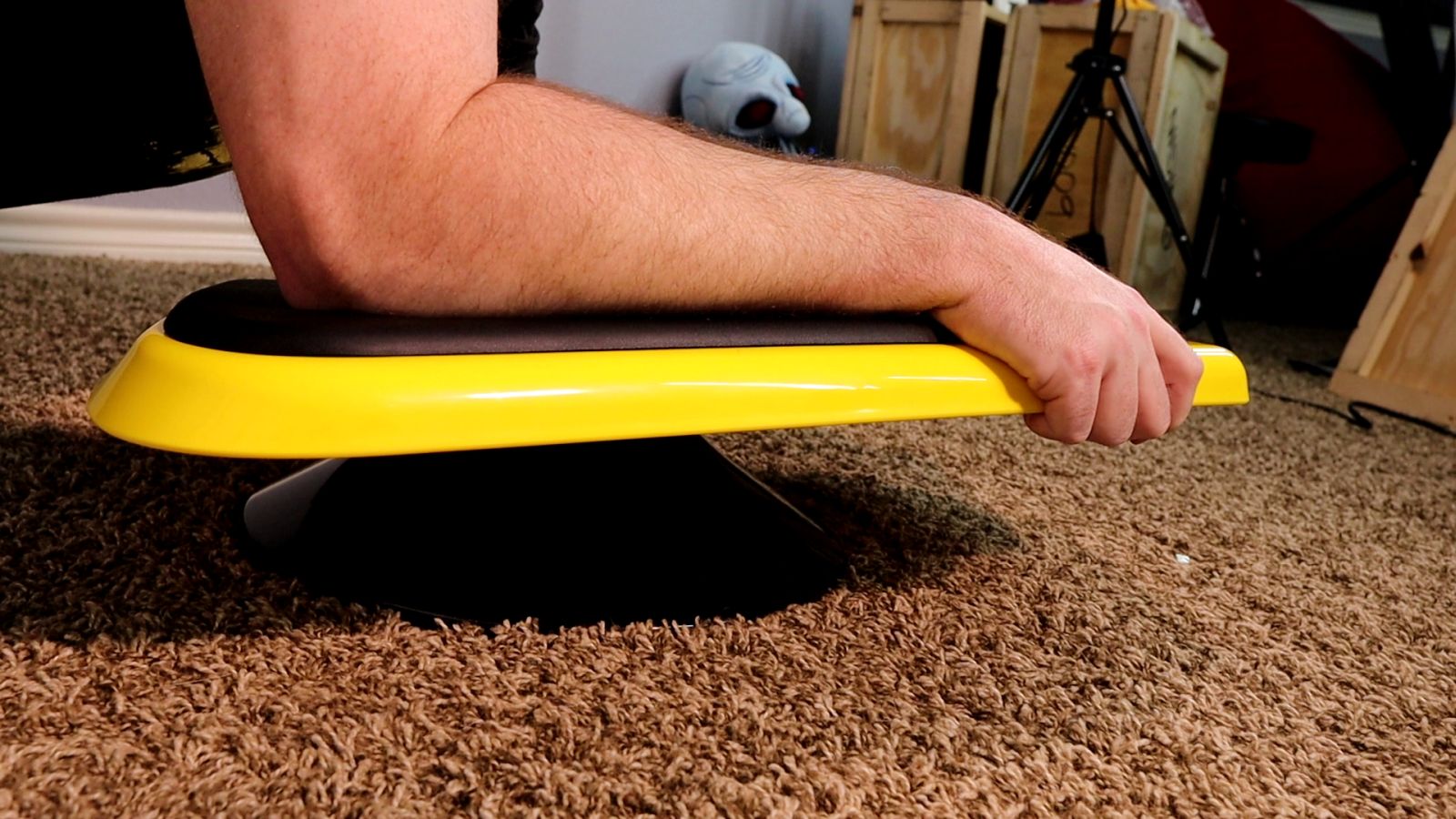 The height is perfect for planking without adding any additional difficulty.

The board material is a high-quality durable plastic, with urethane padding for where your arms will rest. Near the top of the board is a cradle for a phone of just about any size, holding it securely in landscape orientation. The whole system pivots on a high quality 360 degree swivel ball on a wide circular base. It’s a simple design, but remarkably sturdy. In fact, the unit will easily support weights up to 300lbs. During my last few weeks with it, I never felt the system move underneath me, even when I put it on a hardwood floor.

I was concerned with the Stealth Workout Board when I first got it, thinking that all these kinetic movements would cause my forearms to slip, giving me a rubbing burn on my skin, or that I’d slip off and hurt myself. After weeks of near daily use I haven’t felt anything of the sort. The ball and hinge joint underneath moves smoothly and without any sort of plastic-on-plastic rubbing, the material doesn’t become slick even when you start sweating, and I never felt like I was going to slide off the side no matter how much “banking” I did while “flying” on the board. I’ve used other planking boards and found myself returning them because I was sure I was going to break my neck, but this one is gonna stay in my workout rotation.

It’d be easy enough to use the Stealth Workout Board as a static core planking platform, but that really defeats the purpose. It’s not much higher than a standard plank, but it’s the application that makes this board different than just holding yourself in the planking position. The Stealth Workout Board ships with two free games on their app that you are free to check out before you even buy the board. The first is a space game called “Galaxy Adventure” that has you blasting asteroids, playing whack-a-mole with planets, twisting to pierce a planet’s center, and other activities that make the entire workout dynamic. These are done to a timer that you set, even allowing you to increment up every day until you are planking for minutes at a time. Rather than just shakily holding yourself in position, you’ll be focused on reacting to action on the screen. Normally holding a plank position for even just 60 seconds is agony, but here I found myself all but ignoring the time until the last few seconds. 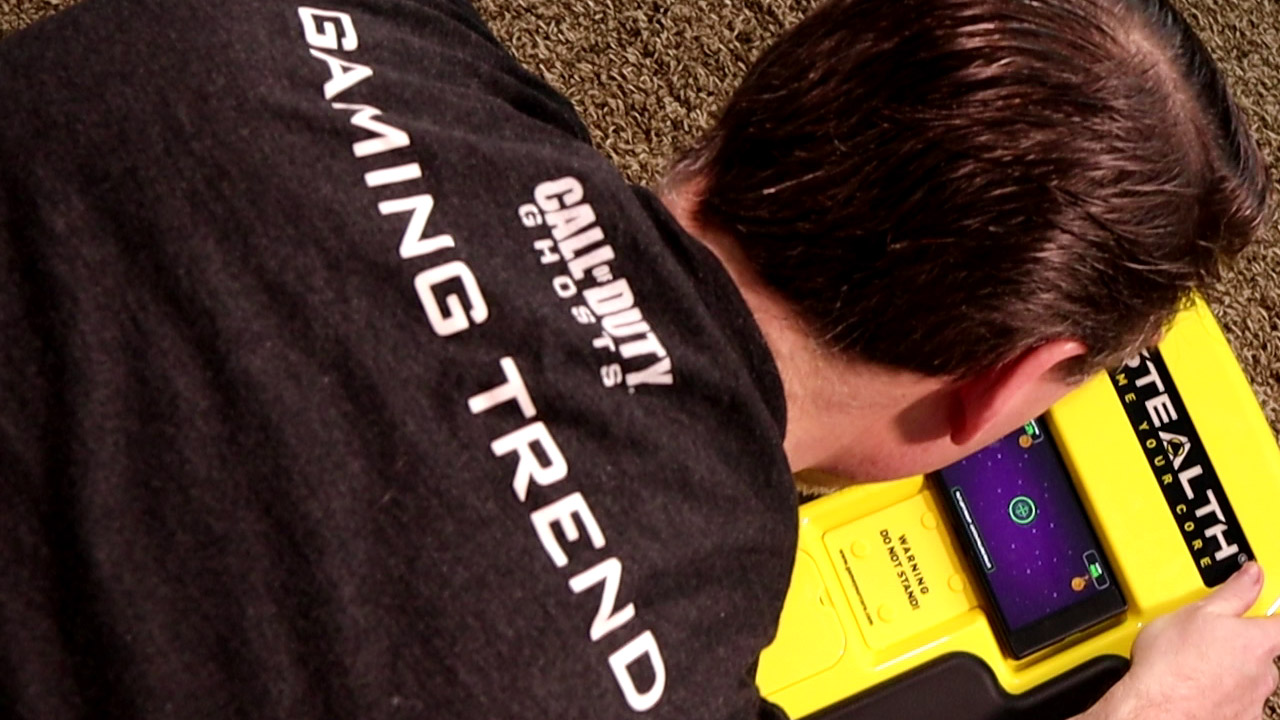 The games are simple but incredibly effective.

Speed Gliding, the second free game, puts you into a hang glider and has you collecting parachuting crates, dodging trees, and even putting up with an angry dragon as you navigate through rings and other obstacles. It’s a great beginner game as it doesn’t have as many ballistic motions as Galaxy Adventure, though both of them will give you a solid workout.

Beyond the two freebies, the Stealth Fitness app has 10 “premium” apps as well. These are tucked behind either a yearly subscription at $24.99, or a monthly subscription at $3.99. The team continues to add new games and challenges (they added a new one while I wrote this!), so the subscription goes towards continued development. The games all use the gyroscope portion of your phone to track motion on the board, translating that to a Pac-Man like game where you dodge robots and have to twist left and right when you get caught, a Racquetball game where you return a bouncing ball by positioning yourself to intercept, and an archery game that has you positioning the bow and arrow over targets for points, just to name a few examples. Each of them are fun in their own ways, but the Mini Golf Mania minigame is my personal favorite. You have to guide the ball through a series of wacky obstacles including pinball bumpers, moving boxes, and all sorts of other fun debris.

Beyond the 11 games, there is also a challenge section. This “multiplayer” mode lets you join challenges set by other players, create private challenges to share with your friends via a secret code, and even create local challenges that remain on your phone. The “single phone” challenges are great for sharing the app with your family members under a single account. All of these challenges focus on either a countdown workout which has you play the selected game for a specified amount of time, or an endurance mode where the timer counts up until you call it quits.

So the big question here is “does it work?”, and is it worth the $99 bucks? (the suggested retail price is $149, but it’s selling for $99 on the official page at the time of this writing) Like any other workout, the only way the Stealth Workout Board is going to be effective is if you stick with it, and tracking your own personal progress is a great way to keep yourself accountable and motivated. The app will keep track of your score, times, what games you’ve played, as well as tracking the total amount of workout time, your current ranking in the world, and even how long of a workout streak you’ve racked up measured in consecutive days. Am I going to have washboard abs after just six weeks like the website’s testimonials suggest? Well, after two weeks of solid use I can tell you this — my rectus abdominis (the ones in the center) are frequently sore, as are my obliques (sides), and I can feel my lower abs strengthening. I expected all of that. I didn’t expect that I’d see my lower back muscles improving, my shoulder and forearms strengthening, nor did I expect that my glutes would be on fire after longer workouts. I’ve spent more than $100 on equipment that doesn’t work half as well. Am I going to suddenly become a cover model for Men’s Health? I doubt it, but I’m happy with the soreness I feel after every workout. The gamification of such a simple exercise is yielding results, and in the end, isn’t that the only thing that matters?

You can pick up the Stealth Workout Board at the official site here, at Amazon, or wherever you get your workout fix, and comes with a 30 day money back guarantee. The app is available for Android at the Play Store, and for iOS devices at the Apple Store.

Build from remarkably sturdy materials, the board itself is an excellent addition to any core workout. The app does a great job of motivating and tracking your progress, though a one-time purchase option would be welcome. Either way, you can’t argue with results.

Ron Burke is the Editor in Chief for Gaming Trend. Currently living in Fort Worth, Texas, Ron is an old-school gamer who enjoys CRPGs, action/adventure, platformers, music games, and has recently gotten into tabletop gaming. Ron is also a fourth degree black belt, with a Master's rank in Matsumura Seito Shōrin-ryū, Moo Duk Kwan Tang Soo Do, Universal Tang Soo Do Alliance, and International Tang Soo Do Federation. He also holds ranks in several other styles in his search to be a well-rounded fighter. Ron has been married to Gaming Trend Editor, Laura Burke, for 21 years. They have three dogs - Pazuzu (Irish Terrier), Atë, and Calliope (both Australian Kelpie/Pit Bull mixes).
Related Articles: Hardware, Stealth Core Trainer
Share
Tweet
Share
Submit