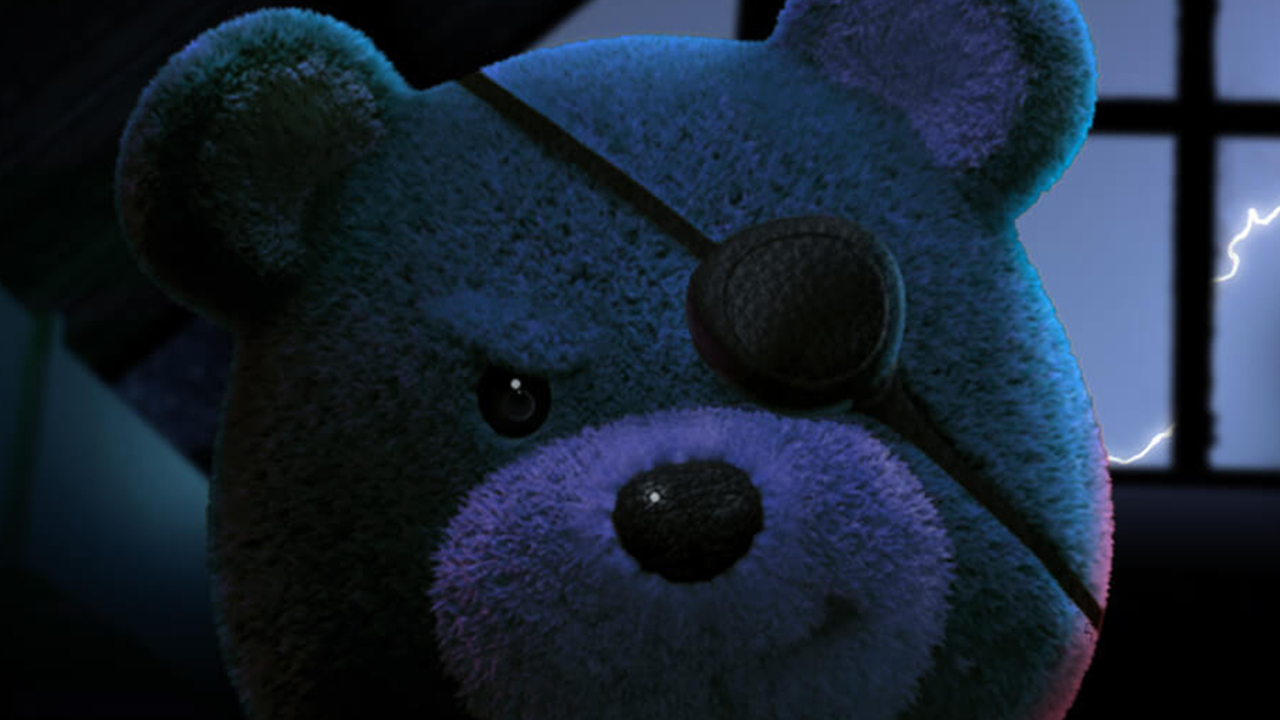 Here’s the situation – a teddy bear factory has been invaded by an evil bear named Frank. Frank is bent on taking over the world by freeing the “captive” bears that humans have cooped up in their homes, and he has a pretty serious axe to grind against Pandas for some reason. Let’s get into the virtual reality space and let the fur fly.

Frank’s furry army comes in a variety of forms. Garden variety teddy bear serve as Frank’s foot soldiers, but jumbo-sized bears using wooden crate tops as shields and wearing football helmets are the armored shock troops of the toy army. Sapper bears rolling on top of cartoon-style bombs and sporting headbands sneak up on you rather quickly. Some bears float in tied to balloons, but it’s the little bastards that shake up the soda bottles to use as projectiles that make me hate Frank’s little incursion.

Thankfully, you’ll have help. Channeling his best inner Ted Theodore Logan (from Bill and Ted’s for you youngins), you’ll have a little help from a stuffed panda named Buddy. Well, I say “help” but he’s most gonna stand there trying to free his panda friends while you do all the work, like the human stooge you are.

There are three modes in Sneaky Bears, spread across five levels each, and then punctuated with a three-stage boss battle at the end of the game. Survival mode gives you a pistol in your right hand and a shotgun in your left. Most bears take a single shot to drop, but the jumbo-sized helmet-wearing bears require a blast from the shotgun to remove their shield, and then a shot from either gun to finish them off. Fire mode switches things up, giving you a water pistol for your left hand. As fires break out in trash cans, you’ll have to multitask to put them out while fending off bear waves with your pistol. The final mode is Bomb mode. As you might imagine, bombs travel down conveyer belts towards a little pen of friendly bears. You’ll use your freeze gun to stop them as you cut down enemy bears with your pop-gun.

Each mode has five levels of progressive difficulty. Putting down all fifteen levels makes Frank angry enough to finally face you himself. In all, I was able to blow through all of the levels and the boss fight inside of two hours. The only real difficulty I had came from tracking of the move controller. I’m not sure if it was the lighting in my room, or if was glitchy controls, but I struggled with pulling a new gun off my left hip. This leads me to the controls for Sneaky Bears.

The game is a stand-in-place wave shooter using the PlayStation Move controllers. The only real controls are point and shoot, and reloading. In this case, you’ll reload by simply dropping your gun and grabbing a new one from your bet. The whole time you are using that gun, however, you have to keep the Move button (the large one at your thumb) depressed. Holding down the move buttons constantly is a little cumbersome. I prefer simply drop my guns to my waist for reloading — something developer War Ducks could patch in, if they are so inclined. That said, it’s fun to chuck my weapons at incoming furry foes to stun them while I drop my weapon and drag a new one out from my belt.

The game has an MSRP of $19.99, which feels a little stiff for just two hours of game time. There are local leaderboards for score comparison, but they aren’t online leaderboards like Rush of Blood or other wave-based shooters. Sneaky Bears is a very easy introduction to VR without jumping fully into room-scale madness, but this Build-A-Bear feels a little under-stuffed for the price.

If there’s a star of the show, it’s actually antagonist Frank. The writing team at War Ducks have absolutely nailed his evil personality, being part sociopath and part prankster, with a heaping helping of movie quoting madness, Frank pops up frequently and always has something funny to say. I won’t ruin it, but the final level has one of the best one-liners that had everyone in the room laughing.

At its core, Sneaky Bears VR is a wave-based shooter, but that doesn’t account for the excellent writing and genuinely funny premise. Sure, it’s a little short, but if you own a PSVR, this is a great title for younger audiences, as well as VR newcomers.

Ron Burke is the Editor in Chief for Gaming Trend. Currently living in Fort Worth, Texas, Ron is an old-school gamer who enjoys CRPGs, action/adventure, platformers, music games, and has recently gotten into tabletop gaming. Ron is also a fourth degree black belt, with a Master's rank in Matsumura Seito Shōrin-ryū, Moo Duk Kwan Tang Soo Do, Universal Tang Soo Do Alliance, and International Tang Soo Do Federation. He also holds ranks in several other styles in his search to be a well-rounded fighter. Ron has been married to Gaming Trend Editor, Laura Burke, for 21 years. They have three dogs - Pazuzu (Irish Terrier), Atë, and Calliope (both Australian Kelpie/Pit Bull mixes).
Related Articles: Sneaky Bears, VR
Share
Tweet
Share
Submit