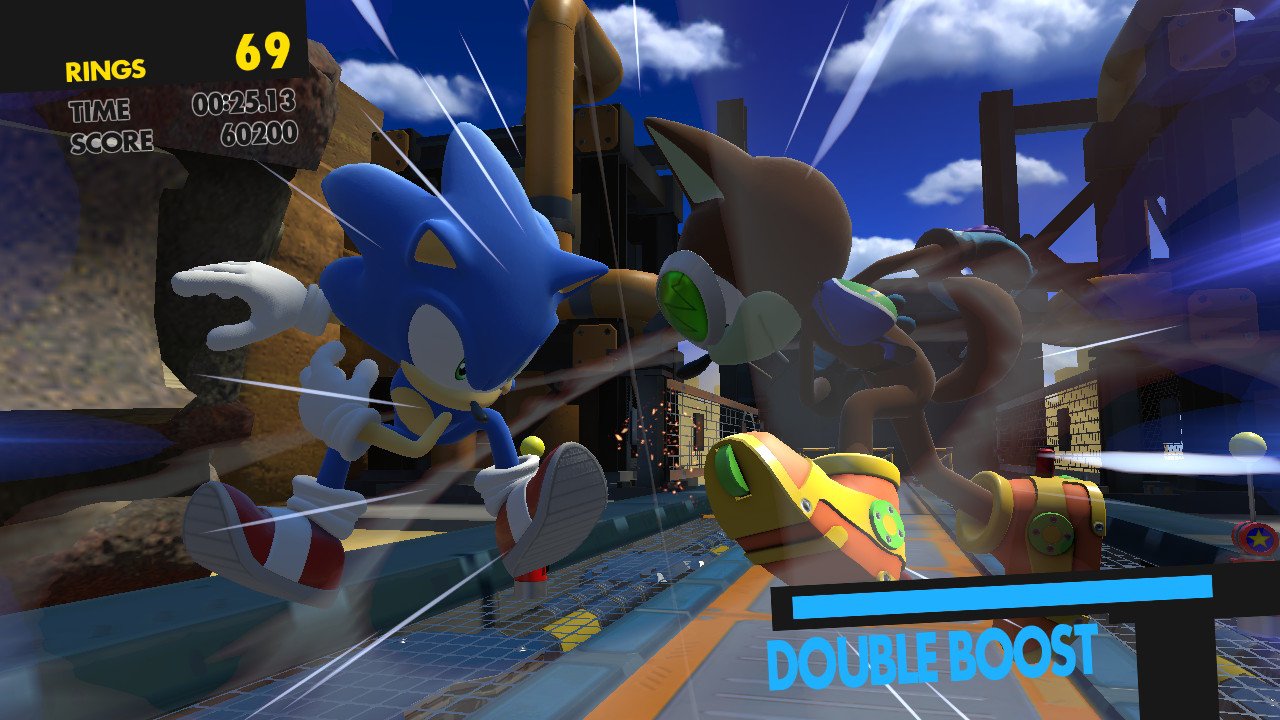 It’s been a pretty cool year for Sonic the Hedgehog: the critically lauded Sonic Mania launched this summer, and he’s gotten some great PR with his Twitter account and Sonic Boom television show. Back when Mania was revealed, Sega also announced a 3D Sonic game which would be developed by Sonic Team. With Mania revolutionizing the 2D classic gameplay of Sonic the Hedgehog, will Sonic Forces do the same for its 3D series?

Sonic Forces is comparatively darker to recent entries of the series, with Doctor Eggman obtaining the powerful Phantom Ruby (as well befriending the ominous Infinite) and thus using its powers to defeat Sonic and his friends. After an introductory (and at this time obligatory) Green Hills stage, we begin our game with Eggman’s forces ruling the entire world, with only a few resistance fighters remaining to defeat the enemy. In lieu of the missing Sonic the Hedgehog, a brand-new Avatar (which you create) joins the fray to fight back, and in the meantime, Classic Sonic (from Sonic Generations and more recently Sonic Mania), assists on the sidelines with Tails.

While trying to be overly serious, Forces’ story seems too melodramatic to be dark and gritty, but at the same time it oddly works because of the lighthearted nature of the series. If you’re like me and lament the tragic passing of the Archie Sonic comic (which switches from being super serious to being family-friendly fun), you’ll adore this storyline. It basically depicts E-rated genocide (as the Avatar’s backstory makes them the sole survivor of a massacre from Infinite), as well as themes of war and revolution. It does what the Shadow the Hedgehog game tried to do but sticks the landing. Modern Sonic does reappear early in the game, and even though the world is on the brink of destruction, he still manages to crack some chuckle-worthy one-liners in the midst of it all. I like the seriously goofy atmosphere the game provides, and if IDW does follow through on their promise to continue the comic, I’d love to see an adaptation of this in print.

While we’re on the topic of story and characters, the game’s strongest point lies in the original character Avatar. The Avatar creator is surprisingly robust once you unlock items in-game, and offers a slew of different items where you can dress up your character. While you can select clothes and skin… er, fur color, you can also pick your species, which grants additional bonuses depending on the type. From the dog that retains rings upon death to a bird that can double jump, each species has a different advantage that can prove to be essential in the endgame. Story-wise, the Avatar feels like an OC self-insert, and Sonic has an odd obsession of calling him “buddy” every other sentence. Seriously, Tails is there and isn’t offended in the slightest.

While the story has an inconsistent yet entertaining tone, the gameplay is just plain inconsistent. There are three types of main stages in the game, as well as another that merges two types together: You have the Boost gameplay of Modern Sonic, 2D gameplay with Classic Sonic, and slower-paced 3D stages with the Avatar (with some stages combining Modern Sonic and the Avatar in this weird amalgamation of stages). While they do run at a decent pace, the Switch version is technically the worst performing of the multiplatform releases, offering 30 FPS compared to the other versions’ 60. It’s not broken, and you do get the benefit of playing this on the go, but it isn’t as pretty as the other consoles. As such, the textures look a bit jagged and rough, and you can notice the difference when playing the game docked. While they’re not horrifyingly bad, the graphics might turn off players who want a silky smooth Sonic experience (not that the other versions will guarantee that, however).

The main issue with Sonic Forces is that it doesn’t know how to control its speed levels. Modern Sonic levels are full of the blistering speed we’ve been used to since 2006, while the classic Sonic stages (which play like the Genesis era of Sonic the Hedgehog) are slow as molasses compared to the former. The modern stages are great, and I wish there were more of them. The Avatar stages, on the other hand, are a mix of modern and classic styles, which I enjoyed the most, since they allow for elements of exploration within a stage as well as some sections of speed. You can also utilize game-breaking weapons as the Avatar, which can range from a flamethrower to a cube that will turn all mook enemies into blocks which you can destroy for rings. It was fun to abuse these powers, and I really enjoyed playing through them, even if I had to retry a couple of times due to the camera (which is serviceable, but does have the habit of lagging behind faster sections).

However, while he played a big role in Sonic Generations, Classic Sonic seems really out of place, in the narrative and in gameplay. The placement of his stages are just weird and the pacing suffers immensely as a result; the physics aren’t enjoyable and Classic Sonic just slows down for no adequately explained reason on some ramps. I tolerated the 2D stages in Generations, but I wasn’t thrilled to play them in Sonic Forces. Within the story, he shows up seemingly out of nowhere (though for those who completed Sonic Mania might connect how the two games are related due to his role). Even Tails has an odd attachment towards Classic Sonic after his universe’s Sonic apparently dies, so the chubbier hedgehog acts more of a rebound character than anything else. By the end of the game, his presence doesn’t really account for anything of value, so the whole “two Sonics” shtick seems a bit overplayed and trite in this case.

Stages with Modern Sonic and the Avatar are also a bit disappointing, as they mesh both styles of the two in a weird mixture. I kept boosting by accident in tricky platform sections, which caused the duo to careen off a bottomless pit. However, whereas the Classic Sonic stages were unneeded, these stages were a mix of joy and disappointment. I didn’t mind their inclusion, and I wish the game had focused solely on the modern styles rather than taking a break with classic Sonic stages. The fact that the game is a little under three hours long with thirty stages makes me believe that the Classic Sonic stages were added to pad the game, but even if it were cut by a third, I’d probably enjoy the smoother pace that would have occurred had the classic stages been excised.

Still, I can’t help but say I had a lot of fun with Sonic Forces, at times as much as Sonic Mania (though to be fair, I love the 3D games, so I could tolerate a lot more than the average fan). The music (like most Sonic games) is a treat here, and fans of electronic music and Eurobeat will find a few tracks to bob their head to. Of note is the main theme, Fist Bump, which is sung by a member of Hoobastank and really emphasizes the theme of friendship in the game. It helps that the track is a pretty hard-rocking tune (and the first time it’s used in a Modern Sonic/Avatar stage, I had chills). When the game’s speed works, it’s a blast to play, and even made me feel giddy in a few sections.

Sonic Forces may be a misstep from this year’s Mania, but it’s still an enjoyable title. While it suffers from a host of problems with pacing and performance, it still is worth a weekend rental with its surprisingly entertaining plot and great music.

Elisha Deogracias is an aspiring accountant by day, freelance writer by night. Before writing for Gaming Trend, he had a small gig on the now defunct Examiner. When not being a third wheel with his best friends on dates or yearning for some closure on Pushing Daisies, he's busy catching up on shonen manga and wacky rhythm games. Mains R.O.B. in Smash. Still doesn't know if he's a kid or a squid.
Related Articles: Sonic Forces
Share
Tweet
Share
Submit