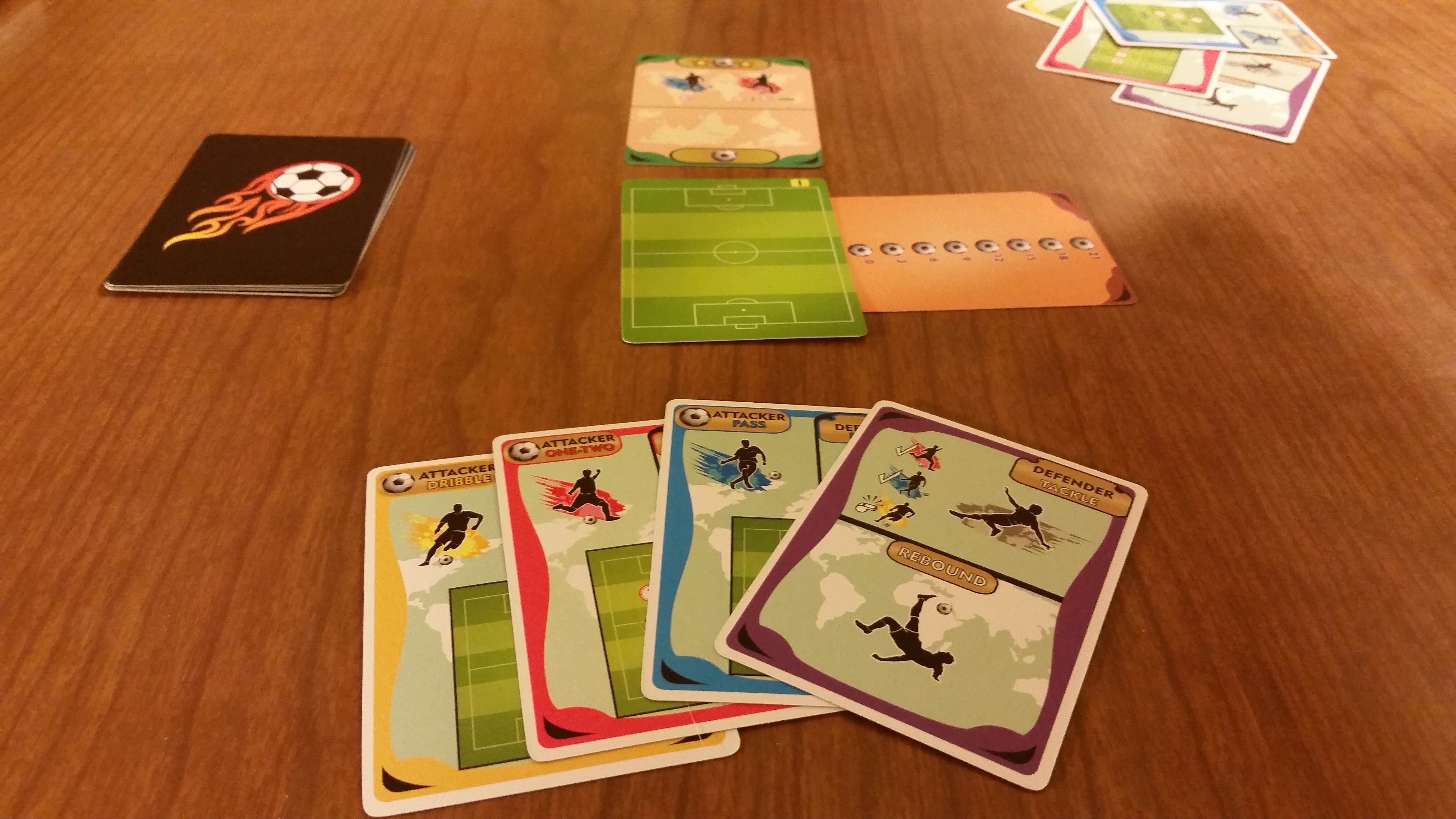 If there’s a genre where board gaming still takes a backseat to digital platforms, it’s in the world of sports games. While I’d much rather play a game of Second Season Football to Madden any day, board gaming will never be able to simulate all the working parts of a digital masterpiece like Football Manager. When it comes to casual games though, it seems many board games fall into the trap of dumbing down the sport to the point where a fan may feel like their intelligence has been insulted. Enter Soccer 17, Jack Darwid Games latest card game that aims to run through a soccer match with 17 cards in roughly 17 minutes.

Each player in Soccer 17 starts the game with just four cards. You don’t need to be a soccer expert to understand these cards, but it’s great to see the game include the basic tactics of soccer. Players each select one of these four cards per play. The cards all have double uses. On offense, they simulate dribbling, passing, one-twos, and a special rebounding action. Correspondingly, the cards have defense skills of pressing, blocking, anticipation, and the special tackling action.

There’s not much to the components, but the game play certainly has some meat to it.

Once each side has selected a play, players compare cards. If you’ve ever seen a game of Tecmo Bowl played, then you will understand the concept here. The defense neutralizes a particular offensive play that is on the same colored card. If the defense correctly guessed the card that corresponds with the offensive play, then the defense has stolen the ball and possession changes sides. If the defense failed, the offense gets to complete the action shown on the card that corresponds to the position on the field.

Actions are determined by not only which offensive card won the matchup, but also by where the ball is currently located on the pitch. The offense has three possible options. Blue arrows advance the ball closer to the goal. Red targets allow a shot attempt, while stars add bonuses to shots. The stars also have some tactical decisions as the offensive player must decide where the star bonus will be applied. If the player chooses a passing bonus, then a shot off a pass will be more likely to score than a shot from a one-two. Ideally, passing and dribbling combine to build up an attack while one-twos provide the greatest chance of a payoff. It’s soccer strategy 101 in a nutshell.

Positioning matters in the this game. The blue passing card allows you to get into position, while the one-two card can create a deadly attack inside your opponent’s box.

You may think that selecting from a few cards may not make for much of a cat-and-mouse game, but it does. There’s a tremendous about of subtlety the game that brings out all the tension of an actual soccer match. The defense knows the offense’s ideal attack as well and will do whatever it can to stop it. It’s hard to guess correctly as the offense advances the ball, but it becomes significantly more difficult once the ball is in the opponent’s half. To shoot, the offense must choose between one-two and pass. There’s no shot option on the dribble card, and that raises the odds of the defense stopping an attack cold.

This is where the use of the special cards come into play. The purple card allows the defense to make a saving tackle, which stops both one-two and passing plays. While it may seem that guarantees a stop, the offense has a counter. Even though it can’t shoot in the box off a dribble, the offense can still select it to possibly add another star to its attack. Should the defense select tackle in this case, the offense scores a penalty (or a free kick if outside the box). It may take a few plays to appreciate this, but the game has a great checks and balances aspect to it. Unlike our government though, this checks and balances system actually works.

Once the offense is ready for a goal attempt, the result of the shot is determined by a card draw. The defense holds up six cards, one of which is the goal card. The offense gets to draw cards equal to the number in the red target at the time and area of the shot as well as the added bonuses from any stars collected. Since the maximum of stars and red target numbers is two, the offense could generate four draws from the six cards, giving it a great chance to score. If missed, the offense now has the option to use that special purple card. On offense, the special bonus is a rebound shot, which allows for one extra card draw. This special card can only be used once per half, so choosing when and whether to use it on offense and defense is critical.

A better built up attack will increase the odds of scoring that elusive goal.

There’s a lot going on in just 17 cards. So much so that it will take a few plays to get it down correctly, especially when keeping track of the ball and time. Both are handled with one card that slides under the card representing the pitch. As the ball moves around, the card is moved to show where the ball currently is. The timer moves under the pitch in 3 minute increments. I will say that the game lasts shorter than the advertised 17 minutes, but much of that will be spent moving the ball and timer about. My first plays definitely had some added stoppage time!

With its surprising depth and quick play, the game may make it to the table frequently. If it does, it’ll need card sleeves. The card quality is great, but the black backs were chipping after just a couple of sessions.

Keeping the game fresh isn’t a problem, as rules for league and cup games are included. Jack Darwid Games also plans to release eight national team cards to provide some individuality to games.

Soccer 17 does a great job of blending the feel of soccer with a casual gaming experience. Fans of soccer will love the tension and strategy involved, but it’s accessible enough that non-footie fans to enjoy. It may take some time until players have all the aspects working smoothly, but the payoff is worth it.

Soccer 17 does a great job of providing a quick, entertaining game without leaving out the tension of an actual soccer match. There's a genuine thrill is seeing your build up end in a goal, but it'll take a few plays before you're comfortable with the mechanics.