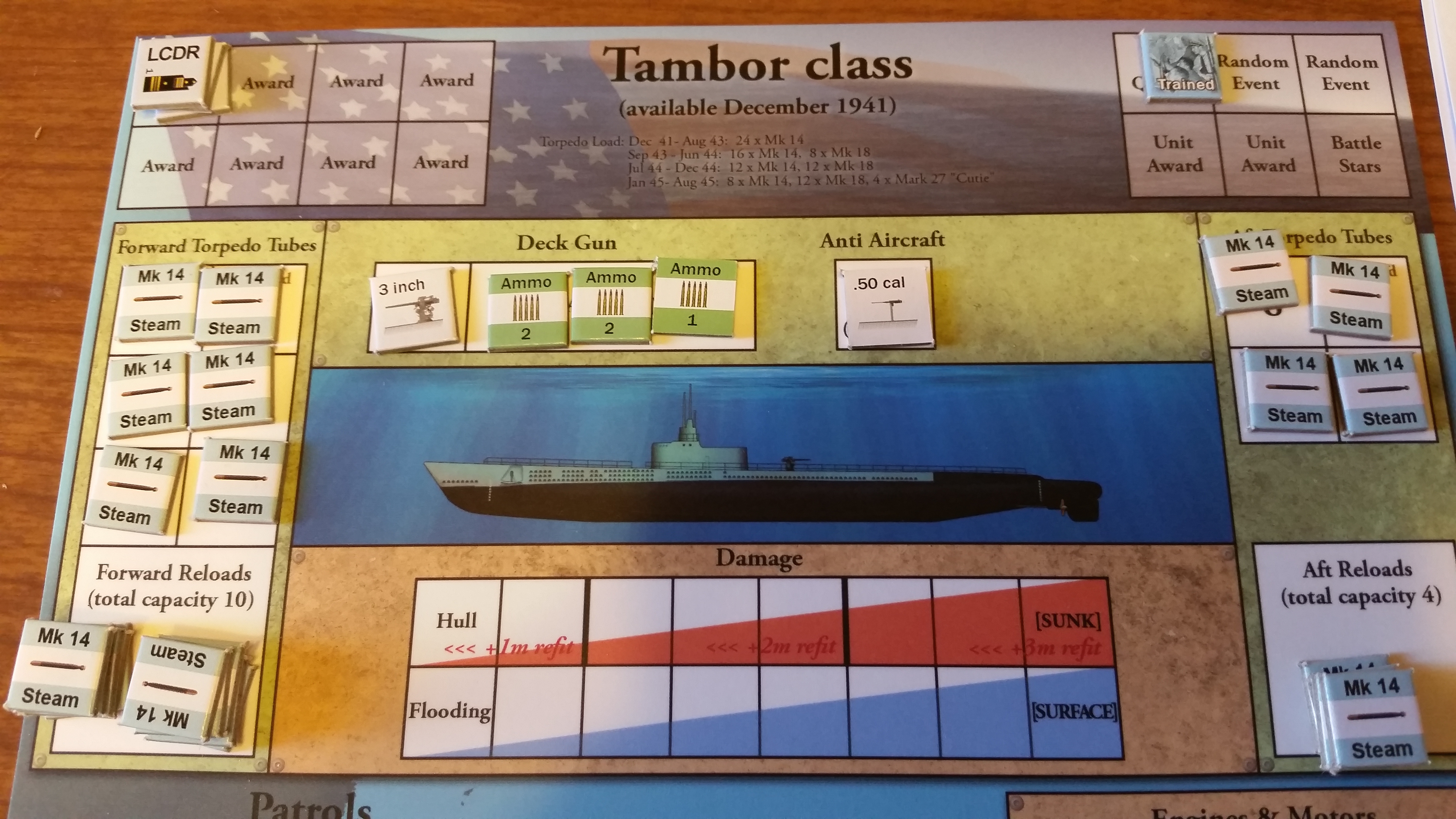 Those familiar with Word War II know about Germany’s infamous U-boats and their relentless attacks against Allied shipping in the Atlantic Ocean.  What’s not as well known is the underwater warfare in the Pacific and the American’s use of submarines to disrupt Japanese shipping. Consim Press follows up its success with The Hunters game on U-boat warfare with its release of Silent Victory, a solitaire game where a player commands an American submarine during the Pacific Theater of World War II.

The premise is for players to sink as much tonnage of enemy shipping as possible before the war ends or the player’s captain persona becomes captured or killed. Submarines go out on patrol, return to port for repair and refit, then go out on patrol again. The game may appear daunting with its wealth of charts, tables, and markers, but its excellent rulebook outlines the goals and flow of the game very well.

Understanding what to do may be simple, but getting the details down will take a little effort. Before your first tour even begins, there’s a multitude of options available. Several American submarine types are included and directly affect when you enter the war and how effective your attacks are. The outdated Narwhal allows players to be in the war from its outset in December 1941 while the powerful Balao comes in much later. Players can then end up in either the Northern or Southern Pacific theaters, and the patrols in both are randomized by dice rolls. There’s even an option to recreate the career of famous submarine captains, which gives players the option to run a short, scripted campaign. The replay ability of these options is staggering as even playing the same submarine twice is likely to result in a completely different campaign.

There are no turns in the game. Instead, a submarine spends a month patrolling a particular area of the Pacific. Patrol progression is tracked on a chart. As the submarine advances through its patrol, it has an opportunity to encounter different Japanese ships. These encounters range from catching a lone freighter that’s easy prey to a massive capital ship with considerable strength. Submarines can even be attacked by aircraft or other submarines turning the course of its patrol. Should a submarine survive its patrol, it returns to its home base where it will stay in port a month or more, depending on damage it suffered on tour.

As a submarine begins its tour, it has little idea what it will encounter. Each area patrolled has a different chart where a dice roll determines whether there’s an encounter or not. One of my patrols through the Solomons ended without a single encounter. A second patrol in the same area produced four different battles and a silver medal. A patrol’s success depends on sinking at least one ship or completing a mission, such as delivering a passenger to a destination along the patrol. Player captains have the chance for medals if they sink multiple ships. I earned my silver medal for sinking four enemy ships during a single tour. As successful patrols add up, players can roll for crew upgrades or even promotions, while repeated failed patrols can result in being stripped of command and an ignominious ending to your naval career.

Success or failure ultimately lies in your ability to sink the enemy. When patrols begin, submarines are fitted with a finite number of torpedoes and ammunition to sink ships. In a way, this adds a little resource management to the game. If your first encounter is against a light freighter, you have to weigh whether to maximize your chances of a hit, and a successful patrol, by sending a full load of torpedoes, or save your firepower on the chance you’ll run into a heavy tanker later. Adding to your decision is the fact that there’s no chance of scoring a hit, especially in the early game. American torpedoes were notorious for an array of failures. Nothing is more disappointing than scoring four hits only to see all of them end up being duds.

Yes, the game uses a lot of charts, but they are easy to use and don’t bog the game down.

Captains can influence their chances of a hit through numerous options. Night attacks have advantages over day attacks. Crew skill and the type of torpedo used are some of the ways dice can be modified during attack, but range is the biggest factor. Close range shots can increase your odds of a hit by 30% over a long range strike. It’s a risk reward decision though. Rarely will a captain come across a lone ship. More often supply ships will have armed escorts. At long range, a submarine’s chances of hit and run attack increase. Closing in increases the odds that the escorts will detect the submarine. In fact, at the closest range, an escort could detect and fire before a submarine has a chance to attack. Once detected, the submarine becomes the hunted and enters a deadly cycle.

A detected sub is attacked with depth charges. These can deal damage to crew, the hull, or different components of the ship. Submarines don’t automatically escape after being detected and attacked. The cycle repeats and the sub must go undetected before it can get away. Silent Victory allows captains to target escorts as well as supply ships. A damaged escort is less likely to detect a sub than an undamaged one. The game may seem monotonous in that it’s just a repeated series of patrols, but the decisions each captain faces make it a tension filled experience. Torpedo supplies, quality of opponents, damage to your sub, and even how far along you are in a patrol all combine to make each encounter a deep experience.

A fully loaded Tambor class submarine is ready for patrol.

Granted, there are some aspects of the game that may not appeal to everyone. Even once the general flow of the game is down, you will be consulting a never ending series of charts to determine where a patrol will be executed, what ships you encounter along the way, whether damage is dealt and how much, and even how your own damage is determined. Rules are included to generalize some of the decisions, which speeds up gameplay. Even using the charts, I found the system flows well enough that your checks run fairly quickly as you get used to where to find them. Additionally, the subject matter isn’t as well known as the Battle of the Atlantic, narrowing the audience that may want to give it a try.

Neither of those detract from the fact that this is a very good game. It does a great job of building the tension of a submarine patrol. There’s a great sense of accomplishment when your captain earns his first medal and disappointment when your ship is lost at sea. Silent Victory combines a smooth system with deep decision making and vast replay options to create a game anyone interested in submarine warfare should give a try.

Consim Press follows up its successful The Hunters game with another great solitaire submarine experience. Battles are packed with tension. Career play, a wealth of submarine options, and the depth of missions will keep things fresh. If you don't mind charts guiding your way, then this game is one of the better solo gaming options available.